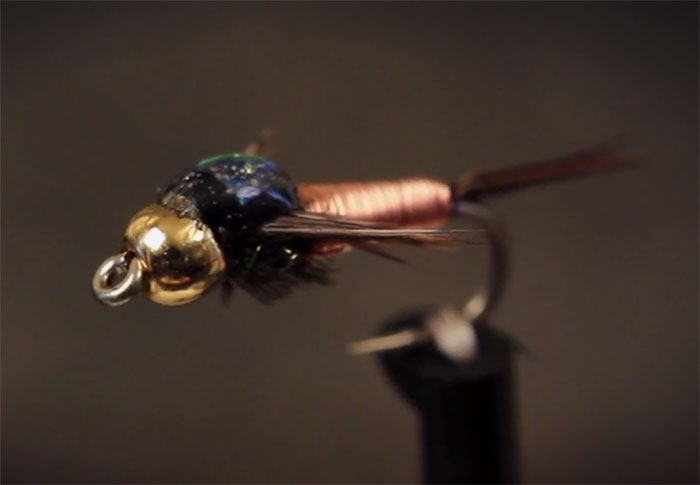 In 1993, John Barr began working on the nymph pattern that was to become the Copper John, a process that would take three years. After several design and materials changes, he declared his invention finished in about 1996. Since its introduction in the mid-1990s, the pattern has become one of the best-selling nymphs around the world, and for good reason. The fly simply catches fish. Although it doesn’t imitate any one mayfly nymph too specifically, it suggests a whole range of larvae. Plus, it sinks like a stone and has just enough flash to draw trout from several feet away to take a good look. You can fish the Copper John alone, as part of a tandem nymph rig, or as a dropper of a grasshopper or other large dry fly.

In this great video from Tightline Productions, Tim Flagler offers easy-to-follow step-by-step instruction for tying the Copper John. He notes that some tiers might be put off by the number of materials, but the fly doesn’t require any really fancy skills to tie. As usual, there are a couple of tying tricks that will simply make you better at the vise: an easy way to get splayed-biot tails perfect and tips for using epoxy.

4 thoughts on “Classic Video: How to Tie the Copper John”