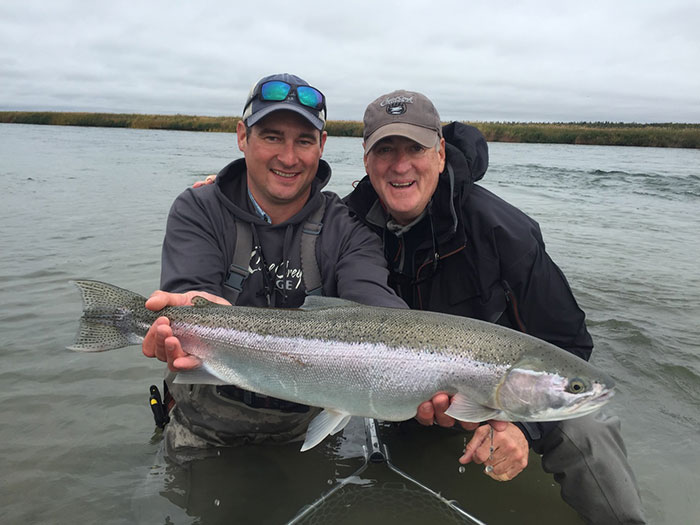 Alaska is blessed with an incredible wealth of sport-fishing opportunities—from easy-to-reach streams that flow alongside highways or right through town, to remote waters accessible only by floatplane or raft. There’s also a wide array of target species to choose from. Although most anglers are focused on catching one or more of the five species of Pacific salmon, which provide both a valuable food resource and an incredible test of a fisherman’s skills, there are also lodges that cater to those who dream of catching trophy rainbow trout, steelhead, and northern pike.

With so many choices of locations, species, and seasons to choose from, creating a “bucket list” of dream fishing destinations in Alaska is a challenging task. I spent three years as a guide at three different lodges in the Last Frontier, and I’ve been a fishing journalist for more than two decades. In that time, I have visited, written about, read about, and heard about dozens of locations, lodges, and waters—from Ketchikan to Kotzebue and everywhere in between. Based on that experience, here are my four angling dream destinations, those locations where I believe an anglers has the best chances of enjoying a remarkable angling adventure and potentially landing a fish of a lifetime.

Salmon: Crystal Creek Lodge
Located on the banks of the famed Naknek River southeast of King Salmon, Crystal Creek Lodge is at the epicenter of some of the best fishing in the world, offering opportunities to catch all five species of Pacific salmon in one trip. The Naknek itself sees average runs of some five thousand Chinooks and three million sockeyes, and just a short float-plane journey away are the Alagnak and Nushagak Rivers, which are home to huge numbers of chums and kings. Crystal Creek also operates the remote Yantarni Salmon Camp, situated on the 125 miles away on the Alaska Peninsula, which offers a truly wild outpost angling experience during the late-season coho run, from late August through October. The tent camp sits along a freestone stream just a mile from the salt, so the fish caught at Yantarni are fresh, powerful, and prolific.

Angling writer Reid Bryant, who has visited Crystal Creek Lodge several times, says that “there is a scope to the solitude on some of those remote streams that can be intimidating for anglers, as the experience allows you to rub up against a wildness that is rarely available outside Alaska.” He recalls fishing with a pair of anglers who spent an entire day working just two hundred yards on one of those fly-in-only waters and never stopped hooking up with salmon and Dolly Varden. By the end of the day, they had stopped counting fish, feeling that the magic of the experience went far beyond anything that a number could quantify.

Rainbow Trout: Rainbow River Lodge on the Copper River
Fly-fishing for rainbow trout in Alaska usually involves fishing near the bottom with egg or leech patterns. In fact, a fellow guide at Rainbow River Lodge once suggested that our motto should be “We fish for rainbows, therefore we dredge.” But the Copper River, which flows into Lake Iliamna from the south, offers something different: clear water and great dry-fly fishing. Before the Sockeyes show up in early July, the Copper fishes much like a river in Montana. . .only the average trout is much bigger. The Copper is a bug factory, producing the largest stonefly hatch I’ve ever seen, as well as blanket hatches of caddisflies and mayflies that bring even big fish to the surface.

When the salmon arrive, the dry-fly fishing shuts down, but the huge, silvery lake-dwelling rainbows begin to migrate upriver in anticipation of the “egg hatch.” The single largest rainbow I’ve ever cast to—I estimated the fish at 34 inches—was holding in the middle of a pod of sockeyes in a deep hole on the Copper. From late August through September, very large trout are caught on Flesh Flies, Egg-Sucking Leeches, and other big streamers. This combination of early-season technical fishing and late-season hog hunting make the Copper River a rainbow-trout fisherman’s paradise.

Steelhead: Alaska’s Boardwalk Lodge
Southeast Alaska is home to several legendary steelhead rivers, such as the Tsiu and the Situk, but for sheer number of opportunities, it’s tough to beat Prince of Wales Island, which features some 85 streams with documented steelhead runs. Although the number of fish in each river may not great, most rivers are short—which concentrates the steelhead in the best lies—and anglers get shots at fish that may be just hours or minutes from salt water. Plus, the island’s network of roads makes many of these waters easily accessible, and wading is rarely difficult.

My friend Andrew Pierce, a Vermonter who had his first-ever steelhead experience on Prince of Wales Island, says that his guide from Boardwalk Lodge found cruising fish in the very first stream they scouted. Swinging a Lady Gaga streamer with a single-hand 8-weight rod, Pierce hooked up and found himself unprepared for the battle:

There is no way to prepare you for that take and fight. I stood there in La La Land, in complete awe of the strength of this steelhead, until I heard my guide yelling at me to start running to keep up with my backing.

After a tough fight, Pierce landed the 35-inch beauty above, making his first steelheading trip—and his first trip to Alaska—a memorable one. 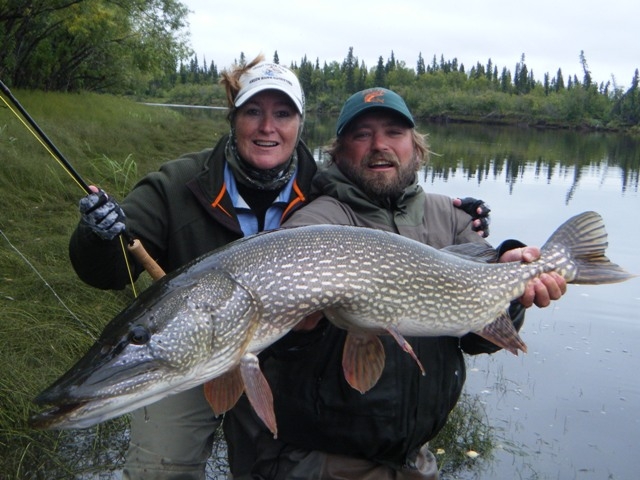 Cinda Howard’s astounding 50-inch pike is why she keeps going back to the Innoko.
Photo courtesy Cinda Howard

Northern Pike: Midnight Sun Trophy Pike Adventures
Although northern pike are considered a destructive invasive species in South Central Alaska—where they have caused a massive decline in rainbow trout in some lakes—Esox lucius is native to most of Alaska. For those anglers who seek trophy pike in the forty-to-fifty-inch range, the Yukon River drainage in the western part of the state offers the best shot. Midnight Sun Trophy Pike Adventures operates from a 67-foot houseboat that offers access to some 350 miles of River on the Yukon and its tributaries, such as the Innoko, which provides near-perfect pike habitat: cool, slow-moving water; an unlimited food source; and very low angling pressure.

Cinda Howard, a fly-fishing guide from Arizona has made two trips to the region with clients, and she can’t get enough. One her last trip, the six anglers in her party landed more than seventy-five pike over forty inches—an experience she calls “one of the coolest things I have ever done.”