Tomorrow, a host of anglers, conservationists, and business owners will take to the podium in the nation’s capital to participate in an event about how we must protect the Everglades. The America’s Everglades Summit will feature two days of speeches, presentation, panels, and Congressional meetings focused on how best to preserve a region that is both a national treasure and a vital part of a complex ecosystem.

Orvis Chairman of the Board Perk Perkins will be on a panel entitled “Why it matters: the Everglades as an economic engine” at 1:15 tomorrow. Moderated by NPR reporter Jessica Meszaros, the panel will also include: 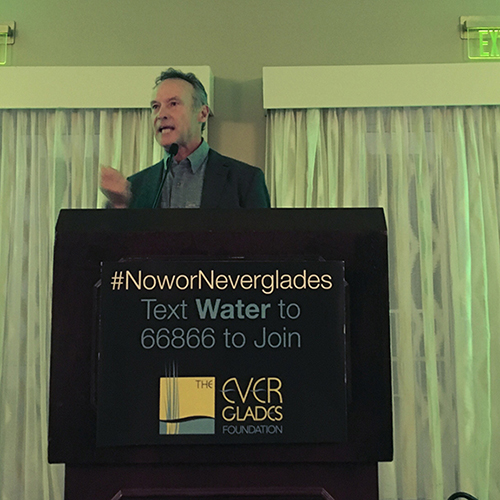 Perk Perkins expounds upon Orvis’ support for the #NowOrNeverglades campaign in January 2017.
Photo by The Everglades Foundation

On Wednesday, the scene changes to the halls of Congress, as meetings will be held in both chambers to educate legislators about the problems and possible solutions.

Why is this summit being held now? The Everglades and the Florida coastal system, one of the world’s most remarkable ecosystems, is on the verge of extinction. Home to hundreds of species of birds, mammals, fish, reptiles, amphibians, and plants, and more than 70 threatened and endangered species, it’s the source of water for millions and gives life to Florida Bay and the Florida Keys.

Historic water flow has been altered, discharging billions of gallons of freshwater from Lake Okeechobee into the St. Lucie and Caloosahatchee estuaries, interfering with the balance of fresh and saltwater. This imbalance has led to massive blue-green algae blooms, which suffocate seagrass and are toxic to wildlife, pets and people. Meanwhile, the redirection of freshwater has left South Florida to suffer drought conditions and a massive seagrass die-off.