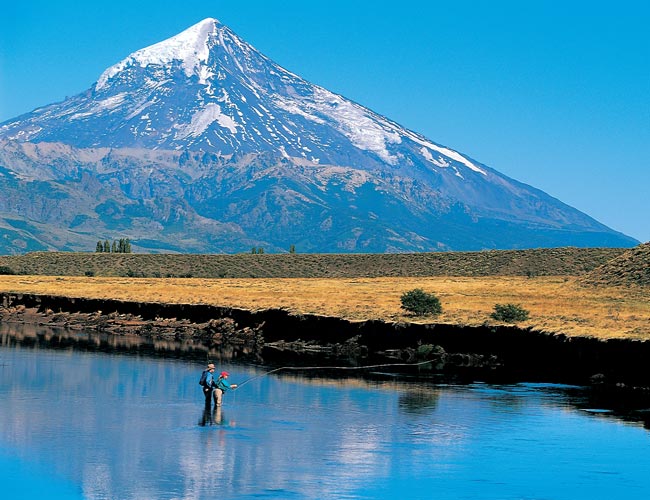 An angler casts on Rio Malleo, as the volcano Lanin looms in the background.
Photo courtesy San Huberto Lodge

Asked to create a hierarchy of fly-fishing dream destinations, many anglers would put Argentina up at the top. Since the late 1950s, when Joe Brooks first wrote about the rivers of Patagonia in the pages of Outdoor Life, American anglers have dreamed of making a pilgrimage to the bottom of the hemisphere to cast for giant, sea-run  brown trout.

There are three main fishing regions in Argentina: Patagonia in the west, Tierra Del Fuego in the south, and the warmwater river systems  from Buenos Aires north to  Corrientes and west to Salta.

Patagonia is so large and its waters so varied that anglers can find any kind of trout fishing they desire, from mountain lakes to small streams, and from spring creeks to powerful rivers. Tierra Del Fuego is home to giant sea-run brown trout up to 20 pounds. In addition, the warmwater rivers of the northern mountains and the eastern rivers and marsh systems hold freshwater dorado and pacu.

Patagonia Times Three
Western Argentina bears a striking resemblance to the western U.S., but without all the development. It feels as if you are in Montana of 50 or 100 years ago. There is no way that an angler can visit all the great trout rivers of Patagonia in a single trip, and the region can be easily divided into three destinations. 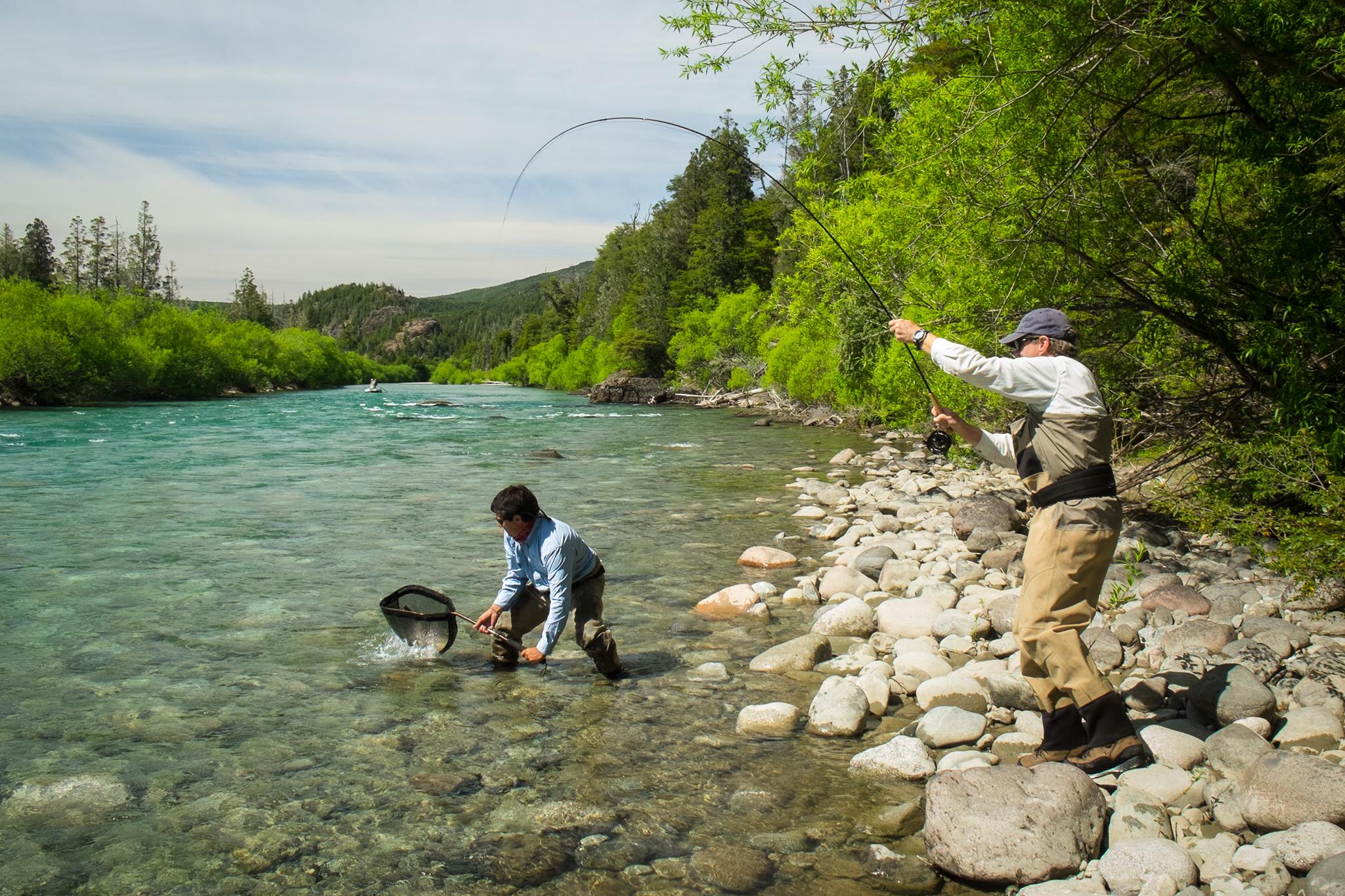 In the northern part of the Neuquen province, the small towns of Junin de los Andes and San Martin de los Andes are within striking distance of the rivers that first made Argentina famous–the Chimehuin, Malleo, Filo Hua Hum, Alluminé, and Collón-Curá, among others. (In Argentine Spanish, the ll is pronounced like the zh sound in azure, so Malleo is pronounced ma-ZHAY-o and Collón-Curá is pronounced KO-zhon KOO-ra.) There are many hosterias, lodges, and estancias in the region that cater to traveling fly fishermen.

In southern Neuquen is the city of San Carlos de Bariloche, located on the shore of Lago Nahuel Huapi in a mountainous region so striking that it’s known as the “Switzerland of the South.” The main attractions for anglers are rivers such as the Traful, Limay, and Pichi Leufu, Rio Manso and the many lakes of Nahuel Huapi National Park.

The Chubut Province is where Butch Cassidy and the Sundance Kid made their final stand. The country is more rural and has many large ranches or “estancias,” so amenities and public access points to the rivers are fewer and far between than other places in the north.  Fly fishermen head to Esquel to fish the Arroyo Pescado, the country’s premier spring creek, as well as the Rios Corcovado, Rivadavia , and Pico. Nearby Los Alerces National Park is the headwaters of the Rio Grande, which flows west into Chile. 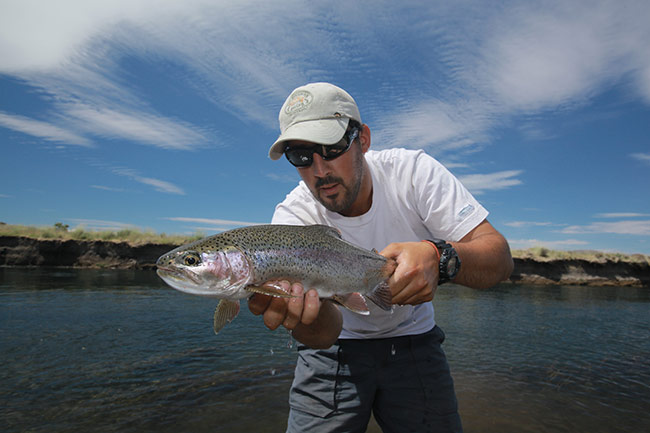 The Bottom of the World
If you enjoy fishing for anadromous fish or for large brown trout,  Tierra Del Fuego is paradise. Other than the best sea-run brown trout fishing in the world, there’s very little else (aside from penguin watching and sheep herding) to attract visitors to windswept southern Argentina. The British planted brown trout in the rivers during the early 1900s, and with no dams or intrusions, the fish instinctively ran to the Atlantic Ocean each year and grew to monstrous proportions. Each season, anglers head to these rivers to fight the strong winds and hopefully catch their largest brown trout on a fly.  Unfortunately for frugal anglers, most of the Rio Grande–the most famous of the region’s rivers–flows through private land, so the only way to get on the water is to book a spot at one of the several lodges and estancias along the river. Some charge as much as US$1,000 per day for lodging, meals, and guided fishing, although there are a few less-expensive alternatives.

The New Quarry
At the opposite end of the country—along Argentina’s borders with Uruguay, Brazil, Paraguay, and Bolivia—are the relatively new warmwater fisheries for dorado, pacu, and other species.  The Corrientes, Salta, Santa Fe, and Entre Rios provinces hold a handful of lodges and outfitting services for these new sought-after warmwater species. Most often compared to tarpon in the way they jump once they are hooked,  the golden dorado can reach upwards of 60 pounds in some tailwaters, and can top to 30 pounds in free-flowing river or marsh systems. The rivers that feed the marshlands, Esteros del Ibera and Esteros de Santa Lucia, have established lodges, while other northern jungles and mountainous rivers also hold good numbers of dorado and pacu, but are home to less established lodges, due to lack of infrastructure and their remote locations. 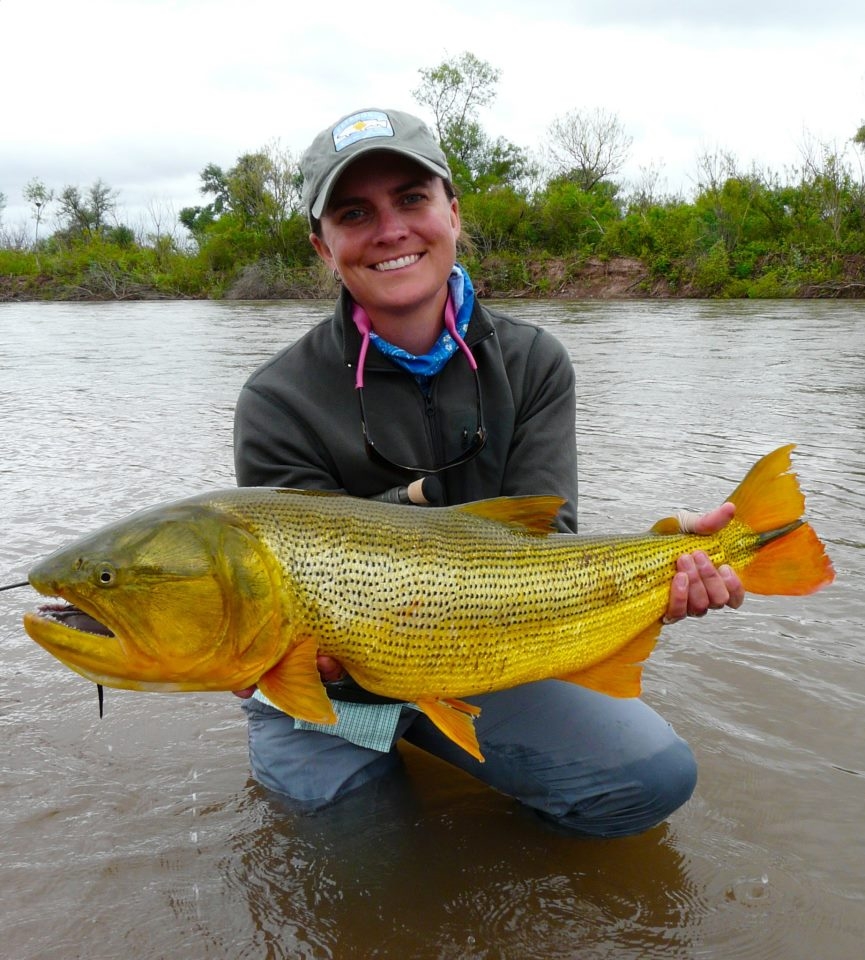 The Country
On a trip to Argentina, there’s lots to get excited about, aside from the fishing. The country has everything an adventurous traveler wants: the cosmopolitan city of Buenos Aires, quaint small towns, deserts, glaciers, the pampa grasslands, mountains, jungles, and beaches.  The countryside itself is miraculous and varied, and there’s very little sprawl, as most of the land outside of the towns is wilderness or ranchland.  Half of the population of Argentina lives in the four largest cities, so there are many little “pueblos” and nothing between the Andes and the Atlantic.

And then there’s the food. Argentina is famous for its beef and wine, and that’s no coincidence. The local diet could best be described as “all meat, all the time,” but you can also count on an assortment of organic or locally sourced vegetables and fruits, as well.  Most meats are cooked on a special grill called a parilla over coals at low heat.  The process of this barbeque is called an asado, and I’ve enjoyed beef and lamb cooked this way several times. Expect to have a variety of empanadas as accompaniments to any asado or as appetizers before dinner.

I am always surprised by how easy it is to get around and by how conveniently located the towns are in relation to the rivers. Everywhere I go, the people are friendly and helpful. The rural people are exceptionally welcoming. Though very few speak English,  they are very accustomed to dealing with travelers. The expense of getting there aside, there really is nothing about Argentina that should deter any American who wants to experience this gorgeous part of the world. 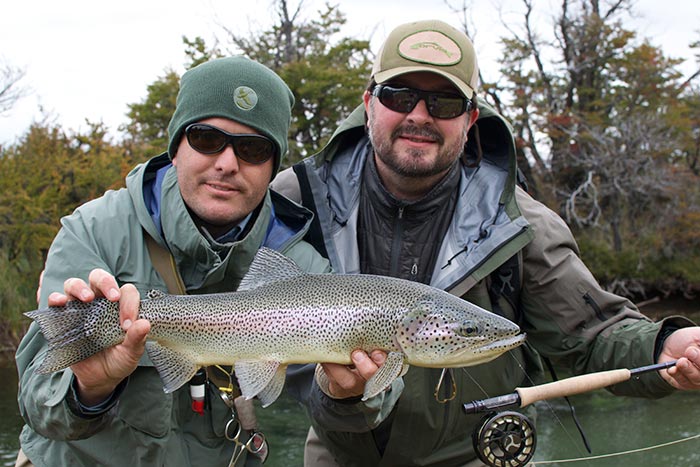 Jeremy Kehrein is Sporting Travel Program Manager for Orvis Adventures. He has guided and lived in Argentina and Montana. If you have questions about travel and fishing in Argentina, contact Jeremy at 800-547-4322 (Mon-Fri, 9am – 5pm (ET)) or orvistravel@orvis.com.

From the dorado along the northern border to sea-run browns in Tierra del Fuego, Argentina has lots to offer.
Map via wikipedia commons

2 thoughts on “Pro Tips: An Angler’s Guide to Argentina”