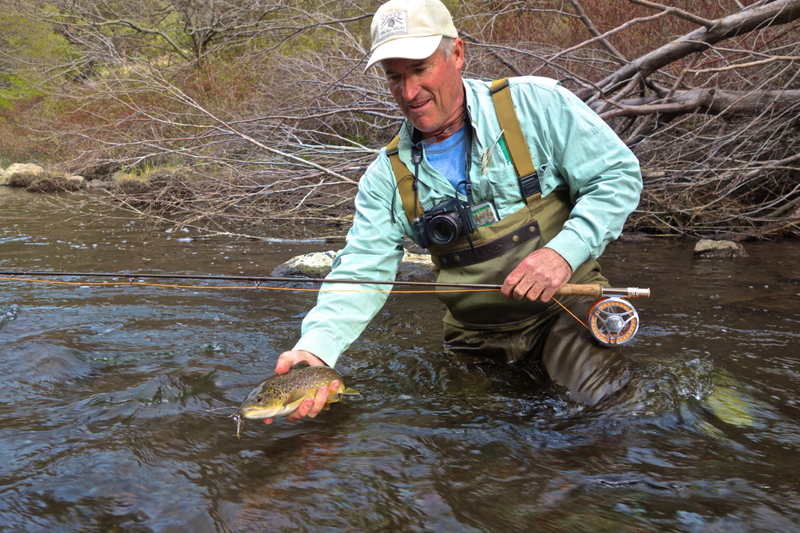 [Editor’s Note: Paul Moinester has embarked on a six-month, 20,000-mile adventure to exploring the upstream battle to protect wild fish and their habitat. (Check out his introductory post here.) He will be posting dispatches on the Fly Fishing blog throughout his journey. And, as someone who has fished with Brian O’Keefe, I can corroborate everything Paul writes here.]

No matter how hard I try to contain my excitement, I inevitably spend the days leading up to any fishing trip daydreaming about everything unfolding perfectly. Thoughts of vicious takes, line zipping off my reel, lots of gripping, and even more grinning swirl through my head and consume my brain. In the weeks leading up to my six-month upstream journey, this problem was exponentially worse.

The easiest way to dampen these sweet dreams is to hear the words “You couldn’t have come here at a worse time,” “you should have been here a few weeks ago,” or “the fish just aren’t here now.” These words have characterized my trip thus far, try as I might to develop an itinerary that enables me to catch fish and sleep outside without freezing. I knew going into my trip that my timing was less than ideal, but this was my six-month window, and I had to do my best with what I had. Perhaps I was a bit too optimistic or naive, but I never imagined I would get skunked as often as I have. 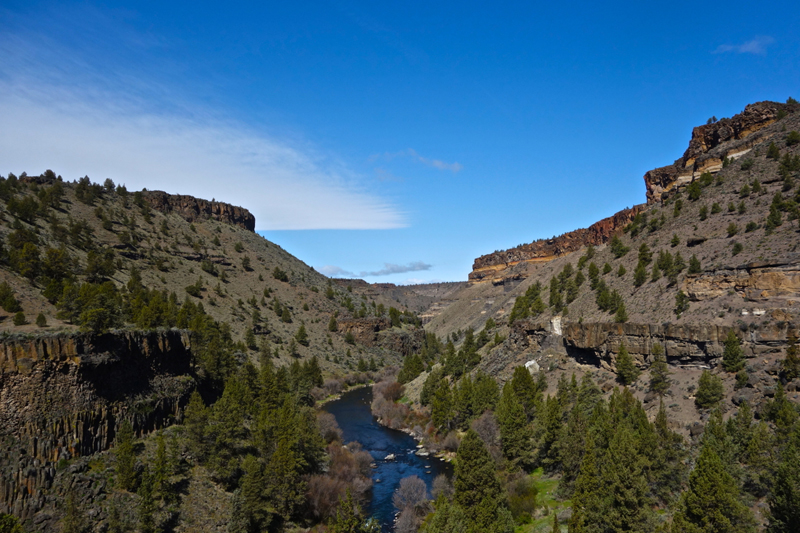 A beautiful stretch of the Middle Deschutes seems to hold endless possibilities.
Photo by Paul Moinester

The toughest stretch of fishing I’ve had so far were the ten days I spent drifting beads and swinging flies for steelhead on the Oregon Coast and in the Portland area. The fish of a thousand casts proved to be much more elusive than advertised. During those ten days, I spotted three fish and hooked zero. On the bright side, I got a lot of casting practice in with my new Helios Spey rod! So in need of a pick me up, I decided to spend a few days chasing trout. And through a touch of serendipity my luck with timing changed: not with my fishing, but with an individual.

Hoping that a bounty of trout would eliminate the foul hangover of unfulfilled steelhead dreams, I headed to Bend for a few days of fishing the famed Deschutes. On my way out to Bend, I received a call from Brian O’Keefe, a founder of Catch Magazine and one of the most notable fly-fishing photographers in the world. I connected with Brian through Bryan Huskey, the brains and camera behind Doc of the Drakes and my future host in Boise. O’Keefe, who is almost always on the road photographing for Catch Magazine, just so happened to be in his hometown of Bend and more importantly had a few days with nothing on his schedule. My luck was changing. 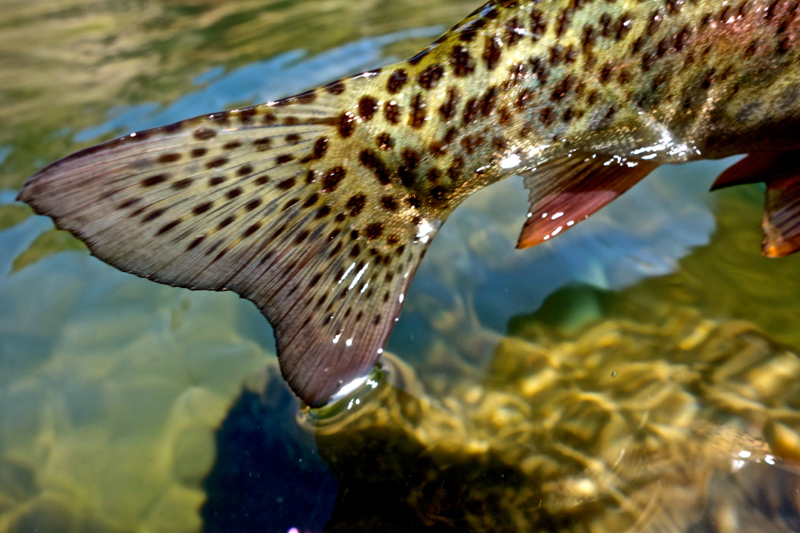 The tail of a Deschutes redside rainbow trout caught by the author.
Photo by Paul Moinester

I had hoped that Brian might have time to grab a beer, so I could pick his brain and hear some stories about his conservation work and travels, but he had much more in mind.  Not only did he offer to let me stay with him, but he blocked off two days for us to fish together and connected me with a bunch of his fishing buddies from the Bend Casting Club. This wasn’t ideal timing to fish in Bend but with a host and guide like Brian, things were looking up.

During the first two months of my journey, I’ve had the opportunity to fish with some world-class fly fisherman, but O’Keefe might just be the best. He possesses a casting stroke that has won him countless competitions and is so adept at catching fish it appears effortless. 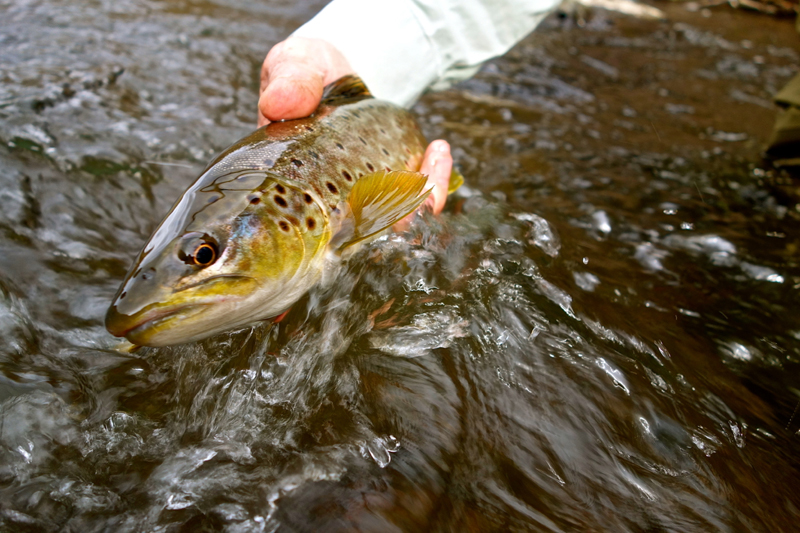 Another beautiful brown from the Deschutes, one of many such gems.
Photo by Paul Moinester

Over the course of my two days fishing with Brian, I saw some remarkable stuff. He made seemingly impossible casts, caught fish in spots that looked barren and fruitless, and had more command of his fly than anybody I’ve ever seen. But what impressed me the most about Brian is his unparalleled admiration for the beauty of fish, their environs, and the sport of fly fishing.

Brian has traveled to pretty much every fishing destination you can imagine. He has caught 200-pound tarpon, bullet-fast tuna, and jaw-dropping dorado. And the list goes on and on and on. But as much as he loves these exotic species and locales, his profound appreciation for fish is apparent when you see the excited look on his face landing a beautiful ten-inch redside trout—a local rainbow variety—ten miles from his house. 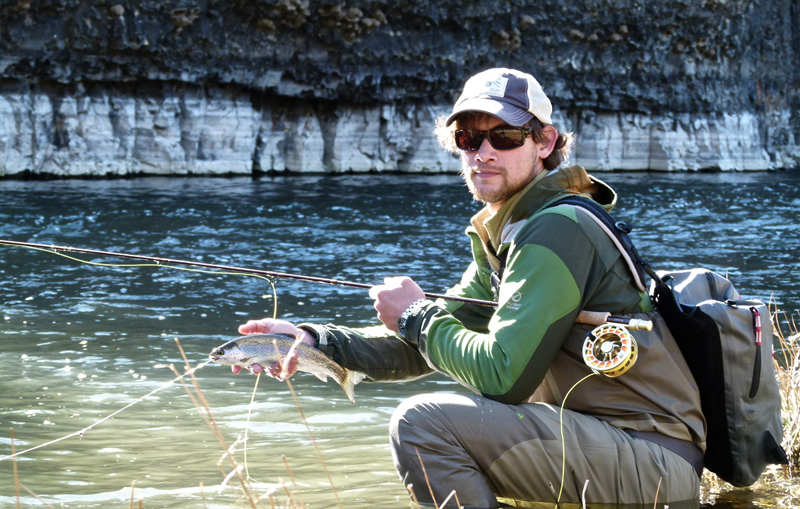 The author poses with a redside from the Crooked River.
Photo by Brian O’Keefe

Despite all of the notches on his fishing belt, Brian actually doesn’t aspire to catch the biggest fish or the most—he wants to watch you do it. And he wants to watch through the lens of his camera. Capturing the magnificence of these moments, as well using textbook technique and a pinpoint accurate cast to catch any fish (no matter how big or small, exotic or ordinary) are what bring him the most gratification.

This deep regard for nature’s majesty and fly fishing epitomizes Brian’s photography and is the ethos of Catch Magazine. His work captures the beauty of wild fish, their habitat, and the sport of fly fishing, not the heroics of the individual grinning valiantly at the camera. He bemoans the elements of conquest that have emerged in the fly fishing world and is quick to point out that Facebook is responsible for the death of thousands of fish a year due to people mishandling fish as they pose for victory shots. After weeks of tough fishing, the author found joy by nymphing for redsides on the Crooked.
Photo by Brian O’Keefe

During our time on the water, I had the opportunity to observe the master at work as he wielded both his camera and his fly rod. As a devoted conservationist and amateur photographer, it was amazing to see how Brian’s keen eye captured the essence and beauty of the raw landscape, the rough river, and its inhabitants. Plus it’s a pretty awesome feeling to hook into a fish and remember that you have a world-class fly fishing photographer standing behind you with his camera pointed in your direction.

And hook into some fish we did. Our days on the river were far from epic for these trout-filled waters, but I still managed to catch more fish in two days in Bend than I had in the previous two months. And while the fishing may not have been the stuff of legends, spending two days standing in a frigid river, shrouded by the shadows of towering canyons with a fly rod in hand and Brian O’Keefe by my side are two days I won’t forget. 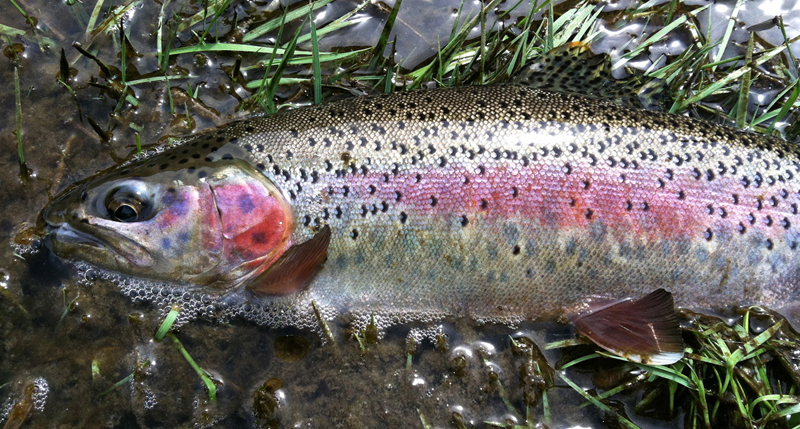 Redside trout are native to the region and feature stunning colors.
Photo by Brian O’Keefe

Introducing “An Upstream Journey”
Dispatch #1, from the Florida Keys
Dispatch #2, from the Louisiana Marsh
Dispatch #3, the Salmon of the Columbia River
Dispatch #4: Steelhead and Pacific Forage Fish

5 thoughts on “An Upstream Journey, Dispatch #5: Taking a Break in Bend”