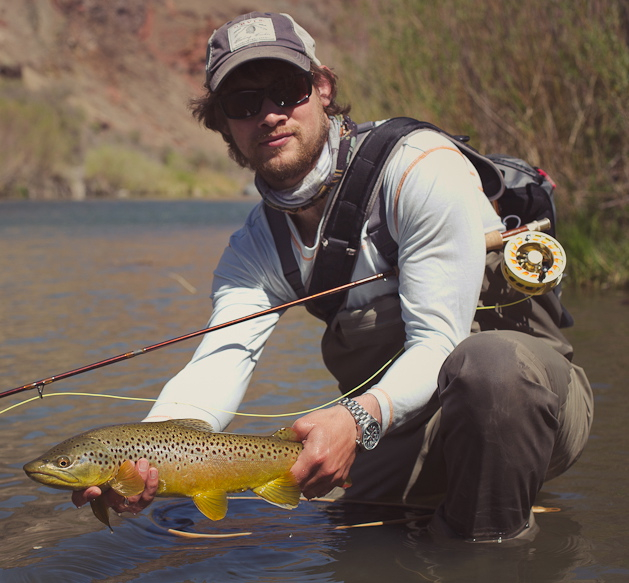 [Editor’s Note: Paul Moinester has embarked on a six-month, 20,000-mile adventure to exploring the upstream battle to protect wild fish and their habitat. (Check out his introductory post here.) He will be posting dispatches on the Fly Fishing blog throughout his journey.]

Standing on the bank, my eyes affixed to the river, I scoured the water looking for the subtle interruption of a nose piercing the otherwise glassy surface. It only took a minute to spot a snout emerge from the water. But this fish was not peacefully rising and kissing the sky. It was in full attack mode, violently breaking the surface and aggressively sucking down juicy caddisflies that the river was delivering in conveyor-belt fashion. 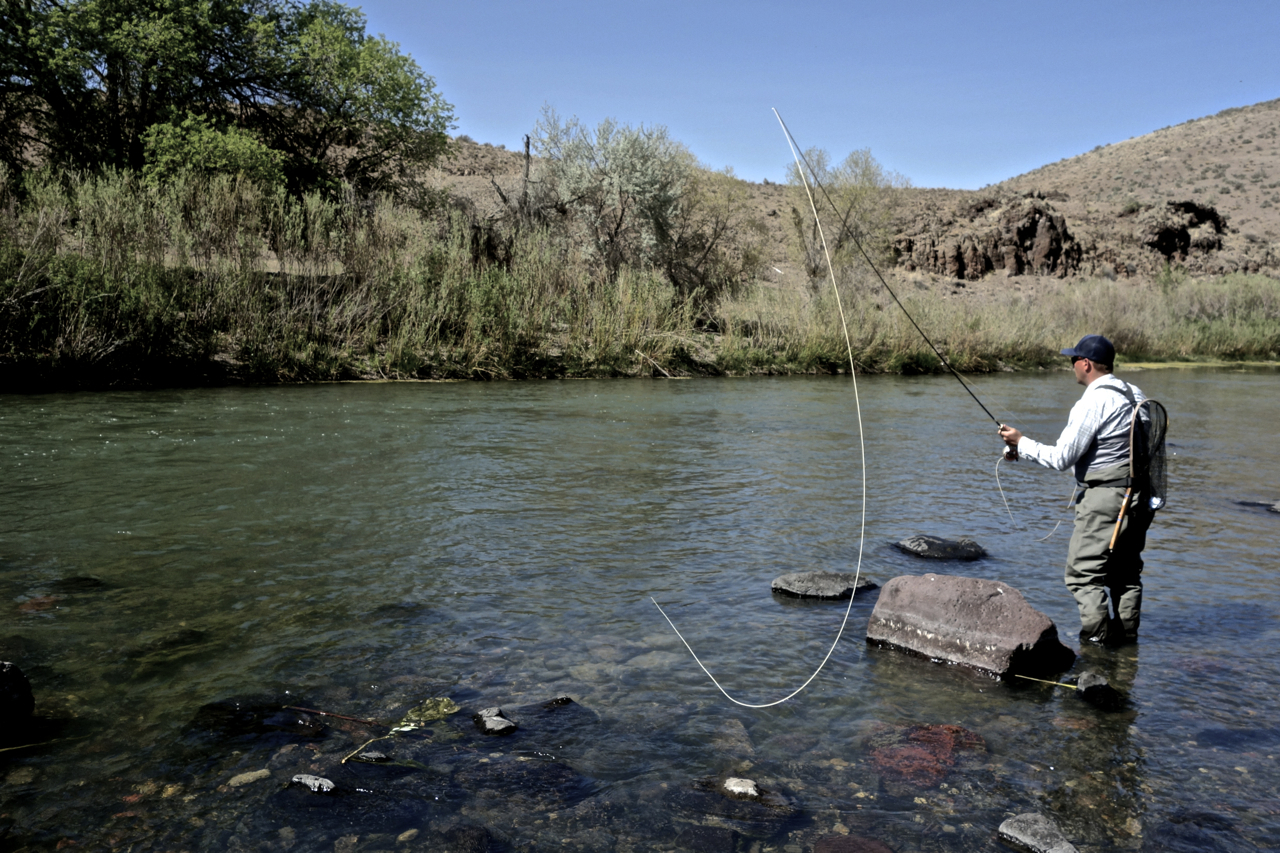 I quietly stepped out from my brushy cover and descended into the river. Intent on not spooking this perfect target, I calmly and methodically moved to a prime casting position. I applied a fresh touch of floatant to my size 14 caddis imitation and stripped out about 50 feet of line. Seconds later, my fly was drifting listlessly right along the seam and then it was gone. It had momentarily vanished from my sight, but I knew exactly where it was—firmly affixed to the lip of a none-too-pleased brown.

Over the course of my journey, I have experienced the great generosity and hospitality of the fly fishing community. In the weeks leading up to my departure, I readied myself mentally and physically for months of isolation and camping in harsh weather. But my camping gear has sat largely unused in my trunk since nearly everywhere I go, I meet someone who offers me a comfortable bed and warm shower. 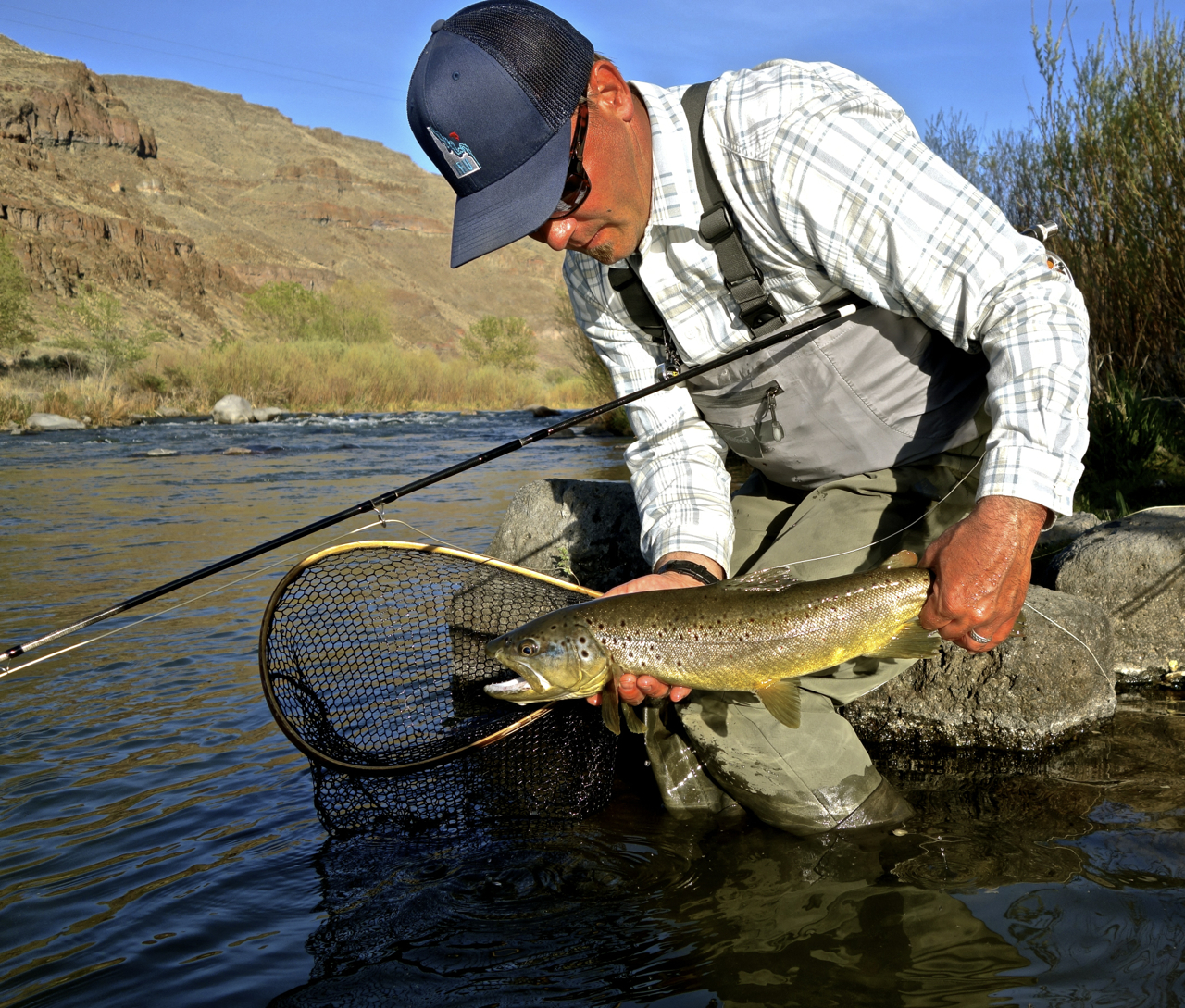 Bryan landed this bank-feeding brown on the Drunk Fork.
Photo by Paul Moinester

As much as I appreciate these creature comforts, the element of hospitality I appreciate the most is people taking me to their favorite fishing grounds or better yet, their secret spot. This generosity is generally accompanied by one string attached: an oath of secrecy. Fishermen are notorious for going to incredible lengths to protect the identity of their sacred waters. Like any entry-level gangster, I have been schooled not to name names.

So there I was connected with a pissed off brown somewhere in ION (Idaho, Oregon, Nevada) in the middle of West America on a river dubbed “The Drunk Fork of the Anheuser” by Bryan Huskey, the producer of “Doc of the Drakes” and my host in Boise who introduced me to his prized stretch of water. After a few minutes of short runs, bulldogging, and thrashing, I netted the hefty fish. He measured out at 20 inches long and had broad shoulders and a big gut. Back in my home waters of the Mid-Atlantic, this fish would have been regarded as a rare slab, photos of which would have tortured all of my fishing buddies. But out here on the Drunk Fork, he was cookie-cutter. 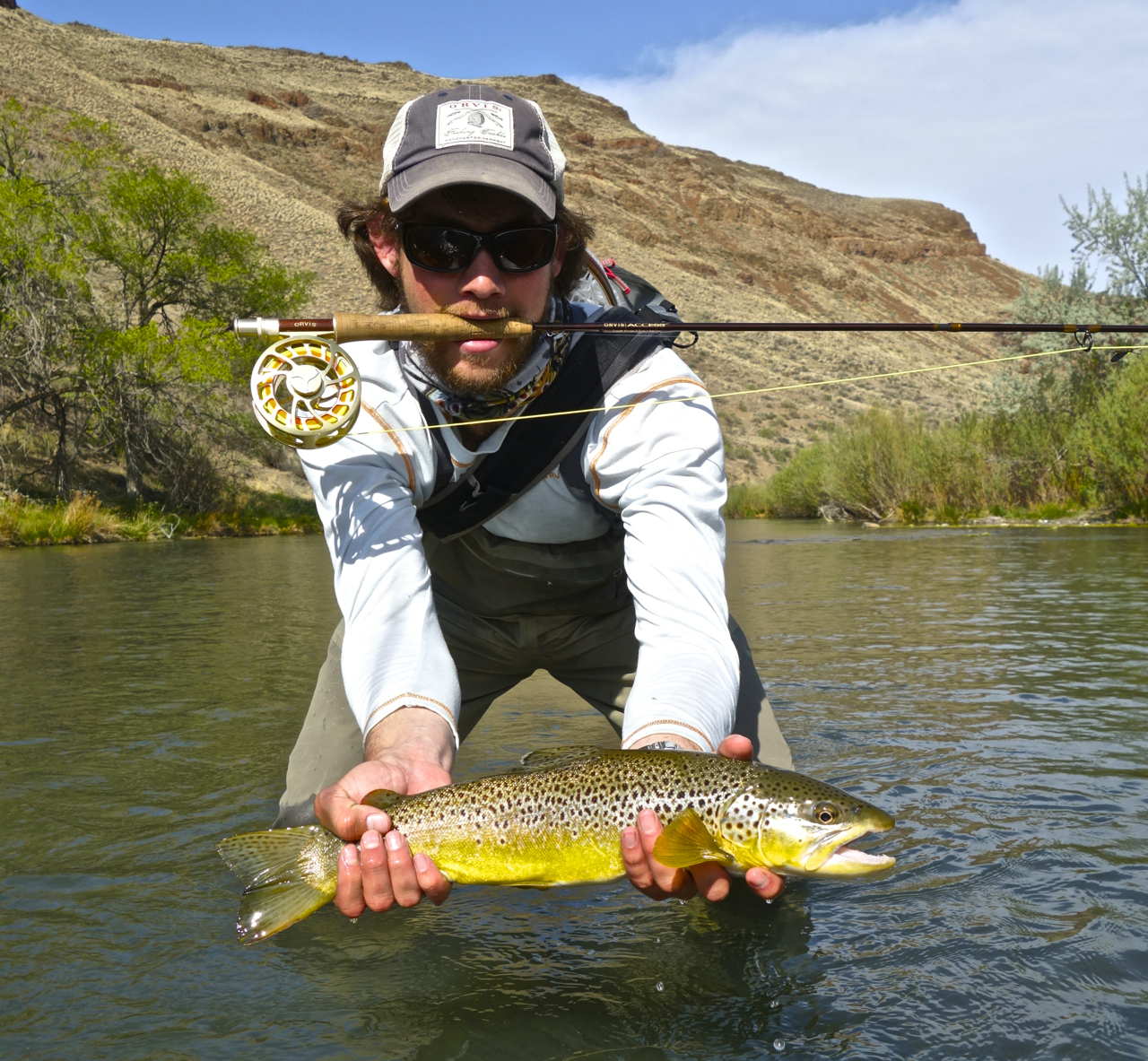 This was one of the author’s better fish.
Photo by Chris Genero

In three days of fishing the Drunk Fork, I caught about 20 of these browns and hooked around 10 more, all on dry flies and emergers. Every fish taped out between 18 and 23 inches, and every fish ranged from husky to football-shaped. But most importantly, all of the browns were quickly released back into the water unharmed.

During my travels, I have encountered individuals who look at me quizzically when they see me release a fish. The befuddled look on their face suggests the question, “You’re not going to eat that?” The same confused expression also adorns the faces of some of my non-fishing friends who see my pictures and can’t wrap their heads around why I don’t eat the fish I catch. 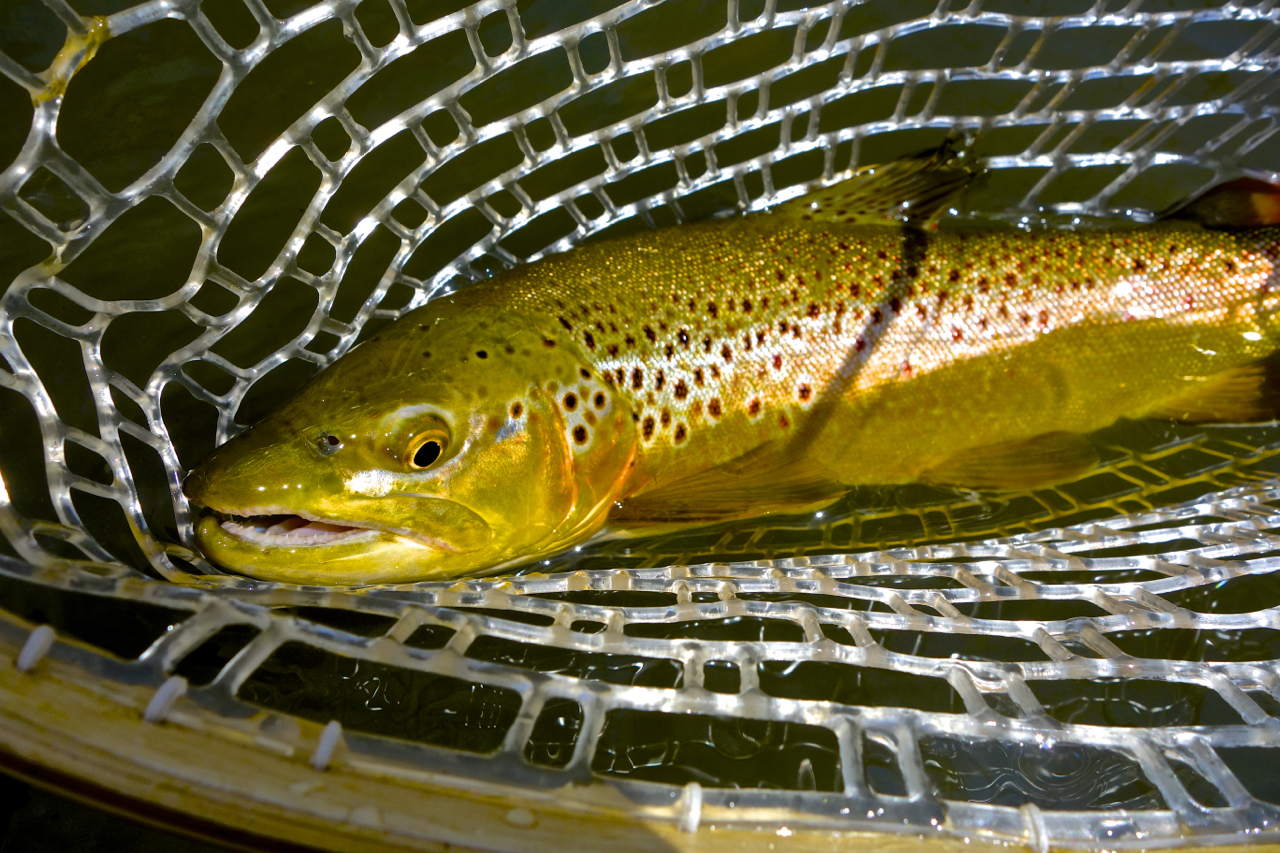 I’m not opposed to eating fish. And I’m not one to judge people for eating fish they catch as long as they obey the regulations and are not wasteful. But I’m a fervent believer in Lee Wulff’s statement that “Game fish are too valuable to only be caught once.” So rather than bonking a fish and taking it home for dinner, I release it knowing that “The finest gift you can give to any fisherman is to put a fish back” (also Lee Wulff).

My success on the Drunk Fork is directly attributable to a history of strict adherence to catch-and-release and sound regulations from the state wildlife agency for this fishery. In this small, heavily fished water, it’s likely that every trout I landed had been caught before—fish I wouldn’t have hooked had someone once decided to serve them for dinner. 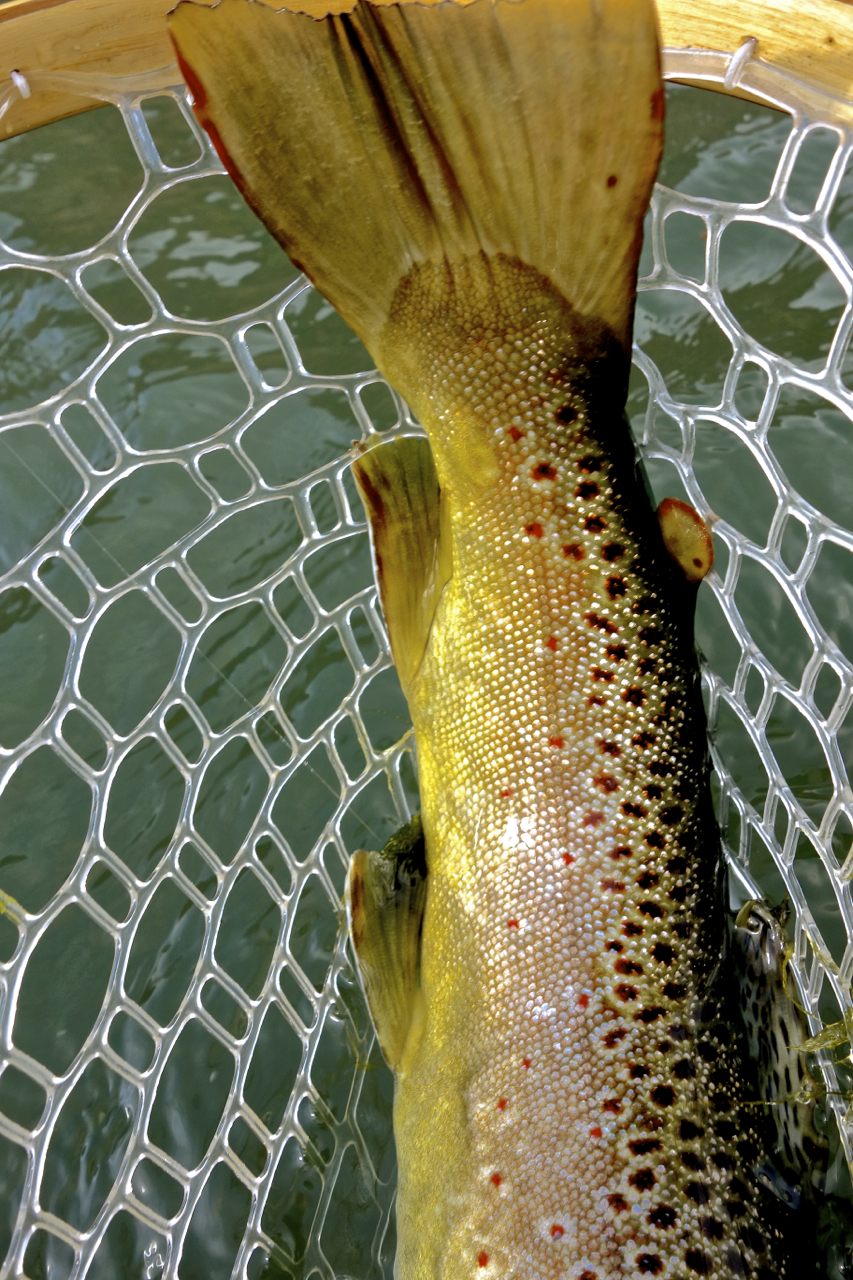 Frequenters of the Drunk Fork, such as Huskey even know individual fish on the river. Huskey has literally named fish, caught them repeatedly, and proudly displays on his fridge a series of photos depicting friends with the same monster trout. As he told me, “If that’s not a testament to the value of catch-and-release, I don’t know what is.”

On my final day fishing the Drunk Fork, I managed to entice one last vicious take just as the sun set over the sheer canyon that surrounds the river. As I stood in the glowing orange light with the tail of a huge, wild trout hanging over the lip of my net, I was overcome with gratitude. Gratitude not just for my host and new friend Bryan, who had introduced me to this incredible body of water, but gratitude to the thousands of fishermen who stalk these waters every year and release their fish. Lee Wulff was right. They had given me the finest gift. 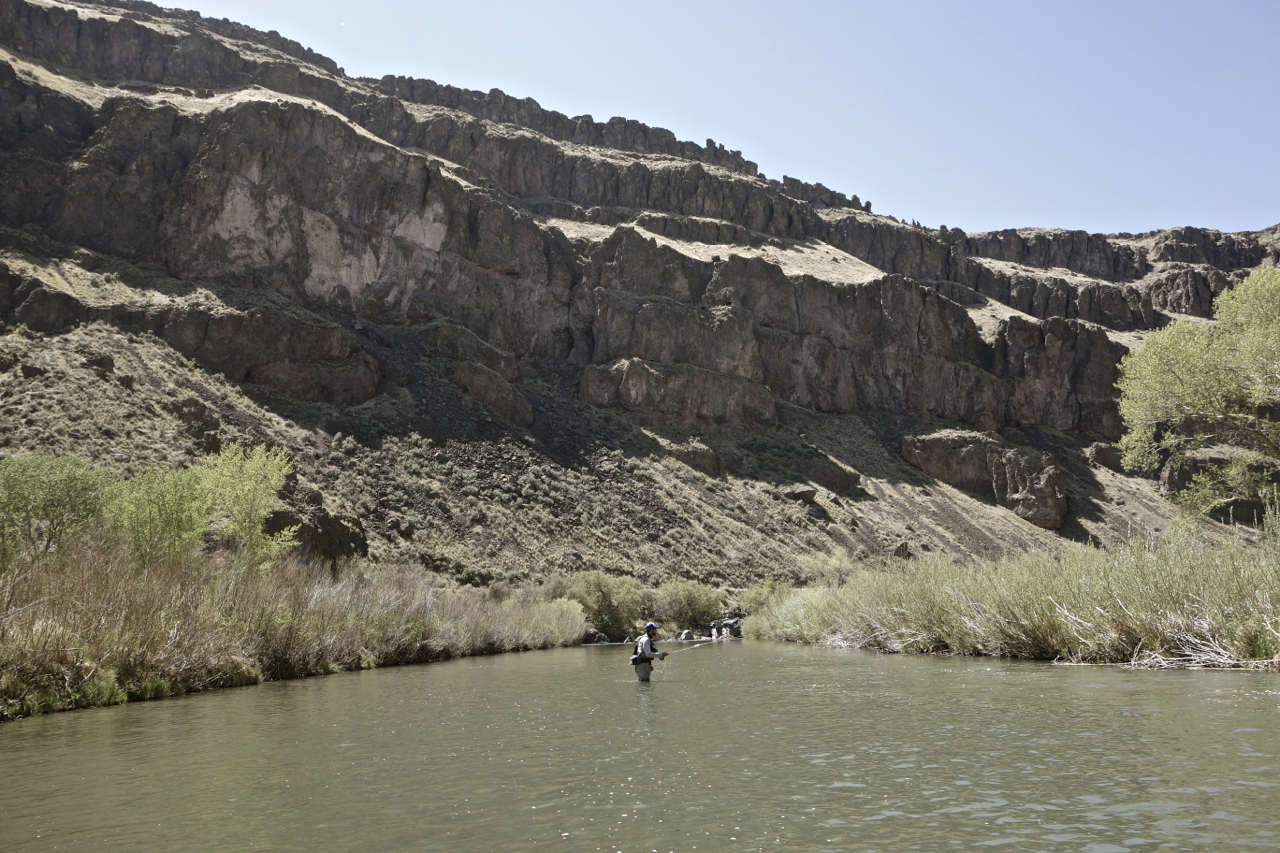 One thought on “An Upstream Journey, Dispatch #6: Catch-and-Release on the Drunk Fork”