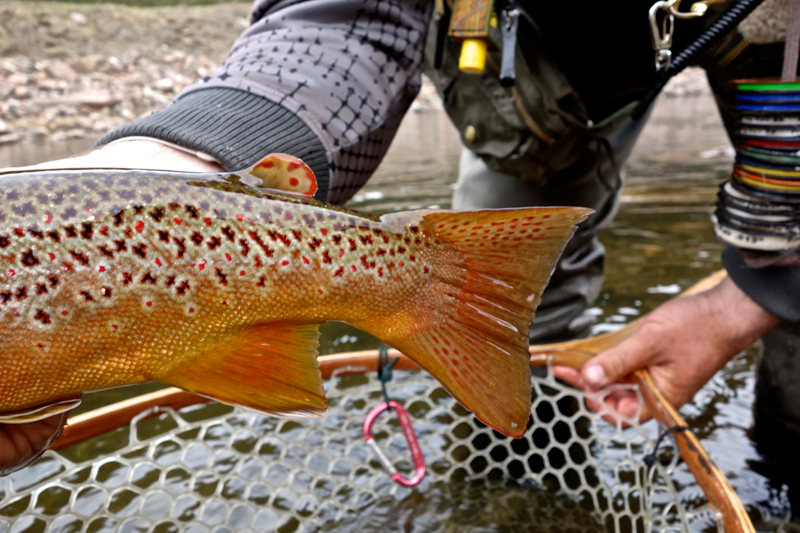 Moose shows off the gorgeous colors of a Colorado brown trout on the Taylor River.
Photo by Paul Moinester

[Editor’s Note: Paul Moinester has embarked on a six-month, 20,000-mile adventure to exploring the upstream battle to protect wild fish and their habitat. (Check out his introductory post here.) He will be posting dispatches on the Fly Fishing blog throughout his journey.]

Runoff was in full force in Colorado. Everything was running high, fast, dirty, or just totally blown out. I was in Grand Lake visiting my buddy C, a former colleague from my DC days, and exploring the headwaters of the Colorado, which American Rivers had just given the ignominious honor of being named America’s most endangered river.

Earlier in the week, I had fished the Taylor River near Gunnison with Moose, the fishing manager at Eleven Experience. We fished right below the Taylor Dam and had some luck with several big, educated browns. But we struck gold above the dam at the mouth of the Taylor as it flowed into the reservoir. Despite the turbid, chocolate-brown water, we managed to land more than 20 fish in an hour. 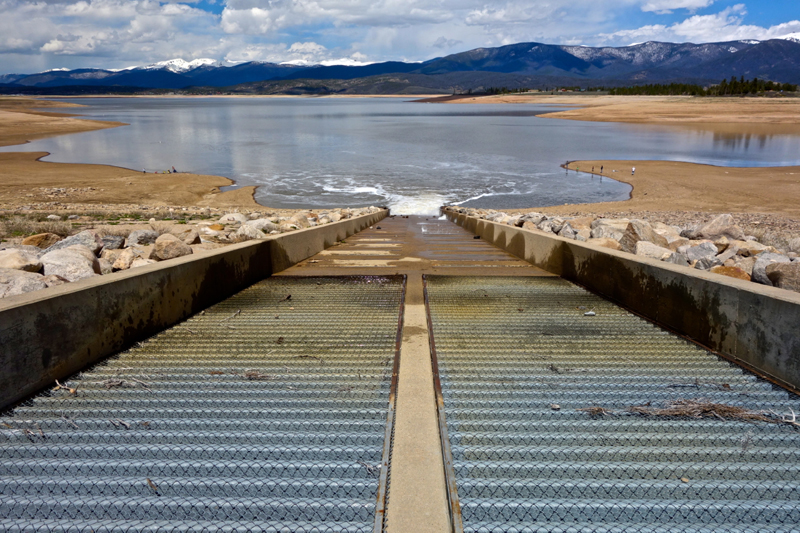 Water getting pumped from the Colorado into a nearby reservoir on its long journey to the Front Range.
Photo by Paul Moinester

The day after arriving in Grand Lake, C and I went to explore our fishing options. On my way into town, I had driven past two big reservoirs, and with my recent success on the Taylor, we went in search of the rivers that form these massive reservoirs. The only problem was that we couldn’t find them: not the rivers flowing into or out of them.

We drove down the mountain to the Colorado and tried to follow its path upstream, but we couldn’t trace it back up to either reservoir. Then we drove around the reservoirs looking for their source and couldn’t find one river. The only thing we found resembling a river was a long concrete slab with grates and water gushing out of it. Things weren’t adding up.

It wasn’t until the next day when I met up with Rob Firth, Trout Unlimited’s Upper Colorado River Coordinator, that I was able to piece it all together. As we stood on the banks of the Windy Gap Reservoir, another nearby reservoir, in the midst of a blue-winged olive hatch, Rob filled me in on the history of this watershed and its complicated dynamics. 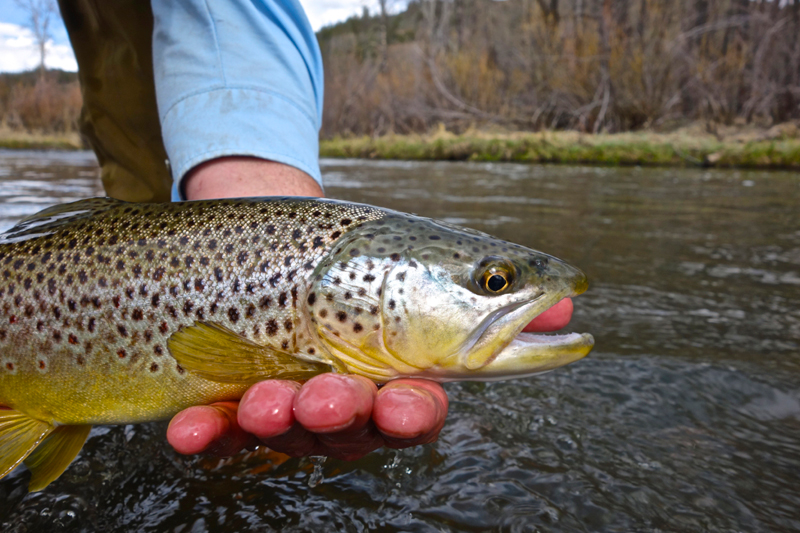 Rob Firth holds a beautiful brown he caught on the Colorado River.
Photo by Paul Moinester

It turns out that these reservoirs don’t have a direct river source. Rather, these huge bodies of water are connected and filled by large pipes that pump water from the Colorado River up the mountain and into the reservoirs. From there, the water gets transported into Grand Lake and is then pumped through the Adams Tunnel and under the Continental Divide into an elaborate framework of reservoirs, tunnels, and pipes that was constructed to meet the municipal water needs of Colorado’s Front Range – the state’s major population center east of the Continental Divide, which bisects Colorado.

And the Front Range is sucking the West dry. Currently, 60% of the Colorado River headwaters gets sucked out and pumped to Fort Collins and other Front Range towns.

Likewise, about 60% of the Fraser River, a major tributary of the Colorado, gets shipped over the mountains to Denver through Denver Water’s Moffat Tunnel pipeline, the other large diversion in the Upper Colorado headwaters.

To make matters worse, years of reduced snowpack, likely due to climate change, have meant these rivers are running lower than normal. Couple these diminished water levels with Denver Water’s plans to expand the Moffat pipeline project and increase Fraser water drainage to 80%, and you have a once mighty river that might be reduced to a mere trickle unless something is done to stop it. 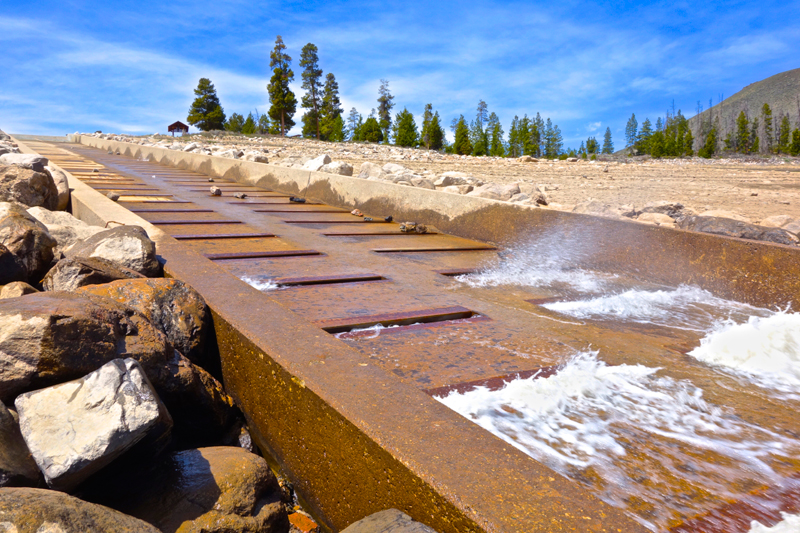 Water on its subterranean path to the Front Range.
Photo by Paul Moinester

The Front Range’s growing thirst for West Slope water is protected under Colorado’s antiquated water laws that were established nearly 150 years ago. These laws created a policy Rob calls “first in time, first in right” that still governs Colorado’s water decisions today. What that means is that because cities in the Front Range such as Denver and Fort Collins were among the first to establish water claims in the Grand County headwaters, they have senior water rights and priority access to the Upper Colorado’s water.

These senior water rights make it difficult for organizations like TU or concerned citizens to block expansion projects. The only real tool available is to work through the U.S. Army Corps of Engineers or the Environmental Protection Agency, which exercises permitting oversight for pipeline expansion projects. However, these agencies can only mitigate the environmental impact of expanded drainage. They can’t outright stop it.

After a thorough rundown of the Colorado’s plight, Rob took me to a beautiful stretch of the river for a few hours of fishing to demonstrate the value of this resource. We were joined by Randy Scholfield, TU’s Director of Communications for the Western Water Project. Over the next few hours, we continued our conversation as we landed feisty brown after brown. 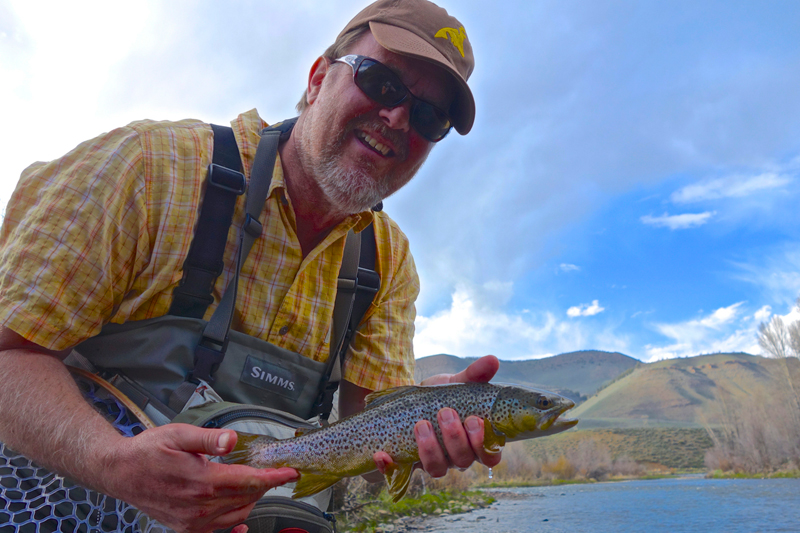 Randy poses with a brown on the Colorado.
Photo by Paul Moinester

In the rare moments when the bite slowed down, our focus shifted back to discussing the important work TU is doing to save the Colorado. Recognizing the inherent challenges, TU has launched a targeted and strategic campaign to encourage Denver Water to agree to minimal protections for the Colorado, including: regular flushing flows to keep sediment and silt from building up in the river, temperature standards to maintain minimal flows, and habitat restoration projects to keep the river healthy in its diminished state.

Implementing these simple, pragmatic steps would go a long way toward ensuring the health and vibrancy of this great fishery. So far, TU’s approach has worked well with Northern Water, which has adopted several practices that should help preserve the Upper Colorado below Windy Gap Reservoir. And while they know it will be an uphill battle, Randy and Rob are hopeful that Denver Water will follow Northern Water’s lead and agree to the basic protection that TU believes this river needs.

Standing waist deep in this beautiful setting connected to bulldogging browns, it was easy to see why Rob and Randy have dedicated their lives to protecting these pristine waters. These waters are ingrained in the history and identity of their state. They are the backbone of the West Slope’s economy and the lifeblood of the West. And sadly, they are disappearing – getting sucked out and piped miles away.

If you are interested in helping Rob and Randy’s work to preserve the headwaters of the Colorado, please go to www.defendthecolorado.org and sign a petition asking Denver Water to protect this invaluable resource. It’s up to us anglers to lead the fight to protect the waters we love and cherish.

One thought on “An Upstream Journey, Dispatch #7: Defending the Colorado River”