[Editor’s note: Wildife artist Andrew Thompson believes that painting at its very best can express the very essence of the wilderness and provide a unique insight into the character and personality of the animals. Most significantly, it is an opportunity to experience the fish or animal in a way that can be shared by both the artist and the viewer. Thompson received a BA in Studio Art from Kenyon College in Gambier, Ohio and spent over a decade in the art world as a scholar and dealer specializing in late 19th and early 20th century American paintings. His has been exhibited in extensively in New York and the Adirondacks and are included in private collections throughout the country. He lives and work in Brooklyn and Hague, New York, a small town on Lake George in the Adirondacks, and he travels to the Wasatch Mountains and Tetons as much as possible.]

I grew up in Brooklyn,* and while I spent summers on Lake George, I didn’t really start fishing until after college. I started fishing very seriously with a friend and coworker on Lake George and throughout the Adirondacks, but we weren’t fly-fishing. After Hurricane Floyd rocked the area of northern Lake George where I had been living and working, I returned to Brooklyn. It was there that I got into a conversation with the bartender at my neighborhood watering hole about fly fishing.

So began my life as a fly fisherman: The bartender worked the Saturday night shift, and I would pick him up as the bar closed at 4:00 AM. We’d drive out of the city and be on the Beaverkill, Neversink, or one of the branches of the Delaware a couple hours later.

I soon started to fly fish in the Adirondacks, and I still spend most of my time on still water– chasing brookies, lakers, and landlocked salmon in wilderness ponds and lakes. I love paddling a pack boat or canoe and casting big streamers. (Not to mention the Adirondack technique of *cough* trolling a wobbler with a trailing fly *cough*.) In the spring and fall, Lake George can produce nice lake trout and salmon on the fly.

I go to Martha’s Vineyard every year and spend a few nights casting for stripers and mornings trying to hook up with a bonito or albies. I still remember my first albie. . . . I had no striping basket and my stripped-in line was in a floating tangle in front of me. The fish busted a foot in front of me, and before I even had a chance to gasp, the line was gone and I was deep into my backing. For sheer exhilaration, I can’t think of a more exciting fish to catch on the fly! 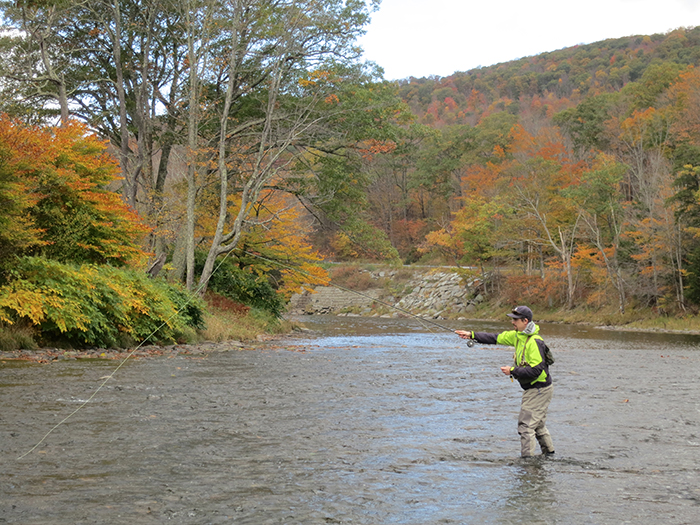 I have three-year-old and five-month-old sons, so the last few years have featured far less fishing than I care to admit, but I still get to the Catskills, Martha’s Vineyard and fish near my house on Lake George. I like to cast for brookies in the brook that runs through my town, using a 3-weight rod that a friend made.

The nice thing about painting fish is that I can live vicariously through other fishermen and their more grand adventures. On a personal level, it is also away for me to experience a fish that I probably will not have the opportunity to fish for, such as the 6-foot Bluefin tuna I painted recently.

To see more of Andrew Thompson’s work, visit his website .

*For fly-fishing and sporting art aficionados, I went to the same high school as Ogden Pleissner. Something about downtown Brooklyn makes people want to go out to fish and paint.