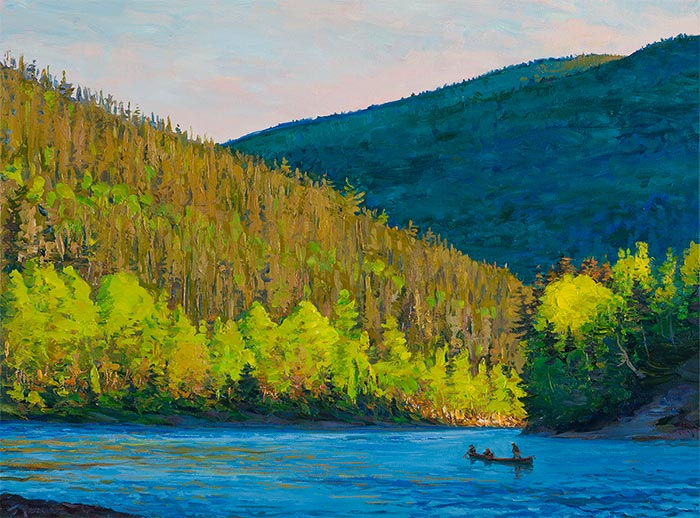 Artist Galen Mercer lives along the Battenkill in West Arlington, Vermont. Canadian by birth, he’s the grandson of two painters and the son of another, so it’s kind of in his blood. Here are five of his most recent works. He describes the project this way:

These works reflect several recent trips to Quebec’s Gaspé Peninsula, and range in subject from landscape sketches, rivers, and scenes that recount specific fishing moments. Generally, they are of moderate size, though I’ll be working up a large scale version of one of the fishing scenes later this fall.

Of the painting above, he says,

To paraphrase the famous Scottish novelist John Buchan, “fishing is…a perpetual series of occasions for hope.” Nowhere is this more the case than when making a new drop on a salmon river. Everything that’s preceded the moment is forgotten, as a fresh chance wipes the slate clean. At the very end of the day, a pull or two before the “last drop,” this marvelous state is especially acute. There is great theater in the mountainsides, the last light being caught by some and blocked by others, and while anxiety about your chances rises, opportunity increases by the moment. This painting is an initial study for a planned larger canvas. 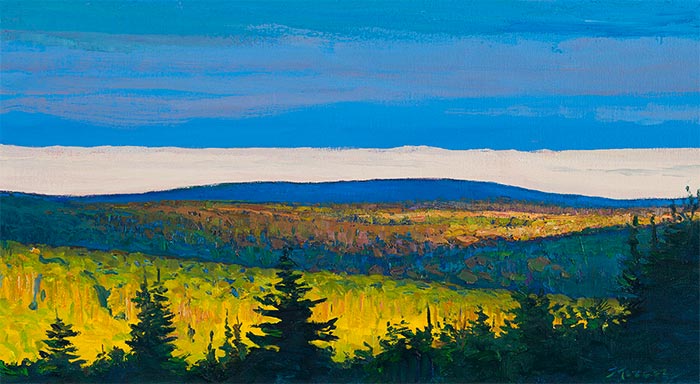 “First Light, Upsalquitch,” Oil on Canvas, 12″ X 22″, 2017
This painting depicts daybreak over the mountain ranges that define the beautiful Upsalquitch Valley. I left the river very early, in full dark, and was working my way back through various tortuous logging roads when I encountered this remarkable sight. The broad bands of recent night, gaining color by the second, were fascinating, as was the way first light caught and began to illuminate the ridges. 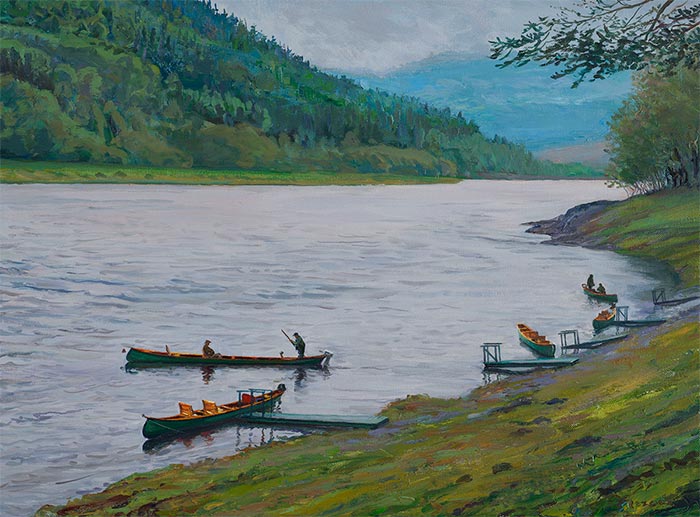 “Out on Soft Weather,” Oil on Canvas, 18″ X 24″, 2017
I have painted this canoe landing on the Restigouche before, but never in the silvery, atmospheric conditions that prevail during a fine misting rain. It’s a moment any salmon angler can relate to–heading out to fish on a windless, “soft” (as the Irish might say) morning that promises fine sport. What light there is tends to fall unpredictably, often in slender gaps miles away, changing mountain colors in surprising and lyrical ways. 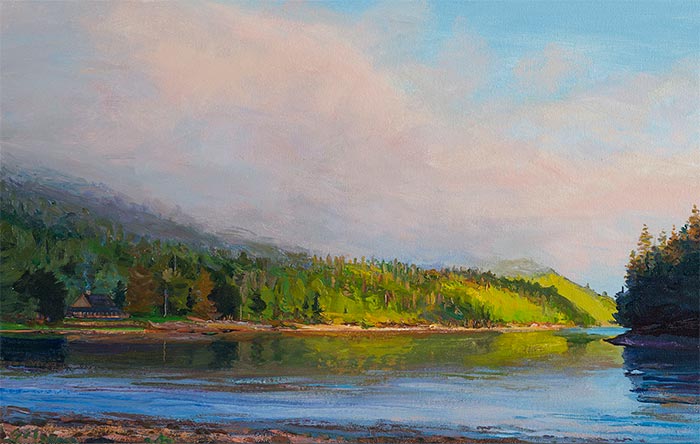 “Morning Fog, Pine Island,” Oil on Canvas, 14″ X 22″, 2017
One of the classic and most beautifully sited camps on the Restigouche River. As I was fishing downstream, mist blanketing the mountains suddenly began to light up as the sun crested. I asked our guide if he wouldn’t mind running us upriver so that I might view this expansive, beautiful pool with the fog burning off. It was well worth the short, chilly trip. 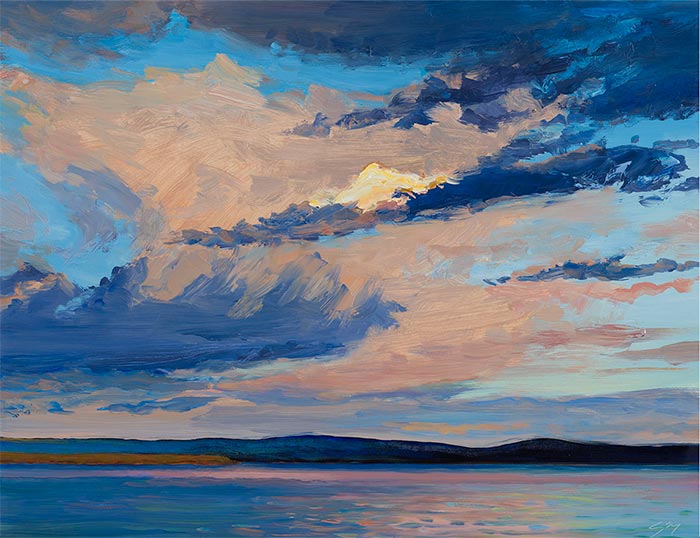 “Summer Dusk, Baie des Chaleurs,” Oil on Panel, 14″ X 18″, 2017
This is the second painting I’ve done of this compelling expanse. It is the body of water that defines the Gaspé and as such is subject to many moods. This storm broke some moments before I arrived at the Grand Cascapedia and was in the process of being whisked out by a strong wind. Its rain brought in many salmon.