Last month we announced our contest celebrating the women who live their lives and find their pause in the outdoor world.

Sharing awesome outdoor photography coupled with a prize package of great Trout Bum gear, an Orvis RECON, a Buff, and a Safe Passage Sling Pack really got people fired up. So did our Trout Bum video which provided some inspiration for the contest.

Simply put, the nearly 1,000 entries we received were excellent. However, as our intrepid judges culled and shared their pics, one image ultimately rose to the top.

So congratulations to Hanna Ryker or @hananahannah of Tacoma, WA for her winning image! 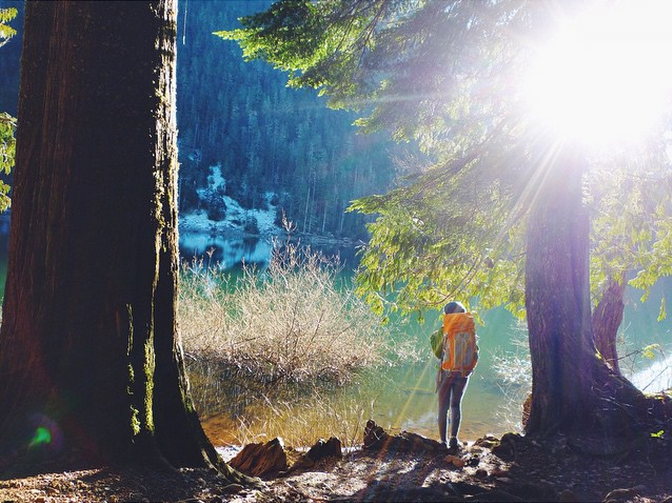 Hannah was kind enough to send along some backstory to her winning image which further solidified the vote. As our women’s product developer, Kate, said: “What a great story, and perfect example of finding your pause!”

This photo was taken last December at Lower Lena Lake in the Olympic National Forest – the trail continues on to the upper lake and enters the Olympic National Park. I had just spent the last three months finishing up my degree in teaching by completing my student teaching experience at a public high school – three months of wearing slacks and heels and blouses and feeling totally NOT myself. I was supposed to be entering the grind of “real life,” but my soul was kicking and screaming all the way.

When I received a new backpack as a Christmas gift, I knew it was just the excuse I needed to get outside. So I set out by myself on December 30th and made my way up the Olympic Peninsula. The sun may have been out, but it was not warm! The trees were all frosted and there was snow along the opposite shore of the lake.

Despite the cold, and the initial uncomfortable awkward feeling of being totally alone, I sat next to the lake and ate some snacks and made tea. As I watched the steam rise from the water in the silver lid of my thermos in the early morning sunlight, I felt something in myself rise too. In the crisp harsh cold of an alpine winter morning, the self at my center finally came back out to play.

This experience really illustrated the ‘find your pause’ moment for me because it took a moment of complete lonesomeness and a reconnection with the natural world for me to remember who I am at the core. Our world is so fast that it can be difficult to pause and simply remember.

Thanks, Hannah. And thanks to all who participated. Check out all the great #FindYourPause entries here.

2 thoughts on “Announcing the Winner of the Orvis #FindYourPause Contest”