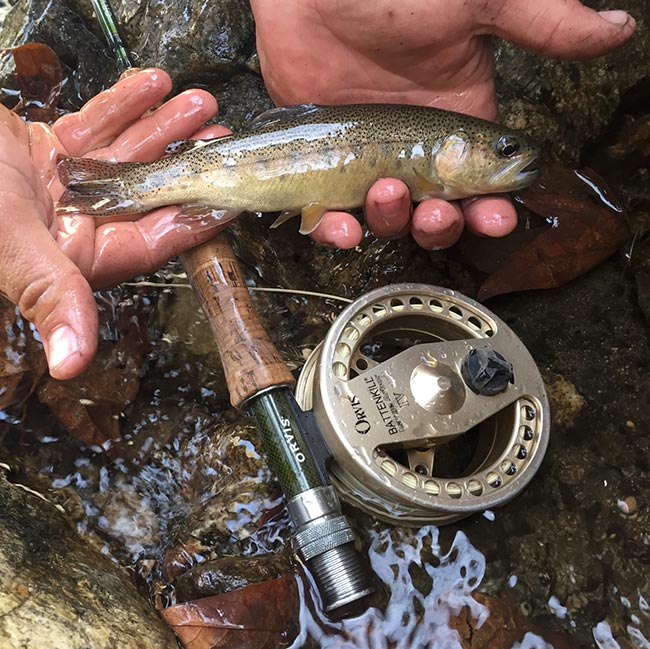 The bronze coloration of these beautiful rare native trout is something to behold.
Photo by Anastasia Coleman

I first heard of the Arizona Game and Fish Wild Trout Challenge while volunteering on a native-trout stocking expedition. We stocked a creek that had been destroyed by wild fires and had not been inhabited by fish for 15 years. The goal of AZGF is to introduce the native Gila trout to this creek until they get to a self-sustaining level, which would allow for a catch-and-release fishery. 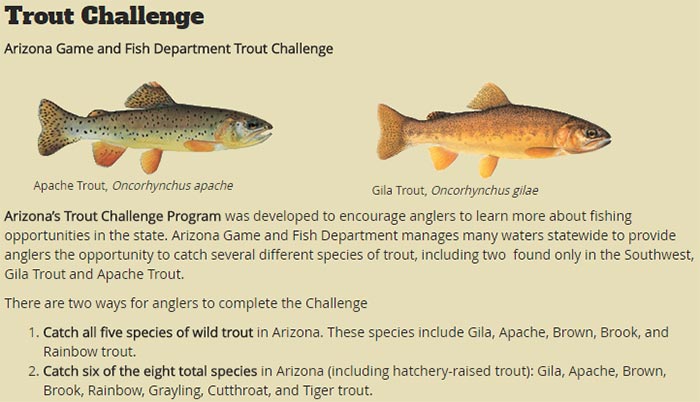 During the stocking trip, I had the opportunity to meet Mike Anderson, the Native Trout Coordinator for AZGF. Mike was wearing a Trout Challenge sweatshirt, which aroused some curiosity on my part, so naturally I started asking questions. The challenge sounded like fun and a great way to get into some creeks we have not yet explored. The only thing I thought would make the the challenge a little more interesting would be doing it in five days. That would mean we would have to fish a different stream each day in different locations through Arizona and catch at least one species of trout. My wife was immediately on board to do the challenge, so I started doing research on locations, time of year, and the species we needed to catch. 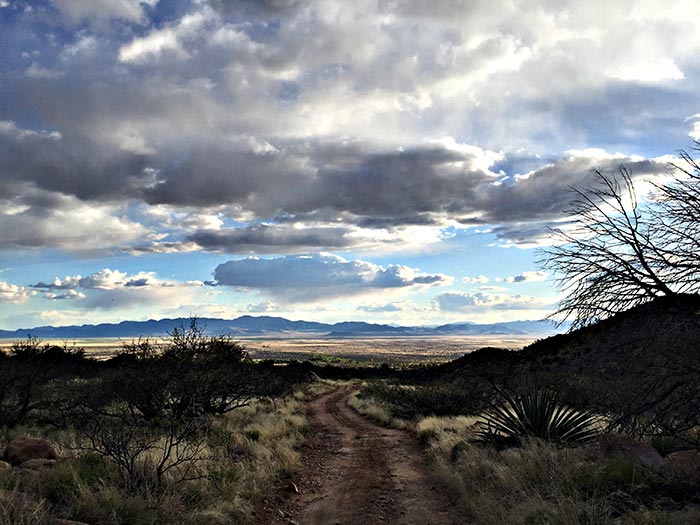 The road to the creek has some incredible scenery and a great view of the valley below.
Photo by Tyler Coleman

The first fish we were going to go after was the Gila trout. Our previous trip to fish for them (see “Into the Arizona Wilderness for Gila Trout“) had revealed that the creek closes from April first until October first, so our trip had to be moved up a few weeks or we would not be able to catch the species and complete the challenge. A friend gave me some info on the road to one of the creeks, and we decided to ride with another friend who had a more off-road-friendly vehicle for the first two stops. We packed up the SUV and headed on our way.

When we finally arrived at the trail head, it was apparent that we weren’t the only people who decided to fish the creek before the closed season. Fishing pressure in this small an area can make things pretty difficult in the amount of daylight we had left. Luckily the fish seemed hungry, and I managed to put my fly in front of a hungry fish in one of the first pools. 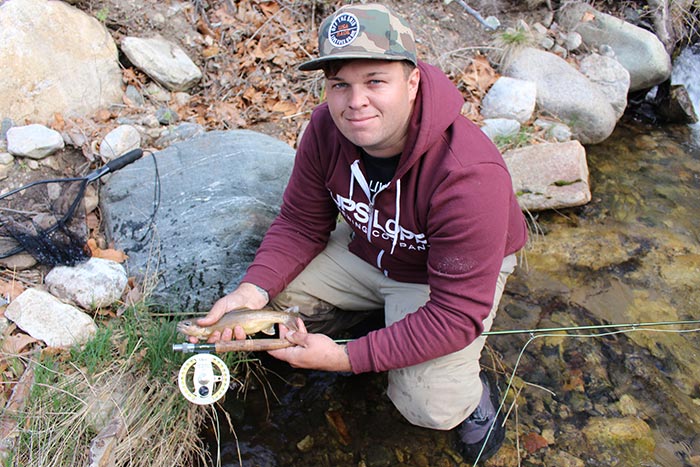 That first fish out of the way was a great feeling after all the hang ups getting to the creek.
Photo by Anastasia Coleman

My wife was on a mission to get her first fish on the line, and after she missed one, I think the pressure started to set in. It was cold, getting dark slowly, and most of the pools had someone with the same goal as us trying to get that last Gila before the season ended. Our main focus has to be our son, Sebastian. If he isn’t happy then we aren’t happy, and no fishing will be done. The cold weather meant a little more focus than normal needed to be on him, so we took turns holding the little guy while the other one fished. The challenge sounded pretty easy when we talked about it, but add in a difficult drive in, a six-month-old baby, attempting to film and take pictures, and the real challenge becomes apparent.

A few pools of fish that had already seen some pressure were making things tough, but we decided to hang out and watch the water for a while before going back to fishing. Not much more then a few minutes later, the hungry trout were back in the bubble line looking for a meal. Anastasia got her fly in the right place at the right time, and a fish couldn’t help but take a bite. With a fish in the net for both of us, the first day of our trip was a success. The pressure of completing the challenge eased for the moment, and we fished our way back to the trail. A couple more fish wanted that end-of-the day snack, and we got them to the net. 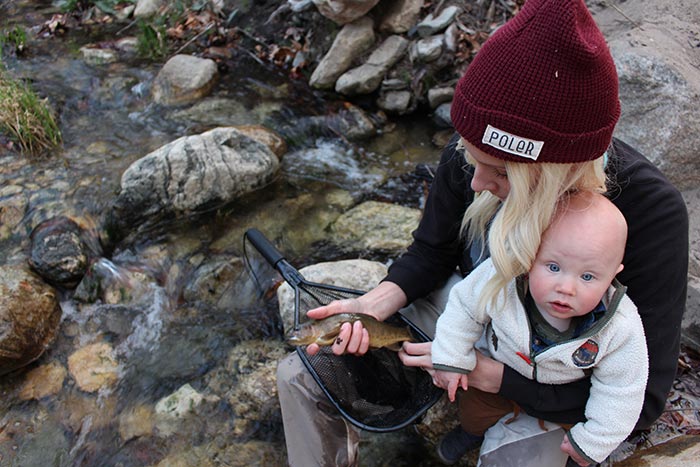 My Wife Anastasia holding our son and the elusive Gila Trout before sending the fish back on his way.
Photo by Tyler Coleman

As the sun set, we jumped back into Ricky’s truck and went on our way to the next creek. It was about an hour-and-a-half drive to where we planned to set up camp. After the long day and in celebration of a successful first stop, it was nice to hang out around the campfire and enjoy a cold drink with a good friend and my family. While it was a relief to get this day behind us, there were still four species of trout, spread throughout Arizona, that we each needed to catch in a small amount of time.

Tyler Coleman lives in Arizona. Check him out on Instagram: @thecolemancollection. Follow the Colemans’ Wild Trout Challenge experience here for the next few Wild Trout Wednesdays. 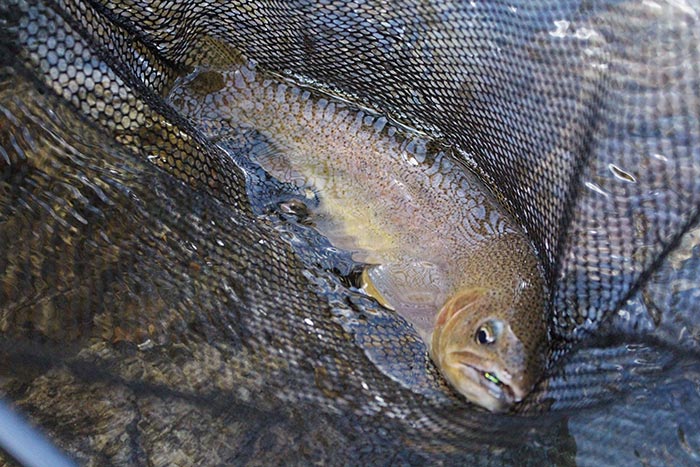 Keeping the fish wet in the net while setting up the photo helps minimize the amount of stress.
Photo by Tyler Coleman 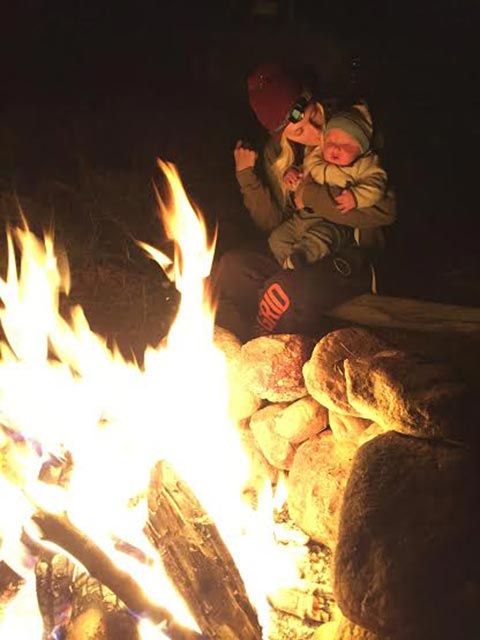 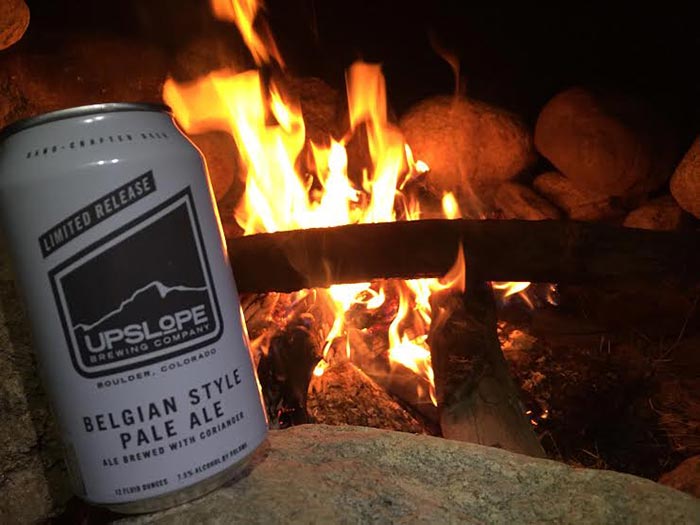 12 thoughts on “The Arizona Wild Trout Challenge, Day One”