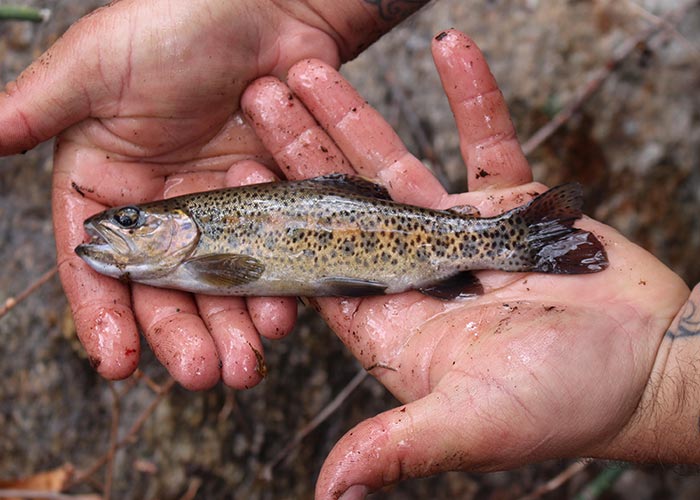 After a long start to the first day of our Arizona Trout Challenge quest, we drove to the base of a mountain near the next creek and set up camp. Waking up with the sun just climbing over the surrounding mountains, we were welcomed with an incredible view. The road ahead was far from easy, and even in a 4×4 SUV we decided it was best to park and hike the rest of the way up the stream. I had been warned by a friend that it would be easy to be distracted by all of the good pools low down and run out of time before reaching to our goal of the upper pools.

This creek is home to the Apache trout, one of the more rare species of trout in the world. These trout are only found in the White Mountain lakes or streams. At one time, Apache trout were plentiful, inhabiting around 820 stream miles, but they declined until, in the 1950’s, their range was confined to only around 30 miles of stream habitat. Thanks to Arizona Game and Fish, The U.S. Fish and Wildlife Service, US Forest Service, Trout Unlimited, National Fish and Wildlife Foundation, Western Native Trout Initiative and a handful of other private organizations, the Apache Trout Recovery Program has been very successful. 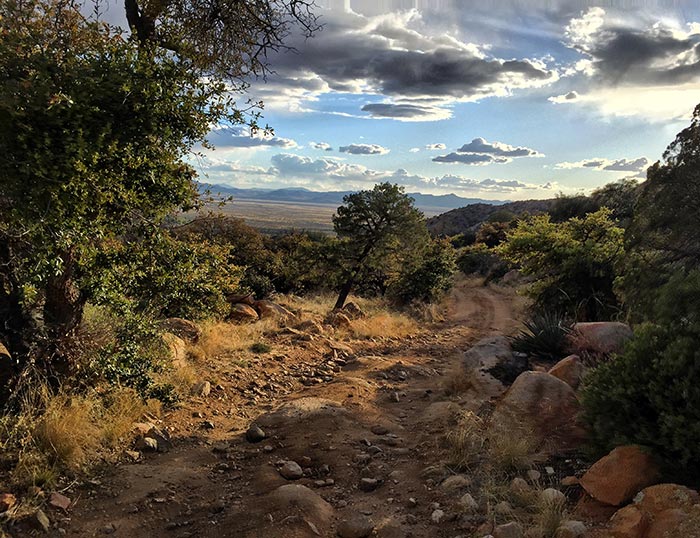 This was just the start of a pretty rough road ahead, but the reward was worth the trip.

After parking the SUV and gearing up for the day, we made our way up the trail and tried to avoid fishing the awesome pools we were passing. The temptation soon got to me, though, and I had to wander down to the creek and see what was ahead of us for the day. The first pool I found looked liked perfect habitat for the small mountain-creek wild trout. A small waterfall spilling into the pool created a nice little bubble line all the way to the tailout. I decided to make a bow-and-arrow cast right above the lip where the pool drained into another pool below. Immediately, I saw a flash and set the hook. After a quick battle, I had my first ever Apache trout in the net. We were all pretty relieved to see how aggressive the fish were, and hoped this would continue as we hiked up to the larger pools.

Another warning we had received was about mountain lions and bears in this area, so we kept our eyes moving a little more than usual. My wife, Anastasia, had done some research before we left and kept us entertained with all kinds of stories about the history of the mountains and creeks, Apache trout, and the Apache wars of the 1880s. Our main goal in the beginning of the challenge was to catch wild trout, but the more we read about the homes of these fish, the more it became about exploring the state we currently call home. 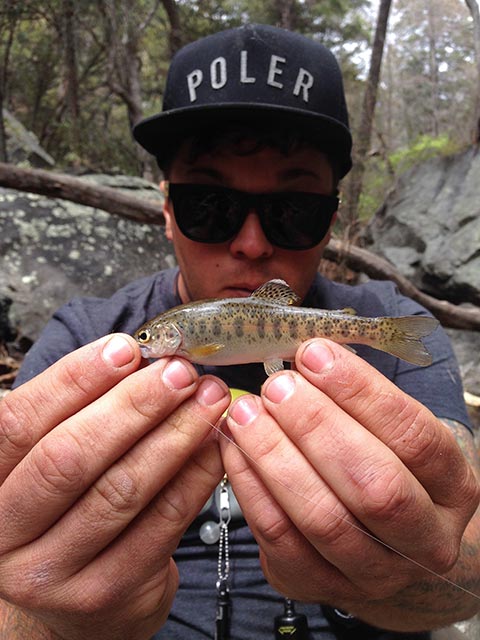 Luckily, size doesn’t matter in the Wild Trout Challenge, and a handful of these guys made for a good day.

Sebastian was ready for a break from his pack, and we took that opportunity to wander the area. We decided to head to the nearby pools and test our luck again. Right off the bat, we were into some more of these aggressive trout. It seemed that everything I have learned about where to put your fly in a small creek was paying off. Our friend, Ricky, and I took turns catching fish while Anastasia made sure the baby was full. Once he was happy it was her turn to complete the second stop of the challenge, as well. 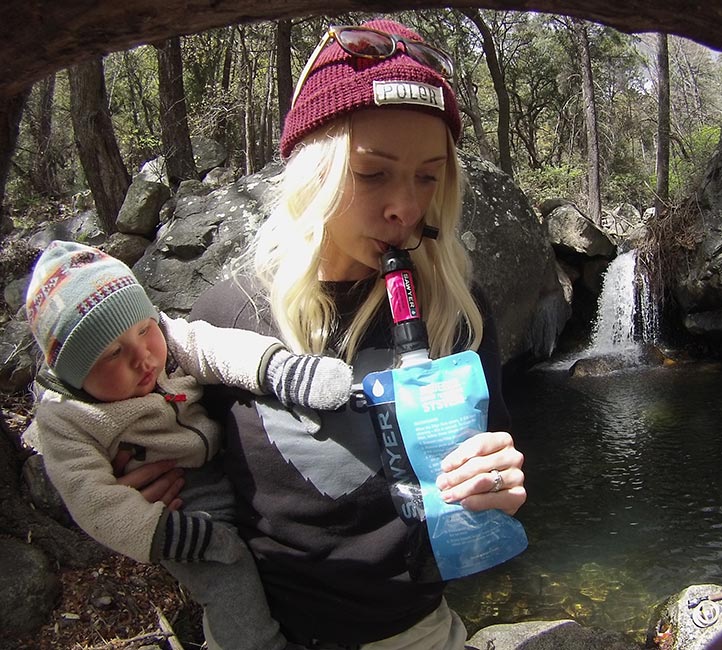 Mountain creeks have the best tasting water and this Sawyer filter makes sure we are safe while enjoying it.

These fish were hungry and would quickly come out for a bite. But timing is everything, so it took a few times before her first fish was in her hands. I sometimes forget that she started fly fishing almost a year after I did because she has progressed so fast. We are both still pretty new to the art, which gives us an advantage because we are learning together and strengthening our relationship at the same time. Teaching her and my older brother what I’ve already learned has helped me recognize those areas where I continue to struggle. We have not had a mentor in fly fishing to show us the ropes or pass along tips, so we have to rely on the Orvis Fly Fishing Learning Center for advice. It sounds cheesy but I often joke about how my fishing buddies when started out were Tom Rosenbauer and Pete Kutzer because I would watch all of their videos and then practice the techniques on the river in my wife’s grandparents backyard. Trial-and-error has been my main fly-fishing learning technique outside of what I could watch or read online. Time on the water with real life experiences can’t ever be replaced, but the information that is easily available can help you better focus your efforts while fishing. 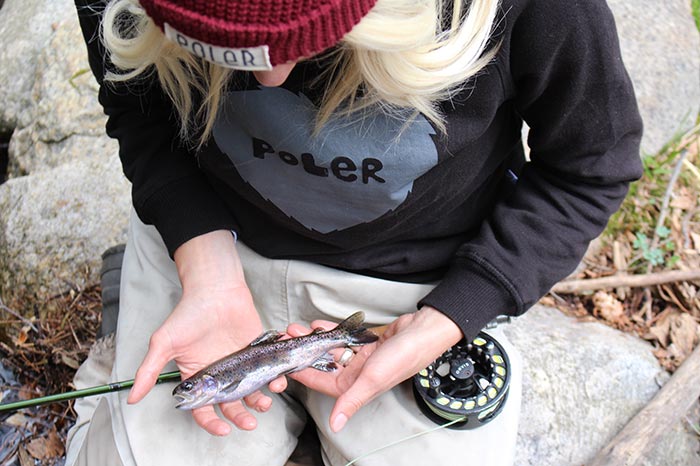 A darker substrate in the pool created a great home for this Apache trout.

Due to rainbow-trout stocking in the lower area of the creek in the 1930s, there’s been some hybridization so some Apaches show characteristics of rainbow trout. Efforts to removed the rainbows from this water have not been one hundred percent successful. The introduction of non-native fish by is a big contributor to the decrease in Apache trout, and in time this creek should recover to all purebred Apache trout. Natural fish barriers keep the upper reaches of the creek safe from hybridization, so we continued along the path, finding more and more pools with eager fish.The hybrid Apaches have a unique coloration which makes some people argue to keep them in the creeks, but the cost of losing the pure strain not worth it, in my opinion. 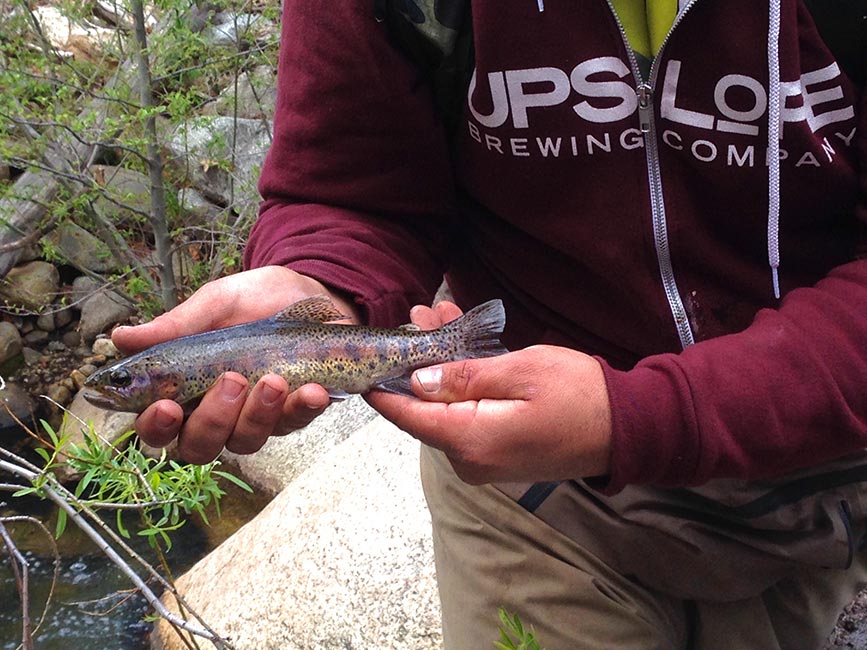 A great example of a hybrid Apache Trout from the lower end of the creek.

We reached a waterfall entering into a deep pool, which proved incredibly productive for all of us. It was nice to take a break, eat some lunch, and enjoy the show of each other catching some beautiful fish. We continued upstream, catching fish before finally turning around and making our way down the mountain. The second day of the trip proved to be the most physically tiring but it featured one of my favorite places we have fished.  It was a long but relaxing drive back to the valley, where we parted ways with Ricky, and then we headed north on our own to the next creek in search of wild trout. Here are more photos from the day and I hope you enjoy our journey.

Click here for “The Arizona Wild Trout Challenge, Day One”.

Tyler Coleman lives in Arizona. Check him out on Instagram: @thecolemancollection. Follow the Colemans’ Wild Trout Challenge experience here for the next few Wild Trout Wednesdays. 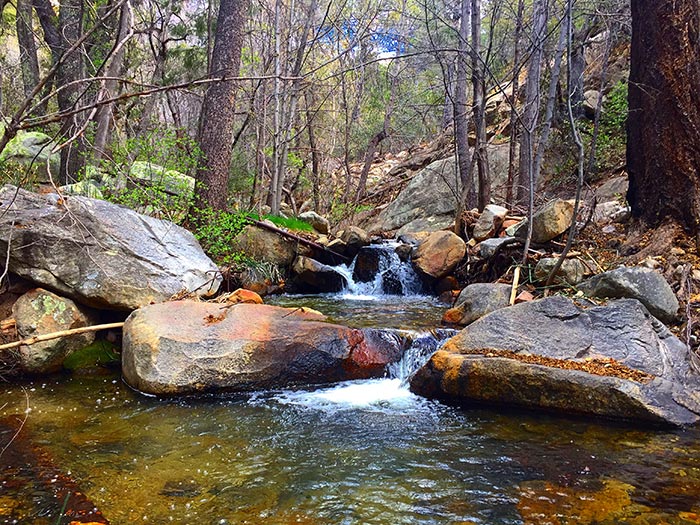 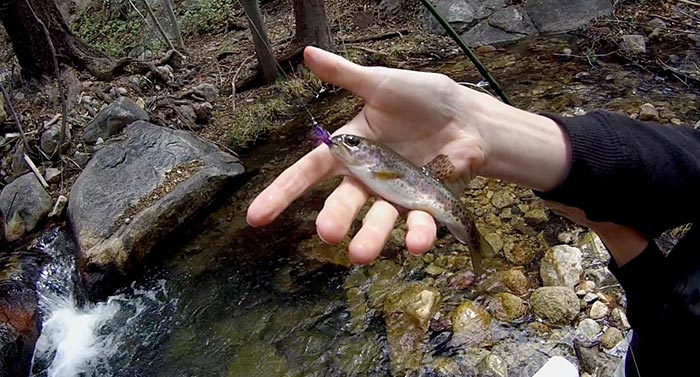 A quick Go Pro screen grab of one of Anastasia’s fish. 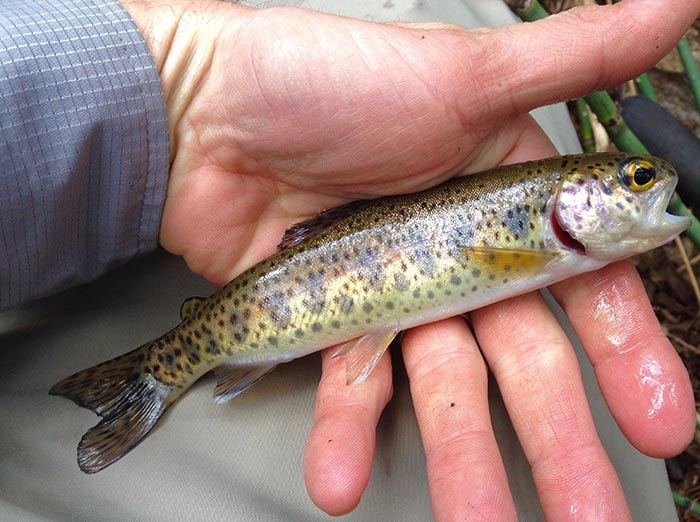 Ricky knocked another wild-trout species off his challenge list.