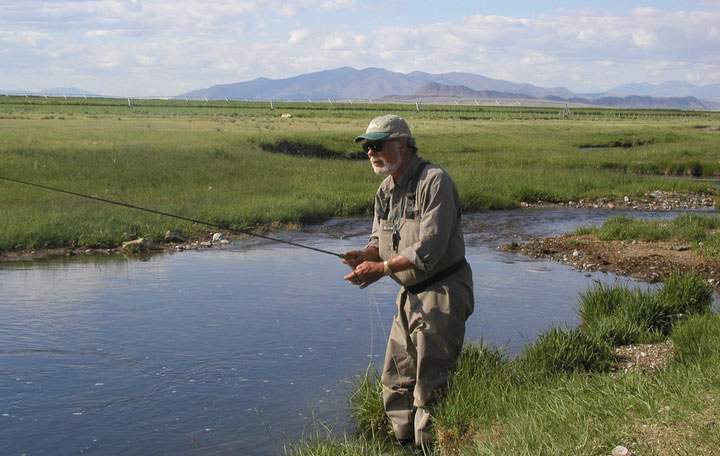 “You guys up for something different?” said Aaron, our guide, as we loaded our gear into his truck for our evening trek.

“Depends,” I said, betraying the difference between us.

“No guarantees,” said Aaron, “but the conditions are perfect.” If you’d asked me, I’d have said the conditions were rotten for trout fishing, and most especially for an evening of topwater fishing on a small farm pond. The stiff breeze would riffle the water, and the heavy gray cloud cover would make sight-fishing impossible.

“Greased Muddlers,” said Aaron. “Cast ’em out there and chug ’em back across the surface. The fish go berserk. It can be wild.”

“Sure,” said Aaron. “Except it’s for trout. I hope you don’t mind, but we’re unlikely to catch anything under eighteen or twenty inches.”

The idea of using deer-hair bass bugs and bass-bugging techniques for trout should have occurred to me a hundred times over the years. The fact that it never had reveals the power of the conventional wisdom on the differences between bass and trout.

Bass, I believed, were opportunistic and hot tempered and impetuous. They ate anything that struck them as edible. They reacted to motion and noise. They could be angered or teased or otherwise seduced into striking a lure that resembled nothing in nature. Whether a bass bug happened to resemble a frog or a minnow was irrelevant. It was all in the gurgle, ploop, and pop.

Trout, on the other hand, were selective and cerebral and wary. They scrutinized the tidbits of nourishment they found in the water and ate cautiously. The size, shape, color, and behavior of potential food all mattered to squinty-eyed trout. To catch them, you had to fool them with a fly that looked and behaved like what they were eating at the time.

On occasion, I encountered some bass—smallmouths, mostly—that behaved remarkably like trout. They sipped mayflies off a river’s surface, and they seemed to prefer flies that looked like the insects that were on the water.

Over the years, I’ve met trout that behaved exactly like bass, too—trout that turned and slashed reflexively when I plopped a big hopper behind them, trout that rolled on a streamer the instant it hit the water, trout that followed and hit a dry fly when I dragged it back across the surface to recast. But my assumptions about trout psychology prevented me from recognizing what I was seeing.
When I was a teenager, my father and I often fished Vermont’s Otter Creek, near Middlebury College, with Harold Blaisdell. Our favorite technique for those big rainbows and browns was to skitter large, high-floating dry flies down and across the current on a tight line. The trout chased them and swirled at them, missed them and hit them, and we busted off more of them than we landed.
I recall thinking that those trout acted a lot like the predatory largemouths and smallmouths I liked to catch on bass bugs. But Harold and Dad explained to me that our skittering dry flies imitated the caddisflies we saw skating on the water. You caught trout by imitating what they were eating, of course.

Every year for a quarter of a century, Dad and I floated a pastoral river near his home in New Hampshire a couple of times every season. We took turns steering his little thirteen-foot Grumman from the stern and casting from the bow. The only fly we ever used was a Cooper Bug, which is a trout-size version of the famous Devil Bug that Orley Tuttle invented to catch bass (which should have been a clue). We would roll-cast the Cooper Bug against the banks, into riffles and current tongues, and twitch it down and across. Those pretty little Pine River brookies gobbled it.
We figured those trout ate our Cooper Bugs because they imitated terrestrials—the beetles, ants, crickets, and inchworms that plopped off the banks into the water and twitched and struggled in their alien environment.

Dorman, an Inuit guide, introduced me to catching trophy Labrador brook trout on deer-hair mice. The technique was identical to skittering dry flies and twitching Cooper Bugs. We’d cast the fly to the other side of the stream, hold the rod high, and wake it across the current. Those monster brookies came slashing and crashing, furious and seemingly mindless–more like pike or bass than trout.
“They think it’s a lemming,” explained Dorman when I commented on the decidedly untroutlike behavior of the fish.

I’ve caught trout by twitching big hopper and cicada patterns at times of year and in waters where none of those naturals was evident, and my only explanation has been that the fish “remembered” how nourishing the real things were. My flies imitated the image of a specific food item in the trout’s memory, I figured.

It didn’t occur to me that—at least sometimes, under some conditions—big trout could be just as impetuous as bass, or that they might go for any big mouthful of something that looked alive, or that bass-bugging methods might be a good way to catch them.

So as we bumped up the dirt road to the old farm pond that summer evening, it was natural that I’d ask Aaron what our greased-up Muddlers would be imitating, that the trout would want to eat them.
“Imitate?” said Aaron. “Wounded minnow? Frog? Mouse? Dragonfly? Take your pick. Personally, I don’t think they imitate anything. I think the noise and the motion just triggers some subconscious predatory impulse. These fish aren’t thinking. They’re reacting.”

When Aaron parked his pickup truck beside the little pond, I saw that it’s the water’s surface was gray and wind-riffled and altogether uninviting. 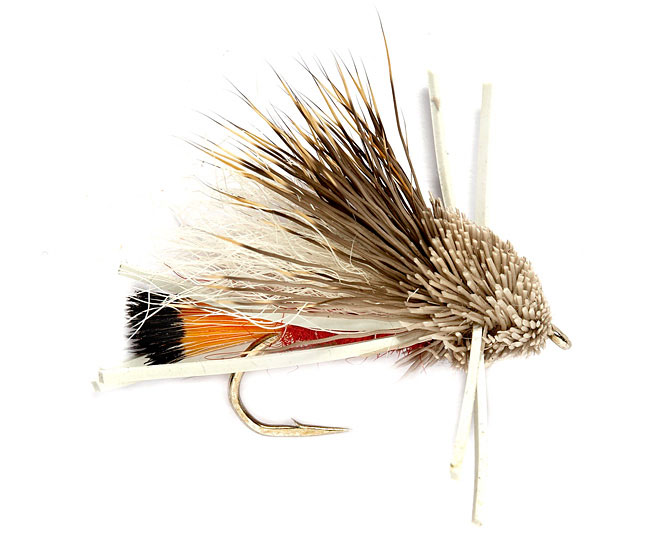 A Turck’s Tarantula floats low and pushes a lot of water when you chug it.
Photo via orvis.com

We strung our 8-weights and climbed onto the berm that the farmer had bulldozed to dam the brook that fed the pond, and I was still tying on a size 6 Marabou Muddler when I heard Jon whoop.
When I looked up, I saw a hole in the water. “What was that?” I yelled.

There was a tremendous ker-slosh, and Jon’s rod bent double. Then a rainbow trout shot into the air. It was at least two feet long, and it looked like a tarpon, arced high over the little pond. When it hit the water, Jon’s rod went limp, and so did he.

I did. It didn’t make tying on a fly any easier.

For the next couple of hours Jon and I double-hauled big floating flies and jerked them back across the riffly surface of the pond, and big trout kept chasing them. They swirled, splashed, struck, and we missed some and hooked some and busted some off, and when it was finally too dark to see, we’d each landed four or five fat rainbows, including several well over twenty inches long.

We chugged floating bugs over trout ponds several other times that week, and I drew some tentative conclusions about the method:

I’m not prepared to give away my dry-fly and nymph collections to specialize in bass bugging for trout. But I am eager to try standard bass bugs and bugging methods on other trout waters—big rivers, lakes, even spring creeks. Anywhere big fish live. Hereafter, an assortment of deer-hair bass bugs travels in my trout vest wherever I go.

2 thoughts on ““Bass-Bugging for Trout” by William G. Tapply”