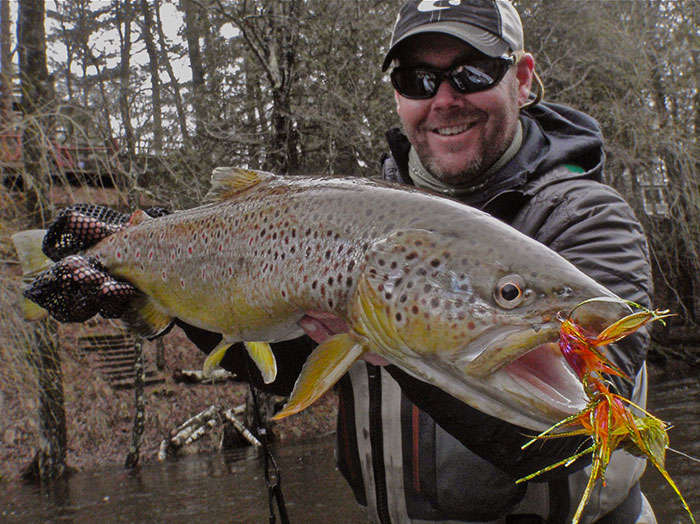 Guide Tommy Lynch shows off a beast of a brown trout that fell for his D&D pattern.
Photo courtesy Tommy Lynch

When I was a kid, I always caught my biggest trout of the year on Rapala lures, which do such a great job mimicking baitfish. In many ways, when I am fishing and tying streamers, I am trying to recreate the attractive swimming motion of those lures, giving the fish something realistic to chase down and eat. Many traditional meaty streamers—and even newer patterns—are variations on the same theme, using weight at the front of the hook to impart action. Think of all the conehead, beadhead, and lead-weighted flies you’ve ever used. Looking at these patterns in the fly bins at a shop, they individually look cool and different, but they are all limited by the same kind of “recovery action”: in the water, the fly moves upward when you strip it and downward when you stop. Up, down, up, down, which is basically a jigging motion.

What I always loved about the Dahlberg Diver pattern was its ability to recover three ways to my one strip: it dives, floats, and wiggles side-to-side. I was frustrated by the fact that my weighted streamers, though productive for a Western bank-banging approach or for small-river jigging, forced me to work harder to impart a unique action during the retrieve. I wanted something that tipped and yawed like a Rapala as it was retrieved: I was tired of throwing the next size up of a weighted fly, and my shoulder hurt from trying to give that fly action. Ultimately, a great streamer should swim, not fall. 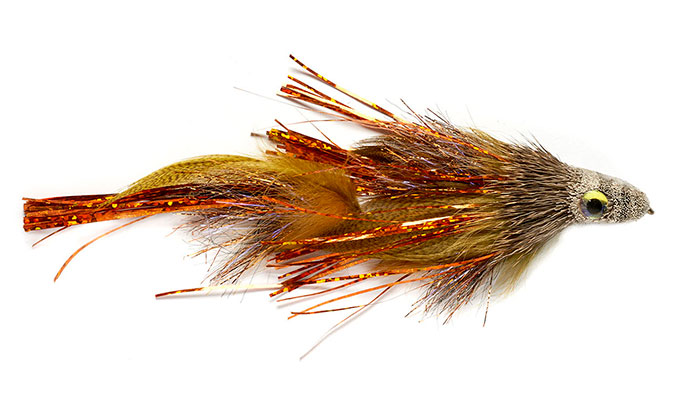 The articulation, deer-hair head, and undulating materials give the  Drunk and Disorderly incredible action.
Photo via orvis.com

The concept for the Drunk and Disorderly came to me one night while I was falling asleep, trying to imagine what I saw when I was fishing those Rapalas as a kid. What I envisioned was a fly that swims differently with every strip to mimic an injured baitfish to trigger the predatory “injury response” from a big browns. It took me about a year and a half to fine-tune the pattern to where I wanted it to be. I wanted the pattern to be large but easy to cast, with a profile that matched natural baitfish—largest near the head and slender towards the rear—and plenty of fish-attractive recovery action. I knew that to accomplish all these, I’d need to carefully consider each material and how it would perform in the air and in the water.

Early versions of the pattern had marabou instead of flash, but marabou—as much as I would use it with weighted flies because it “parachutes” the fall—doesn’t work well for a fly that can swim and rudder because marabou dampens those actions. I didn’t use enough flash at first, either. I think most streamers don’t have enough flash, even though it’s one of the things that makes Rapalas and spinners so effective. You only see minnows and fish when they are injured and flashing as they show you their sides. To mimic that result you need flash, not more bunny or marabou. Getting the amount of deer-hair was critical: too much on a small of a fly, and too little on a big fly cause the pattern to either spin or push water. I didn’t want the head to just push the water, but to cut and dig the water, as well. Ultimately, I found that a “door wedge” design worked best. Limiting the amount of material behind the head was key to the overall action and for ease of casting it. You don’t want to feel like you need rotator-cuff surgery at the end of a day of streamer fishing.

Initially, I didn’t have as much faith in the Double D as I do now, but it didn’t take long to change my mind! Once I got the materials right, after a few months of running the, I found myself rolling the fish up to three and four times before they got to the boat—and in the Pere Marquette and Upper Manistee, that is just a short distance, so you could tell they really wanted it. These attacks reminded me of another presentation chase I use to see: that of a Rapala assault! It’s a mistake to confuse a miss with a refusal; when a fish authentically wants a bait, it will come back more than once until it at least feels the hook or runs its head into the boat. What I noticed immediately with the Drunk & Disorderly was that the fish wanted it badly and that the other patterns that had been sharked on once and left alone, which I thought were working well, were really just getting high-speed refusals.

With each streamer trip I took, I learned more about the pattern and its effectiveness, and clients started demanding it. The Double D’s have and continue to temp huge Pere Marquette brown trout with regularity. Several browns over 24 inches have fallen for the big fly, along with hundreds over 20 inches. When you retrieve the fly, strip very sharply but short and with no rhythm. One pop, followed by three short strips, and then let it swim and “die out” before the next different series. Another approach, one that works great for triggering fish that are wooded and need a kick in the butt is the “down swat,” in which you come tight and then sharply jerk the rod tip downward. The beauty of this pattern is that—because of its erratic motion—you can retrieve it a million different ways. And most of them will trigger strikes from big fish!

Tommy Lynch runs The Fish Whisperer guide service in Baldwin, Michigan. The Drunk and Disorderly is available from Orvis here.

Editor’s Note: While Tommy’s video above is fun and shows how the man himself ties the fly, this video from Laurence Paradis walks you through the tying steps in a much more deliberate fashion.