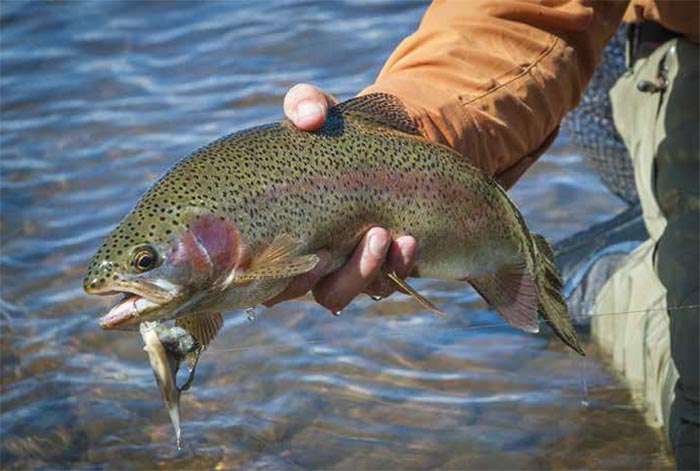 This fat rainbow fell for a Bunny Streamer fished with a fast retrieve on Colorado’s Yampa River.
Photo by Jay Nichols

[Editor’s note: This is an excerpt from Tom Rosenbauer’s book, Orvis Fly-Fishing Guide, from Lyons Press. This is a complete, soup-to-nuts revision of Tom’s classic, with lots of great new information and killer photographs.]

Streamers can be fished just like nymphs and wet flies—across-stream, upstream, and downstream. Streamers will take fish all of these ways, even dead-drifted directly upstream. They are most effective, however, when you give them some manipulation, either by stripping in line as they drift or by pumping the rod tip to give them life.

Streamers are usually used when nothing else will attract the trout’s attention, in high, dirty water, in the cold water of early season, and in very fast, broken water where smaller flies aren’t visible.

You can cover a lot of water with streamers, because a trout will usually take your streamer on the first drift, or at least make a pass at it. If he’s not interested, no amount of repeated casting will make him strike. If he swirls at your streamer but doesn’t take, try one of a different color, or one that’s slightly smaller than the one you’re using. Some fly fishers also use streamers to locate trout, returning later with a standard dry, wet, or nymph.

A popular way to fish streamers is to cast directly across the current to the far bank, stripping in line in foot-long pulls as the fly swings around in the current. This is one of the most effective ways of float-fishing large western rivers. Strikes to this kind of presentation will be quick and vicious, and the fish will usually hook themselves because of the tight line. Although there is not much finesse involved, introducing some strategy into your presentation will get you more strikes. First, make sure that you cast your fly right to the bank. Big trout, particularly brown trout, will lie very tight to the bank, where there is protection in the form of boulders and logs. Sometimes, the difference between casting 5 feet from the bank and bouncing your fly right off the shore will make the difference between a great day and a mediocre one. 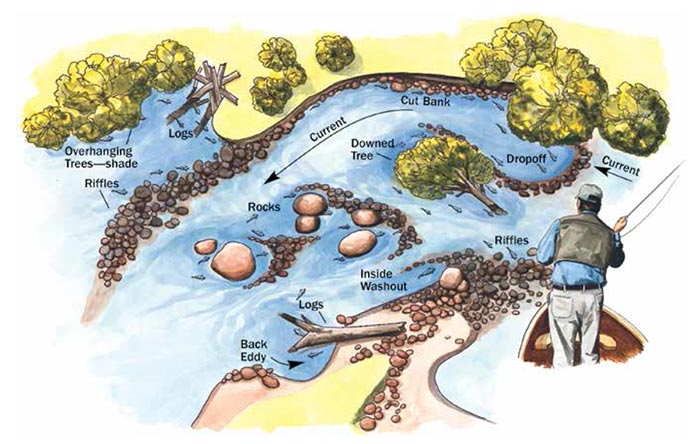 When fishing from a drift boat or on foot, make sure to hit these spots where trout lie in wait to ambush baitfish.
Illustration by Bob White

The other consideration is the direction your fly swims in relation to the current. Regardless of the angle between your cast and the bank, make sure that the fly swims broadside to the current, or if not broadside, at least in an upstream direction. A fly that darts downstream, right into a trout’s face, is more likely to frighten your quarry than tempt it. Baitfish don’t attack trout, and a baitfish that moves toward—rather than away from—a trout is cause for alarm. Sometimes you can make your fly swim broadside just by the angle at which you cast, but sometimes, particularly when casting to the bank from a moving drift boat, you have to shoot a quick cast upstream of the boat. Just stripping in line will make your fly dart downstream, so the best thing to do is to throw a hard upstream mend just after the fly lands, so that as you begin stripping, the fly swims broadside to the current.

In rivers with very fast currents, you should angle your cast downstream to slow the swing of your fly. This works well with a sinking line, but with a floating line it often makes the fly skim just under the surface, too shallow to interest most trout. Just as in nymph and wet-fly fishing, casting slightly upstream or using a sinking-tip or sinking line will also make your fly ride deeper and slower. In very deep or fast water, try casting upstream and across, then mend the fly upstream several times while the fly sinks. You have to cast well ahead of where you think a trout might be lying, but by the time the fly gets below you, it will be much deeper than if you just cast directly across the current or cast at a downstream angle.

A deadly method of fishing streamers, although one that isn’t used very often, is fishing them directly upstream. Try to retrieve line just slightly faster than the current, so that your fly darts along the bottom in little fits and pauses, just like a sculpin or crayfish darting from one rock to another. This technique is often more effective if you attach a small nymph behind your streamer, just as you would when fishing a pair of nymphs. 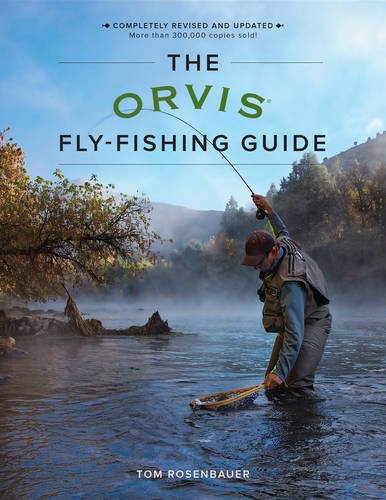 The revised edition of Tom’s classic is practically a new book.

Streamers will also work when cast directly downstream. You can just let your fly hang in the current, using the current to give it life. You can also flip your rod back and forth, making the fly swim from side to side in the same spot. If this presentation doesn’t work, try retrieving your streamer back upstream by stripping in line. Try short, quick pulls; long, steady pulls; or even erratic strips. One of these approaches may appeal to the trout.

Dead-drifting a streamer along a bank so that its profile is perpendicular to the current works great wherever there is very roily water or a sharp drop-off. When you are dead-drifting a streamer, use your line to control the fly, as you would when fishing a nymph. A high-sticking technique works great when you want to float the streamer along an undercut bank or through a deep slot between two boulders. The advantage of a streamer in these situations is that the take is not subtle. When a trout attacks a baitfish, it almost always does so aggressively—no strike indicator necessary.

Using a streamer to imitate a stunned baitfish that has just been washed over a waterfall or through the turbines of a dam is among the simplest fly-fishing presentations. All you have to do is cast the streamer into the boiling water at the base of the waterfall or dam, give the fly enough slack that it can be bounced around by the wild and competing currents, and then hold on. The trout have figured out that the trip over the falls or through the dam’s turbines leaves the baitfish injured or just temporarily paralyzed, which makes for easy pickings. Don’t worry about missing the strike; the fish usually takes up all that slack in the first seconds of the fight.