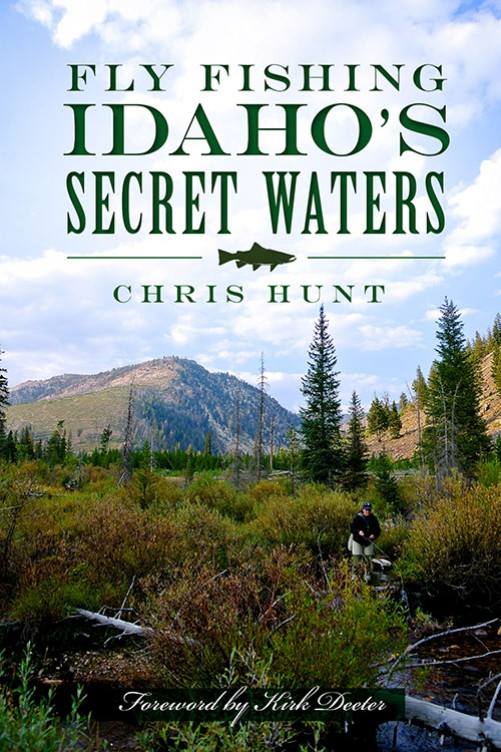 [Editor’s Note: My friend Chris Hunt, National Communications Director at Trout Unlimited, has just published a book called Fly Fishing Idaho’s Secret Waters, so I asked him if we could post an excerpt. We’ll start with a bit from Chapter 2 that explains what the book is about, and then move one to one of the waters he describes. If you live in or near Idaho—or if you plan to head their to fish—this is one book you won’t want to miss.]

[C]onsider the fishy bounty contained within the Idaho backcountry—the trout and char that might see only a few flies, or no flies, over the course of a fishing season. Imagine the beauty and the untracked, untrashed places where wild fish swim.

This is the secret Idaho. And it’s yours. All 9 million acres of it on U.S. Forest Service land, and millions more found on Bureau of Land Management property belong to every single American as a birthright. It could be easily argued that protecting it in perpetuity is in the best interest of every angler willing to step off the pavement in Idaho and explore a little bit. I certainly believe that to be true.

When I set out to write this book, I heard a lot of people gasp at the notion of sharing “secret waters” with anyone willing to drop a few bucks at Amazon. Secret fishing spots, they said, are paid for in shoe leather and cold January nights spent combing over the gazetteer. Secret waters are proprietary, I was told. If people want to discover great backcountry fishing, let them pour over maps on their own.

There’s so much water in Idaho that the waters I’ll describe in this book will truly amount to giving anglers a short head start on their own journey to discover backcountry treasures filled with wild fish and experiences we all thrive to uncover. What’s more, our backcountry and our backcountry trout deserve the appreciation of anglers who, without a bit encouragement, might not venture very far from the blacktop to chase fish. The more anglers who experience the backcountry, the more allies our wild fish have when it comes time to beat back a bad idea or stand up to those who don’t share our conservation values. Anglers—and hunters—are more and more important in the conservation discussion all across America. If this book encourages one angler to wander down a lonely trail and marvel at the wallpaper along a backcountry stream, it’s worth it. If it gives one angler the motivation to write a letter to Congress or craft a letter to the editor of her local paper when that action is needed to protect the backcountry and our Idaho way of life, it’s worth it.
Secrets? Sure, a few. But the real secrets of Idaho are still out there, awaiting the wandering fisher who, armed with a 3-weight and a box of dry flies, can literally step back in time and experience the best of Idaho.

But, perhaps to satisfy any potential critics—or at least to partially salve their concerns—I’ve refrained from offering specific instructions to the places I’ll describe in the pages to come. Rather, I’ve simply offered general directions and the page number in the Idaho edition of DeLorme’s Atlas and Gazetteer. Certainly a little map won’t hurt the average angler—in fact, my hope is that it will inspire anglers to find blue lines on the map that I haven’t mentioned. These, of course are the real secret waters of Idaho.

There are a lot of fishable streams out there. Enjoy this head start—or as my son would say, the “cheat code.” I think you’ll find it valuable, but I hope, rather than just fishing the places I’ll describe in the pages to come, you’ll be inspired to wander up lonely trails along those blue lines on the map. If you do this, you’ll find something much more valuable that secret fishing holes… you’ll find the Idaho I adore. I think you’ll come to love it, too. 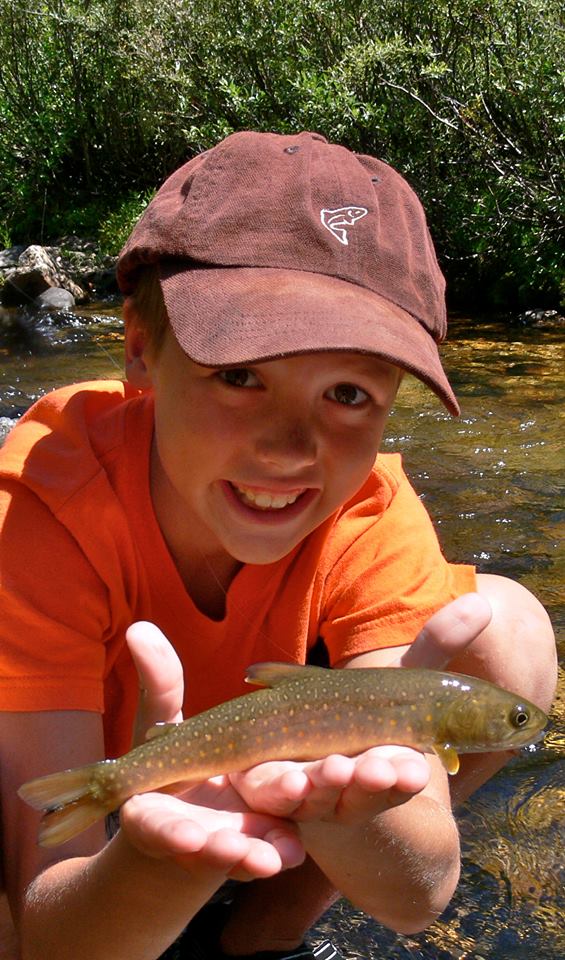 This diminutive bull trout from the Little Lost is a native gem.
Photo by Chris Hunt

The Little Lost River
This hidden little river is one of several “sinks” streams in southern Idaho that begin as snowmelt and spring water in the Beaverhead Mountains along the crotch of the pregnant “L” in Idaho and flow out onto the Big Desert near the much-maligned Idaho National Laboratory. Once these streams—others include Birch Creek and Medicine Bow Creek—hit the porous ground of the desert, they “sink” into the lava-laden earth and don’t reappear until they come out of the ground near the Thousand Springs area near Hagerman.

The Little Lost River is one of Idaho’s true small-water treasures, and while it’s surprisingly accessible, it doesn’t see much pressure. For years, my family made a habit of camping at the Mill Creek campground in Sawmill Canyon sometime around the Fourth of July weekend—and we had the campground all to ourselves most of the time.

Home to introduced rainbow and brook trout and the state’s most unique population of native bull trout, the Little Lost is perhaps my favorite destination fishery within just a few hours of home in Idaho Falls. The fish in the river’s canyon stretch—and “river” is misleading—are stunning and can push 15 inches or so. The rainbows in Sawmill Canyon are absolutely gorgeous—they sport a deep red stripe down their sides, and they’re very aggressive, both when chasing streamers and dry flies.

The brookies, too, are aggressive and very respectable. The river’s bull trout are largely relegated to the upper reaches of Sawmill Canyon. Intentionally targeting bull trout in Idaho is illegal—the fish occupy a spot on the federal Endangered Species List. But in this stretch of water, even when fishing with dry flies (bull trout are notorious piscivores—they eat other fish), catching a bull trout is a very real possibility. And some of these native char get quite large for the water they occupy—a few years back, my son Cameron caught one on a grasshopper pattern that pushed 17 inches (as per Idaho law, the fish was quickly released).

Farther downstream, the river exits Sawmill Canyon and flows south along a stretch of idyllic Western landscape dotted with sage. In this stretch, the fish get a bit bigger, and trophy trout fishing becomes a real possibility, particularly for rainbows.

But, for me, it’s the backcountry stretch of the Little Lost and a couple of it tributaries that draw me back year after year. High in the river’s headwaters, the road up Sawmill canyon comes to an end, and the only way to get to the water is walk among the willows and the downed timber left behind from a fire some years back. The river—little more than a trickle by late summer—is alive with feisty rainbow trout and bull trout, and they’ll both hit high-floating dry flies with little hesitation.
It’s where my son, Cameron, learned how to use a tenkara fly rod—a Japanese fly rod that’s long and supple and doesn’t have a reel. In my opinion, it’s a great fly fishing teaching tool, and, truthfully, a very effective method of fishing small water.

Cameron’s tenkara rod is 11 feet long, and the specialized line connected to a “lillian” at the rod tip is about 12 feet long. This form of fly fishing allows the angler, in close quarters, to present a fly to wary fish with nothing but the fly on the water. And, without a reel or the need to manage line, it removes some of the complexities from the craft without taking away from the enjoyment of fly fishing.

Cameron was 10 when he and I made the drive to the Little Lost. As we wandered among the willows, we spooked a cow moose and her calf—thankfully at a safe distance—and watched for a time as one of the stream’s many beavers repaired a leaky dam, courtesy of a late-summer deluge the day before. 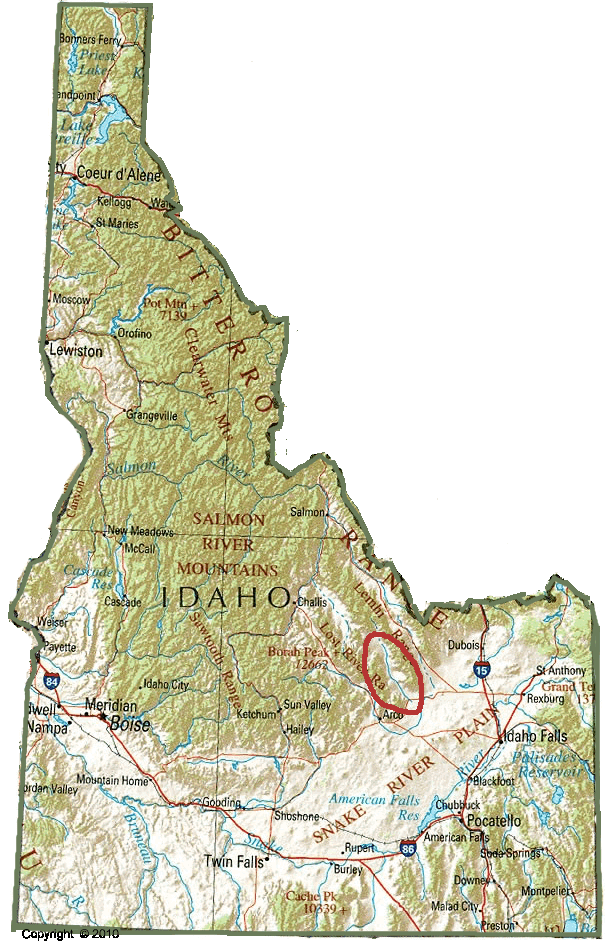 The Little Lost River flows south out of the Beaverhead Mountains toward the little village of Howe, Idaho.
image via statetopomap.com

In time, my son was handling the Japanese rod without any assistance from me, and when he connected with his first bull-trout—a beautiful 10-inch fish that hit a Royal Coachman in a foot of water—he beamed from under the brim of his hat.
We fished the upper reaches of the river most of afternoon and into the evening, wandering well away from the end of the road and relishing a slice of Idaho backcountry that will remain special—to both of us—for years to come.

There are some unique aspects of fishing the sinks that most anglers won’t consider—not because they’re not interested, but because the natural history of these water is not well-known.
First, it’s likely that at least some of the sinks drainages were fishless before trout were introduced into them. Second, there’s an ongoing debate over how bull trout ended up in the Little Lost River. Technically, there’s no connection between the Little Lost and the Snake River below Shoshone Falls (where bull trout would be considered native). The explanations vary.

The other explanation is much less romantic (but just as likely, if not more so). Years ago, when the first settlers came to the Little Lost River Valley, it’s possible that they transplanted fish from the Pahsimeroi into the fishless Little Lost. That would explain the presence of bull trout, and perhaps the rainbows (are the Little Lost’s rainbows the progeny of Salmon River steelhead?) The river’s brook trout are likely the product of an organized introduction effort on the part of fisheries managers years and years ago.

Either way, bull trout live in this isolated drainage, and they enjoy the protection they deserve in these waters. For me—and for my son—this place is magical. If you ever have the chance, I’ll wager you’ll find the Little Lost to be just as special.

Flies
The Little Lost’s trout aren’t terribly picky—a theme you’ll find among most backcountry trout. Early in the season, try swinging a wet fly like a Rio Grande King or a Stayner Ducktail through runoff-swollen water. As the summer progresses, switch to attractor dries, like Stimulators, Adams and Royal Coachmans. Later in the summer, particularly in the valley of the river, go with high-floating foam hoppers, beetles and ants. Higher up, simply use smaller versions—the terrestrial hatch all along the Little Lost in late summer is prolific.

Gear
For streamers and fat hoppers, use a 5-weight with floating line. Higher up, go light with a 3- or 4-weight rod and floating line. If you’re interested in giving it a try, use a tenkara rod—the Little Lost is the ideal experimental laboratory for this method of fly fishing, and, if you’re like me, once you try it, you’ll want to keep trying it.

Location
The Little Lost River is a sinks stream that flows south out of the Beaverhead Mountains toward the little village of Howe, Idaho. It can be found on pages 38, 39 and 46 of the DeLorme Atlas and Gazetteer, Idaho Edition.