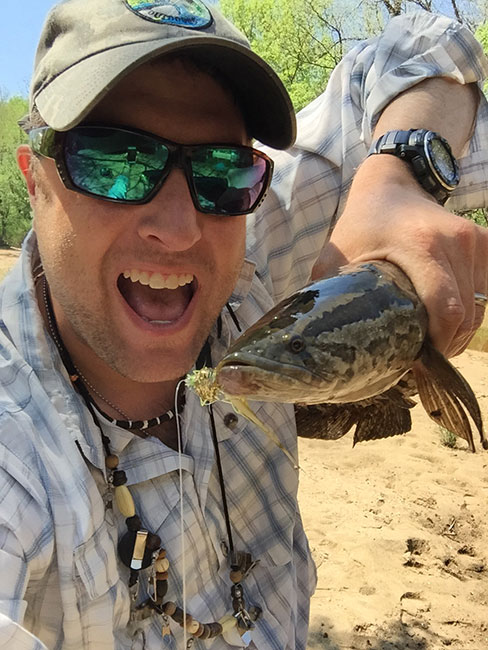 Once he figured out the pattern, the author was into a pod of northern snakeheads.
Photos by Rob Snowhite

I rarely have the opportunity to fish. I can count on my fingers the number of fish I have landed since in the last year. But when I do get a chance to fish, I target northern snakeheads in the tidal Potomac River. You could say I have an obsession with snakeheads. We don’t “blue line” out here—our water is murky—but instead we “brown line” for snakeheads. These fish continue to amaze me. They seem indestructible: My friends chipped one out of a frozen chunk of the river in February, and it started to flop about.

I knew I’d have some free time this weekend to fish, but I wasn’t sure when or where to fish until I got a text from Morgan of Tight Line Tales of a Fly Fisherman. Today was one of those rare days off. No kid, no clients. Morgan had sent me a picture of a northern snakehead caught on a 3-weight. The fish was in one of those spots you are not allowed to mention—a location X so valuable you keep it mum. Morgan shared the location via Google Maps with instructions not to do so to anyone else. This type of opportunity does not happen very often, and I started planning my trip. 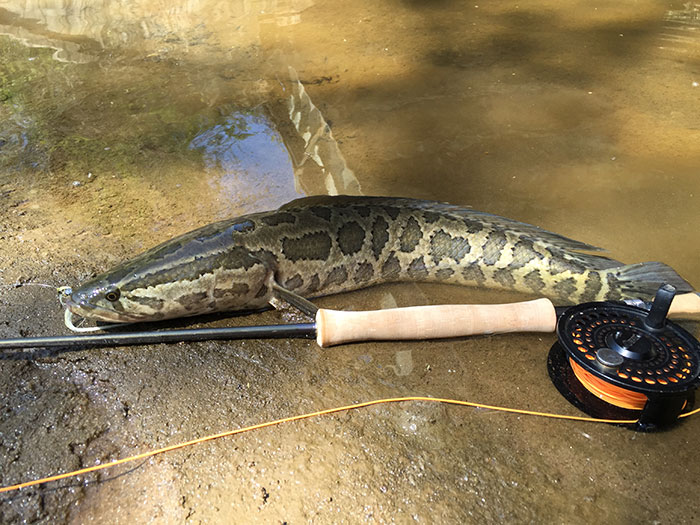 These fish are all muscles and teeth, and they fight hard.

I picked up the new Recon 7-foot, 11-inch 8-weight bass rod as soon as it was available in April. I was introduced to this rod at IFTD last summer and could not wait to get my hands on one, as I knew it would be perfect for fishing in tight quarters around DC. This rod has the backbone to toss monster flies and pull big fish out of the weeds. It’s almost like Shawn Combs designed a rod just for me.

I checked the pushpin Morgan sent me, packed my gear bag and rod and was off. I only had a few flies—some Clouser Minnows, damsel nymphs, reaper-style flies, and Gutless Frogs. I won’t say how long the ride was, but I was there fairly quickly by local traffic standards. I rigged up my rod in the lot with my trusty old DXR reel and tied a leader that stepped down from 30-pound to 8-pound test material. These fish have some nasty teeth designed for holding prey, not shredding them, so there’s no need for a wire bite guard.

I walked down to the spot. I’ll just call it a big mud hole. The lady who owns the local Thai grocery calls snakeheads “mud fish” for a reason. I waited for the fish to show themselves. The water was murky and still. I started off with the frog, with no luck. Still a brilliant fly to watch in the water. Next up was the Reaper. No love. I worked this ditch for about an hour and didn’t see a single snakehead, even though these fish prefer to breathe air and will come up like a turtle. I was ready to call it a day. 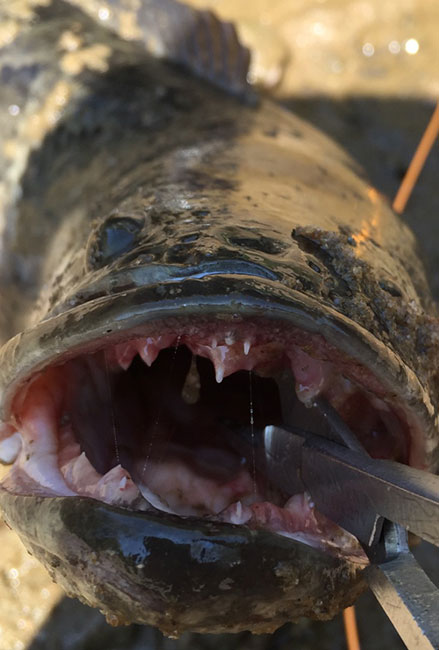 I had not seen a single fish breathe. If they were stacked up in there as Morgan had said, I’d have seen one by now. Was this a snipe hunt? At that point, I tried my damselfly nymph. Nothing. Looking for my water bottle in my bag, I came across two beat up Clouser Minnows mixed in with discarded tippet and other rubbish. I took a few steps back from the ditch and tossed the fly in there, but I hung up on a tree. Since these fish are lethargic and ambush predators, I had focused on that stump. A few casts later, though, I came tight and set the hook. I had no idea what was on the other end until the fish was about 20 feet away. I stripped in the line and took a few steps back. The fish was bending like a banana. I slid it up on the mud and ran to it. This is one species that you don’t have to worry about, when you keep them out for a photo shoot. They can survive out of water for days if they are wet.

At this point, I drank some water and just watched the ditch. I lost the first Clouser on that stump and tied on another one that was completely beat up. While I was pulling loose deer tail off the fly, I spotted two mouths come up for air. I threw my fly to the left of one of the rings and began to strip. The fish chased down the beat-up fly and sucked it in.

The fight was exhausting. These fish don’t play games. It did not want to be landed and was obviously bigger than the first. My 16-year old reel got the fish to my feet quickly, and I started taking pictures of the 22-inch fish. Some folks think snakeheads are the ugliest fish out there, but I find them stunning. No two look alike. Their heads are massive and solid bone. The rest is all muscle, and they will not open their mouth to give up your fly. I had to pry this thing’s maw open with my hemostat. 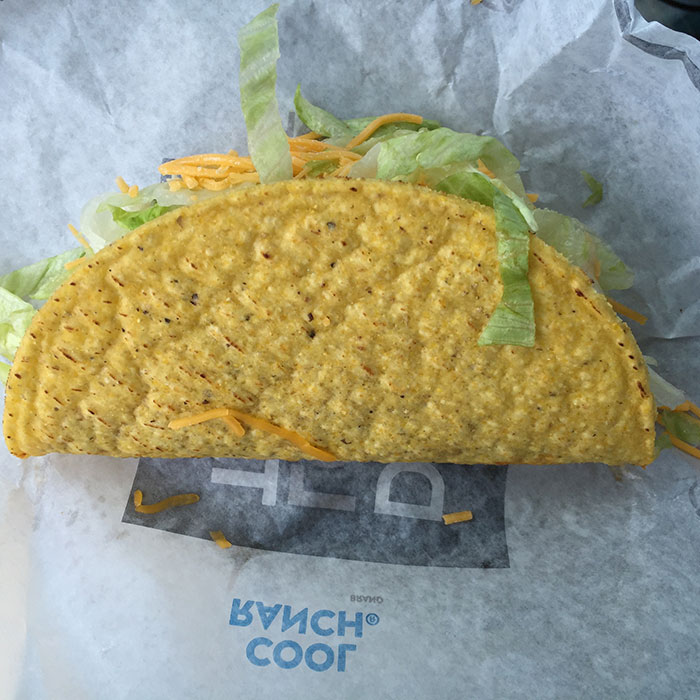 The celebratory taco tasted sweet after a great day in the mudhole.

I realized that I had been on top of those fish and was probably spooking them. Once I gave them space, they began to move about and would eat a fly. I texted Morgan and told him I owed him one. I even found one of his flies from a few days back. I got tacos to celebrate.

I’m fine with not fishing all the time as long as I am having days this good. Many thanks to Morgan and Shawn.

Rob Snowhite claims to be the only full-time fly-fishing guide in the DC Metro area. Check out his website, Fly-Fishing Consultant.