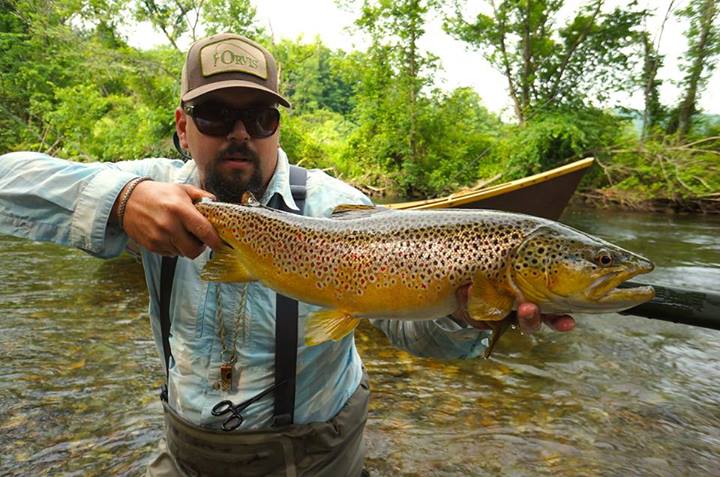 The brown trout (Salmo trutta) has earned a reputation as the wariest and wiliest opponent a river angler can face. Whereas a brookie or a cutthroat will often attack flies with gullible abandon, browns are usually more discriminating. The larger specimens, especially, are often reclusive—hiding beneath a cutbank or hunkering near the bottom until darkness falls, and only then emerging to hunt baitfish. Because of these sporting qualities, the species has been stocked in waters well outside its range, a result of the recreation craze and empire-building of the 19th Century. In fact, the British were so determined to bring the brown trout to Tasmania that they made three attempts to ship trout eggs around the African continent, finally succeeding in 1864. Fly fishers can now test their wits against browns on six continents.

Range and Species History
The original range of the brown trout is much larger than most anglers realize, reaching from northern Norway and the White Sea tributaries of Russia south to the Atlas Mountains of North Africa. The species ranged west as far as Iceland and as far east as the Aral Sea tributaries in Afghanistan and Pakistan. Of course, there are now wild, self-sustaining populations of brown trout in places such as New Zealand, South America, and South Africa.

Brown trout are now found all across the U.S.
Photo via USGS

The species first came to the U.S. in 1883, when a New York fish farmer named Fred Mather imported brown-trout eggs from Baron Lucius von Behr, president of the German Fishing Society. (That’s why many folks refer to the fish as German browns.) Two years later, eggs from Scotland’s Loch Leven arrived and were sent to the same three hatcheries, and the prevailing theory is that the genetic stock were mixed to create what Robert Behnke calls the “American generic brown trout.” In 1884, the release of 4,900 brown-trout fry into Michigan’s Baldwin River, a tributary of the Pere Marquette River, represented the first time the species swam free in U.S. waters.

Although there are currently no recognized subspecies of brown trout, there are three basic morphs (distinct behavioral populations within a species): those that in habit freshwater rivers (Salmo trutta morpha fario), lake populations (Salmo trutta morpha lacustrine), and anadromous forms (Salmo trutta morpha trutta). Browns that spend their lives in the ocean before entering rivers to spawn are called sea trout. The species name means “salmon trout” and described the anadromous morph. Resident and anadromous browns that inhabit the same river are genetically identical, and biologists do not yet understand why some migrate to the salt and some stay in the river.

Throughout its native range, there are populations that are considered unique, even if science doesn’t treat them as such. For instance, the ferox trout inhabits nutrient-poor lakes in Great Britain and Ireland, and the Gillaroo is a snail-eating trout of Ireland’s Lough Melvin. Some scientists from Northern Ireland consider the Gillaroo a separate species (Salmo stomachicus), while Irish authorities do not.

Records Fall Fast
In general, lake- and sea-run fish grow larger than their river-dwelling counterparts, but some tailwaters also grow especially large specimens. The all-tackle world record for a brown trout was held for 17 years by Arkansas angler Howard “Rip” Collins, with a 40-pound, 4-ounce behemoth caught from the Little Red River in 1992. But that record was then broken three times in four years. In 2009, Tom Healy landed a 41-pound, 7-ounce brown from Michigan’s Big Manistee River, followed a year later by Roger Hellen’s 41-pound, 8-ounce fish from the Wisconsin side of Lake Michigan. (Technically, Healy’s and Hellen’s fish shared the record because a new record must increase the weight by two ounces.) The current IGFA all-tackle record—a ludicrously fat 42-pound, 1-ounce slob—was caught by New Zealand angler Otwin Kandolf from Ohau Canal in March 2013. 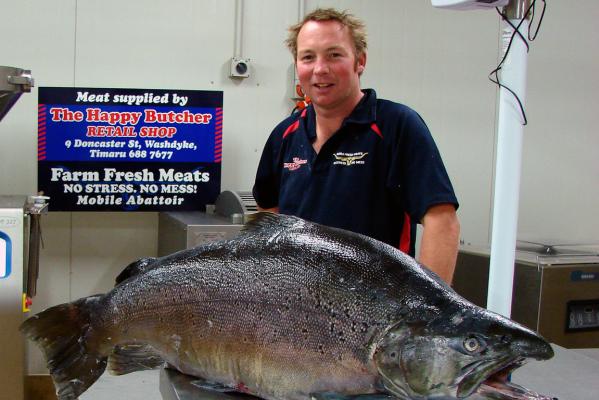 Unlikely Hybrids
When the humorous fly-fishing character Hank Patterson jokes about catching a “native brownbow,” his comment is only half ridiculous because the brownbow actually exists. Geneticists at the University of Washington first created the hybrid in the laboratory in the mid 90s, and game managers throughout the West did some experimental stocking of the new hybrid. There’s also a brake, a cross between a brown and a laker. Both of these hybrids are sterile and don’t occur in nature. But wherever browns and brook trout swim together, there’s the possibility for a tiger trout, a popular game species in the Midwest because they grow fast and fight hard. Although the vast majority of tiger trout are created in hatcheries, anglers in Wisconsin and Michigan routinely catch tigers where no stocking has occurred.

Flies and tactics
Most hardcore brown-trout anglers know that the diet of the species changes as the fish grow larger. Brown trout begin by eating mostly invertebrates (insects) and crustaceans. But as a fish grow older and increases in size, its diet begins to focus on other fish, such as suckers, minnows, sculpins, and other trout. Over the past decade, a cadre of big-fish hunters—perhaps best exemplified by Kelly Galloup—has focused on throwing huge, often articulated streamer patterns with bizarre names, such as the Heifer Groomer and the Junk Yard Dog. 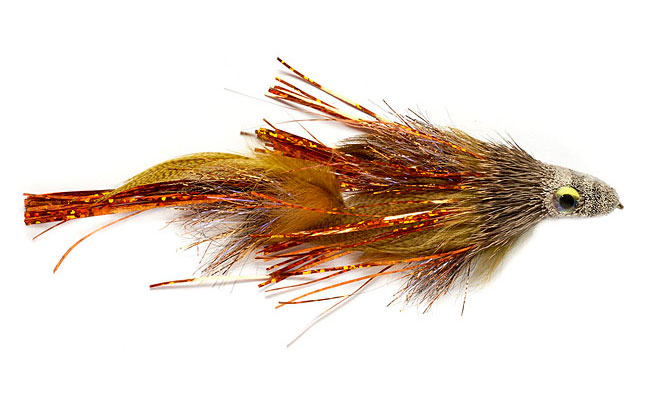 Those anglers who don’t want to heave half a chicken on an 8-weight can use large, but not monstrous streamers, such as Conehead Woolly Buggers, Marabou Muddlers, and even traditional featherwings, such as Black Ghosts. When salmon or other trout are spawning, egg patterns can also be very effective.