These high-elevation trout of the Southwest—long, lost relatives of rainbow and cutthroat trout—have adapted to their harsh environment and survived many threats.

Although one does not usually associate trout with the Sonoran Desert environment of Arizona and New Mexico, the Gila trout—as well as its close relative, the Apache trout—has survived in tiny mountain streams at elevations between 5,500 and 9,000 feet above sea level. (A third species, the Verde trout, has been lost as a result of habitat destruction and hybridization with non-native species and exists only as few dusty museum specimens from the late 1800s). Originally present in more than 600 stream miles, Gila trout have seen their range contract dramatically, as well, but conservation and restoration efforts are underway. However, a sport fishery is maintained in a few streams in New Mexico and a single reservoir in Arizona, which means that it’s still possible to add this rare species to your angling life list.

Range and Behavior
The ancestors of Gila trout originally made their way into the mountains of the Southwest by migrating from the Gulf of California during an ice age more than 500,000 years ago. As the climate and the landscape changed, their range was reduce to the high-elevation headwaters streams of the Gila River Basin. The species survived in the harsh environment by expanding its range during wet periods and retreating to coldwater refuges, such as pools fed by groundwater seeps, during droughts. As such, Gila trout have evolved to withstand harsh conditions, which is perhaps one reason why they rarely grow larger than 9 inches long. 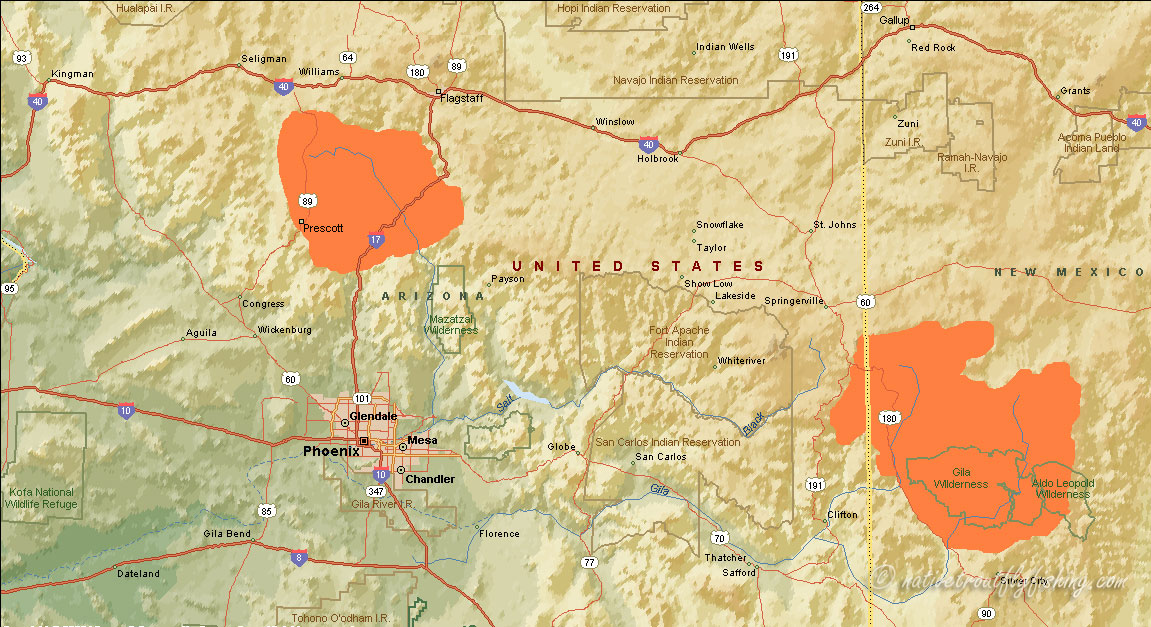 Because of the marginal and fire-prone nature of the habitat, Gila trout populations are fragile.
Map via Native Trout Fly Fishing

By the mid-1800s, the distribution of Gila trout was limited to the upper Gila drainage of New Mexico and the parts of the San Franciso River, which enters the Gila in Eastern Arizona. A population in Spruce Creek, above a barrier falls that stopped the incursion of non-native fishes, is considered the only remaining “pure” population of Gila trout. Through stream restoration and stocking, the species is now found in a number of streams in the headwaters of the Gila River and San Francisco drainages in New Mexico.  In Arizona, Gila trout have been restored to one stream in the Blue River drainage, two streams in the middle Gila River drainage, and one stream in the Agua Fria drainage.

In recent years, drought and fire have destroyed habitat in some streams, but in some way, the fires have also provided opportunities. When fire scours a stream of all life, it allows biologists to restock Gila trout without the competition from other species. This is especially important in those streams where using a piscicide would have been difficult.

Gila trout typically spawn in early spring, when water temperature is rising and runoff flows are declining. Generally sexually mature by age 3 and life expectancy may range between 4-6 years. Gila trout are capable of hybridizing with rainbow trout which has greatly reduced the range of pure populations of Gila trout.

Conservation
The extent of the Gila trout’s original range cannot be known for certain because so much of it was lost before the species was ever studied. Starting at about the turn of the 20th Century, the rise of cattle ranching and irrigation, which destroyed stream habitat, as well as the introduction of non-native species, such as rainbow, brown, and brook trout, decimated fragile populations of Gila trout. Fires, caused by drought and man, further eroded the streamside habitat. By the time the species was listed by the US Fish and Wildife Service as endangered in 1967, there were just 20 miles of habitat left. Aggressive programs of stream restoration—including the removal of non-native species and repairing streamside vegetation—have caused that listing to be downgraded to threatened in 2006. Gila trout have been restored to a number of headwater streams in both New Mexico and Arizona.

There are still a few streams where anglers can cast flies to these beauties.
Photo by Craig Springer/USFWS

Gila vs Apache
Gila trout and Apache trout seemed to have evolved simultaneously, and they were not identified as distinct species until 1950 and 1972, respectively. More recent genetic analysis suggests that they might actually be considered two subspecies of the same species or even as subspecies of rainbow trout, although this is what Dr. Robert Behnke describes as a “judgment call.” The extinct Verde trout displays characteristics of both Gilas and Apaches, so it is seen by some as an  intermediary form that resulted from a period during the last Ice Age, when the ranges of the two species overlapped and they were able to interbreed.

Flies and Opportunities
Like most trout that inhabit headwater streams where food is scarce and competition is high, Gila trout are not known to be picky or wily, so the standard assortment of attractor dry flies and nymphs will do the trick. Because populations are so fragile, game managers are constantly tweaking regulations. For 2016-17, anglers in New Mexico can catch wild Gila trout in just a single stream, Mogollon Creek. Hatchery Gila trout are available for catch-and-release fishing in several other streams, but anglers should always check the New Mexico Game & Fish website before heading out. You’ll also need a free Gila Trout Fishing Permit. In Arizona, no stream-fishing for the species is avaialable, although the state says that they may open some waters as recovery efforts bear fruit. Gila trout have been stocked in Frye Mesa Reservoir. Since this is a population not related to Gila recovery efforts, anglers are allowed to keep one fish—the only place in the country where you are able to do so.