Written by: Dan from Albuquerque 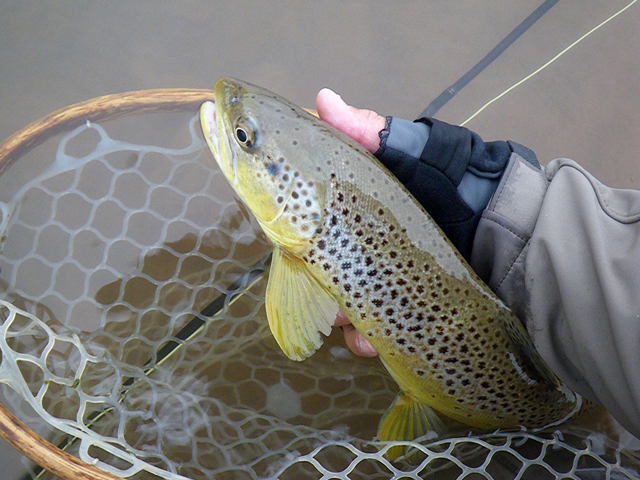 Persistence paid off for Dan, as he was able to tempt this beauty three separate times during a single day.
Photo by Dan from Albuquerque

[Editor’s note: I came across this great story from 2013 while looking for something else on the blog the other day. I thought it was worth a repost for its lessons about persistence paying off.]

Northern New Mexico went into a winter storm warning last weekend, but it didn’t officially start until noon on Saturday so I figured I could get some fishing in before the weather hit. I decided to fish the Rio Chama to see if I could find some post-spawn browns lurking around the deep holes. The weather held, only snowing very lightly, but the sun never appeared and the day didn’t get any warmer than 35 degrees. The water temperature started out at 45 degrees and warmed a little towards the afternoon, but even so, the river never became very productive for me.

However, a story unfolded that made the day a complete success, as far as I’m concerned.

My first sight of this trout was in the late morning, after I’d played and landed a slightly smaller rainbow. I had returned to the top of the run when I noticed a large, golden tail sweep through the surface film of a shallow, rocky bit of water next to the main channel. I waited a little while to see what was happening, and after a couple of minutes, I saw that there were occasional dark greenish olive mayflies sailing by. This fish was drifting up and sipping them from the surface. Since the period between the bugs was really long, I decided to first try the nymphs I was already using—a big stonefly trailing a caddis pupa—because there were a bunch of the latter on the rocks. I made a few drifts though his hole and finally my line stopped. I lifted to set the hook, and the trout rose into view and began a full body shimmy as it drifted downstream. Within seconds the caddis nymph popped out.

I mumbled a curse and tried again, but he was gone.

I fished for a couple of hours, and along the way I spotted some small trout rising to those mayflies in a wider, slower run. I tied on a size 16 BWO and had a decent time with a couple of those little guys. But now the day was running short, so I headed up to see if that big fish was ready to play some more. I left the BWO dry fly on and stretched my rod across the fast water to dap the bug above the spot where I hoped the brown had returned to. A few casts later, that dappled head rose out of the murk and quietly ate the BWO. I lifted, and she immediately shook her head and tossed the fly.

I mumbled even more curses. Disappointment settled in. Getting two tries at a fish like that is a realistic expectation, but a third? No way.

While I was dressing the fly and trying to decide if I had time to rest this spot again, I saw a trout surface and feed in the same shallow pool. Could this be another fish? It looked the same—same size, same color—maybe it was the same fish. I decided it didn’t matter. I dapped the BWO onto the water in front of her last position, and as it drifted slowly downstream she rose and took the fly. I set the hook and the trout sat still for enough time that I began to wonder if we were connected at all. Then she exploded out of the shallows into the fast water and began running downstream, jumping along the way and forcing me to scrambled across the rocks on the shore to follow. Eventually, finally, I got this sweet 18-inch brown trout fish to net.

This is why I love fly fishing.