I, probably like many anglers, have had a love and hate relationship with cutthroat trout. When I first moved to the Jackson Hole area in January of 2005, I could not satisfy my angling appetite for cutthroats. They were different, they were new, they loved to eat dry flies, and their coloration and beauty was something that was truly unique in the angling world. Also, my new home was one of the last strongholds of two subspecies of cutthroat trout—Snake River fine-spotted and Yellowstone—in the world.

However, let’s be honest: cutthroats are not the greatest fighters in the world. Sure they give you a little tug and pull, but it is nothing like their relatives—rainbow trout and brown trout—which jump or breach the water during battle. Cutts are not as long lived as some other species and don’t usually come in the true monstrous size of that trophy we all dream about and hope to catch one day in our lifetime. My local watersheds consisted of 99% cutthroat, and I began to yearn for other experiences with other trout species. 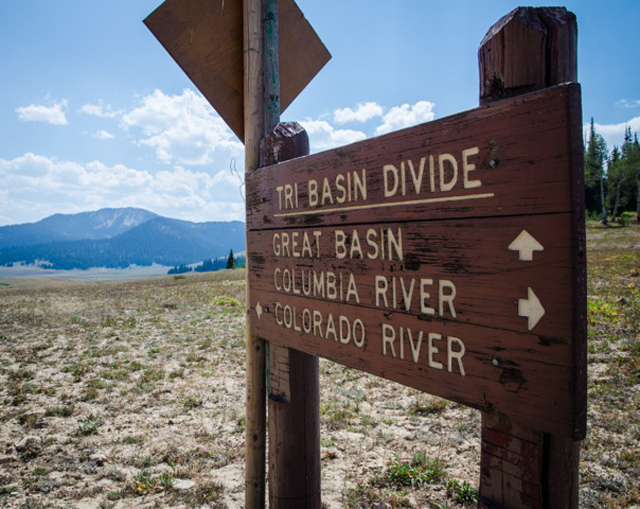 The Tri Basin Divide is where three massive watersheds come together.
Photo by Mike Dawkins

I caught my first cutthroat trout (a Yellowstone cutthroat) in the Yellowstone River in the summer of 1996. I was 14 years old. The Dawkins family had decided to see the West, and Yellowstone National Park was one of the stops on the tour. My dad and I rented some spinning rods loaded with Roosters Tails and Super Dupers from the local sporting goods mercantile next to the Yellowstone Lake Lodge and set out early in the morning before my Mom and older sister awoke. I remember catching two fish that day, both Yellowstone cutthroats.

I vividly recall cautiously standing on a logjam reeling my Super Duper back up through the currents and eddies watching dozens of cutthroats follow, slash, pursue, and sometimes connect to my lure. I was taught catch-and-release at a very early age by my dad, so both the fish went back to live another day and we were happy. 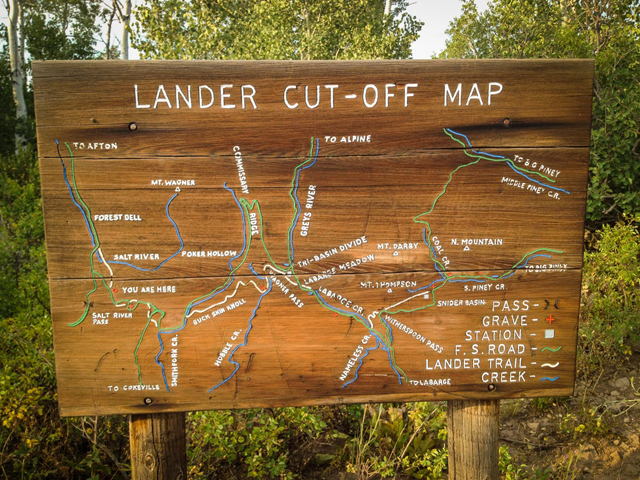 The Lander Cut-Off was the first federally funded road west of the Mississippi.
Photo by Mike Dawkins

Sadly, when I returned to the Yellowstone River in the summer of 2006 as a young and hungry trout bum determined to fish everything in my path, I didn’t find those fish; they were all but gone. I landed just one cutthroat that day, after eight hours of fishing. These fish had been here before anyone: before the Native Americans occupied the area and created their home; before the famous explorers, John Colter and Jim Bridger, were even born; and surely before you and I were even thought of being brought into this world. I had grown a new respect and love for the “Natives.”

The summer heat had been pouring it on during the month of August, and my little log home was doing the best it could to keep cool. Smoke had been pouring into Teton Valley from the monster wildfires outside of Sun Valley, other areas of Central Idaho and Northern Utah, as well as some local fires that burned much closer to my immediate community. The mighty Grand Teton was covered with a huge veil of smoke. It was supposed to hit the mid 90s that day, I was ready get out of here, and head to a higher elevation with cooler temperatures and less smoke in the air. My black lab, Tui, readily agreed. 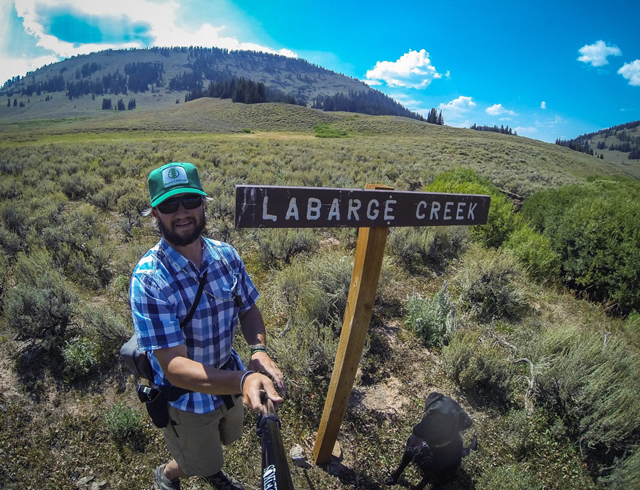 The Wyoming Cutthroat Slam had always been near the top of my bucket list. Unfortunately, it was always moved to the bottom during the busy times of summer. I had only two fish (Bonneville and Colorado) to document before my slam was complete, as I was living in the heart of Yellowstone and Snake River country. Today seemed to be the perfect day, so I loaded up the truck and headed to the Tri-Basin Divide area of southern Wyoming to check the final two cutthroats off my list. 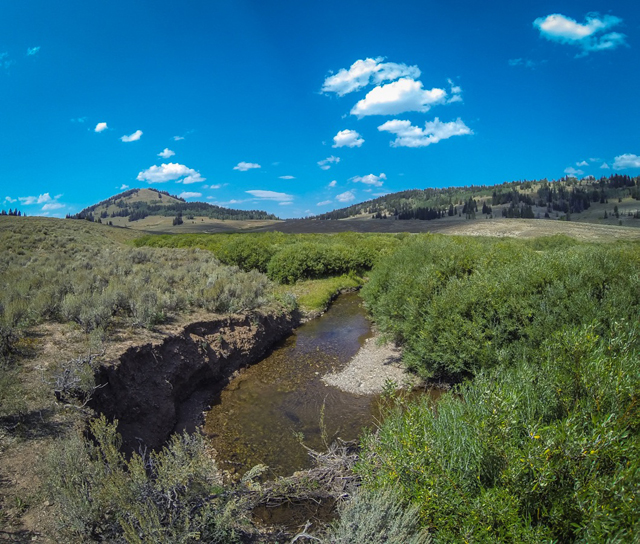 Most importantly to us anglers, it is also the home to three of the Wyoming subspecies of cutthroat trout: the Colorado in La Barge Creek, the Bonneville in the Smith’s Fork, and the Snake River Fine Spotted in the Greys River. Modest trickles of water from the top of the divide streams off into different drainages that form different watersheds in different directions eventually connecting to the Pacific Ocean via of the Columbia River, the Gulf of California via the Colorado River, and the Great Basin, which uniquely does not connect to any ocean or sea. 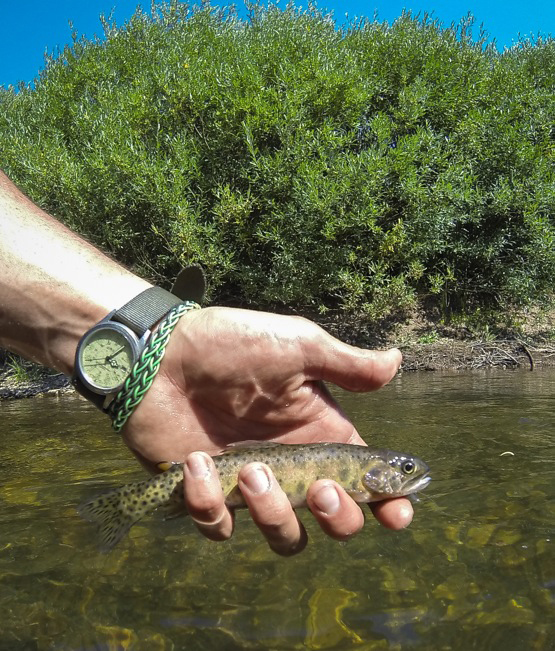 This Colorado cutthroat was number three in the author’s quest to complete the Cutt Slam.
Photo by Mike Dawkins

I quickly headed to La Barge Creek to find the Colorado cutthroat. La Barge Creek is one of those picture-perfect mountain meadow streams that flows through small willow groupings and vast tracts of alpine wildflowers. It is one of those places you could honestly spend an entire summer fishing a two weight and some dry flies to every nook and cranny and not see another angler for most of the time. I crossed a small bridge and decided to park the truck and take a look at the water. I crept up to the bridge and found three cutthroats sipping small caddisflies in a pool directly upstream. The sight quickly brought a smile to my face; however, they were rapidly displaced and spooked by the sound of a large black Labrador retriever hitting the water for a swim. We headed up the creek and found another group of fish feeding next to a log jam tucked tight in the willows. I selected a size 14 Para-Wulff Adams, and my first Colorado Cutthroat was brought to hand, photographed, and released back to its native watershed. The time was 3:04 pm.

Tui and I headed back to the truck, grabbed a sandwich from the cooler and started to head back over the pass to the Smith’s Fork and Bonneville cutthroat drainage. I looked at my watch and realized I might not have to drive home in the dark; I could actually complete this Cutthroat Slam on that day. Well, Mr. Bonneville Cutthroat did not think so. The Smith’s Fork was different than La Barge Creek. It drained off the western and southwestern sides of the massive Wyoming range through the deep pine and spruce forests. I could hear ruffed grouse drumming in the dark timber to attract their mates and declare their territory and sampled the huckleberries and serviceberries that frequented every part of the trail and road. 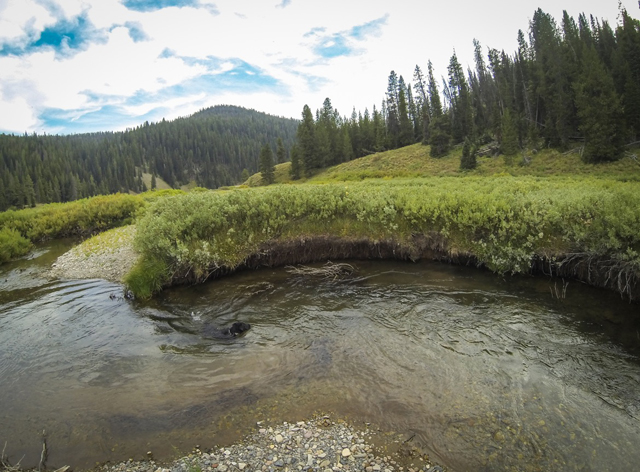 The Smiths Fork did not give up its prize easily.
Photo by Mike Dawkins

The Smiths Fork was chock-full of some of the most suffocating willows I have ever experienced—the type where you can’t see around the corner and just hope and pray that a moose or bear is not waiting to greet you with open arms. You make a lot of noise and talk out loud, but does that really do anything besides make you feel a little bit better? Each twig breaking and snapping caused a quick neck twist around to investigate my potential last moments to escape. Let’s just say I was ready to accomplish my goal and get out of there. Sure, it was a perfect place to fish with a group of buddies, maybe even come and camp out for the weekend, but I had made the decision to fish solo today.

I found an area close to a campground, which I normally would not investigate due to increased fishing pressure, and decided to give it a try. I began working a small custom tied Chubby Chernobyl through the rapid-like pocket water to no avail. I journeyed downstream for about a mile and found the honey hole! I could taste a completed Cutt Slam. It was a nice deep pool complete with willow overhang and perfect water speed; however the exit water of the pool was very fast and shallow. 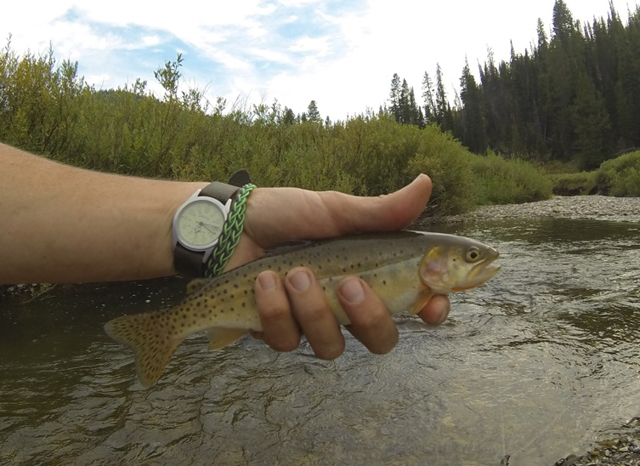 I cast my bug into the riffle above the pool and let it slowly work its way into the calmer water next to the willow branches. A dark shape moved at the bottom of the pool and quickly inhaled my dry fly. “That’s it, we got him!” I shouted to Tui. I quickly grabbed for my net but then realized I had left it in the truck. “Crap,” as well as some other four letters words came out of my mouth as the larger-than-average Bonneville exited the pool and subsequently broke off and skittered downstream. I threw my rod toward the bank as I lifted my hands into the air to let out a large vocal scream of defeat and disapproval. My chance was lost, Tui and I found nothing as we bounced from spot to spot. The water was low, as we neared the end of summer, and the fish were few and far between. We fished dries, we fished streamers, we fished dry-droppers and double dries and even a couple small nymph set-ups. Nada! “I am going to have to call the office and switch shifts with someone for work tomorrow,” I thought to myself as the daylight began to diminish in the deep timber and willows as Tui and I walked back to the truck empty handed, again!

I remembered a portion of the Smith’s Fork I had fished earlier in the day near an outfitter camp. The outfitter had hobbled his horses, and they were walking around the pasture near his canvas wall tent village. “Maybe this area will be a little safer as it gets darker,” I said to Tui, who was ready for dinner, as well as for his owner to bring a fish to hand! We skirted down to the river by an old bridge pilling and walked around the bend. I was prospecting with a small dry and finally saw some fish rise in the pool above me. Tui and I performed a full stealth-mode creep up to the pool, cast my fly, and connected! The fish was brought to hand, photographed and released back to its home. The time was 6:20 pm, a little over 3 hours after I had landed my first Colorado cutthroat.

The certificate for completing the slam is pretty darned nice.
Banner via cuttslam.com

To be honest, I couldn’t think of words to express my sense of excitement. I truly don’t remember being that excited about catching a fish in a very long time. This one was special because it completed the slam! Tui jumped in the truck, and I drove out on the same trail that those excited early settlers used to reach the West for the first time in their lives.

Weeks later, I picked up my certificate of completion from the local framer up the road and quickly hung the piece on the wall next to my wood-burning stove. My woodstove was radiating heat as the first snow of the fall fell outside, and consequently, Tui was curled up right next to it soaking up the warmth. I was quickly whisked back to my day on Tri-Basin divide and thankful I was inside my nice warm home instead of living a life on the Oregon Trail. As for the cutthroats, they were there before the settlers, pioneers, and Native Americans and with current management efforts, hopefully will be there much after I leave this world. So remember, the next time you catch a cutthroat trout, it was most likely not put there by someone; it was born there and has had the resilience to live there since the last ice age. Not many fish can say that, not many at all.

If you are interested in completing the Wyoming Cutt Slam, visit the Wyoming Fish and Game Cutthroat Slam Website for all the details.

2 thoughts on “Classic Fish Story: Wyoming is for (Cutthroat) Lovers”