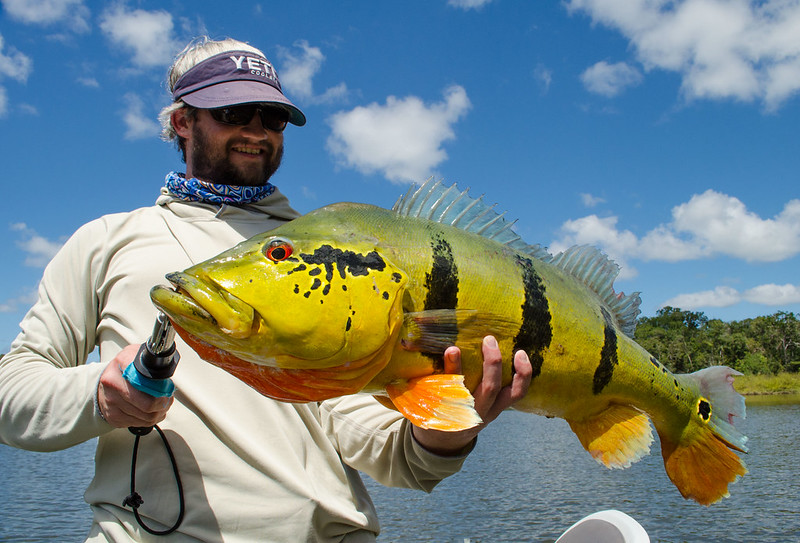 My hands are tired and eternally crimped in the rod-grip position. My stomach and chest are riddled with small bruises in perfect proportion to the fly rod fighting butt. My luggage contains shredded fly lines, reels that received more of a workout than they ever dreamed of while sitting on the shelves, rods that were doubled over and contorted in shapes they were not designed to ever see, and a dozen flies that are torn and beaten up by razor sharp teeth. These are the after effects of a trip to Agua Boa Amazon Lodge, deep within the Amazon jungle.

The Rio Agua Boa is, by Amazonian standards, a small feeder river that empties into the much larger Rio Branco, which in turn joins the River Negro. The Rio Negro joins the Rio Solimoes at Manaus to form The Amazon proper. 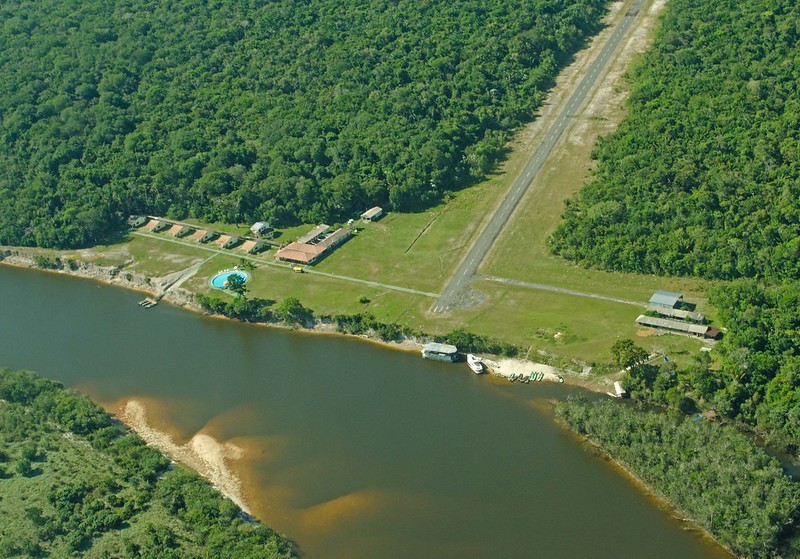 Agua Boa Amazon Lodge sits on the banks of the river in pristine wilderness.

Located almost 200 miles north of Manaus, Brazil, the Agua Boa river region is almost entirely uninhabited. The lodge is situated in one of the most unspoiled natural environments in the world, and its surroundings have an Ecotourism Reserve Status. The area’s remoteness and prime fly-fishing water conditions reduce and cut off access from the popular mother ship boats that cruise the Rio Negro and Rio Branco. The Agua Boa River is as pristine as it was the day it was created.

The amazon ecosystem is a true “survival of the fittest” community. Fish have lots of teeth, they swim fast, they travel and feed in packs for protection and they destroy everything in their path. This correlates to explosive peacock bass eats and takes that are borderline frightening. I often found myself yelling things such as “Whoa! Did you just see that!” “Ouch!” and–the most common—”Holy S**t!” more times than I can remember. These fish pull hard and don’t give up, ever. They know it is an opportunity for some other fish species to target them as easy pickings. They can and will beat you up and you have to fight back. They will test your gear, your physical stamina, your state of mind; however, it’s all about tough love. 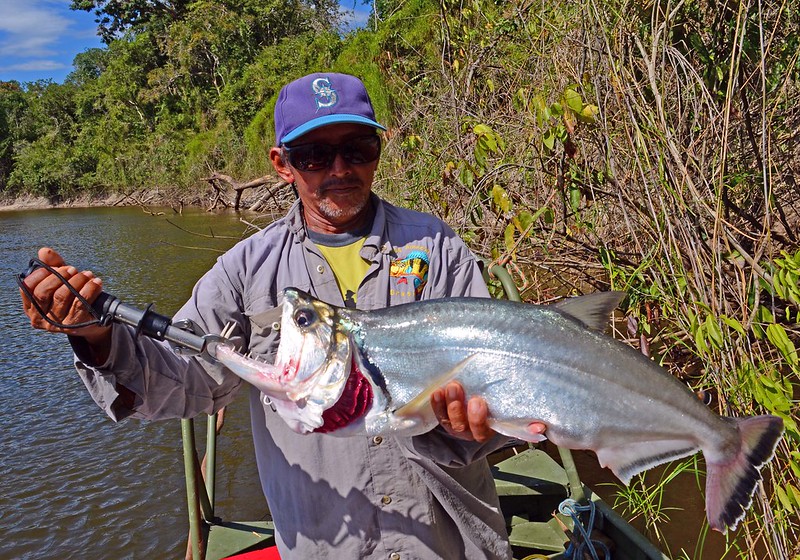 It’s survival of the fittest in the Amazon, and some fish are armed with serious teeth.

For the fly angler, sight-casting to these fish in the crystal clear water and sand beaches of the Aqua Boa River is a match made in heaven, a dream come true, and something that every angler should experience, as there is nothing like it in the world. No doubt about it, the Agua Boa River was created specifically for fly anglers. The fish that inhabit the river eat with such reckless abandon. Whether you target them on foot from one of the river’s sandbars, floating down the river, or sneaking in a side lagoon, you will encounter the infamous Amazon peacock bass, and you better be ready!

“Cast at eleven,” whispers my guide, Samuel, from the polling platform of the 20-foot john boat. We have just entered a backwater lagoon off the main river after boating over a dozen “butterfly” peacock bass in the 1- to 4-pound range, as well as a bonus Arowana. “Peacock casa,” he says. I launch a cast to a mound of sand with a large black hole in the middle. “Let sink, then strip, then hold on.” I let my 3/0 baitfish pattern sink for a couple seconds and then start my aggressive retrieve back to the boat directly across the hole. Within seconds, all hell breaks loose. I try to power the large hook into the fish’s mouth, line goes screaming off the deck, water is splashing everywhere, and it sounds like someone threw a couple bowling balls into the water from an airplane above. 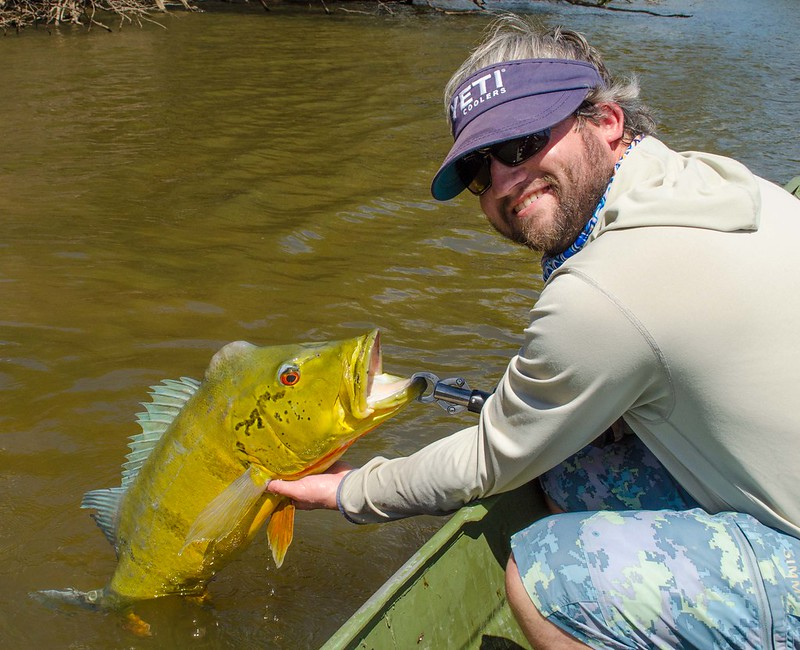 Peacocks strikes are savage, and the ensuing fight is a tug of war.

My reel now screaming and begging for mercy, wrestling the peacock bass is like fighting a linebacker. No finesse or backing-consuming runs, just sheer brut power and strength. If you show a moment of weakness, they will take advantage of you by running under a logjam or some other obstacle. “Dezanove,” Samuel barks in Portuguese! My Portuguese lacking, I reply “how big?” Samuel replies, “Nineteen pounds.” My 40-pound test fluorocarbon is marred from the fish’s abrasive mouth, my is fly mangled and missing half of its flash, my hands are shaking, my browis covered in sweat, but my face is all smile.

This place isn’t just about the fish. Throughout the week, we cast to cruising peacocks while the elusive gray-and-pink freshwater dolphins of the Amazon frolicked nearby. We ate lunch and enjoyed a midday siesta in hammocks hanging from the trees in the jungle next to a group of the enormous and very vocal Amazon River otters. We spooked blue and yellow macaws while on early morning journeys up and downriver. We watched the elusive tapir silently come down the river bank and grab a drink while on watch for caimans and jaguars. I finally sat my fly rod down when I saw spider monkeys jump from tree to tree looking for nuts, berries, and any other snacks. “Rex” the monster Caiman that calls the boat dock area home, was always happy to greet us every morning and evening. The Amazon rainforest lined the river banks and enticed you to explore her unique flora and fauna as you sight-cast to peacock bass. To say there is an abundance of wildlife in the Agua Boa region is an understatement. 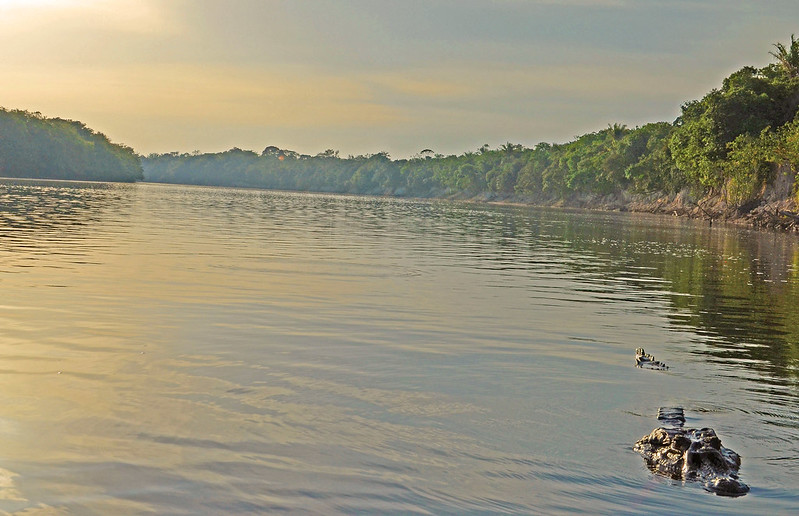 There’s more than fishing to enjoy on such a trip, as jungle wildlife is all around.

My last day was spent bushwhacking into a remote lagoon with a guide named Irmao. My boat partner for the day had hooked and landed some fish earlier, and we had noticed over the week that peacocks are very curious by nature. When one is hooked, many follow their buddy, or a solo goliath waits underneath with hopes of an easy meal. I stood ready, popper in hand, for the assault when the first fish was hooked. Irmao gestured to cast between two low-hanging trees. My boat partner hooked up, and my popper went flying. Glug, glug, glug, boom! My popper was inhaled by a small, 2-pound butterfly. Ka-boom again! I looked back at Irmao, “Peacock muito grande!” he exclaimed. A large peacock had inhaled the small peacock and my popper was lodged in the side of the big peacock’s mouth. I knew it couldn’t last, recalling my experiences as a young boy with largemouth bass eating bream on my cane pole, but it all came to fruition when the monster peacock was weighed on the Boga Grip. “One. . .five,” said Irmao.

I had seen the raw Amazon power that could be produced in about ten seconds, something I had never experienced in any of my angling travels. While I am the first to admit I was lucky to be at the right place at the right time when that fish ate my popper, the motive of the destructive monster goes unmatched.