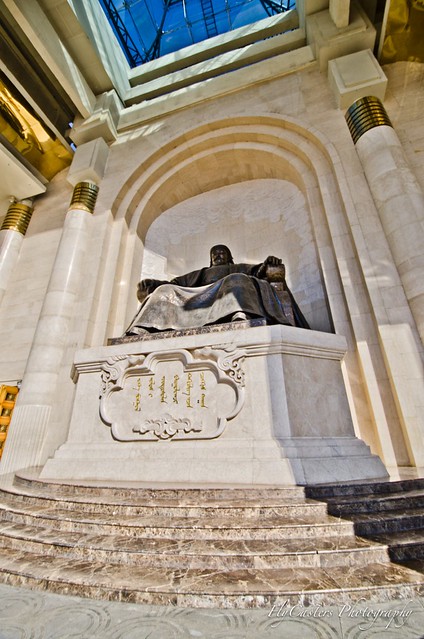 It took maybe all of one second to answer the question, “Do you want to go to Mongolia?” Ever since I ﬁrst learned about taimen, a trip to Asia was at the top of my bucket list. Should one be presented a question such as this, one is wise to rearrange all other plans.

For the last several years, WorldCast Anglers—the ﬂy-ﬁshing outﬁtter whom I guide for in western Wyoming and eastern Idaho—has hosted a ﬁshing trip for taimen and two species of native trout: the amur and lenok. WorldCast sourced this expedition (organized by Nomadic Journeys and guided by Mongolia River Outﬁtters) and takes six clients along with two WCA hosts (of which I was one this year) each October, when the taimen ﬁshing is at its prime. Mongolia River Outﬁtters now has four ClackaCraft drift boats, providing anglers the optimal platform from which to cover river, as each day brings new water on the safari-style journey, which lasts six days and covers nearly one hundred miles. This particular stretch of water is only ﬁshed three times each year; thus, ﬁshing pressure is virtually non-existent. My experience included multiple opportunities at taimen well over 25 inches every day, and the two biggest ﬁsh landed were 39 inches and 41 inches. 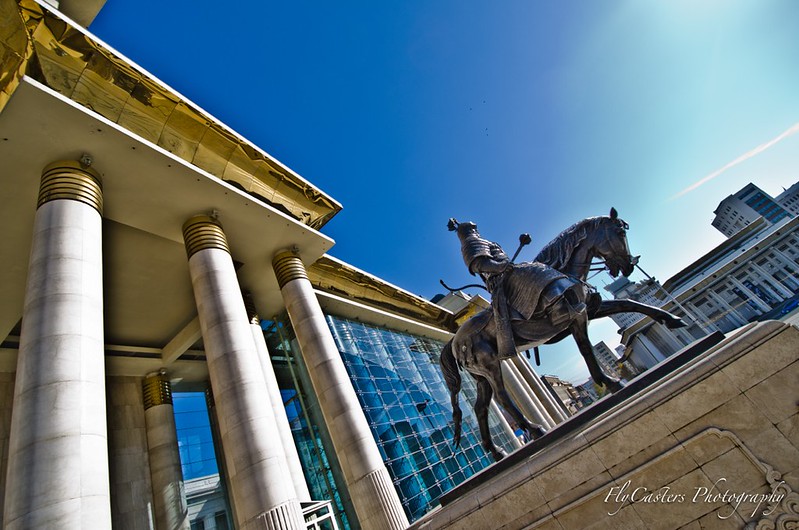 Arriving in Mongolia early allowed for some time spent walking around Ulaan Baatar; here the city square and Parliament House. About half of the Mongolian population resides in UB, yielding a very sparse density beyond the city limits in a country about the size of Alaska. 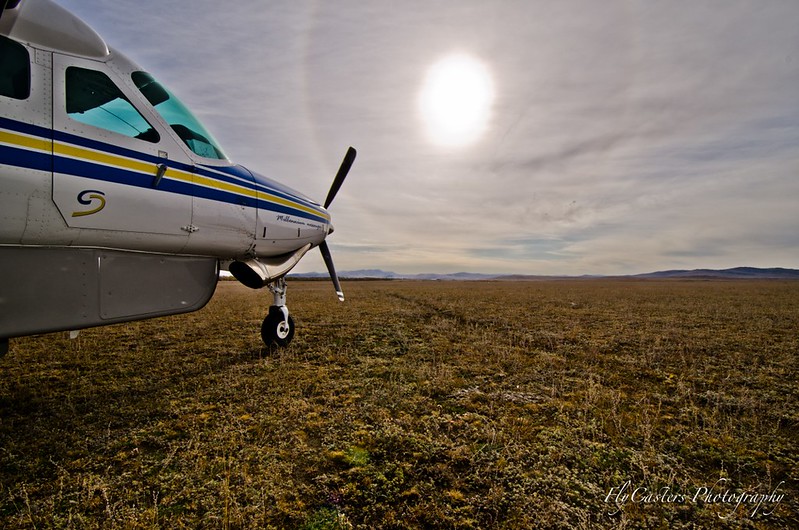 This Cessna seats nine passengers and brought us to the backcountry from UB in roughly an hour and forty-ﬁve minutes. It beats the caravan ride alternative that takes about eighteen hours “if things go right,” a disclaimer that followed any description of rural travel by truck. 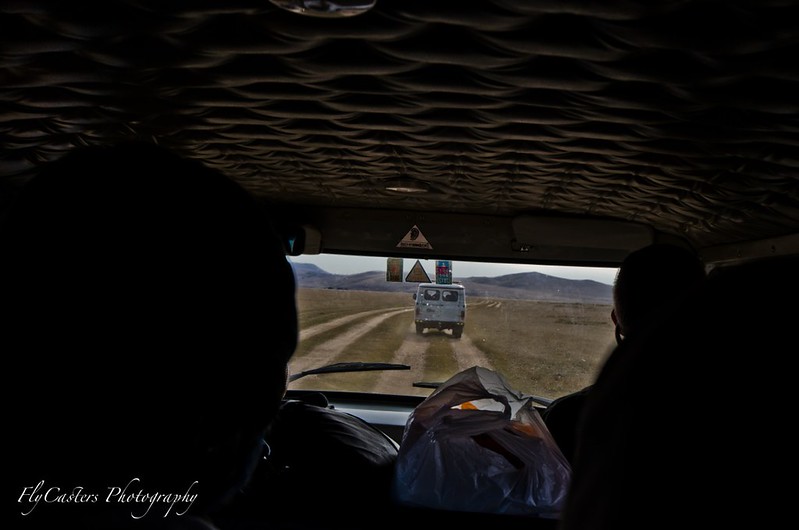 A short van ride to the river along the highways of Mongolia. Though the few short stretches of road we traversed on the trip were relatively smooth, it was understood that the padded-roof interior could be appreciated by passengers traveling the long road to UB. 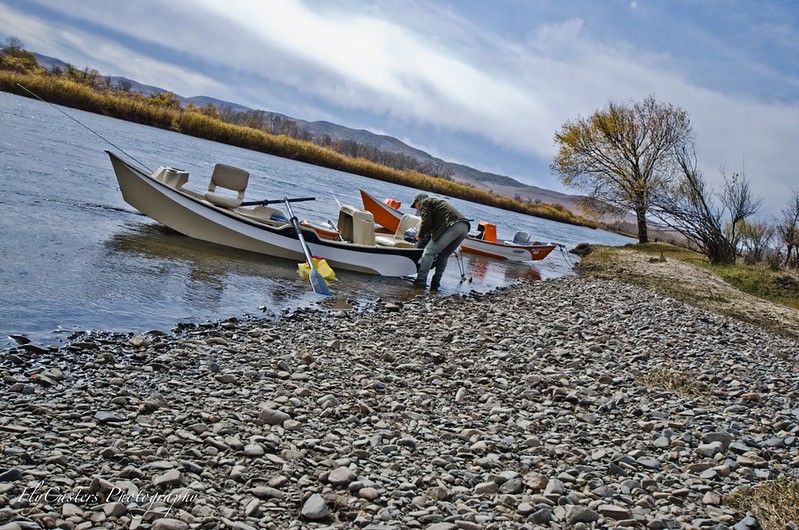 ClackCraft sent these drift boats and their trailers via shipping container from the States to UB, from where they were driven to the river. They replaced inﬂatable rafts that were used previously. 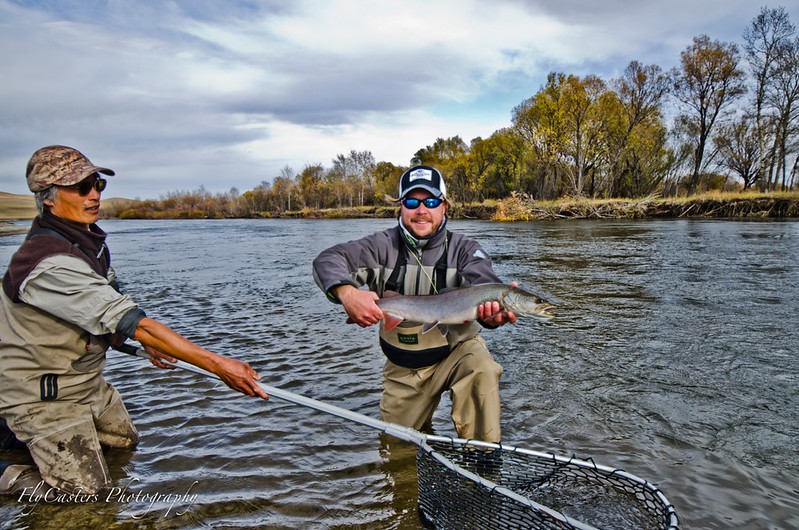 On day one of ﬁshing, this was my first taimen. It was 28 inches long and ate a white Chinese Goat streamer (pictured below). That’s MRO Head Guide Peter Fong on the left. 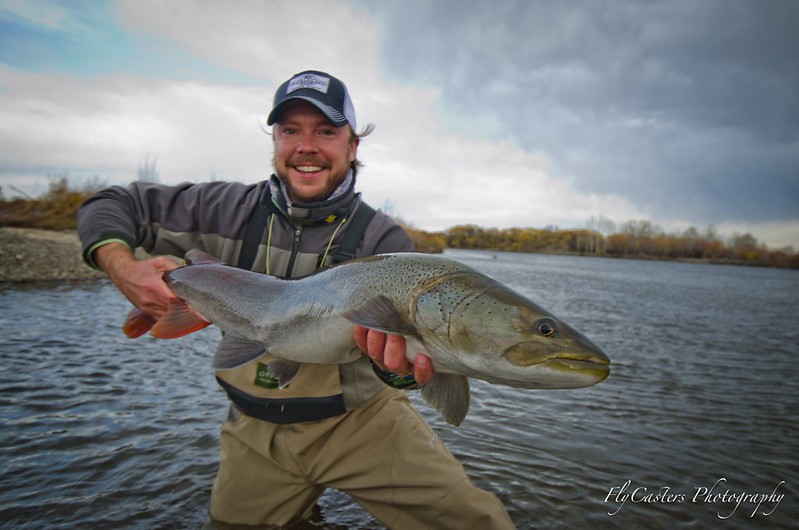 This fish was landed just a little while later on day one. Perhaps a function of their innate aggressiveness, their place at the top of the foodchain, and the absence of angling pressure, taimen are known to offer anglers a second and sometimes third chance at hooking up. After ﬁghting this 39-inch ﬁsh for about thirty seconds on the ﬁrst eat, things came unbuttoned. Unlike most trout, which would head for cover after feeling the sting of a hook, this guy came boiling up out of the water to whack the ﬂy again two casts later. 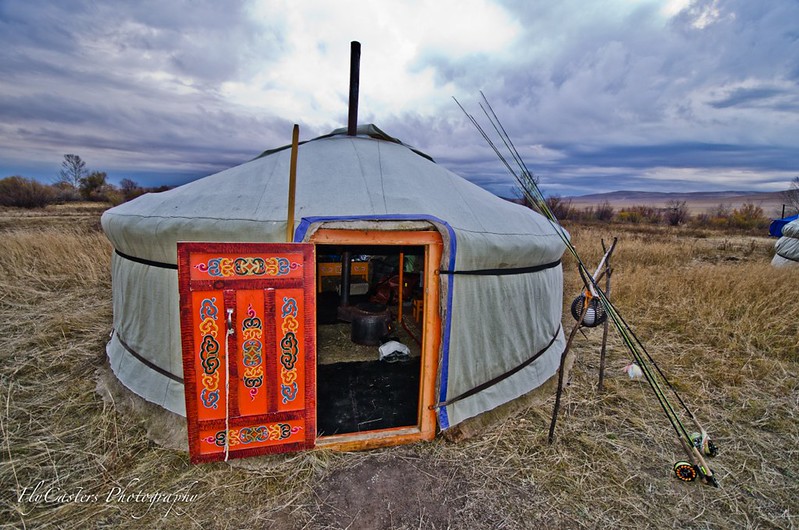 Although many would call this a yurt, the Mongolians call this dwelling a ger, and it was quite cozy. Floating to a new camp each day, we would arrive with the luggage already deposited and a ﬁre burning in the stove. A cot, a pillow, and ample blankets made for sound sleeping, and each morning around 6 a.m., a camp staffer would enter to stoke the ﬁre. It was quite amazing how quickly the ger would heat up. In addition to the four client gers (one for each pair of anglers), every camp had a dining ger, where breakfast and dinner were served, three toilet tents, and one shower tent containing its own stove for heating water and providing a comfortable bathing environment. 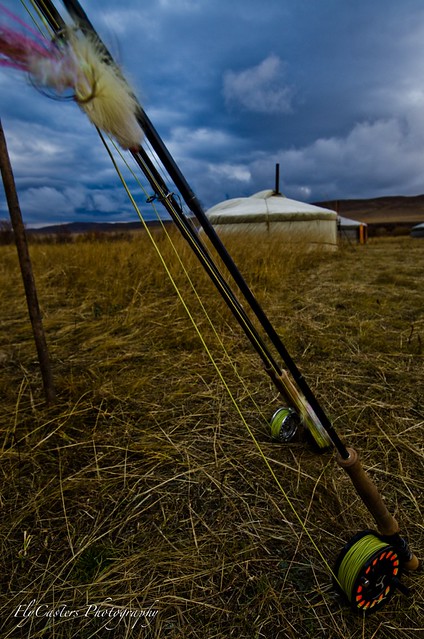 The Chinese Goat streamer is a version of an original pattern, the Chilean Goat. Among the guide staff are two native Mongolians, three Chileans, and one American. As a result, there exists a wealth of local and global ﬁshing knowledge on tactics and tying. 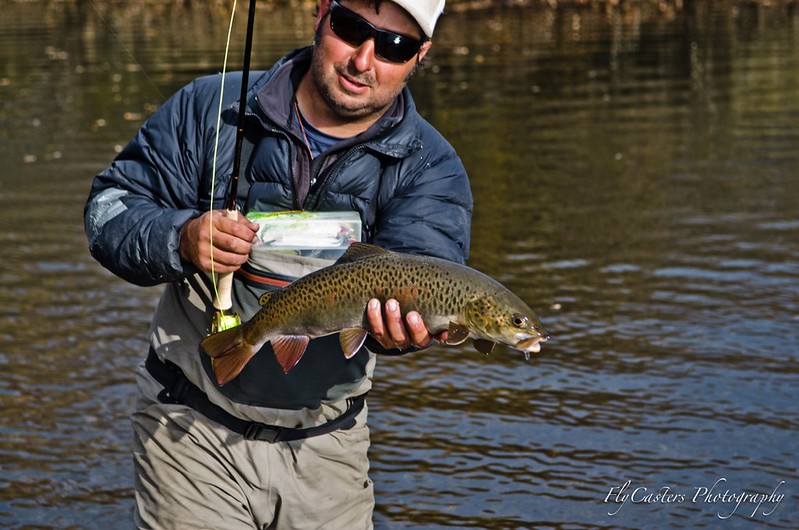 Guide Jaime Castillo holds a lenok trout, one of two native trout species other than taimen. This ﬁsh came from one of several episodes of sight-casting to pods of trout. 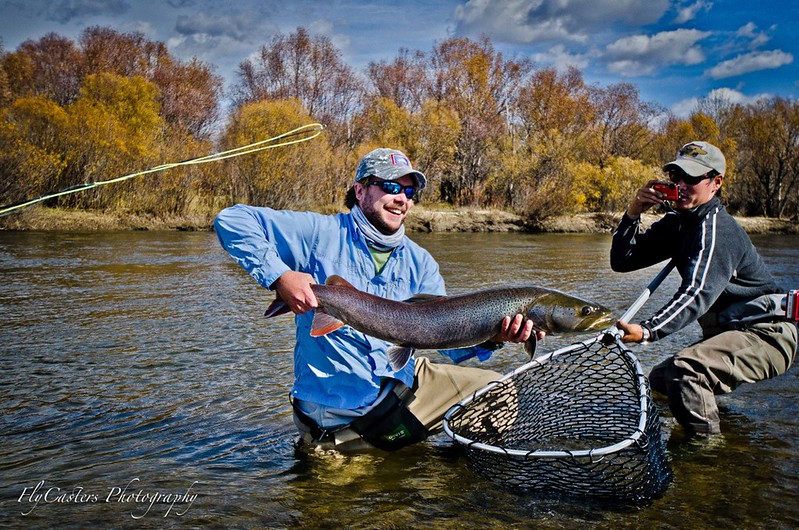 This was the biggest ﬁsh of the trip, a 41-inch taimen with an 18-inch girth. I was using an Orvis Helios 8 weight and a Mirage IV. Cranking the drag system all the way was a ﬁrst for me on a freshwater species. 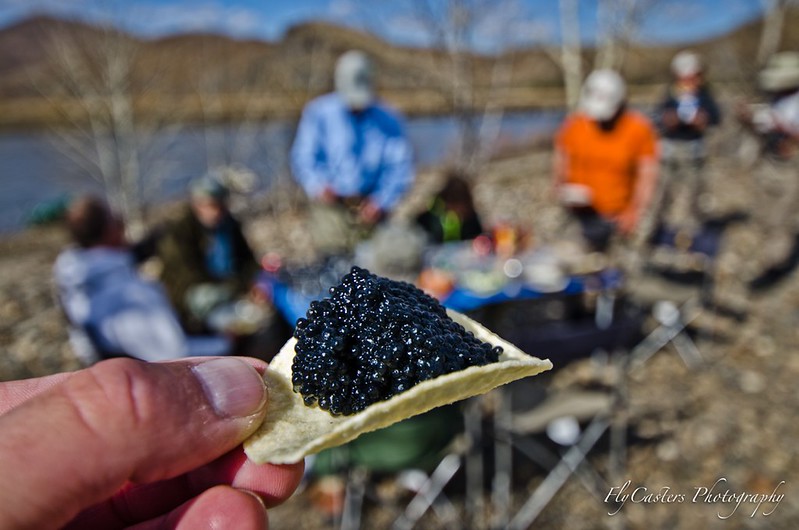 Here is a typical lunch scene. That day’s main course was curry chicken that was being prepared riverside by the crew of the lunch raft in a dutch oven over a ﬁre. Accompanying the main course caviar, pictured here a top a Mr. Potato chip. 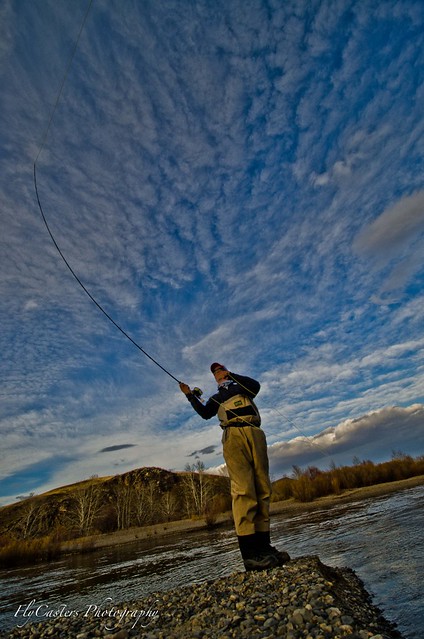 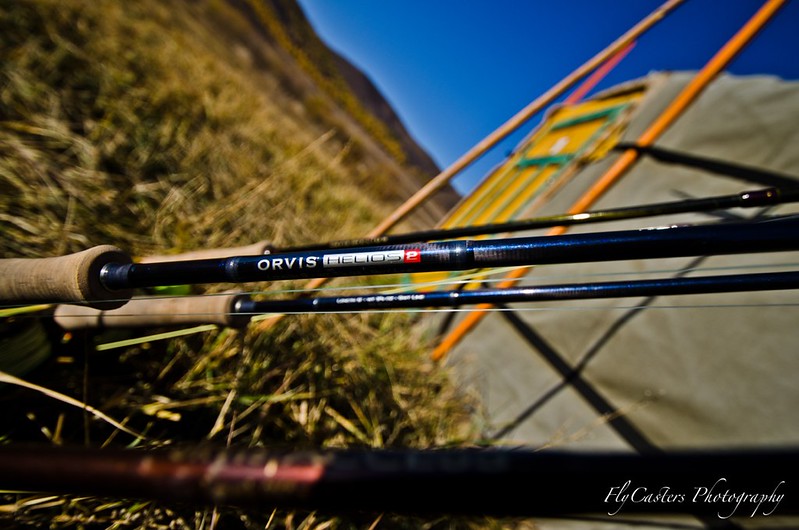 As in steelhead angling, casting aplenty is part and parcel of taimen ﬁshing. Depending upon water level, clarity, and ﬁsh appetite, an angler might ﬁnd him or herself skating mice patterns on top or stripping large tube-type streamers. Steve Hemkens at Orvis was most kind in making available to us several Helios and Helios 2 rods and Mirage reels. Hucking meat with a stick like those was dreamy. 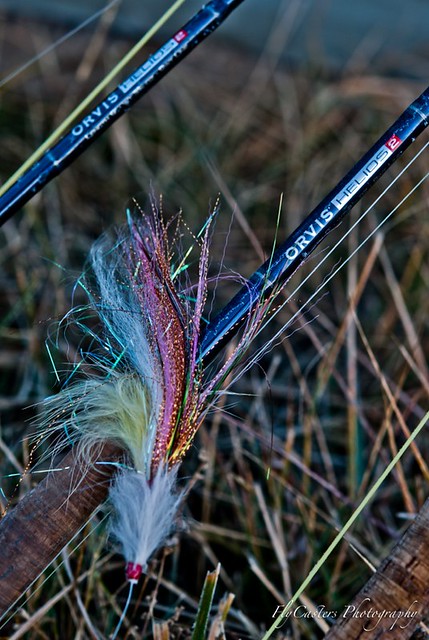 Here’s another shot of the Chinese Goat. This year’s trip saw higher water levels than usual, and those conditions led me to ﬁsh a tandem rig with two tube ﬂies in tandem with a single 3/0 hook on a sinking-tip line. 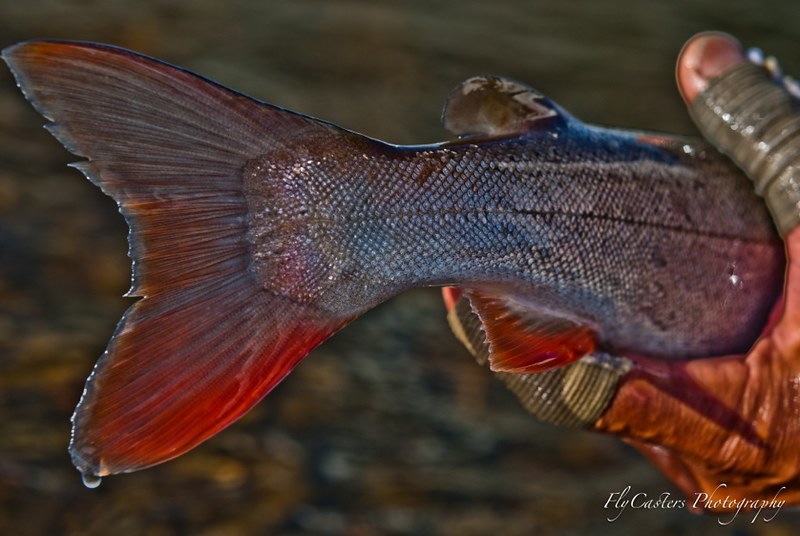 The red tail of a taimen. Another unique part of the experience was tagging the taimen. So little is recorded about their growth rates, migration patterns, and the health of the river system. A small specimen clipped from the adipose ﬁn along with a photo of the ﬁsh’s proﬁle and measurements were taken and sent to be studied by a professor at the University of Nevada in Reno. 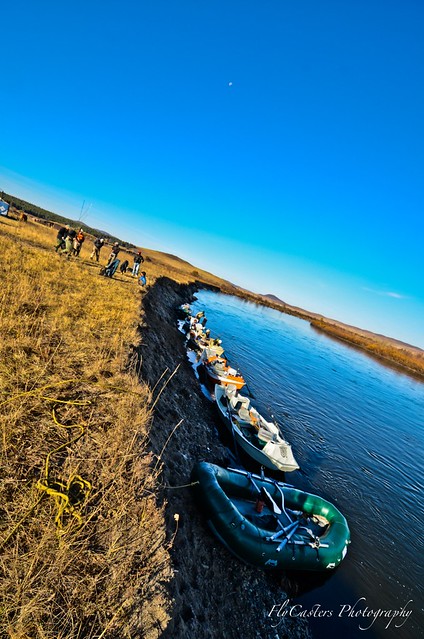 This is a typical scene in the morning at any of the riverside camps. Fishing would begin about 8:30 a.m., with the last boat arriving at camp around 6:00 p.m. or so. Each day provided an immense amount of angling, and as with all ﬁshing trips, it is wise to practice in advance on casting and hauling. 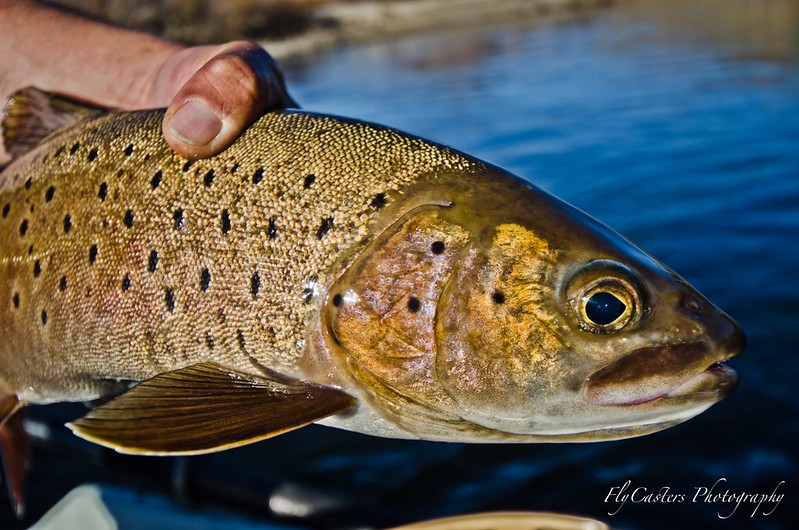 This Amur trout just over 22 inches and beefy. Taimen are obviously the main draw, but we had some spectacular trout ﬁshing on the trip and caught numerous ﬁsh like this one that would be considered a “day-maker” back on the home waters of the South Fork. In all, I caught four new species: amur, lenok, taimen, and a Mongolian pike. 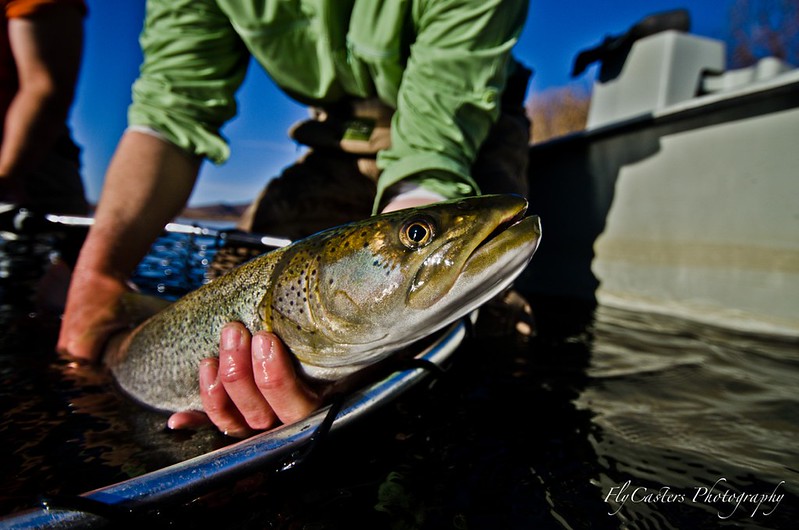 By the end of the six full days of ﬁshing, we were within 20 miles of the Russian border, a fact that only enhanced the allure of the trip to this child of the Cold War.

Gordon Hight guides fly fishermen for WorldCast Anglers. Check out his photography at his personal website. Click the “Mongolia” tab for more pictures from this trip.

6 thoughts on “Classic Photo Essay: The Fly-Fishing Journey of a Lifetime in Mongolia”