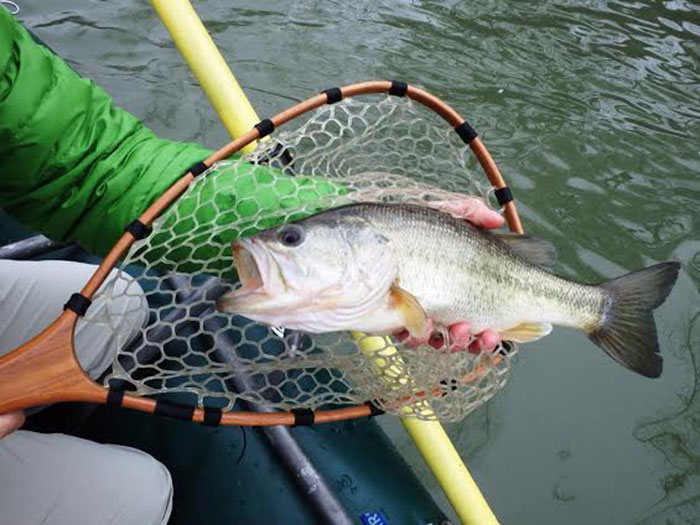 I recently read a “how-to” article about bass fishing on the fly and watched an older video that put tournament gear fisherman alongside a fly guy in the Sacramento Delta. Both were very informative. I thought I’d write up something of my own, offering my take on what I’ve learned in my years of fly-fishing for bass and, more recently, guiding for them with All Water Guides in Austin, Texas. We seem to have a unique thing going on here: We target bass in a manner that’s more like saltwater fishing than freshwater, and we row our goofy jet boats as if they were drift boats on a Western river. Casting to river bass puts an element of challenge on the table that requires a well-rounded angler. Here are my thoughts…a few of them at least.

1: This is work!
As Brian “Lucky” Porter said in the movie “Zero 2 Hero” about fishing for muskies, “You’re not gently presenting a number fourteen Parachute Adams to a rising trout; you’re doing work.” Now, we’re not catching muskies, but we do work! I prefer 8-weights to 6-weights and can realistically expect to hit the bank every five feet for hours. You need to put the fly on the bank with S.W.A.T.-team-like precision then start fishing it. Once that fly hits the water, you need to retrieve it in a “come and get me Mr. Bass manner.” Bass in our rivers are aggressive, and they want to hunt. Sometimes the fish want a fast retrieve or sometimes slow. Your first step is to find a cadence that you can reproduce. It’s easier to deviate from a constant: if what your doing isn’t working, then you can slow it down or speed it up.

When I have anglers on my boat who understand this, we do well. But it is work, and it’s intense. If you’ve been dead-drifting terrestrials with 4-weights and haven’t spent much time with bigger gear, ask for a little help. After all, it’s just a fly rod and feathers. So eat your Wheaties and be ready to do a lot of casting with big gear. 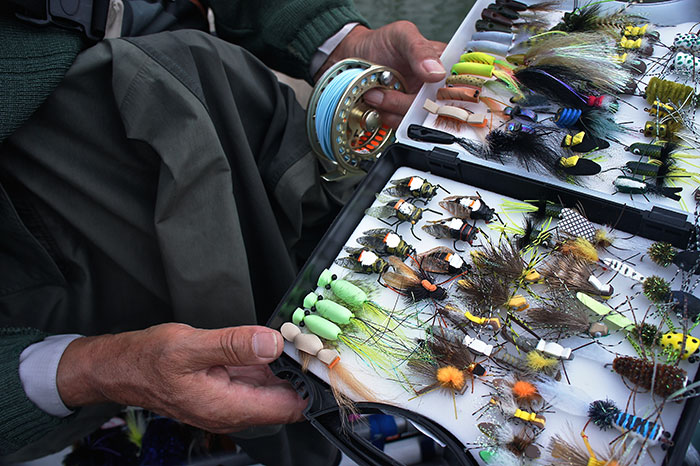 Most people enjoy catching bass on top, but they’re not always feeding on the surface.

2: We’re fly fishing, not casting. Fish every cast.
Just today I had this conversation with a client. He hadn’t fished in a year and was rusty. His casts were less than perfect but probably better than most. Again and again, he’d pick up a perfectly fishable cast that he didn’t think was good enough. There is no such thing as a bad cast on my boat. If that fly hits the water you’re fishing, so make the most of it. “Fish that cast” has become my mantra (I have many) when I’m on the oars. What you may think is a horrible cast probably was–I don’t mind saying that I’m a terrible caster, by the way—but the fly is in the water and that’s where the fish are. So leave it and start fishing. I think a problem with folks sometimes (and again, me included) is we spend way too much time re-casting a perfectly good and fishable presentation because of what we thought of our cast.

3: They ain’t always on the surface.
I’m a weirdo, and no one who knows me will argue that point. I just like streamer fishing for bass; not sure why, but I do. Don’t get me wrong: topwater fishing is a blast, but I would much rather throw big shad patterns on a sinking line any day. To each their own, though.

I am in the business of putting clients on fish and when the frogs are singing and the conditions call for it, we throw poppers…poppers…poppers. The other 99% of the time, you gotta do what the river tells you. Get your head out of the boat and watch what’s happening around you. If you’re not seeing action on the surface, go to where the fish are.

I’ve had folks in my boat mention “those Bass Masters” and their “glitter boats with all those rods” in a typical snobby fly-fisherman manner. What they don’t get is that all those rods allow the bass anglers to, in a systematic manner, dissect the water column. What they also don’t get is those dudes catch fish, and we could learn a lot from them. When I go fishing, I’ve got at least two rigged rods, for surface and subsurface fishing. I think two could easily be four, though: surface, sinking-tip, intermediate, and full on get-down-and-dirty depth finders. If having multiple rods doesn’t fit the budget, purchase some spools for your reel. If the fish don’t come to you, go get them. 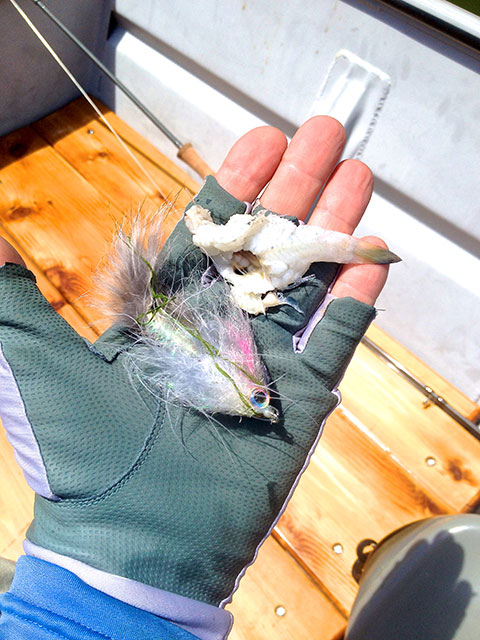 The hunk of meat on top came out of a bass’s mouth, which explains the large streamer.

4. Use your confidence fly.
One of my recent clients stated, while fishing, “Winston, I just don’t have any confidence in this fly.” I could have hugged him! It was a good fly, one of my go-to flies that always produces. But he didn’t like it and that was it; out came the pliers and the fly box. Fish with what you’re confident in. In the subconscious of your deep inner fishing-ness, it matters.

This could be a touchy subject if you’ve hired a guide to fish water that he knows like the back of his hand. I get that and have been there. He’s the guide, and who are we to tell him what we want to fish? I don’t think the fish care, so neither should the guide. At the end of the day, it’s your time on the water. If you’re not excited about what you’re throwing, the fishing will suffer. In a professional manner, I handed the client my fly box, he picked a fly, and on it went. We still got skunked, but his whole essence changed by fishing a fly he had confidence in. That, I feel, is as important as fly selection. Listen to your guide but also interact with your guide.

5. Be systematic, be vocal.
I try to always verbalize my ideas with whoever is rowing while I’m fishing, and vice versa. This gets the boat working like a team. With clients, I try to take a second as the river transitions to clue them in on what lies ahead and open them up to whatever marvelous thoughts that may or may not be running through my head at the time. I know it’s just fishing, but having everyone on the same page really helps. It truly can be a team sport, and systematically approaching a section of water and picking it apart as a team is as simple as coming up with a game plan and sticking to it.

Fish the water in a manner that will produce the most chances of hooking up. Don’t cast over spots 1, 2 and 3 for that fish that “just has to be” hiding in spot 4. Be patient. You never know what bruiser you could be casting over, and longer casts have a lower hook-set success rate. Be systematic, be deliberate and be calculating like the WBD (Weapon of Bass Destruction) you are. 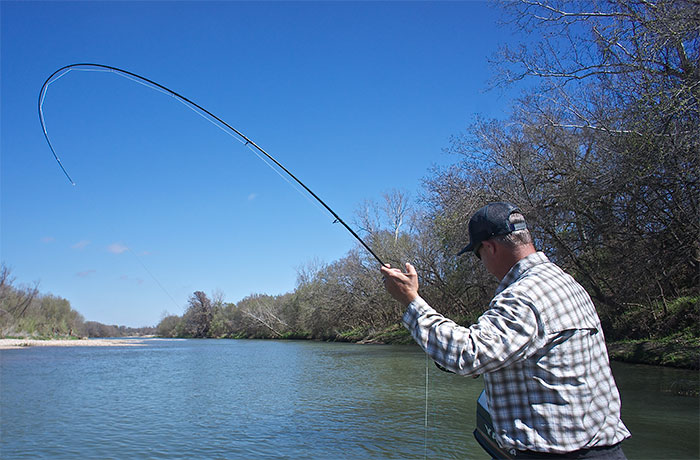 Applying side pressure during a fight is an effective tactic to make the fish work harder.

6. Take a break.
Sometimes you get in that groove: Your loops are tight, that fly is kissing the bank, and you haven’t hit a tree in an hour. . . .All is right with the world. Sometimes it’s like this all day; sometimes you lose that magic, though. When this happens to me, it’s time to get on the oars. I’ve never been able to “will” my way back into the magic. Instead, my cast falls apart, and I get frustrated, and the fishing starts to suck.

Take a break. Sit down. Tell some more lies about the Yellowstone or throw ice cubes at your buddy if you’re out with one. Just stop and break that cycle. Rest for a minute or 30 and get back after it. We’ve got all the time in the world to fish with focus and intensity and none to waste on being frustrated that our cast has all of a sudden gone to hell. Put the rod down; your muscles will know what to do when you pick it back up. Our brains get in the way sometimes.

7. No trout sets, and keep your rod tip in the water.
Always keep your rod tip on the water and pointing in the direction of the fly. This keeps the fly where it needs to be and slack line to a minimum. Whether it’s a popper or streamer, it’s all about the initial grab and your strip set. Keep the rod out of the picture for now; it’s made to bend for casting purposes, definitely not for hook-setting. Use that line instead: Tip down, rod butt out in front of you, and strip like you mean it. The salt guys have been preaching this for a long time and so have we.

Once you’re tight, fight that fish in the normal manner. I’m not a huge fan of the rod up at a 45-degree angle all the time; I tend to keep my rod low, using lots of lateral pressure on the fish, which also helps when they jump Bass do jump, and it’s a predictable event. They are deep, then less deep, then lesser deep. Just like you would with a tarpon, bow to the king of fresh water or Mr. Bass will throw that fly right back at you when he goes maverick. Be aggressive landing the bass and don’t worry about the reel; if that fish needs to be on the reel he’ll put himself there.
As always take it or leave it, I had fun writing it. Get out there and get you some ditch pickles…

Winston Cundiff is a guide at All Water Guides, in Austin, Texas.