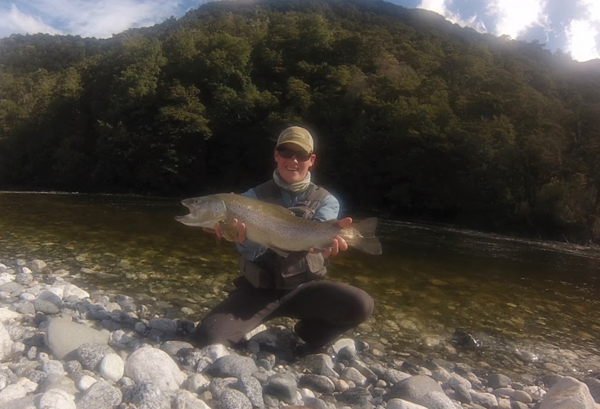 A brown trout of around 8 pounds on a dry fly is well worth a long hike in.
All photos by Alastair Peake

After another three day expedition into the heart of Fiordland backcountry, I feel bruised and battered yet utterly privileged to have experienced such a fly fishing adventure in paradise! The Clinton river drains into Lake Te Anau in a location so remote it’s only accessible by a one-hour ferry ride or float plane journey. The river meanders down from the glacial valley though dense rainforest and runs parallel to the infamous Milford Track, one of New Zealand’s most famous tramps. The river runs over greenstone rock and is a crystal clear river, hosting many rainbow and brown trout. Fishing this river can make you speechless at every turn of the river, and to spend several days camping and chasing those unparalleled Fiordland Trout just makes you feel alive and grateful that you are able to experience such a natural beauty. 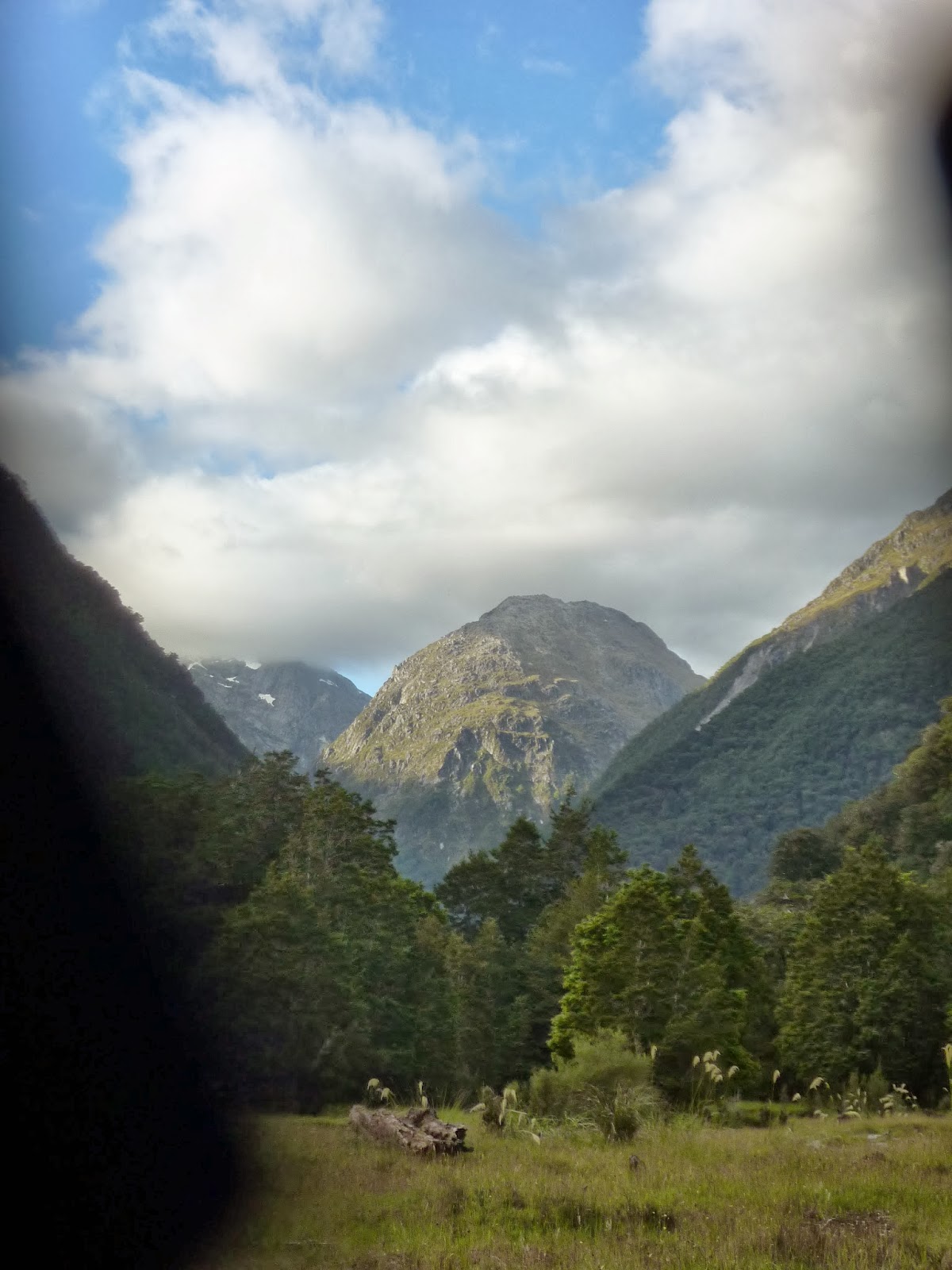 After docking at the mouth of the river, I began my six-mile hike up the Milford Track to my camping site, a small clearing a little way up the north branch—completely remote and among some spectacular fly water. I pitched my tent and had a cast in what I now refer to as my “house pool,” and duly landed a beautiful rainbow. These remote, wild fish always take me by surprise with the sheer energy they display when hooked and their absolutely perfect condition. I continued to hike up the South Arm, where I stopped at the occasional pool and sighted some fish. I managed to fool a couple, but my aim was to get to the upper West Branch. 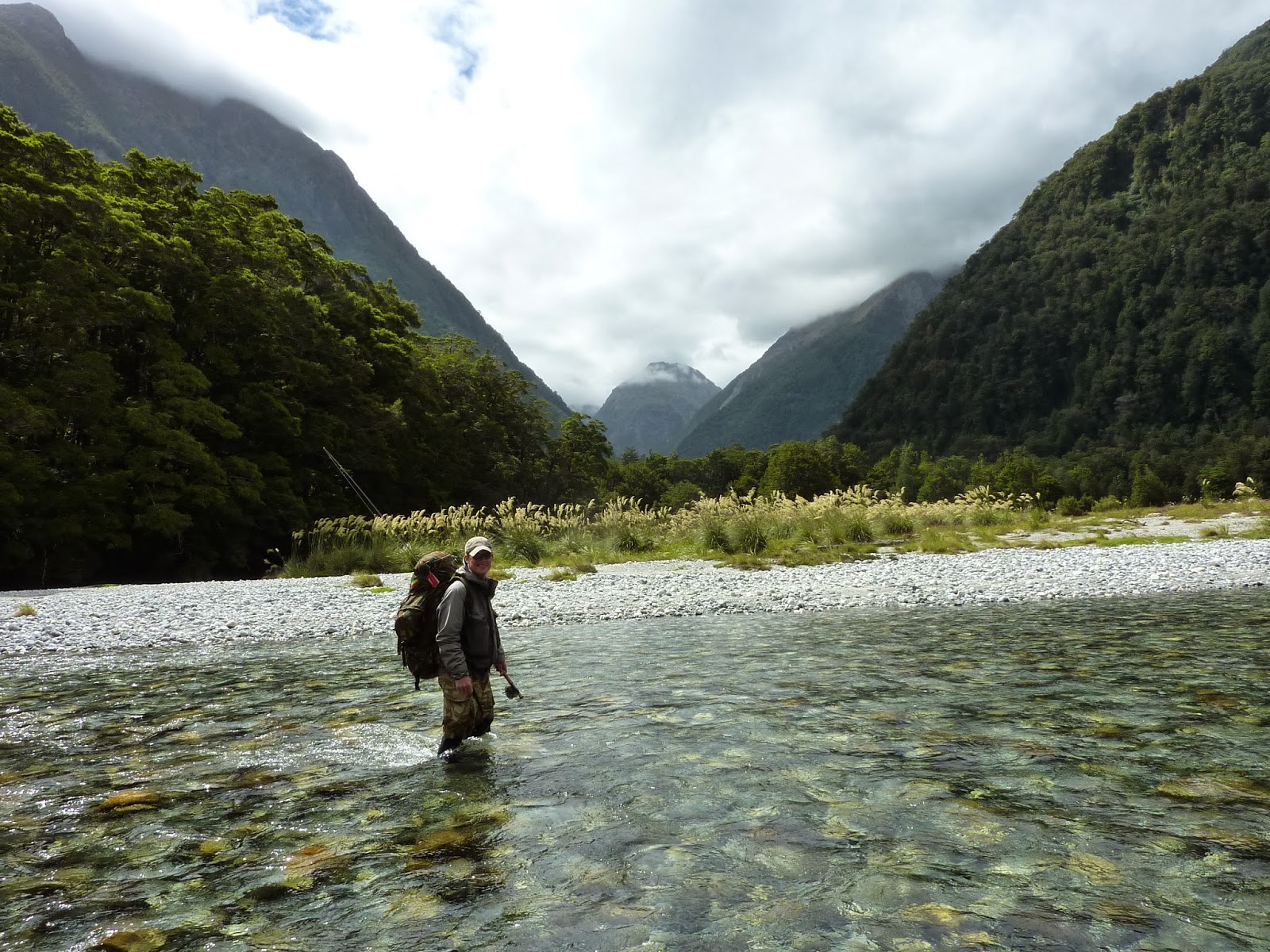 I arrived in early evening, and as I approached the much smaller river, words cannot describe the feeling I had as I bushwacked through the dense rainforest understory to stumble on the clearest stream I had ever seen, with snow-capped mountains towering above and the sun setting ahead in the steep valley. The amount of stunning trout up here is phenomenal, but they are very spooky due to the shallow, clear water. After re-rigging my leader to 15-feet, tapering down to 5-pound fluorocarbon, I proceed to fish upstream. Some of the fish spooked, but I was fortunate to land a few. Every fish was willing to come up for a carefully placed dry fly…. dry-fly magic! 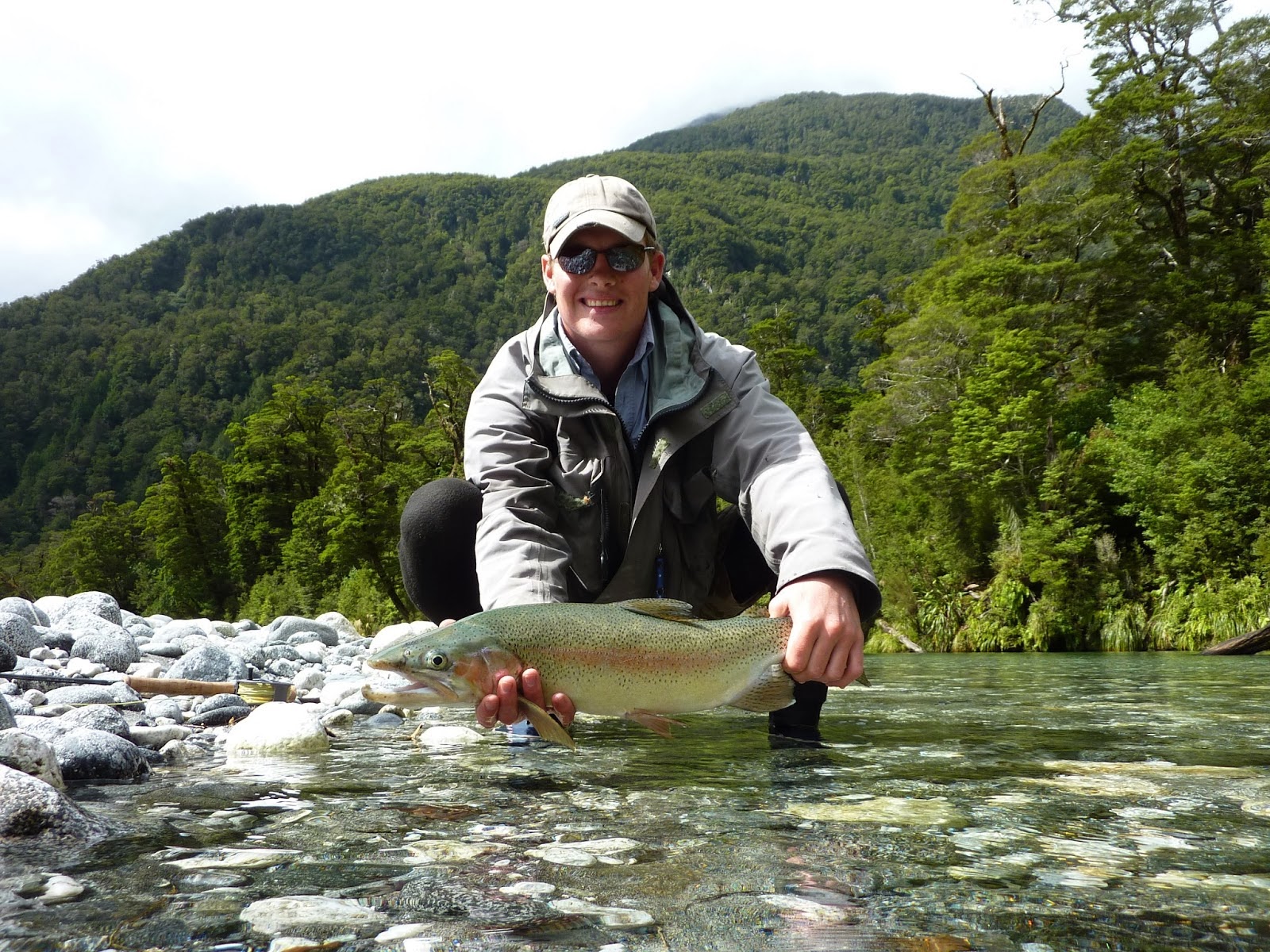 As the weather was forecast to turn bad, I ambled back to camp at around 10 p.m. —after about an hour’s hike, during which I briefly fished the odd pool. By 12:30, the heavens opened, and I sought shelter in my tent, which appeared completely minuscule amid the dramatic surroundings. After a good night’s sleep, during which it rained heavily, I woke to see that the river had risen by 5 feet in just 6 hours. I attempted to ford the river on the route where I would need to wade back with all my gear, but the current was too strong and my solution was to wait it out in the tent. It proceeded to rain until 1 p.m., and I took refuge in my fort reading Derek Grzelewski’s new book The Trout Bohemia, a great account of life the soul and trout fishing in New Zealand. 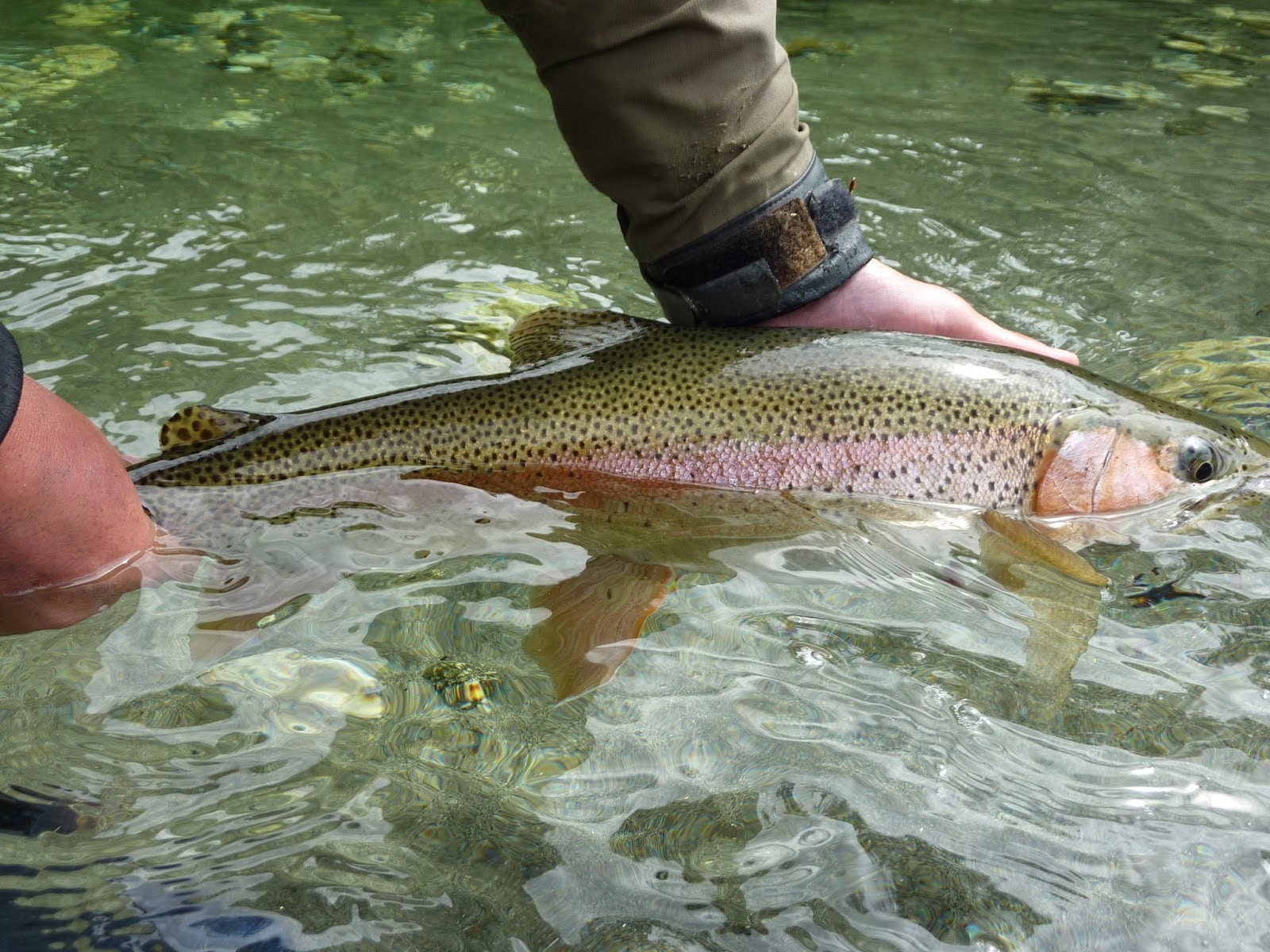 By 6 p.m., the river had dropped two feet and was falling, although slightly coloured and still rather big. I rigged up my 6-weight Helios 2 rod with a 7-weight line and some 10-pound fluoro and proceeded down to some pools that I thought may still offer a chance at hooking a fish. I cast the small fish imitation upstream and stripped it back through the current as fast as I could, so it traveled faster than the current. To my surprise, on my second cast I saw a very large fish rocket out of the depths and smash my fly. It dived straight back to the depths with my fly lodged firmly in the scissors of its jaw. After a ten-minute battle, of which mostly he was in control, I was able to land the trophy brown trout of around 8 pounds and safely release him. 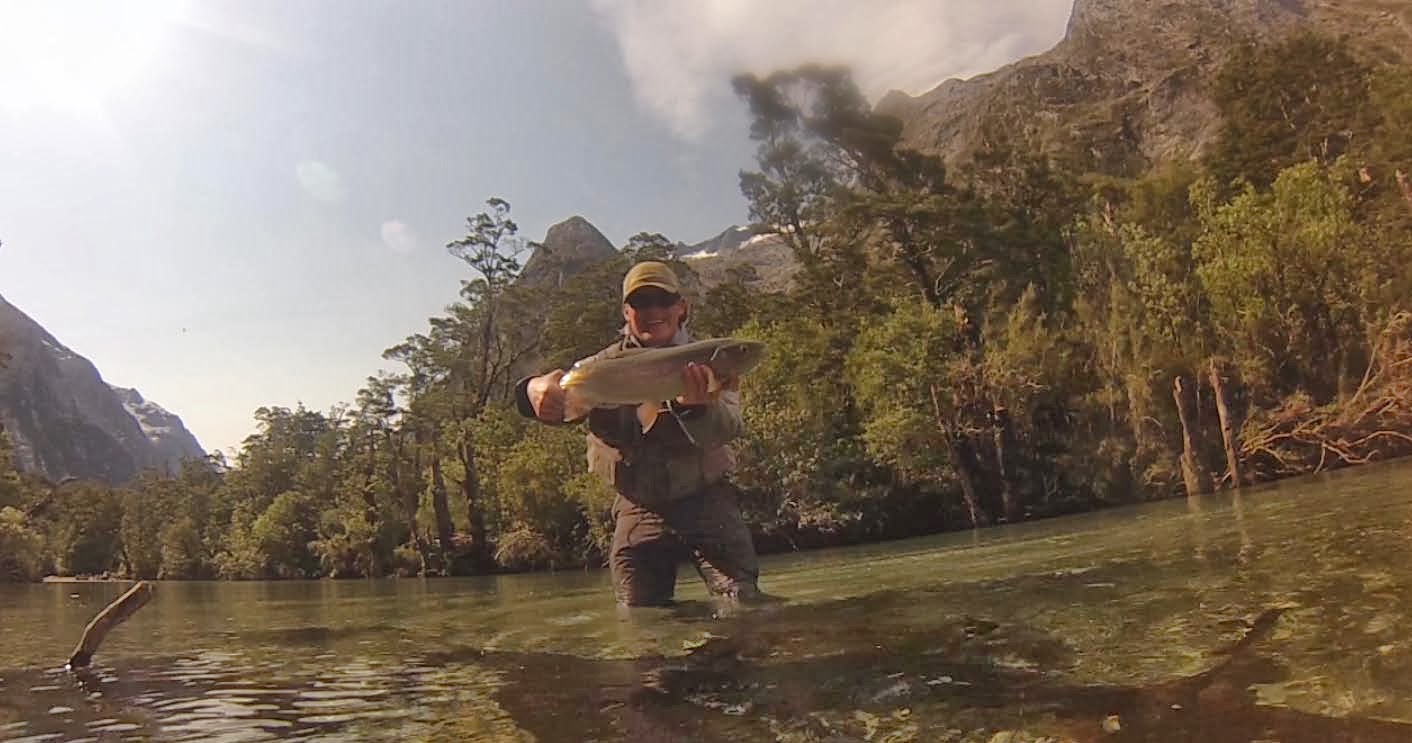 Now feeling completely alive and thrilled, I continued fishing for the day and caught four more beautiful trout, including another 8-pounder, and lost a few, as well. By 10 p.m., I decided that I didn’t want to venture too far from camp, as the river crossings were still pretty hairy, so I went back into camp and rested until the morning. 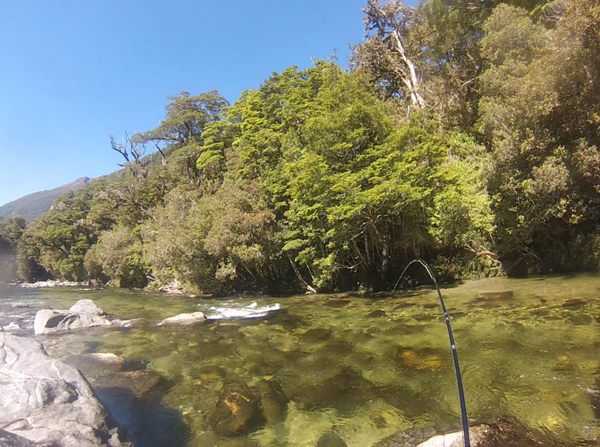 I awoke at 6 a.m., ventured outside to be met by a horde of sandflys that had been waiting patiently like zombies for their next feed, and I was once again stunned at the speed the river had dropped. Once again the river was low and clear, with that beautiful greeny blue tint that the greenstone gives the water. I packed up camp, making sure there was no evidence of my presence, and I hiked back toward the mouth of the river and my boat pick-up point. 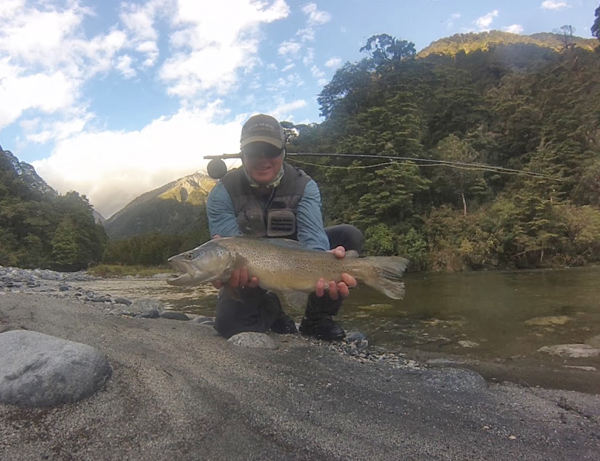 My plan was to meander down the river and fish along the way, exploring some pools and fish that I hadn’t fished before. I am totally glad I did, for the sun was beating down and the river was in perfect order. Some of the Milford trekkers were surprised to see me appearing back on the track or disappearing off the track through the undergrowth that looked totally impassable. But to a fly fisher who is aware of what is behind that thick vegetation, nothing is impassable, and I crawled on hands and knees to explore new pools and sections of the river. My efforts were rewarded with lots more dry fly sport.

Bruised and battered, but ecstatic and content with the outcome of the trip, I boarded the boat at 4:30 and ended my trip… until next time 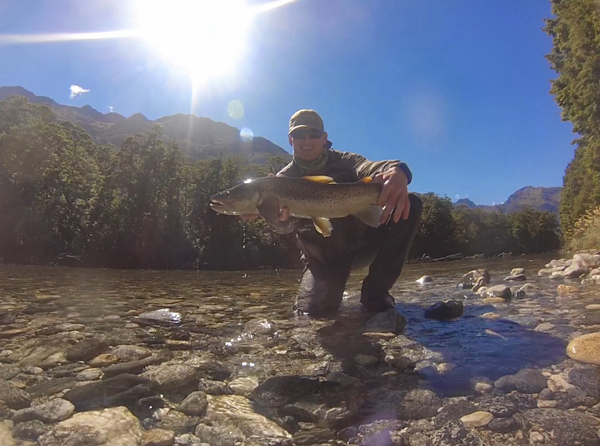