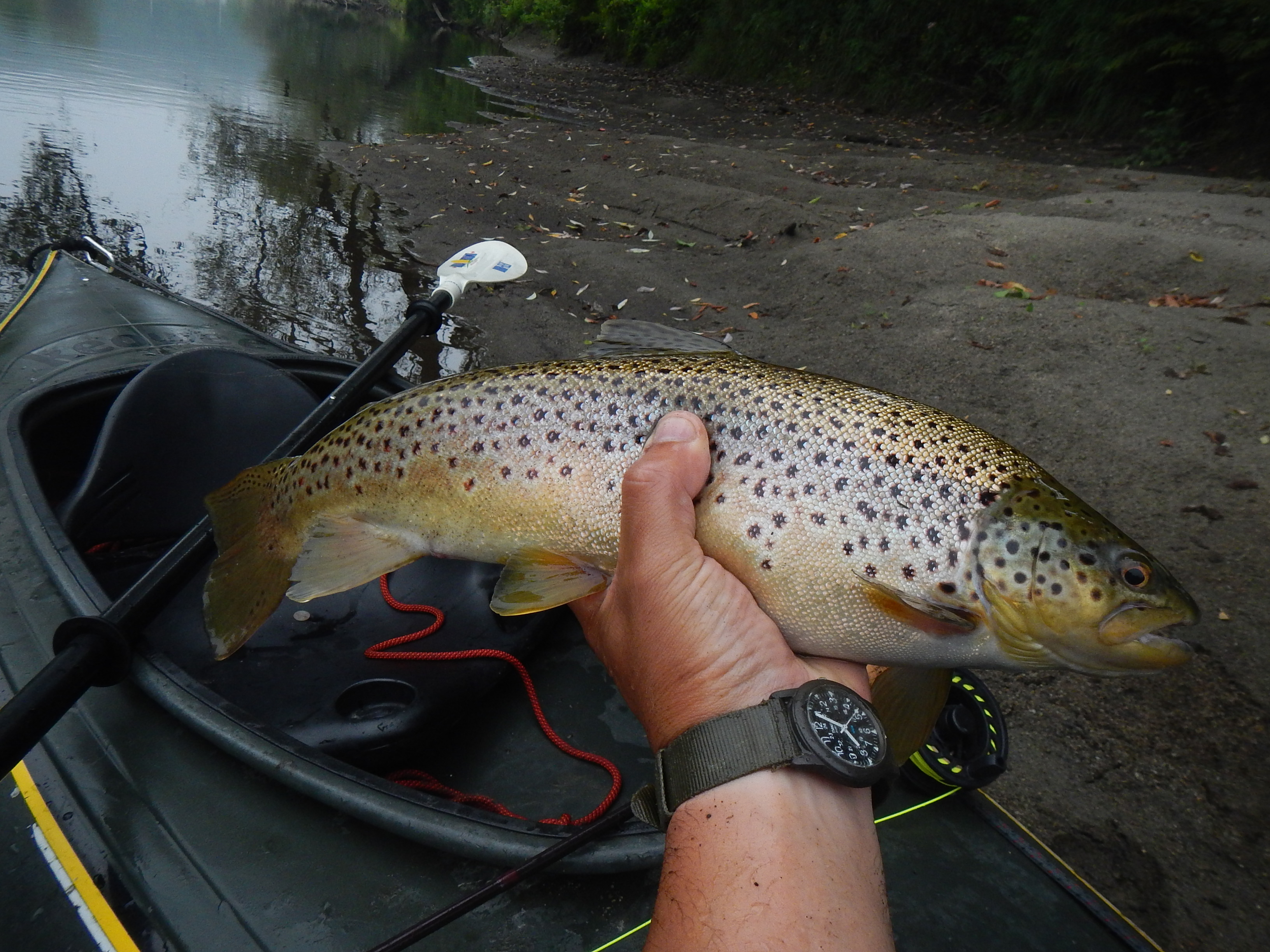 This 22-inch brown lived where you wouldn’t expect it: under a raft of trash in an urban river.
Photos by Matt Dickstein

Editor’s note: Donovan Borne’s story below reminded me of this great tale of a “secret spot” hiding in plain sight.

The summer before last, my family moved to an old New England mill town, and in doing so I gave up my beautiful freestone stream for a badly degraded, silted and channelized post-industrial river, a real step down in aesthetics. However, while the range of available fish on my former neighborhood waters was mostly 7- to 13-inch trout with occasional 16 inchers and real trophies around 18 inches, this new ugly water has average fish in the 12- to 16-inch range, with 18 inchers a daily possibility. And here and there, you’ll find an honest two-footer, comparable with the largest trout in any river in New England. There is a “trophy” stocked section right in the middle of town, where they put in around a thousand 13- to 16-inch fish each spring that have mostly been grilled up by the worm-and-beer guys before the Fourth of July. But the real treasures are on a couple of stretches separated from that water by hydro dams.

It’s weird fishing, with long reaches of pretty worthless habitat separating little pockets with good substrate, depth, shelter and shade that hold fish. There are lots of tires and train parts and rebar around, along with capsized shopping carts and nasty old mattresses, but some incredible fish live in and among the junk. The general environs look so unpromising that not many people try … and, seeing what’s in the water besides fish, not many keep and eat what they do catch, so the fishing is surprisingly good. I pretty much stumbled into the best of it; the guys in the auto shop had my old beater Toyota up on the lift one day in August, and finding myself with an hour to kill, I took my rod out to the lame-looking water behind the dealership. 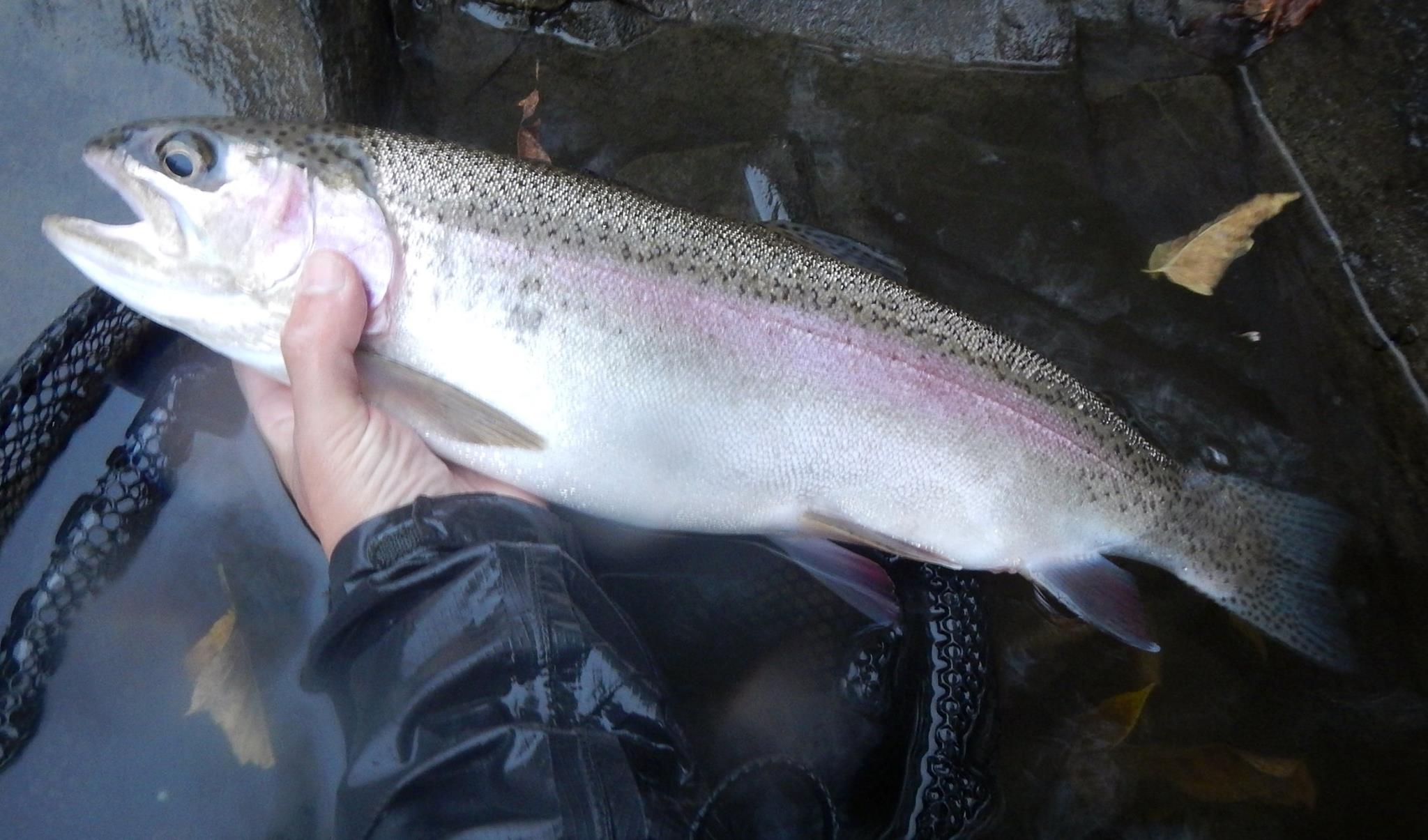 Because few folks realize the fish are there, they are free to grow to epic proportions.

I struck out until I located a log jam that spanned the whole width of the river, backing up a tremendous raft of milk jugs and Monster cans and leaves and scum and foam into a shade mat across a ledge hole that has to be at least 12 feet deep. The first fish that came for my fly was so fat I thought it was a carp at first, then a largemouth bass, before I realized it was a rainbow with the dimensions of a jumbo Costco pork loin. One just as fat but about four inches longer finned lazily past a few minutes after that. Inspired by these sightings, I borrowed my mother-in-law’s kayak and went for a little scouting paddle the next day—no rod, just looking—during an amazing hatch of flying ants that helped me quite a bit in finding where the fish were, since lots of them were hovering pretty high in the water column. The moment it really clicked for me was when I glided right over the top of the biggest brown trout I’ve ever seen at large in a public waterway: conservatively, I’d say it was 25 inches and maybe six pounds.

I went back out at dawn the next morning to try and catch it; I did not manage to do so, but I did land two browns, 22 and 17 inches respectively. In the ten weeks since then, I’ve made visual contact with that big one a few more times, but he’s hard to get a good drift on, and I haven’t yet enticed it to take. I did, however, land a lifetime-best 23-inch wild rainbow from a spot nearby (my “Day 26” entry for the “20 September Days” contest) right as the big rains were starting up on the afternoon of September 29. Like most of the others, it was hiding very much in plain sight.

Matt Dickstein lives in Anytown, New England, where he fishes the Nevermind River.

One thought on “Classic Story and Photos: Discovering an Epic Urban Fishery”