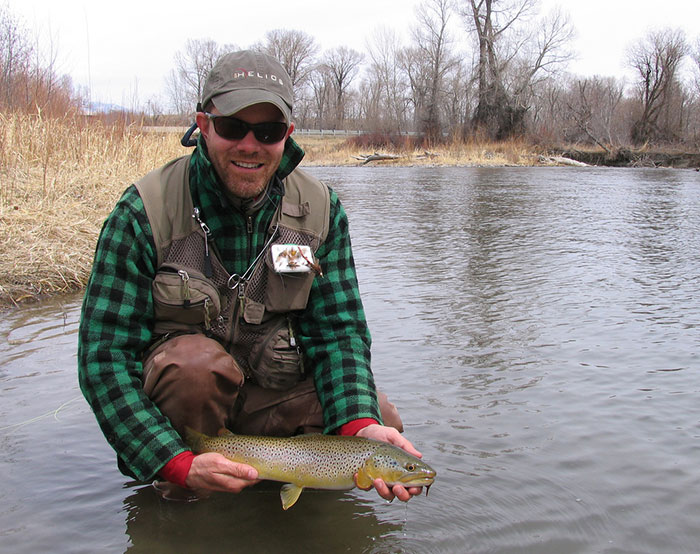 [Editor’s note: The question of whether or not to use river names in blog posts comes up a lot. It reminded me of this post from the early days of this blog. By the way, my friend Eric is now a well-regarded author of thrilling novels. Check out his latest book, The Names of Dead Girls.]

A few years ago, Eric Rickstad and I made plans to go to Montana in late April for the Orvis Western Guide Rendezvous. As soon as our travel plans were finalized, Eric started talking about a river I’d barely heard of. “We gotta hit the [REDACTED] River,” he said. “I’ve heard lots of whispering about some big browns there in spring and fall, but I’ve never had the chance to fish it.” When I mentioned that I hadn’t heard any such rumors, Eric just said, “Exactly,” and smiled knowingly. The possibility that there was an “undiscovered” river anywhere in Montana seemed far-fetched, but I figured it was worth humoring him.

Once we were on the ground in Bozeman, we started asking around to see if anyone else felt the same way about the [REDACTED]. “I gotta tell you, I sometimes have a hard time catching fish out of that river,” one guide told us. Another simply said, “I wouldn’t take clients there.” But whereas I heard these as refutations of the rumors, Eric saw things differently. “You notice that nobody is saying there are no fish there? Or that the fish are all small?” he argued. “Sounds to me like they’re trying to hide something.” I was starting to think he was delusional. 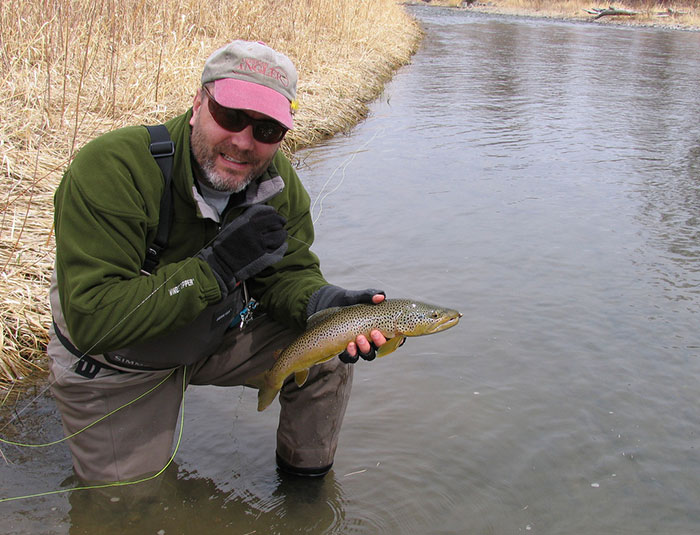 This is the trout that forced me to admit I’d been wrong. Dead wrong.
Photo by Eric Rickstad

The weather for our first three days of fishing—which we spent on some of the region’s famous waters—ranged from brutal (20 degrees and snowing) to simply unfortunate (bright sun and 30-knot winds), but we did pretty well. Blue-winged olives were hatching, and we caught a few really nice trout. So when our last day to fish rolled around and Eric said, “Let’s go to the [REDACTED],” I thought long and hard about blowing it off and doing some work in my hotel room instead. Why end our trip by getting skunked on a river we’d been warned about? But then I came to my senses: I was in Montana, for God’s sake. There was no sense in wasting a day by sitting inside.

On the way to the river, we stopped in at a fly shop to pick up some streamers. They guy behind the counter looked surprised when we told him where we were going. “You heard anything about the [REDACTED] recently?” he yelled to his coworker in the back room. A face appeared in the doorway, and the guy from the back scoped us out. “Nope,” he said, and went back to what he’d been doing. Eric looked at me, smiled, and nodded. I rolled my eyes. 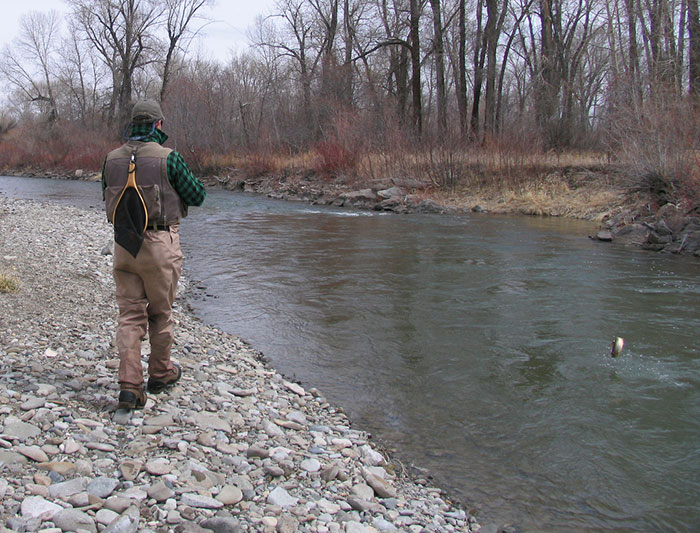 Even though the weather and the water were cold, the fish were powerful and feisty—
a few even taking to the air during the fight.
Photo by Phil Monahan

A late-model El Camino was parked beside the river when we pulled in. “See?” Eric said. “That’s a local, not a tourist. This is gonna be good.” Heavy cloud cover and slightly off-color water made for perfect streamer conditions, but I wasn’t expecting much success. We rigged up and decided to work upstream.

On my third cast, a fish hammered my fly as it swung at the end of the drift—it was a decent brown, perhaps 14 inches. “Okay,” I said to Eric. “There are some fish here.” Over the next three hours, we found fish in almost every pool. Most were in the 17- to 18-inch range, but a couple were beauties that went over 20. It was the best fishing of the entire trip, and it was hard for us to tear ourselves away when we had to leave to make it back for a big dinner. As we stowed the gear in the trunk, I told Eric I’d never doubt him again. He agreed that it would be a wise decision on my part. 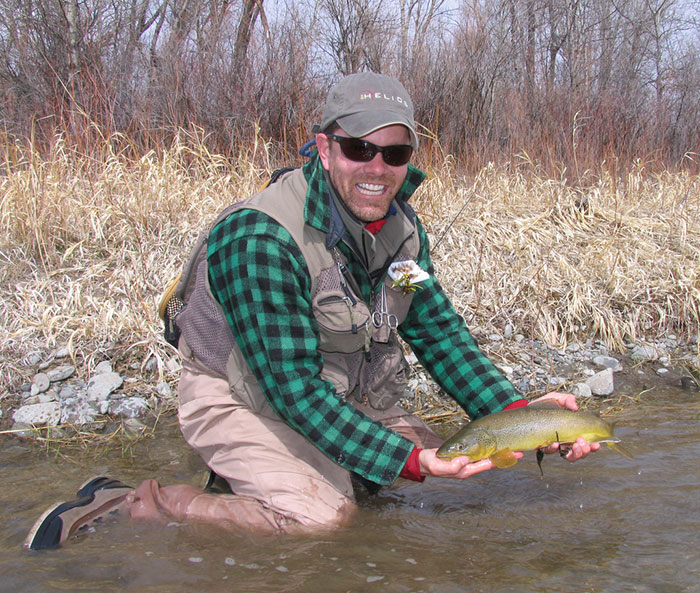 That’s the smile of a man who has proven himself right.
Photo by Phil Monahan

So the next time you ask about a river you’ve heard whisperings about, listen very closely to how people respond; they might be telling you more than they intend to. Read between the lines and pay attention to what they don’t say. You may find that the river that few people will recommend is the one you really want to fish.

And, no—I’m not divulging the name of the river. Eric would kill me.

3 thoughts on “Classic Story: Reading Between the Lines”