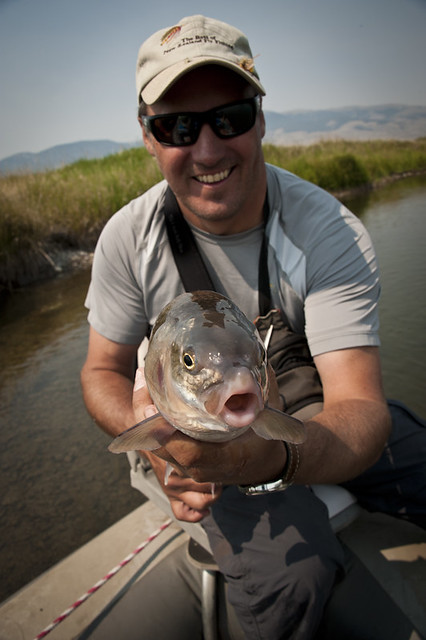 When you’re off the grid, a trophy whitey is a reason for a big smile.
All photos by Toby Swank

Maybe it’s just the fact that I’m getting older now, but fishing is becoming more and more about all the things that go into fishing than about actually fishing. I find myself less worried about fly selection, partially because I can no longer see anything smaller than a size 16, and looking more for the happy fish than the picky fish. Familiar waters feel more like home while I still hold hope for the promise of the unknown. So, every once in a while, I grab a box of big flies and head out for the unknown waters that lie beyond the reach of cell towers, shuttle drivers, and any sane fisherman wondering around Montana this time of year.

The 2012 jaunt was taken with a couple of friends last week and was spurned by the absolutely horrid fishing we had been having on the Yellowstone in late July. Normally this time of year, I’m all for working riffles with a skittering hopper just about anywhere East of Livingston on a day off, but not this year. On my rare midsummer day off the sticks, we headed away from here to that little stream over there to see if we could find some fish that were willing to eat whatever it was we decided to fish. That’s a much easier approach than trying to fish to trout with what you know they should eat! 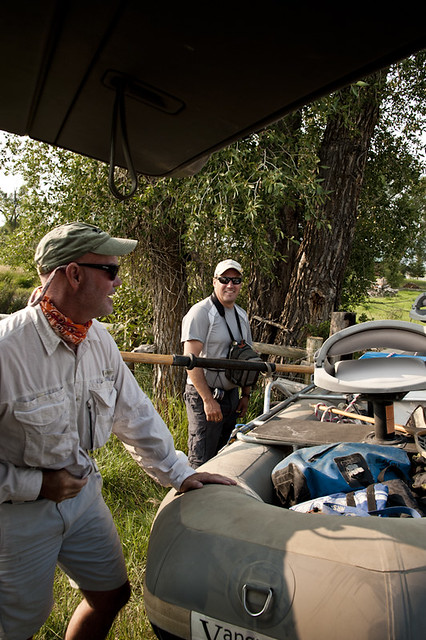 Is there enough water? Who cares? Get the boat in.

We’ve started referring to these places as “off the grid,” not so much for the fact that they are unknown but because they are definitely off our grid. They hold the promise of the dream that keeps an angler awake at night with the wonder of what the day will bring. Every corner, hole, and riffle is new, and every fish is untouched. The fish that live here have never seen my flies or been spooked by my sloppy casts, and look at 3X tippet as licorice rather than ripcord! There aren’t too many of these places anymore, but they are there. Every day is a new day when the water is new to me, whether it’s a new stretch of a familiar river, that pond I’ve driven by for nine years, or that little stream that’s too small to drift but I do it anyway.

I’ve looked at this stream for 20 years and always wondered what it would be like, as you hear things muttered about it from time to time by those guys who look just a little bit “fishier” than the rest. We arrived to find a stream with very little water moving in a direction that looked to be more uphill than down. After a short round of debate and rabble-rousing, we decided to hell with it, threw the boat over the fence and commenced to embark on what was sure to be a memorable adventure regardless of the fish. Some umpteen miles later of dragging the boat through what seemed to be the last best place for mosquito hatching, we breathed a sigh of relief at the sight of the sun setting, with eagles in the foreground and our rig just a few hundred yards away. 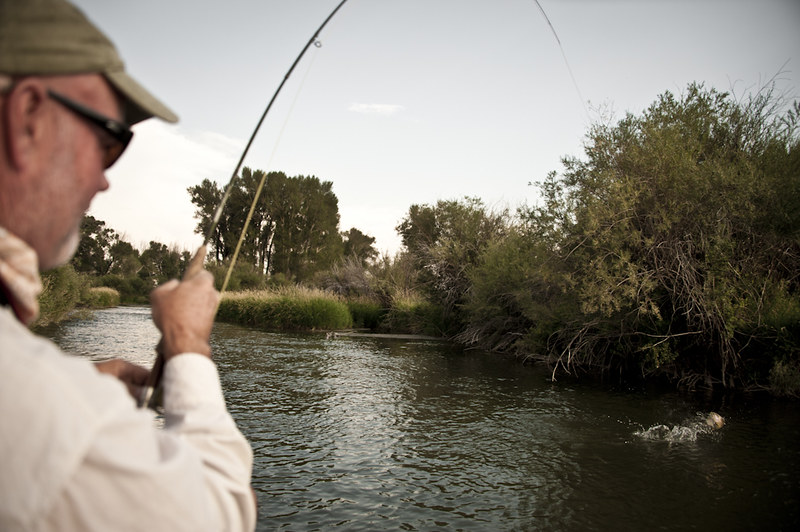 Of course there are trout; this is Montana, after all.

The fishing you ask? It was as good as it was supposed to be which is probably just a little bit more than we deserved. To be honest, I don’t even remember what we caught them on, as it really didn’t seem to matter. There were times during the day when it was everything we had hoped for and other times when it was exactly what we expected. What did happen that day that I will never forget is that friendships were strengthened, the freedom of adventure will never get old, moose are big animals, whitefish can be fun too, Deet is a good thing, and there is nothing in the world that I like to do more than spend a day on the water in Montana.

In case you’re wondering, the Yellowstone is less horrid than before, the Madison is fishing reasonably well, and the Gallatin is still pretty hard to beat. Maybe it was the change of pace or maybe the fish have just decided that it’s time to eat. Either way, since coming back to the grid of Bozeman, fishing is starting to be more like it was just “off the grid.” 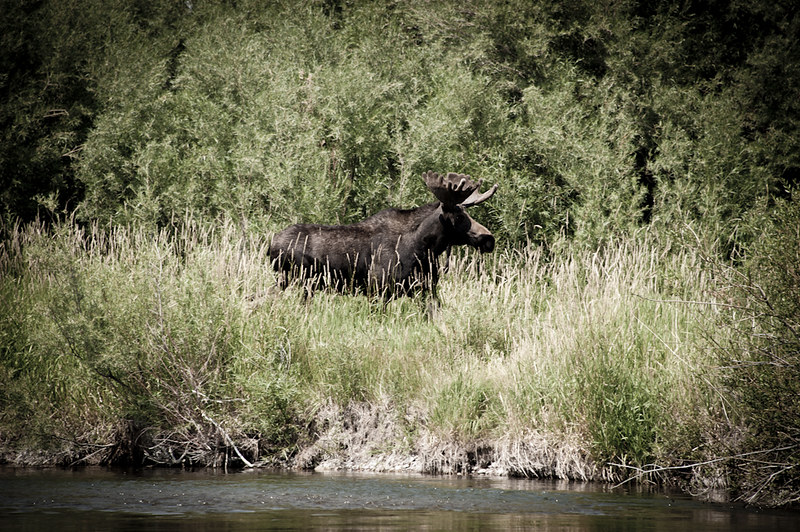 Some of the best parts of such a trip have nothing to do with fishing.

One thought on “Classic Story: The Joys of the Unfamiliar When You Go “Off the Grid””