As a destinations writer for magazines such as High Country Angler and Sierra Fisherman, I often look back on some of my favorite adventures and think of the great times and memories I’ve enjoyed. One of my favorite places to explore is Yellowstone National Park. I found it to be amazing in the backcountry, knowing that most people never leave a pullout along the Grand Loop. We felt as if we took a step back in time, like Lewis and Clark, only carrying pepper spray and fly rods—what an adventure!

We began by driving from Yellowstone’s Canyon Village to the Lamar Valley. My wife and I enjoyed the sights and sounds of Hayden Valley before we turned Northeast on our way to meet Shane McClafin and his team from Sunrise Pack Station.

As we drove, we watched the sun come up over the Yellowstone River, the cold morning and warm river creating a thick fog. It was 22 degrees, hard to believe in August, but the forecast called for hot days and cool nights for our trip into the Lamar River backcountry.

We stopped at Slough Creek for a peek at a couple roadside pools, as we had about an hour to burn before meeting at the Lamar River trailhead. The slow pools offered glimpses of 14- to 18-inch cutthroat that seemed shocked we didn’t throw a fly at them. We admired the trout, took a few photos, and kept driving.

Packing the horses and situating our gear with the help of Shane and his crew, made up of Buddy and Anthony, we met our new friends for the trip. There were Mark and Bob, members of the Boulder Fly Casters; Ed and Carla, a couple from Littleton, Colorado; and Peter and Jacob, a father and son from Berkeley, California. The group packed 15-plus fly rods, and it looked as if we were serious about catching some fish on the Lamar. 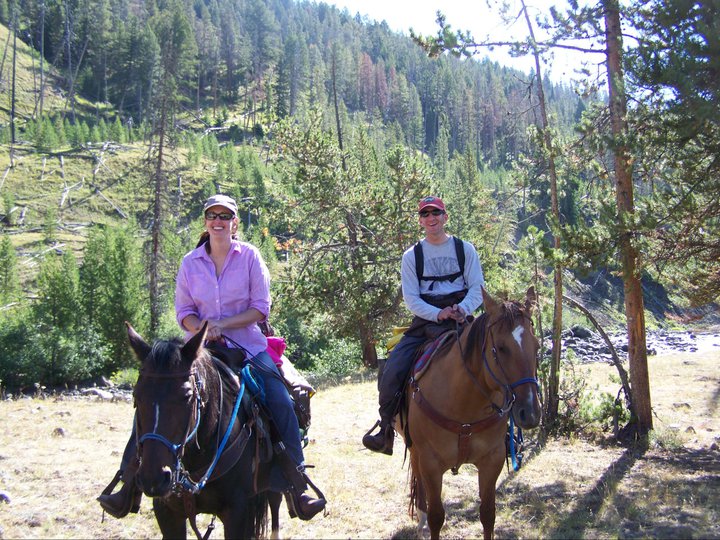 The author and his wife atop their trusty steeds for the ride in.

I had brought a 4-weight, a 5-weight, an old glass Fenwick 6-weight, and a great selection of flies—including PMDs, Stimulators, hoppers, and Chernobyl Ants. We were given some basic instruction on horseback riding, met our horses, and began our trip. What were we going to find 10 miles up the trail following the Lamar River? Solitude, adventure, and willing fish!

On the trail, Liberty and Bingo, our horses, helped us ford Cache Creek, Miller Creek and Soda Butte as we made the 10-mile trail to the first campsite. At camp, Peter and Jacob got their fly gear ready as Shane and his team set up tents and began fixing dinner. I put my Elkhorn together and got my other gear ready for a quick cast before dinner.

Small Gray Drakes and Sulfur Duns produced quick takes on the river, as the smell of steak filled the air. A pool above camp produced five quick cutthroats in the 8- to 13-inch range. The highlight of the evening was a 25-yard cast with my 3-weight combo, which enabled me to get a fly to the largest fish in the pool, feeding on the surface on the opposite shoreline. It was one of those casts and hook sets that give you that satisfied feeling.

Steak and mashed potatoes followed by strawberry shortcake was next on the menu. Dinner was fabulous and a nice campfire followed as we slowly retired to bed. Watching the guys hang the food a good 150 yards from the tents, we felt safe knowing we were in good hands, and besides, if a bear were to come through camp, the horses would give us plenty of notice. Regardless, light sleeping was the norm this deep in grizzly country.

After our first fair night’s sleep, my new fishing buddies and I were greeted by a frosty morning, ice cold o.j., and hot cowboy coffee. As the team from Sunrise Pack Station had advised us the night before, there was no need to wake up early because the sun doesn’t hit the water back in this canyon until 9 or 10, so the fishing would not be good until later.

Sure enough, the group took their time getting up and rigging. I felt a little overdressed with my Orvis Pro Guides on, since everybody else was planning to wet-wade. Really, the only reason I planned to wear waders was because of a recent ankle operation, which means my ankle is prone to twists, and the cold water would be a little rough. I also like to bushwhack, and I rarely fish without my waders. It turns out that the Lamar was actually quite pleasant, so I tried wet-wading at one point and my ankle was fine. 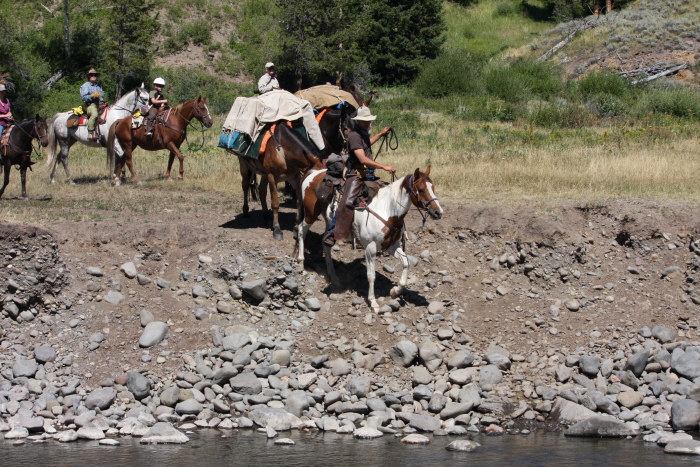 Moving an entire camp via pack train is a big job.

Back to the action: Bob Bush and Mark Riley, the Boulder Fly Casters, headed upriver with me as the others headed downriver. It took about an hour, but once the bite turned on, things really got going. Most of the fish were found in water at least knee-deep, while the rougher riffles also held numerous trout.

The first strike came at the head of a pool as my Stimulator made its drift over a thigh-deep boulder field. Lots of risers came to look, while others hammered the fly. In about an hour, 20 fish came to the surface, but I only managed to stick about seven of them. This theme played on until I reached a 150-yard-long pool along a steep cliff.

Fish were now rising to real bugs, so it was only a matter of time before pinpoint casts came in handy. Quick casts of the Stimulator out in front of the risers brought them right back to the surface time and again. About the only things distracting me from catching more fish were the fact that it was getting hot and I only had my a small bottle filled with limited water, that a grizzly could pop out at any time, and that my two fishing buddies were now long out of sight.

I caught up with Bob and Mark after a few more bends of river, after I had landed 30-plus trout. None was huge, but catching lots of 10- to 15-inch trout on dries agrees with me. I did see a couple 16- to 18-inchers, but they managed to avoid my hook.

“How have you two done so far?” I asked after landing yet another 13-inch cutthroat below them. I thought to myself, Man I’ve caught 35 fish or so, and I’ve actually been fishing water they’ve already fished. Not bad.

“We caught about fifty fish each; this has been a great morning,” said Bob. “We’ve landed cutthroats up to eighteen inches on everything from this smaller Stimulator to nymphs and streamers.”

The native Yellowstone cutthroats in the backcountry aren’t huge, but they are eager.

Bob landed another 13-inch trout as we were talking. Above the pool, the terrain was getting a little rough, so I told the guys I would look around the corner to see if it was time to head back or if the next pool and bend were worth the extra effort.

I proceeded to catch another eight fish on the 40-yard wade, but lots of shallow water ahead sent me back to the guys, who had decided to take the high road back to camp. Armed with bear spray, I decided to fish back and quickly caught another dozen fish on the way. I ran into Shane taking a break from camp, and he was turning heads all over the river with a small tan grasshopper pattern. He said the pattern is one of the only flies he uses on Slough, Lamar, Bechler, and the Yellowstone, and it always works.

On the way back, I was experimenting trying to see how many fly patterns I could catch fish on as I headed back to camp. I caught fish on a Stimulator, black beetle, Chernobyl Ant and Hopper, Joe’s Hopper, Madam X, and a Muddler Minnow. It was fun watching as all these choice patterns produced.

I missed the fish of the day on a side channel near camp. I threw the olive Crystal Stimulator in a small riffle, and the fish chased the fly on three separate drifts, but somehow, he managed to avoid the hook all three times. He was probably 17 to 18 inches, but we’ll never know for sure.

Overall, it was a great day on the water, and we followed it up with a fabulous pork chop dinner and we watched Shane fix some homemade apple pies on an antique pie iron on the campfire. If you’ve never seen how this is done, you’ll be amazed.

Brian La Rue is the former Store Manager of Orvis Reno. He is now a writer and Sales and Marketing Manager for High Country Angler Magazine. 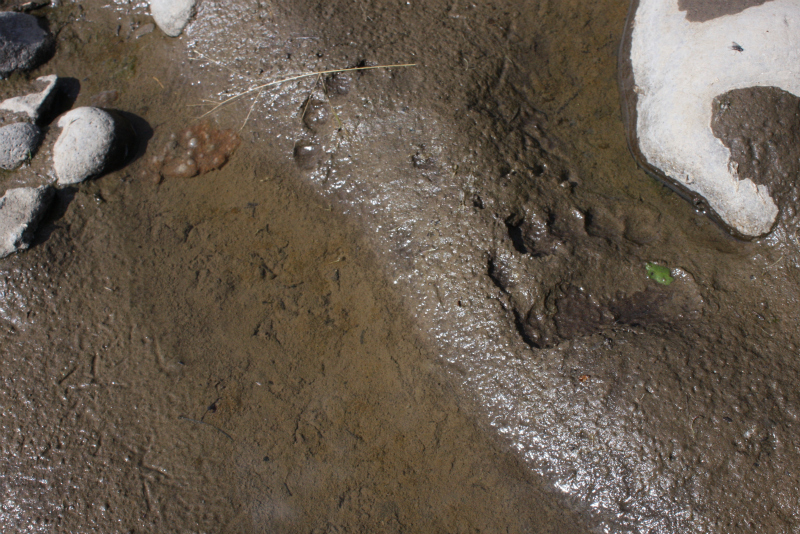 There’s a reason to carry bear spray at all times.

One thought on “Classic Story: Into the Yellowstone Backcountry, Part I”