The wild cutthroats of the upper Lamar aren’t very picky about what flies they’ll eat.
All photos by Brian La Rue

Day three rolled around, and it was time to strike camp and ride another two miles, for a total of 12 miles deep into the Lamar River drainage. The views are incredible back there, as we trotted along to the next camp. Peter and Jacob from California decided to fish the river for the two miles instead of ride to the next campground. Having fished the stretch the previous day with Bob and Mark, I decided to jump on my horse, Liberty, and wait to see what the ride had to offer.

It didn’t take long to get the pack train loaded up and to saddle our horses, and soon we were on our way. At one point, we could see Peter and Jacob down in the valley, fishing away. Before we knew it, the pack train stopped, as we had reached the new campsite, our home for the next couple of days. Everybody pitched in to help set up tents and get dinner ready, as we began thinking about another couple miles of new water to fish.

The afternoon bite was fair, as I walked upriver for about an hour and found numerous takers under a fallen tree. I was wet wading at this point. Skating the Crystal Stimulator in front of the log was the only way to raise these cutts, but it worked for eight fish ranging from 8 to 14 inches. A lone four-by-four buck appeared at the end of the canyon, and since it was getting a little late, I decided it was time to head back to camp for dinner.

That night, we turned in about 10 p.m., just in time for everything to be quiet when a tree in the canyon decided to fall over. The sounds of the cracking tree filled the canyon like a gun shot as it fell. Quite the sound in the dark when you are already laying awake with heightened senses. We slowly drifted away dreaming of the fish we would catch tomorrow.

The next morning, I teamed up with Mark Riley from Boulder for a mission downriver. I grabbed my old trusty 6-weight because the wind had decided to blow. I felt funny pulling my 6-weight out, but sure enough, the steady wind got up to 30 or 40 mph at times and I was able to throw all the big terrestrials with little effort.

Riley and I walked downriver about two miles, to the top of a narrow canyon, and began fishing back to camp. On the way down, we encountered numerous pools and riffles to try. We caught two fish in a small pool instantly, but decided to leave everything else alone before really getting into the fishing. A fresh bear track in the mud reminded us that we weren’t alone, but the 10 a.m. start and warm temperatures meant lots of critters like bears would already be bedded down. We carried spray just in case. 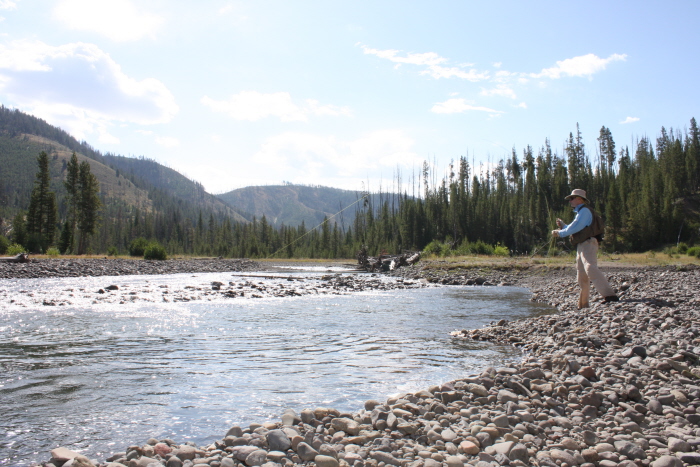 The absolute solitude is one of the great joys of a backcountry trip.

Every plunge pool, deeper riffle, and log jam offered at least a half-dozen fish. A couple 14- to 15-inch cutties were highlights of the day. Mark tried streamers for some fish in a few pools, while I was throwing beetles, Stimualtors, and Chernobyl Ants all day. I had been using the same Crystal Simulator for two days now, and after about 65 fish, it finally came unraveled. So when the top hackle finally fell off, I put the Chernobyl Ant on a got a few bigger fish here and there.

Between Mark and me, we pulled another 50 fish in that day. We lumbered into camp about 3:30 p.m., broke down our rods and prepared for a pasta dinner. It had been another great day on the river…nobody else in sight and prime cutthroat water to ourselves.

On day five we woke up ready to enjoy one last breakfast and the solitude of the Upper Lamar River, while we slowly packed for the ride out. There was a band of clouds back up the valley, over Mirror Plateau. We figured that, by the time we were mounted and riding, there could be a little rain.

Everything was bound and tightened. All horses and mules were set for the ride, and the rain began to fall as the last few saddles were tightened. We dawned our slickers and began the 12-mile ride back to the trailhead at the confluence of Soda Butte Creek and the Lamar. 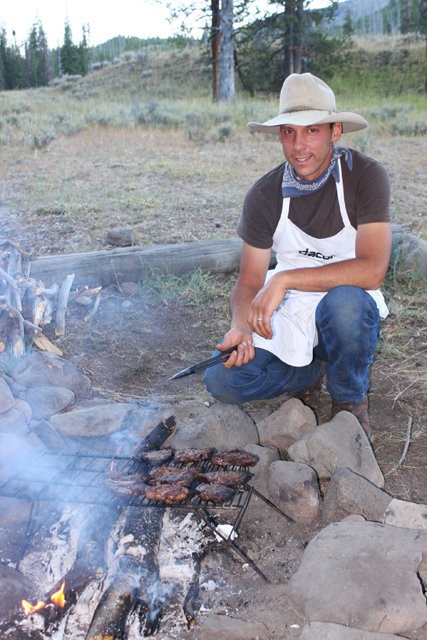 Having a talented camp chef adds to the experience.

It was a wet ride, as the rain came down off and on. The slickers kept us dry, and aside from a few thunderheads that decided to crack right overhead, the ride out went quickly. As we rode, we passed many great pools, and I think I spoke for all us anglers when I said, “We couldn’t have asked for better weather for fishing. The only bad weather comes when we are riding out.” We had just enjoyed three near-perfect days with 70- to 80-degree temps and a little wind. This rain might have hurt the fishing, but we were now done–perfect timing.

The group had had a great time ,and we made some good friends with whom we’ll keep in touch and maybe make a possible fishing outing in the near future. As for the experience, I thought of this trip as a “once in a lifetime” experience, but now that I’ve done it, I will plan to go again when my little ones can handle a horse on their own. I think 15 months is a little young. Shane says children around eight years old or more typically can handle the trip and the horses.

I would highly suggest anglers or anyone who wants to truly experience the Yellowstone backcountry to give a pack trip some thought this summer. The entire time we were out there, we saw just one other pair of anglers on the river. There were times when I felt all alone and glad I had pepper spray on my belt. I waded upriver a couple times and did not see another person for hours, just wildlife. There were many times when I felt like I had to keep looking over my shoulder to assure myself that no bears or other wildlife were sneaking up behind me. That’s a feeling that you just can’t get in many places. I guess you could say I simple feel alive and ready to plan my next backcountry trip.

Brian La Rue is the former Store Manager of Orvis Reno. He is now a writer and Sales and Marketing Manager for High Country Angler Magazine. 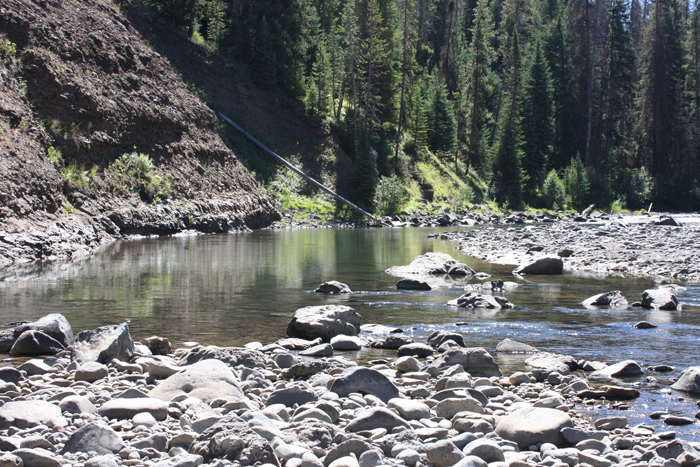 Now that he’s had a taste of the backcountry, the author is planning a return.

4 thoughts on “Classic Story: Into the Yellowstone Backcountry, Part II”