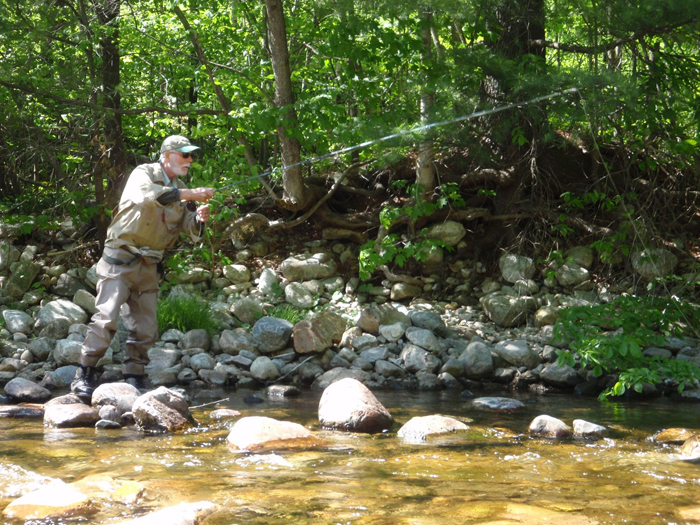 Bill Tapply fishes a Vermont brook-trout stream in the summer of 2008.
Photo by Phil Monahan

Phil and I were sitting on the back bumpers of our cars, breaking down our rods after an afternoon of so-so fishing on the Deerfield River in western Massachusetts. He held up a bottle of water. “Want some?”

I swatted away a mosquito that was boring a hole into the back of my neck.

“It’s a little late for that,” I said. “They about ate me alive on the river.”

“You didn’t carry repellent with you?”

“What about sun block?”

“Didn’t think of it.” I began to shuck off my waders.

He cocked his head. “You always wear blue jeans under your waders?”

I shrugged. “If I happen to be wearing jeans that day.”

I touched my pants. They were, of course, saturated with a hot afternoon’s worth of my sweat, as were my socks and my boxers.

Phil was peeling off the thin, skin-tight long johns he’d been wearing under his waders. I pointed at them. “Maybe,” I said, “I should get me some pantyhose.”

“What is it with you old-timers?” he asked. Phil is a whole generation younger than I, and he won’t let me forget it. “Do you like being uncomfortable?”

“A little discomfort is good for you, sonny,” I said.

The fact is, I’ve never gone out of my way to be miserable. On the other hand, I don’t shy away from it, either. It has always seemed to me that a little discomfort adds some spice to a day of fishing. Many of my fondest angling memories are associated with discomfort bordering on misery. To put it another way, if I hadn’t suffered, I might not remember those times at all.

A pretty June evening on Grand Lake Stream. Perky Hendrickson duns were drifting down the river, and landlocked salmon were taking them with quick, spurting rises.

Vicki, who had lived in Maine and knew about black flies, had brought a head net for the occasion. She waded downstream, aiming for a couple of fish she had spotted feeding beside a boulder toward the tail of the pool. I plowed upstream through the heavy currents to get within casting range of a lineup of risers against the opposite bank.

When I got into position, I looked back. Vicki had disappeared. Found some new fish to work on around the bend, probably.

The salmon weren’t hard to catch, and in the couple of hours before dark I landed six or eight of them and missed several others. They ran to a size–16 to 18 inches, not big for landlocks–and after a few athletic leaps, they came quickly to my net.

I found Vicki back in the car, reading a paperback novel under the dome light.

“I did good. Read four chapters.”

“I didn’t fish,” she said. “I lasted about two minutes.” She cocked her head, squinted at me, touched my face, and then showed me her finger. It was wet with blood. “What’s wrong with you, anyway?”

“Wrong?” I said. “I caught at least half a dozen nice salmon on dry flies. I am excellent.”

“The black flies ate you alive. Your face is all swollen and bloody. Looks like a glob of hamburger. I told you you should’ve worn a head net. I bet you didn’t even use repellent. What’re you, some kind of masochist?”

That night I alternated between fever and chills. I vomited several times.

I’ve floated Western rivers so many times that they tend to merge in my memory–the rivers, the trout, the scenery, the company . . . except for the sunny August afternoon ten years ago when Neale Streeks rowed Andy Gill and me down the Missouri. That was the day that Andy foul-hooked a muskrat on a size 10 Whitlock Hopper. Andy played the animal deftly on his 3X tippet, and in the heat of battle, we didn’t notice that the wind had shifted and the temperature had plummeted and black clouds had darkened the sky. By the time Neale had netted, revived, and released Andy’s muskrat, hailstones the size of cherries were bouncing off our heads and accumulating in the bottom of the drift boat.

Andy and Neale quickly pulled on their hooded foul-weather gear.

I, of course, had forgotten to bring mine. So I huddled there in my T-shirt, shivering uncontrollably while the hail turned to pelting rain. After a while, the rain softened, and a shaft of sunshine cut through the clouds, and a rainbow appeared over the mountains and touched the ground on both ends.

Then, just to get my blood circulating, I tied on a big orange-and-brown bucktail and began throwing it against the bank, and big cannibal brown trout chased it for the rest of the afternoon.

That night, as I lay in my motel bed wrapped in blankets and sneezing and blowing my nose, Andy said, “That was dumb, forgetting your rain gear. You probably got pneumonia.”

“We had good fishing, didn’t we? Bet you never caught a muskrat before.”

“It would’ve been just as good if you hadn’t been miserable.”

“No pain, no gain,” I mumbled between chattering teeth, and I think I believed it.

One sweltering summer morning I walked about two miles across a dusty field to a remote section of the Henry’s Fork. I was wearing my vest and my neoprenes, and when I finally got to the river, I shucked off my waders and sat down in it. I don’t remember whether I ended up catching any fish, but I do remember how good that frigid water felt on my overheated body.

On another broiling Rocky Mountain summer’s day, I fainted from dehydration in the middle of an intense Yellow Sally hatch on the Bighorn. Keeled over in the water (which, fortunately, was only calf-deep). We had plenty of water in the drift boat. But how can a man think about drinking when the river is boiling with big brown trout?

My friends don’t believe me, but I am neither a masochist nor a stoic. I don’t regard suffering as manly, and I don’t seek it out. Usually the discomforts associated with fly fishing are minor and tolerable–a little heat, a little cold, a little rain, a few biting insects, hunger, thirst, sunburn. Sometimes they’re more extreme, and when I’m unprepared for them, I suffer–which, by definition, is unpleasant.

Discomfort is relative to expectation. I began fishing long before the invention of Gore-Tex and Polartec and other high-tech fabrics. Waders were made of canvas or rubber. They weighed a ton and always leaked, and when my feet and legs got soaked, I never knew whether it was a new leak or just my own sweat. Usually it was both.

Rain gear was just as bad. Wearing a canvas or rubber slicker was like being locked in a sauna. Getting rained on was refreshing by comparison.

In those days before the invention of deet and sun block, no so-called repellent actually repelled black flies, and only shade kept off the sun. So I got bitten and sunburned and kept fishing, because the only alternative was not to fish.

Over the years, I’ve learned some lessons about discomfort, and while I don’t like to admit it to young fellers like Phil, I prefer comfort over discomfort. My problem is, comfort isn’t something I’ve ever associated with fishing, and minor discomfort doesn’t bother me. So when I plan for a day of fishing, I still tend to focus my attention on my tools–flies, rods, leaders–rather than on accessories designed for my physical comfort.

I have, of course, paid the price.

A couple of weeks after Phil and I fished the Deerfield, I received a parcel in the mail. It contained a pair of thin, skin-tight long johns. The pamphlet claimed they were made from a fabric that was “unsurpassed for sweat management.”

Out of deference to Phil, I wore that high-tech underwear under my waders one blistering day this past July. It was a revelation. Those long johns did manage my sweat. My legs remained dry and cool in the heat of the day, and they were warm when the air grew chilly in the evening.

I was actually comfortable.

It was almost enough to make an old-timer consider packing sun block and insect repellent and rain gear and drinking water with him when he goes fishing.

For a list of great books by William G. Tapply (many available on multiple formats including iPad, Kindle, Mobi, etc.), click here. Don’t miss Sportsman’s Legacy: A Rich Memoir of a Man’s Life with His Great Sportsman Father, His Beloved Family, and His Adored Brittany.