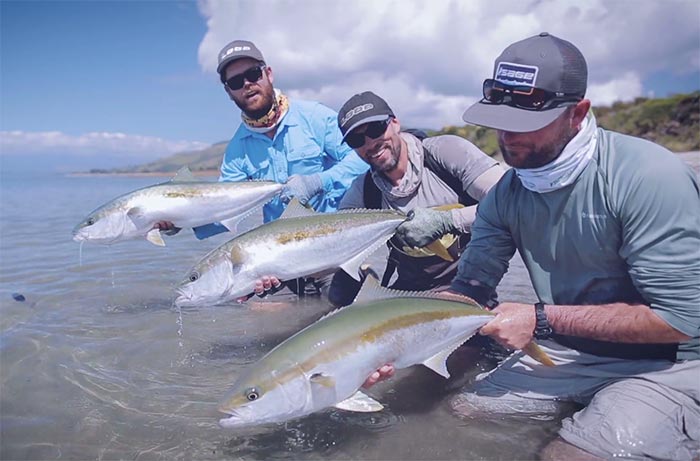 Who knew that New Zealand could provide incredible shots at kingfish on the flats?
Screen cap from “King of the Flats” by Aussie Fly Fisher

[Editor’s note: Anton Donaldson is a fly-fishing guide on the South Island of New Zealand. In last week’s Friday Fly-Fishing Film Festival, we posted a video called “King of the Flats,” about a unique saltwater flats fishery, and Donaldson emailed me about it. I asked him to describe how he came to discover that kingfish (a.k.a. yellowtail amberjack) could be caught on the fly by wading anglers around the town of Collingwood.]

The town of Collingwood lies two-thirds of the way across Golden Bay heading West. It is a two-hour drive from Nelson and pretty much the end of the road in the northwestern corner of the South Island. The town itself has around 300 residents and another 700-odd people living in the adjacent Aorere valley. On the main street, you will find a couple of general stores, a mini supermarket, a tavern, a cafe, a petrol station/mechanic, and a small museum of local history. The people are the real deal, genuine good ol’ kiwi folk. Most are farmers, and the rest seem to work at Health post (a herbal supplement distribution centre). The locals have been quite taken by surprise at the invasion of fly fishermen. 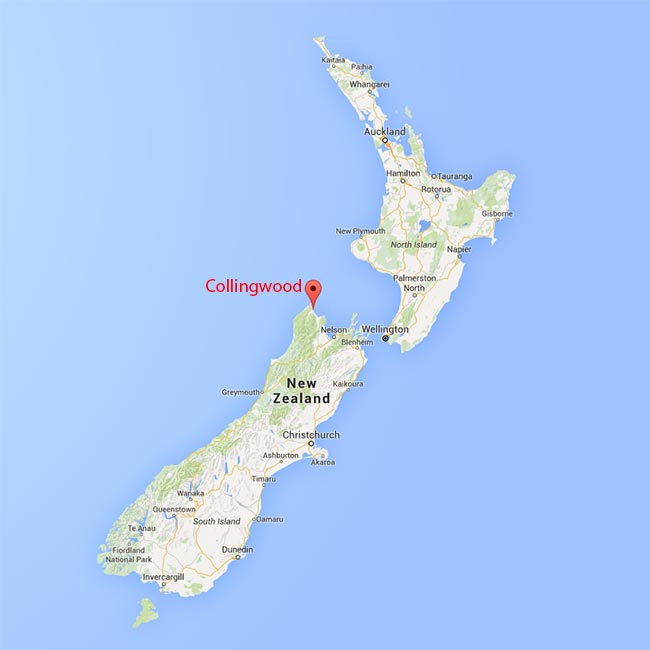 About four years ago, I was fishing out of my 12-foot boat at the mussel farms about twokilometers offshore from Collingwood. The wind came up and the sea became very choppy, so I decided that it might be best to head toward shore and cruise along the beach back to the boat ramp so as to shelter from the prevailing wind. As I got to within 50 meters of the beach, I ran over the top of a large black stingray. As I passed over, I could see two large yellow fish. I suddenly realized that these were kingfish. I continued towards Collingwood and again I saw a ray and another set of kingfish in tow.

The next day, I went back to the spot in the boat at the same time of day, but this time armed with a softbait rod. I soon saw more rays and more kingfish. In no time at all, I was catching them thick and fast. I found I was able to get really close to the fish, sometimes within a mere meter of my legs. I witnessed them with their tails out of the water and on the surface creating huge bow waves as they charged into a school of baitfish.

I took an 8-weight fly rod with me and began hooking the kings on big trout streamers. This was the next level of fulfillment, and from that time on, I have never looked back. I have been catching these kingfish in the shallows for a few years now, and I find it never gets old. Every day that I return from the flats I have learned something new. During the past summer, I decided to share this amazing fishery with the world, as it was too good to keep it to myself. I also felt it could be a shot in the arm for local businesses. Next summer will see even more fishermen come to the area. The fishing here can be great, and at other times it can be very humbling. The days when the conditions are right you can have 40 shots and other days you would swear there are no kings in the whole of Golden Bay.

With the influx of extra fishermen comes pressure. Next year will be a true test of how much pressure the fishery, the kingfish, and perhaps even more importantly, the stingrays can take. One observation I have made is the speed at which the stingrays move. When it was just me fishing, they would cruise very slowly, and you could pick the kngfish off them one at a time. Now they move through with some pace, and you may only get one or two casts at them. Coupled with that is going to be the large numbers of people on the beach.

Now that the word is out, it will be up to anglers to ensure the health of the fishery.
Photo by Anton Donaldson

It will be interesting to see how the dynamic of fishing in a crowd plays out. I see potential for fighting over shots at fish, crossed lines, and a few disgruntled fishermen wanting a bit of solitude. My advice would be to spread out. There are several places that fish really well at times, and people are starting to realize this. Having done a lot of exploring, I can tell you that there are other places that fish as well, if not better, and they are waiting for you to discover them. At the end of the day, respect goes a long way.