A big striper on the fly will make you forget about trout streams for a while.
Photo by Sandy Hays

The small New Hampshire town where I grew up is within an hour’s drive of some of northeastern New England’s best striper fishing. Yet, instead of exploring the waters of Plum Island, Cape Ann, or Great Bay, I chose to hone my fly-rod skills by casting for eight-inch stocked trout in local ponds and streams. These were the quintessential “rubber” fish, and it was sometimes hard to tell if the tug on the end of your line was a trout or a stick caught in the current. Whenever I got a hankering to catch a really big fish, I’d drive 3 1/2 hours north to the Androscoggin River. There I could catch an occasional 15-inch brown trout, and, if the wind was right, I might avoid the sulfurous stench of the Berlin paper factory.

I’m embarrassed to say that nothing changed when I moved to New Jersey after college. Although the entire Jersey shore—hundreds of miles of coastline from Hoboken to Cape May—is a Mecca for saltwater anglers, I never once wet my line in the salt during the seven years I lived there. Instead, I would throw my rods in the car and head west to the South Branch of the Raritan River, hoping to find a piece of water that hadn’t already been flogged to a froth by a dozen anglers that day. There were times when the river looked like something out of a photo from the California Gold Rush—so crowded that it was impossible to wade in without practically standing on top of another fisherman. In those situations, I’d simply drive back home and unload my gear, never considering that 20 minutes to the east lay the striper-filled waters around Sandy Hook.

At the time, I spent my summers working as a guide in Alaska, and it was there that I first experienced the thrill of a 20-pound fish tearing line off my reel. I loved pitting my fly-fishing skills against the power of big king salmon, fresh from the ocean. But when I returned to New Jersey each fall, just as the striper run was starting to pick up along the beaches, I’d put the 9-weight in the closet and head back to the trout streams to see if I could elbow my way onto the water.

It simply never occurred to me that there were much bigger—and much tougher—game fish to be caught in salt water. Even after I was given a copy of Lou Tabory’s Inshore Fly Fishing, I couldn’t get past my basic prejudices: the beach was a place for scoping babes and riding waves, not for fly fishing. Perhaps my lack of interest in saltwater species stemmed from my only childhood ocean-fishing experience, when I spent a whole day standing on a heavily-trafficked bridge to catch a one-pound pollock on a surf rod as thick as my forearm. Some fun.

I must admit that the ocean intimidated me. When I was 12 years old, I saw Jaws, and ever since I’ve been wary of anything that swims the briny deep. (A childhood run-in with a dogfish only confirmed my worst fears.) As a fisherman, I was intimidated by the apparent featurelessness of the ocean. On a river, I could look at riffles, pools, and eddies and identify the places where fish would most likely be; I could understand the structure of the environment. But the ocean was vast, uncharted territory, and I thought that the only way you caught fish in it was by chumming them up or by dropping bait on the bottom and hoping something swam by.

That all changed about 20 years ago, when I spent a summer weekend on Cape Cod with my siblings and their families. A few days before the trip, my older brother—who had been a striper fisherman for years—called to tell me that I should pack my fly-fishing gear. I was skeptical, but he talked me into it, assuring me that not only were there fish to be caught, but that fishing would also be an excuse to flee a houseful of hyperactive rugrats. It’s hard to argue against that kind of logic.

On our first evening there, he suggested that we walk down to the beach to cast for stripers. I’m a good sport, so I went along, never considering that we’d actually catch anything. The flies that he lent me wouldn’t fit in any of my fly boxes, so I carried them in a Zip-Loc bag. 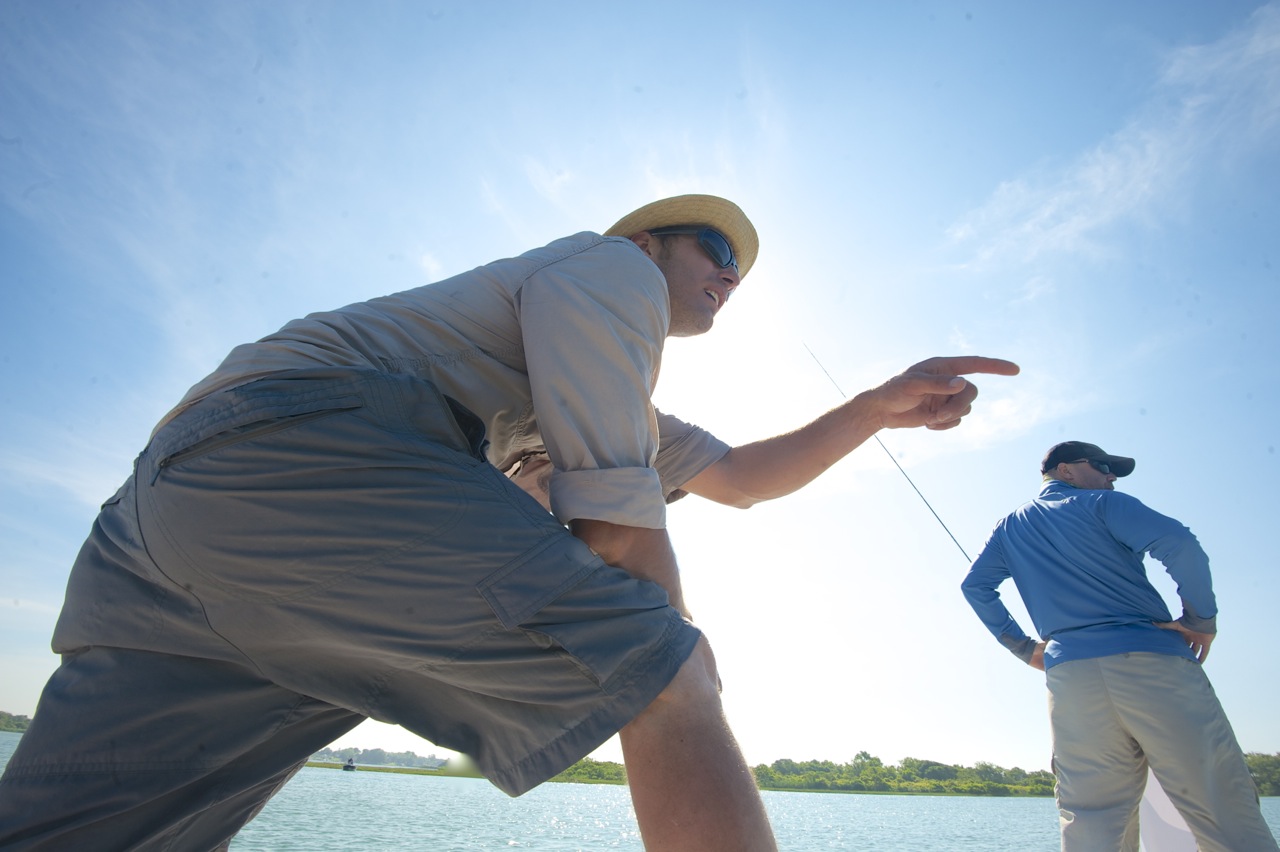 After what seemed an interminable hike to the end of a narrow spit, we rigged up and waded into the water. One of the first things that I noticed was the stiff current running through the gap created by the spit and the opposite shore. What I had assumed would be nothing but featureless ocean looked, in fact, a lot like the rivers I was accustomed to fishing. I recognized current seams, eddies, and changes in depth where fish were probably holding. (If I’d given Tabory’s book more than just a cursory reading, this wouldn’t have been such a revelation, of course.)

I cast upstream, allowing the fly and the line time to sink, and retrieved the fly quickly as soon as it got downcurrent of me. On the third cast, I felt a thump and then resistance. It was a tiny striper, no more than 12 inches, and it was easily overpowered by the 9-weight rod. But still, it was a fish. Not bad for a novice. Two casts later, a slightly bigger fish whacked the fly. “This is easy,” I thought. As always, that kind of arrogance was a big mistake: I didn’t get so much as a bump for the rest of the night.

I can’t say that I was hooked—neither fish had put much of a bend in the 9-weight rod—but I was certainly intrigued. The notion that I could actually catch fish from the ocean suddenly opened up my mind to fantasies of landing a 30-inch striper and then holding it up in my brother’s face. I needed more information, so I went back to Inshore Fly Fishing and I started reading those magazine articles on saltwater fishing that I used to skip over.

Armed with a little knowledge gleaned from fishing writers, I headed off to Martha’s Vineyard to take part in the annual Striped Bass & Bluefish Derby in September. Sure, I’d never caught a striper over 15 inches, but I felt that my odds were good, what with beginner’s luck and all. Plus, I’d get to hang out with some experienced saltwater fly fishermen, and I could learn the ropes.

The first thing I learned is that fishing for saltwater species and fishing for anadromous salmon have something in common: sometimes the fish simply aren’t there. That one evening on Cape Cod had obviously used up whatever beginner’s luck I had, because the five anglers in our party thrashed the surf, the bays, and the inlets of the Vineyard for three days and produced exactly one striped bass. Since I was accustomed to not catching fish in the streams of New Jersey, the concept of being shutout wasn’t all that novel. Rather than being discouraged, I found that I enjoyed the whole experience.

Despite the poor fishing, that trip taught me several important things: I learned that I love being in the ocean at night, when the air is calm and the lights of houses along the shore look like a string of stars. I like the gentle rhythms of blind-casting into the darkness, the anticipation of a strike on every cast. And I like overcoming my childish fears of the deep—shining my flashlight into the water to see the minnows, sand eels, and whatever swims by. (I don’t know if I’ll feel the same way if I ever do see another dogfish, but I hope so.)

It was a few years before I caught my first “keeper” striped bass, but there were tons of schoolies and “almost” fish in between. I’ve since caught stripers from Maine’s Sebasco Harbor to the waters off Rhode Island’s Point Judith to Chesapeake Bay. I can’t believe it took so long to get over my trout-fisherman’s prejudices. Don’t make the same mistake. Get on out there this summer, if you can.