All of us must lead by example to fix this problem.
Photo via Sea•thos Foundation

It’s hard not to notice the increase in the amount of trash that people are leaving behind after surf-side activities. We’ve all seen the usual culprits: wrappers, cans, paper products, plastic and styro cups, cigarette butts, and glass bottles, which I find particularly disturbing. Lately, I’ve zeroed in on what anglers leave behind. The list: lots and lots of mono, plastic spools, leader/line wrapper, discarded lead, styrofoam containers for worms, and of course the poly-bags that all this stuff was placed in in the first place.

Let’s face it, we’re just not that perfect a species—so there will always be some liter here and there. I’m not particularly happy about this, but I can accept it.

Recently, my municipality launched an “introduce your kid to fishing” campaign. A great idea, no question. A total of 6,000 trout were put into a small lake, and 300 fishing rods were lent to children over a 72-hour period. As you could guess, the fishing was a little cramped, but the program was a huge success. The children arrived, and they caught fish, some for the very first time. It’s a rare thing to see so many “Kodak moments” in such a short time. One kid caught a resident carp that tipped the scale at 22 pounds—the highlight of the day for sure.

At the end of the event, after the rods were handed back and the kinds and families were gone, there was a mountain of litter left behind. It wasn’t quite evident at the end of day one, and day two looked decent, as well. But by that third and final day, the message was very clear that all the environmental degradation news in the world has not sunk in. At all. 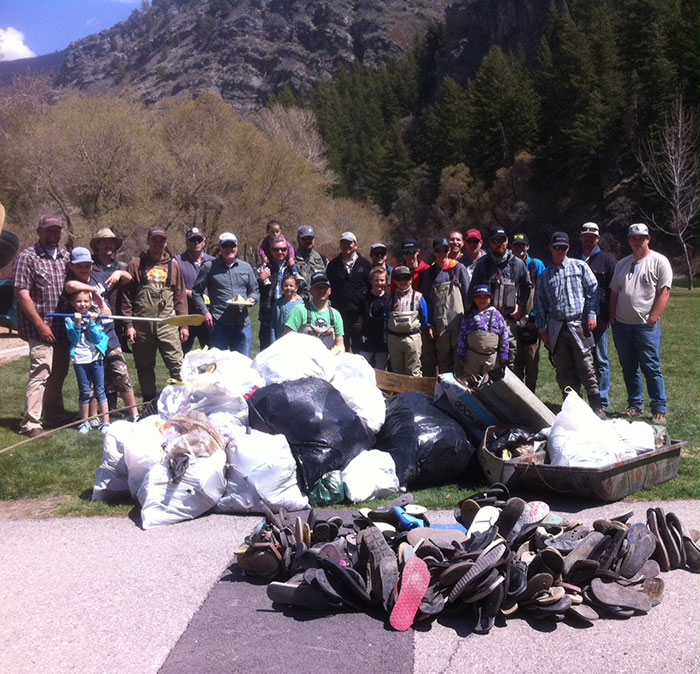 Can you believe that this was just a single day’s haul on a river in in Utah?
Photo by Ryan Newman, Rocky Mountain Outfitters

We have to ask ourselves: What is it that we’re not getting? Trash is unsightly, unhealthy and, in some very immediate ways as well, very dangerous. Is it that it’s not unsightly enough? Or have we grown used to it, and are willing to accept and tolerate increased amounts at our feet and in streams and on beaches?

It’s easy to blame individuals, even organizations and institutions for current trash levels. But blame solves little to nothing, and educating people about environmental woes will only go so far in changing our behavior. The only way to solve this problem is by adjusting our attitudes, and there are two ways to do this:

1. Practice what you preach and lead by example.

2. Adjust your attitude. Make it known, to children and adults alike, that littering is just not acceptable and should be viewed as a cardinal sin: a direct insult to the planet and, by extension, the people that inhabit it. . .all of us.

It’s only by creating this real loop that people might begin to understand that their actions have a real and lasting negative impact on their playgrounds and their lives.

Robert Morselli is the research director for the television show “How It’s Made.” A compilation of Robert’s fly fishing articles can be found at Fly Fishing Insider.

One thought on “Don’t Let Our Fishing Waters Get Trashed”