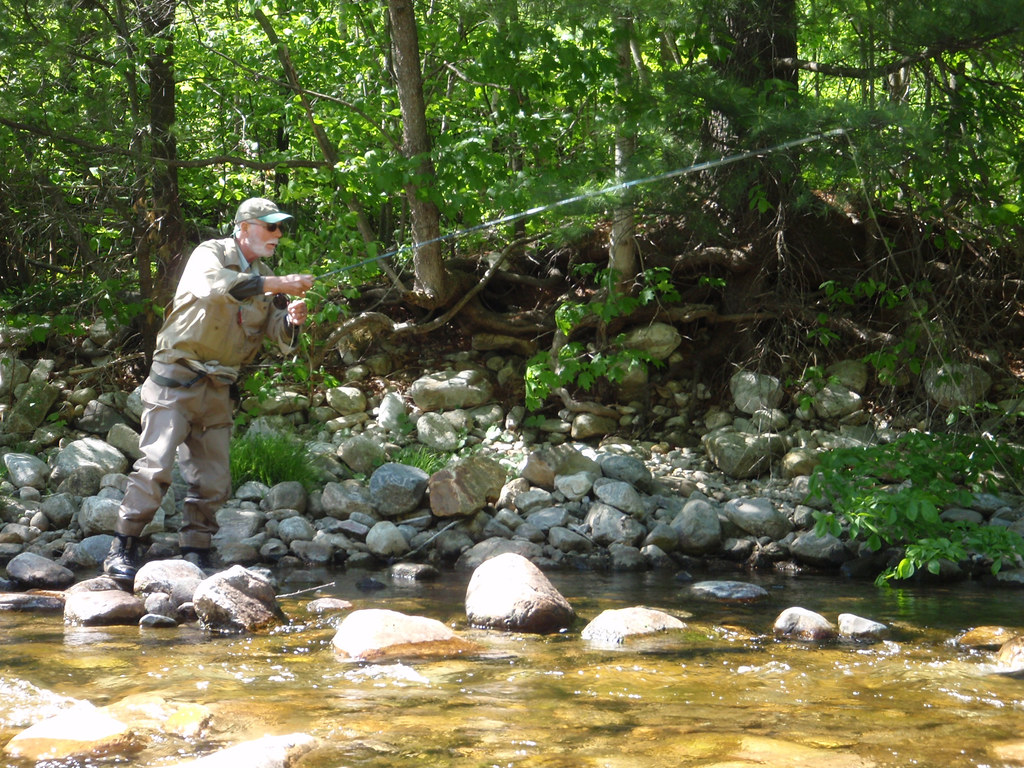 It happened again last winter, this time in the form of an e-mail from my friend Skip Rood. “Just got home from a long and inconclusive—and at times acrimonious—discussion at the Boston Fly Casters,” he wrote. “To settle it once and for all, I’m conducting a survey of my most trusted angling compatriots. It’s time to settle this eternal, infernal debate once and for all. I aim to compile the definitive list of the ten best trout flies. I hope you’ll participate.”

Several years ago, out of deference to a chronic cervical injury, I discarded my weighty fishing vest in favor of a small fanny pack. This required me to heed Thoreau’s dictum to “simplify, simplify.” No longer could I carry a dozen fly boxes, my lunch, my foul-weather gear, a pair of sneakers, emergency repair kits and streamside fly-tying kits and first-aid kits, tippets and leaders, spare reels and flashlights, fly floatant and insect repellent, split shot and strike indicators, and all the other junk that gave me a backache. My fanny pack holds two small fly boxes, a few spools of tippet, a couple of spare leaders, dry-fly floatant, bug dope, sun block, a stale Granola bar, a spare cigarette lighter. Everything I need to get me through a day on the water . . . provided I have the right flies in with me.

Stocking those two fly boxes has forced me to debate the “best flies” question every day I go fishing.

I always resolve those debates by recognizing one important fact: It all depends.

So I shot an e-mail back to Skip with these questions:

Skip’s reply was succinct: “All-round trout flies. Anywhere, anytime. Patterns. Ten because I said so, the ten patterns you’d have with you if that’s all you were allowed. Rank ’em one to ten.”

In the real world, the ten flies I’d want for a Montana spring creek in August would not be the ones I’d take to a Catskill freestoner in June or a Colorado tailwater in September, and none of those assortments would be what I’d choose for a Cape Cod pond in April.

First, dry flies. I start with drys because I enjoy surface fishing the most. I go to places that promise dry-fly fishing at times when I expect trout to be rising, and I do not want to be without the flies I’ll need to fool them. Since trout are generally more fussy about the surface imitations they’ll take than subsurface flies, the choice of dry-fly patterns is most crucial.

My father, in the spirit of experimentation, once spent two entire trout seasons using just one dry-fly pattern (his generic Nearenuf) and claimed that he wasn’t particularly handicapped. I know guys who fish with nothing but a Parachute Adams. Others stick to a Royal Wulff. It strikes me as a pointless affectation, this stubborn refusal to try to match real insects, but these guys seem to catch their share of fish.

In fast-moving freestone, pocket-water streams, where hatches are sparse, bugs are scarce, and cautious trout go hungry, any old high-floating dry fly will work. But Skip said, “Anywhere, any time.”

Just considering PMDs . . . at different times and on different waters, the trout seem to demand body colors ranging from pinkish to tan to olive to orange to yellow, and sizes from 14 to 20. Sometimes it seems to me they prefer quill bodies over dubbed, and parachute or hackle or comparadun or no-hackle designs.

Well, usually they’re not that fussy. Get the size right and the color approximate, and I can take some fish.

I’ll get by with two mayfly patterns, I think, provided I can carry them in a full range of sizes. One tan/yellowish and the other grayish. Light Cahill and Adams, then. In tiny sizes, they’ll take care of my midge needs, too.

Stimulator for stoneflies and hoppers. Four.

Seven: Rusty Spinner, for that crucial last stage of the hatch.

Which leaves three subsurface patterns. That’s about the right proportion for me. I do about 70 percent of my trout fishing on the surface.

When nothing’s cooking on the surface, and anytime it’s apparent that trout are eating them, I tie on a nymph. I could get by with two nymph patterns, one dark and one light. Pheasant Tail and Hare’s Ear, both beadheads. In giant sizes, one or the other will work for stoneflies. Midsize for mayfly nymphs and caddisfly pupae. Tiny ones for midge pupae.

Number ten, when nothing else works: what anglers everywhere call “the good-old” Woolly Bugger. The Bugger catches fish anywhere, anytime, which is what earned it the right to be called “the good-old.”

I submitted my list—in that order—to Skip, and a few weeks later he sent me the results of his survey:

Are you kidding me? What were these people thinking? Who needs a Prince Nymph? If you’ve got a bugger, what do you want a muddler or a bucktail for? What about all the tan/yellow mayflies you’ve got to imitate? And what’re you going to do during a spinnerfall? Or when they’re eating emergers? Huh?

Before I could compose a message to Skip that adequately expressed my outrage, I got a phone call from my friend Marshall Dickman in the Hudson Valley. “Just got home from a meeting of the Angler’s Club,” he said. “Had a stimulating discussion, trying to agree on the four best trout flies. What do you think?”

Hm. Four, I thought, was a more interesting problem than ten.

“Am I allowed to bring a pair of scissors with me?” I said.

“These four flies. Can I carry them in different sizes?”

“Yes. That was stipulated.”

“What about nymphs, emergers, and spinners?” he said. “What about stoneflies and terrestrials and scuds, for heaven’s sake?”

“Clever,” said Marshall. “Though in the spirit of our debate, I’d call it cheating.”

“The spirit of your debate,” I said, “was to conduct a meaningless midwinter debate, if I’m not mistaken.”

Whenever I sit down at my fly-tying table to restock my fly boxes for the upcoming season, I gaze out my window at the snow-filled woods and recall the rivers and hatches and difficult trout of previous years, and I daydream about the places I hope to fish in the future. A winter afternoon of fly tying always promotes these reveries. If it didn’t, I’d probably buy my flies.

The memories and daydreams help me to think about what flies to tie. Should I really devote a precious compartment in my fly box to gray-drake spinners? I sure needed them that evening on the Henry’s Fork. What about those early black stoneflies? And then there was that Hexagenia hatch . . . .

Whether you carry two fly boxes in your fanny pack or a dozen in your bulging vest, you cannot be prepared for everything. One way or the other, we all have to pick our ten—or four or twenty or one hundred—“best” flies.

It may be a debate with no answer. But it’s not meaningless.

12 thoughts on ““The Eternal Debate,” by William G. Tapply”