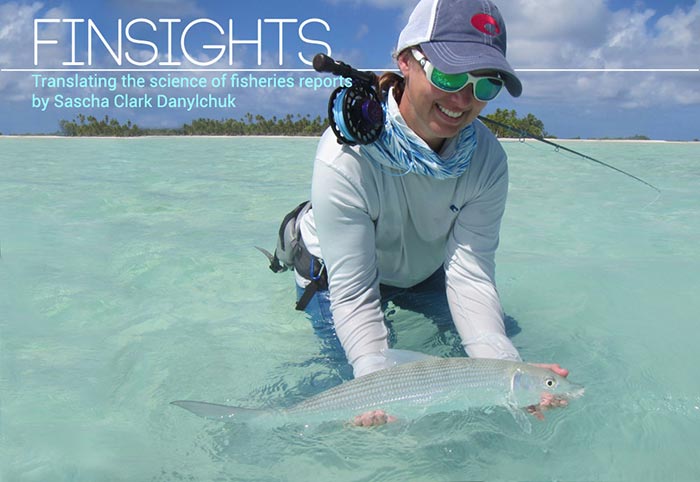 The author, Sascha Clark Danylchuk, cradles perfection in the form of a bonefish.
Photo via KeepEmWet Fishing

[Editor’s note: Our Friends at KeepEmWet Fishing have been running an awesome series by fisheries scientist Sascha Clark Danylchuk that seeks to connect anglers and the science behind their beliefs. So far, there have been seven installments. Read the introduction here, and then click the links below for the articles.]

I have been seeking water for as long as I can remember. As a child, it was the beach or a mountain stream in which to play. Eventually, I began to search for the creatures living in the water and it was no great surprise that this led me to become a fisheries scientist. I still love to play in the water, and more often than not, that involves fly fishing.

More and more, however, I find the intersection between my work as a fisheries scientist and my passion as a recreational angler to be messy and convoluted. I admire that innate conservation ethic exhibited by many anglers, but find the lack of scientific backing to their practices frustrating. Likewise, I appreciate my colleagues’ quests to solve issues and find sustainable solutions, but I am aggravated that their ideas rarely make it past esoteric scientific publications.

In my quest to clarify fisheries science to recreational anglers, and to encourage scientists to make their work accessible to a wider audience I have teamed up with Keepemwet Fishing for a blog series I am calling Finsights in which I will “translate” some of the most important scientific studies on recreational angling so that they can be understood by more people.

But, let’s begin with the scientific publications process and why scientists write in such a complex, dense, and let’s face it, dull style. Scientific publications were developed as a means for scientists to make their work known and judged objectively. The process of publication requires a scientist (or, more often than not, the group of scientists) involved in a study to write a manuscript, which follows a very specific format, and to submit the manuscript to a journal of their choosing. There are hundreds of journals, and they vary in subject matter as well as quality. Once a manuscript is submitted it is read by an editor or associate editor who then must find two to three anonymous peers to also review the manuscript and decide if it is worthy of publication. Publications are reviewed based on the quality and merit of the study, as well as the quality of the writing. If the manuscript is accepted (usually after some revisions are made), it is published. If it is rejected, the authors can submit it to another journal and try again. Throughout this entire writing process the goal is precision; the writing has to be absolutely accurate and the wording extremely precise, making the journal articles both dense and generally dull (no flowery adjectives or subjectivity allowed!). There is also a limit to how much the authors can extrapolate their results. 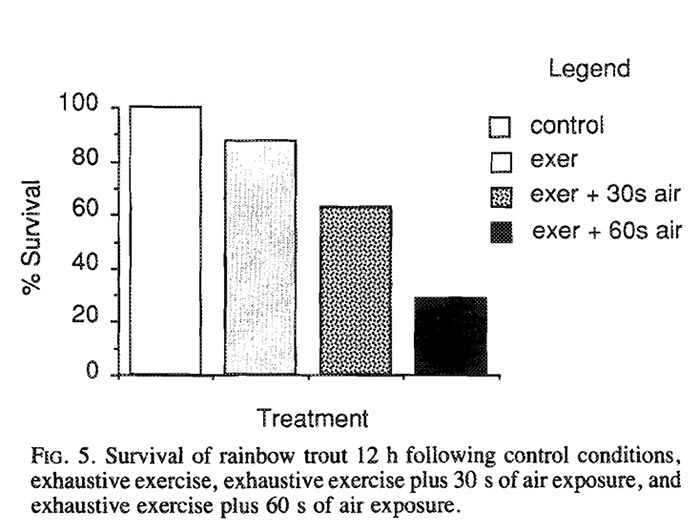 This series aims to explain research on subjects such as the effects of air exposure on fish.
Photo via KeepEmWet Fishing

The advantages of this process is that there is an ongoing body of literature which has been judged as sound and provides the basis of further study for any given scientific subject. The number and quality of peer-reviewed publications has also become the standard by which scientists are evaluated.

The disadvantages are that the whole process (from submission to publication) can take months to years, meaning that by the time one study is published the scientist is often working on the next study. Also, you cannot publish a study in more than one journal, and authors of manuscripts are not paid for their publications, if anything they pay the journal to publish their work.

The realities of the peer-review process can also hinder publication. Not only is it often difficult for editors to find reviewers for a manuscript (reviewers volunteer their time and it can take many hours to properly review a single manuscript), but I have also heard many stories of manuscripts that were rejected because an editor failed to find a peer-reviewer who was a true peer and adequately understood the subject matter of the manuscript. The manuscript can also be rejected based on the challenge to adequately communicate the science, or that the science simply wasn’t ‘up to snuff’.

Next time I’ll go through the major sections of a scientific paper and provide some hints for discerning the important bits and finding the ‘highlights’ that are important to anglers interested learning more about the fish they are after.