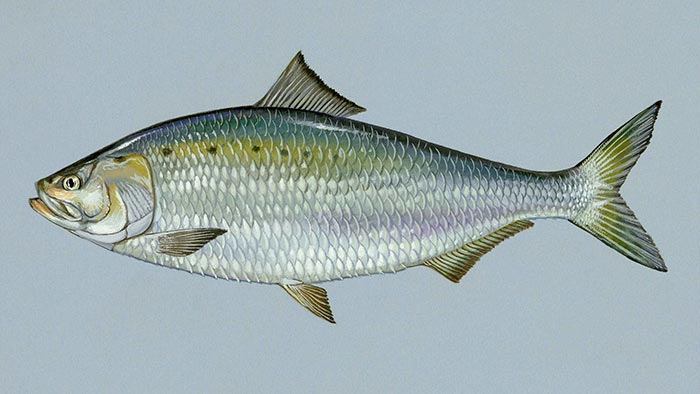 While salmon, steelhead, and striper runs garnish the most attention from the angling press, the annual migration of American shad offers fly fishers the chance to tangle with a brawny saltwater fish that likes to go airborne and will double-over a 5-weight. Not to be confused with other baitfish-like shads, the American is the largest member of the herring family and can reach 30 inches long. The world record—taken from the Connecticut River in Massachusetts by Bob Thibodo in 1986—weighed in at 11 pounds, 4 ounces. Some baitfish.

American shad are born in freshwater in the spring and migrate downriver to the ocean in the fall. After three to five years as parts of huge schools in the salt—where they feed on plankton—they return to their home rivers to spawn. The smaller males return first. Like salmon, shad do not eat while in freshwater, and about half of the spawning fish perish from the exertion of spawning. 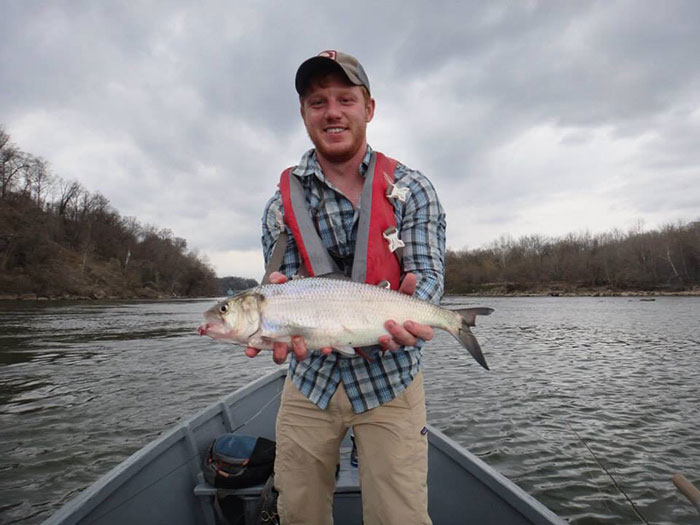 A good-size American shad puts up a strong fight, as angler Dalton Terrell can attest.
Photo by John Nguyen

Range and Distribution
American shad can be found in rivers feeding the Atlantic from as far south as the Saint Johns in Florida all the way to Newfoundland. The fish usually enter the St. John’s in January or February, but don’t appear in northern rivers until May or June. In the 1870s, American shad were planted in the Sacramento and Columbia Rivers, and most runs there are in May and June. The West Coast populations were so successful that eggs from the Columbia—the largest shad run in the world, from three to five million fish per year—were used for the shad restoration on Pennsylvania’s Susquehanna River.

Like those of many other anadromous species, East Coast shad populations decreased steadily as more dams were placed along rivers, impeding spawning runs. In 1789, roughly 830,000 shad were harvested from the Merrimack River, but a series of dams reduced that number to virtually zero in less than a century. Restoration efforts continue in many areas, and one of the more ingenious structures is the Hadley Falls Fish Lift, in Holyoke, Massachusetts. The fish swim into two elevators, which then carry the fish over the dam. 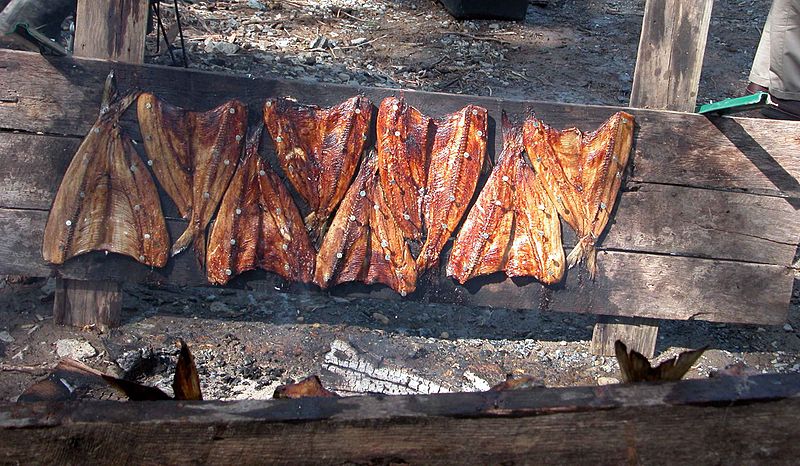 “Planked” shad is an old-school way to prepare this delictable fish.
Photo by Walton LaVonda, U.S. Fish and Wildlife Service

History
The Latin name for shad is Alosa sapidissima—which translates “most savory shad”—and the pages of American history reveal centuries of fondness for the taste of “the poor man’s salmon.” Although the fish is extremely bony, shad lovers concocted many different ways to prepare it for the table, including “planking,” in which the fish is cooked on hardwood boards over an open fire. Shad roe is also considered a delicacy by some.

For at least 8,000 years before the arrival of Europeans, Native Americans watched for the flowering of the shadbush—also known as the June berry or serviceberry—which marked the beginning of the annual run. George Washington would send his servants to Great Falls, 30 miles up the Potomac from Mount Vernon, to net as many shad as possible for salting, and fishmongers in colonial Philadelphia would call “Shad-oh!” to announce their recent catches. Although inland commercial harvesting of shad is mostly a thing of the past, there are still holdouts. At the annual Shad Fest in Lambertville, New Jersey (this year on April 29 and 30), there’s a demonstration of shad netting by the Lewis Fishery, which dates to 1888.

Flies and tactics
Fly-fishing for shad means getting your flies deep, as close to the bottom as possible, so most anglers use a full-sinking or sinking-tip line. As the fish move upstream, they tend to congregate below anything that interrupts the current, so your best bet is to swing flies below big rocks, bridge pilings, or sharp drop-offs. Traditional shad flies–often referred to as Shad Darts–feature bright colors, flashy materials, and plenty of weight in the form of dumbbell eyes or a heavy bead. Shad are primarily plankton feeders, although they do occasionally eat shrimps and small fish, so your goal is really to annoy them into striking.