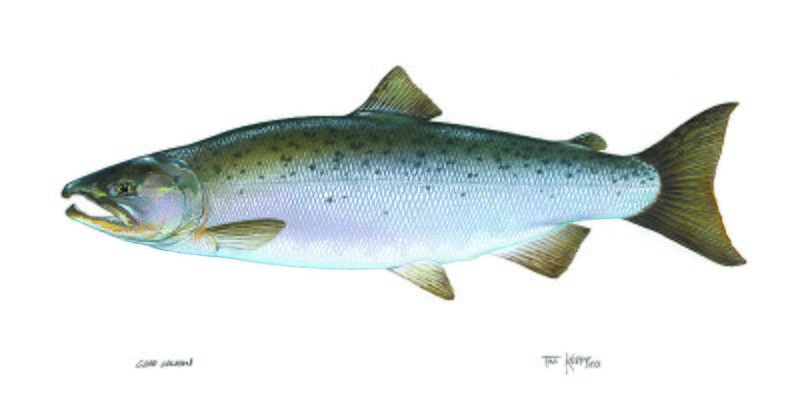 Each year, thousands of anglers travel to Alaska, British Columbia, and the Great Lakes to cast for coho salmon (Oncorhynchus kisutch)—also known as silver salmon—because of their reputation as an extraordinary game fish. The origin of the name “coho” is unknown, although it is certainly that it is derived from a Native American word for the fish.

Although cohos are the second least abundant salmon in the wild—chinooks are the least numerous—they are the most willing to take flies. Over the past decade or so, fly fishermen have discovered that, at certain times and on certain rivers, cohos will even take flies off the surface. Although they average about 8 pounds, the world record coho was a monster 33 pounds, 4 ounces, taken from New York’s Salmon River in 1989.

In the salt, cohos are truly silver (hence, the name), and unlike other species, they do not roam the open ocean, choosing instead to stay inshore. After three or four years at sea, they gather at the mouths of their natal rivers before pushing upstream to spawn. The mating run usually begins in July and runs to the middle of November. In freshwater, the sides and cheeks of spawning silvers turn red, and their backs take on dark hues. The males develop a hooked snout, known as a kype. Female silvers usually lay between 2,400 to 4,500 eggs. The fry emerge in the spring and remain in fresh water from two to four winters before venturing out to sea as smolts. 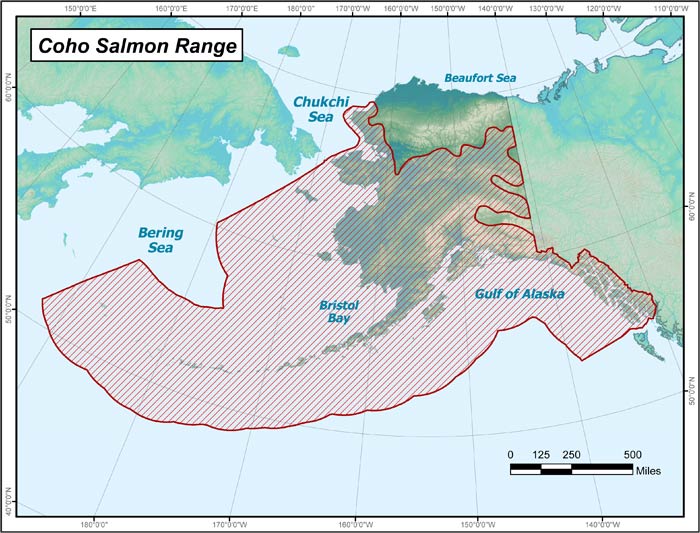 Range and Habits
Silvers inhabit both sides of the Pacific. Across the ocean, their range extends from Hokkaidō, Japan, and eastern Russian, around the Bering Sea. In North America, their traditional range stretches from Point Hope, Alaska, southward to Monterey Bay, California. Cohos were introduced to the Great Lakes in 1966, at the height of the alewife population, which offered a bountiful food source. Although there is some natural reproduction, hatchery fish still predominate in the Midwest, as well as in many other landlocked reservoirs throughout the United States.

In freshwater, the sides and cheeks of spawning silvers turn red, and their backs take on dark hues. The males develop a hooked snout, which is known as a kype. Female silvers usually lay between 2,400 to 4,500 eggs. The fry emerge in the spring and remain in freshwater from two to four winters before venturing out to sea as smolts. They remain in the ocean for 6 to 18 months and grow exceedingly fast, reaching average weights of 8 to 12 pounds. Much larger specimens, however, have been caught, including a world-record 33-pound, 4-ounce beast pulled from New York’s Salmon River.

While their numbers in Alaska are still strong, populations of silvers in the continental U.S. are steadily dropping. In Washington and Oregon, the fish are listed as threatened, and in California, they are listed as threatened or endangered, depending on the area. Several factors have contributed to their decline, but none so great as dams, which have halted many runs and prohibited large numbers of fish from reaching the spawning grounds. And this just makes the silvers much more susceptible to other pressures, such as predators, commercial fishing, mating with hatchery salmon, and stream degradation.