Like the two species to which is it closely related—Arctic char (Salvelinus alpinus) and bull trout (Salvelinus confluentus)—the Dolly Varden (Salvelinus malma) is a true char that is found throughout a wide range in the North Pacific watershed. Although they were once thought of as nuisance fish that ate the eggs of more high-profile species, dollies are now prized by fly fishermen for their aggression, their size, and their remarkable colors. In spawning season, males are arrayed in brilliant pink, green, and orange and are among the more beautiful trophies of the north.

The range of the Dolly Varden extends from Puget Sound north, around the coast of Alaska, to the McKenzie River in the Canadian arctic. In the eastern Pacific, the species inhabits waters from Japan north to the Bering Sea. Attempts have been made to introduce Dolly Varden in California, Colorado, New Mexico, and Wyoming, but none of these attempts succeeded in establishing a sustaining population. 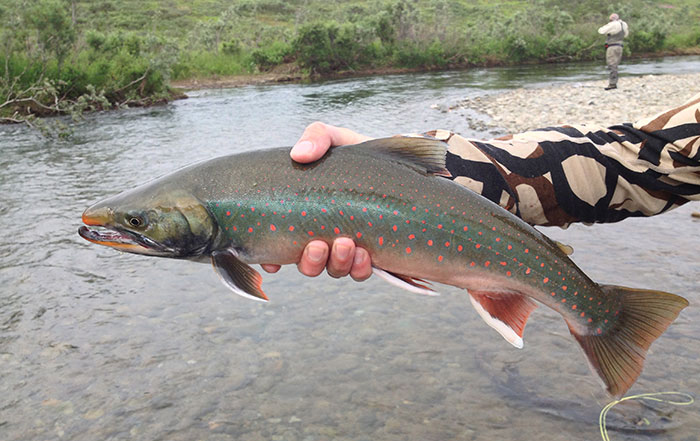 The brilliant spots of the Dolly Varden are almost surreal.
Photo by Jeremy Kehrein

In North America, biologists recognize two subspecies: the Northern Dolly Varden (S. m. malma) and the Southern Dolly Varden (S. m. lordi), with the Alaska Peninsula and the Aleutian Islands as the border between them. (In 1978, inland forms of the Dolly Varden trout were reclassified as Salvelinus confluentus, retaining the common name bull trout.) The northern form is primarily anadromous, while the southern form can be stream-resident, lake dwelling, or anadromous.

Because they are migratory, Dolly Varden can be found in a variety of habitats. In spring, they leave the large lakes where they winter and head for salt water, where they can be found in near-shore waters during summer months. There, they mingle with salmon and then follow the larger fish upstream, where the dollies can feed on salmon eggs.

Like all chars, Dolly Varden spawn in fall, returning to their natal streams as soon as they reach maturity (age 5 to 9). Post-spawning mortality is high, with as many as 50 percent dying after their first spawn and very few spawning more than twice. Young Dolly Varden spend two to four years in streams before migrating to the sea or to large lakes. They spend the rest of their lives migrating back and forth in often complicated patterns. Dollies may live up to 16 years, but specimens older than 10 years old are uncommon.

In a study released in October 2015, scientists from the University of Washington revealed that anadromous Dolly Varden exhibit a behavior never seen before. They migrate to the ocean to feed for the first few years of their lives, but once they reach a certain weight, they return to fresh water for good. The prevailing theory is that this behavior saves the fish from ocean predators. 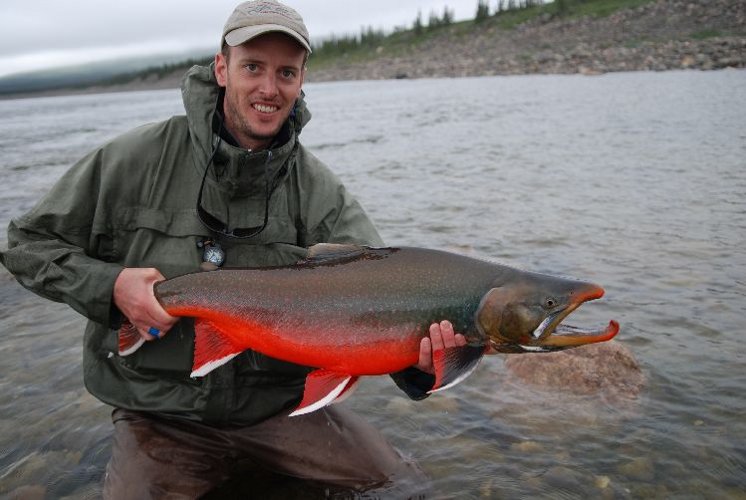 The male arctic char generally has fewer spots, but it’s nearly impossible to tell the difference by sight.
Photo by Nils Rinaldi from Lausanne, Switzerland, via Wikimedia Commons

The ranges of Dolly Varden and Arctic char overlap extensively, which means you may find both in the same region. However, distinguishing between the two species by sight is very difficult. In general, dollies have more spots and a darker background color, a less forked tail, and a fatter caudal peduncle. In males, the Arctic char will develop a less pronounced kype than a Dolly. To verify identification, it is necessary to count gill rakers, fin rays and pyloric caeca (parts of the intestines). Ultimately, however, anglers have no way of being certain which species they’ve landed in waters that contain both.

What’s in a Name?

Most people know that the Dolly Varden is named for a Dickens character, but few know the whole story. One generally accepted account (there are others) is that, in the early 1870s, a group of anglers was looking at some large trout caught from California’s McCloud River and known locally as “calico trout.” Someone said that there should be a better name for the species, whereupon a young girl of 15 or 16 suggested “Dolly Varden” after a character who wore bright dresses in Dickens’s Barnaby Rudge, which the girl had been reading. (A colorful woman’s dress named for the character was also in fashion.) Here’s the funny part: the fish the men were looking at were almost certainly bull trout and not the species we now call Dolly Varden, as the two were considered the same at the time.

As with other trout species that inhabit the same waters as Pacific salmon, there are two distinct angling strategies for chasing dollies. In spring and early summer, before the salmon arrive, anglers should focus on lake outlets and the mouths of rivers to intercept migrating fish. Once the salmon enter the rivers, dollies can be found behind pods of spawning fish, especially downstream of active redds. Although trophies in the 20-pound range have been recorded, most dollies are between 15 and 22 inches. The world record is a 20-pound, 14-ounce dolly taken from Alaska’s Wulik River in 2001.

In the spring and early summer, small streamer patterns that imitate salmon fry or smolts—such as Bob Triggs’s Chum Baby or Doug Rose’s Keta Rose—can be very productive. Once the salmon appear, egg patterns will work, but many anglers swear by a swung Egg-Sucking Leech. Late in the season, Muddler-type streamers are a good choice.