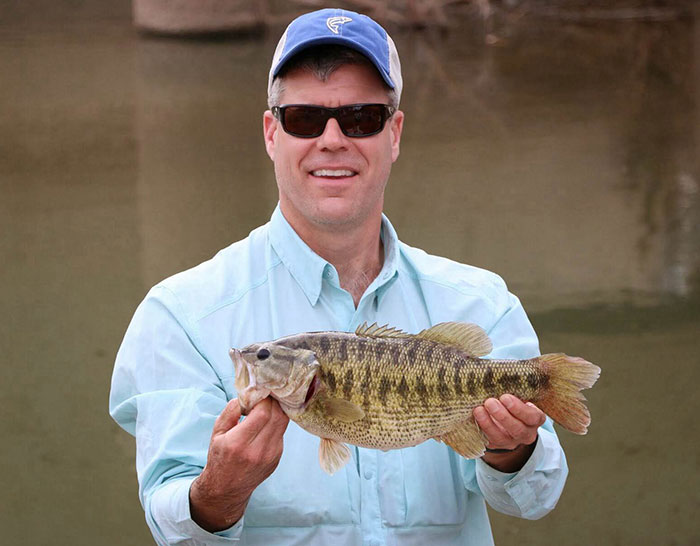 Although largemouth and smallmouth bass get all the press, Lone Star State fly fishers have a soft spot for the smaller Guadalupe bass (Micropterus treculii) , sometimes called the “Texas trout” for its propensity to live in fast-flowing rivers, its willingness to take a fly, and for the way it punches above its weight class at the end of a line. The official state fish of Texas, Guadalupes are closely related to smallmouth bass—which turns out to be one of the biggest threats to the Guadalupe’s very existence—and they are prized less for their size than for their beauty and the fact that they are natives. Fishing for these stream-born bass also takes anglers away from big lakes and population centers to some of the most beautiful waters of the Hill Country.

Range and Life History
The smallest of the black bass, topping out at about three-and-half pounds, the Guadalupe bass is found only in Texas and is specifically native to the Edwards Plateau, an ecological region of west-central part of the Lone Star State. The region is largely a grassland savannah—good cattle-grazing country—and it includes the Hill Country on its eastern border. The main rivers of the Edwards Plateau are the headwaters of the San Antonio River, the Guadalupe River above Gonzales, the Colorado River north of Austin, and portions of the Brazos River drainage. Unfortunately, habitat loss and hybridization with nonnative smallmouth bass have caused the species to disappear from parts of its original range, especially in the Brazos drainage. Although limited harvest is still legal in the majority of Guadalupe waters, most anglers practice catch-and-release fishing to help maintain good fish numbers.

There are also small, outlier populations, primarily in the lower Colorado River, and the species was introduced in the Nueces River system by the Texas Parks and Wildlife Department (TPWD) in the early 1970s. Because those fish represent a pure strain of Guadalupe bass—difficult to find elsewhere—they are protected by special regulations, and TPWD established a Guadalupe bass refuge in the Sabinal River at Lost Maples State Natural Area. Fingerlings raised from these pure-strain Guadalupes have been used to restore populations in other watersheds, as part of an aggressive program to save the species from extinction via hybridization.

Whereas largemouth bass, which are also native to Texas, prefer stillwater or slow-moving stretches of river, the Guadalupe bass have adapted to live in the cool, flowing streams of their native range. Many anglers believe that Guadalupes fight harder than Texas’s other black bass because the fish are accustomed to fight currents. Like other black basses, it eats baitfish, crayfish, and insect larvae. They are cover-oriented fish, preferring to hold around large rocks, cypress knees, deadfalls, and stumps. The male Guadalupe builds a nest for spawning in early spring, although there is sometimes a second spawning in late summer.

Habitat Reduction
Like many native species across the country, Guadalupe bass have seen their native habitat reduced through dams and pollution. The species evolved to live in fast-flowing water, and although some tailwaters create these conditions where they didn’t exits before, many dams produce lakes above and much lower or variable flows below. The population boom in the Hill Country, especially around Austin, has also led to loss of habitat, especially in smaller streams; degradation of riparian zones; and an increase of pollution from runoff. The Texas Guadalupe Bass Restoration Initiative works with landowners to fund work at the stream level, restoring riparian habitat and improving water quality.

Hybridization Hazards
The Guadalupe bass was first classified in the 1870s as a subspecies of largemouth bass, then later as a subspecies of spotted bass. It wasn’t recognized as a separate species until the 1950s, when Dr. Clark Hubbs of the University of Texas observed Guadalupes and spotted bass living together without interbreeding. Meanwhile, state biologists began stocking smallmouths in the Guadalupe’s range as a way to improve fishing, and these species began interbreeding. Unfortunately, the hybrids and smallmouths outcompeted the native bass, causing massive population declines. In some rivers, such as the Blanco, which drains into the Guadalupe, the native fish disappeared altogether. Starting in 1992, TPWD began stocking pure-strain Guadalupe bass, and is working with landowners and fly fishermen to widen the program throughout the Hill Country. 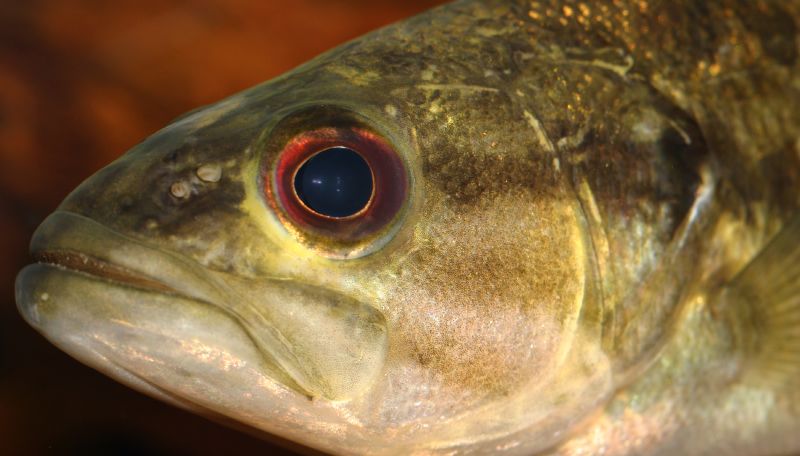 Flies and Tactics
Fly-fishing for Guadalupe bass is a lot like chasing smallmouth bass: the fish relate to structure and riffles, and you can catch them at all levels of the water column. Once hooked, they are very adept at using the current to their advantage. Guadalupe bass do not grow very large—rarely topping three pounds—and the official record is a 3.69-pound fish caught from Lake Travis in 1983. However, in March 2014, Dr. Bryan Townshend landed a 17-inch, 3.71-pound beauty on the Colorado River below Austin, and that record is pending.

Good flies for Guadalupe bass are also similar to those used for smallmouths and they include downsized largemouth patterns. Topwater fishing is the method of choice, and anglers should carry a selection of small deer-hair bugs and poppers; sliders, such as Sneaky Petes; and terrestrials, such as Dave’s Bass Hopper. For going subsurface, you can’t beat a black or olive Woolly Bugger, although crayfish patterns can also produce well.