In fly-fishing circles, the lake trout (Salvelinus namaycush) is perhaps the least respected of all the “trout” species. (It’s actually a char, of course, a close relative of brook trout, bull trout, and Dolly Varden.) Because lakers often live in extremely deep water, many anglers believe that they are a quarry best left for the level-wind-and-downrigger set. But these fish grow to astonishing proportions and do venture into the shallows in spring and fall, on the hunt for baitfish. Cruising lakers are often not at all finicky, and a well-presented streamer can produce savage strikes. Once hooked, they don’t jump or dance, but they do pull hard, go on long runs, and produce head shakes that you can feel all the way into the rod’s cork grip.

Range and Species History
Lake trout—known variously as lakers, mackinaw, togue, and gray trout—are native to coldwater lakes northern North America, mostly in Canada, but also in Alaska, the Great Lakes region, and the northeastern U.S. The fish inhabit shallow lakes in the northern part of their range and deep lakes farther south. Occasionally, they can be found in rivers, usually those that connect suitable lakes. The species has also been widely introduced to lakes throughout the continent and the world, including Europe, Asia, and South America. 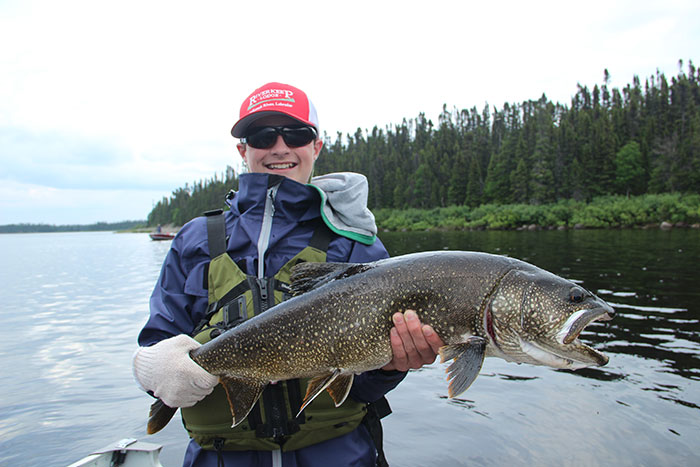 Lake trout are generally slow-growing, but long-lived, which means that populations are susceptible to overfishing. They reach sexual maturity at 6 or 7 years, commonly live in excess of 25 years, and have been recorded up to 60 years old. The species survives only in cold, well-oxygenated lakes, and when water temperatures rise in summer, the fish head for deep water—sometimes as deep as 200 feet. They are predominately piscivorous, feeding on smaller fish, but where such a forage base is not available, they will feed on plankton. Such planktivorous populations are more abundant, slower-growing, and mature at a smaller size.

Lake trout spawn in fall, usually over rocky shoals that have been cleared of sand and silt by wave action. Males usually arrive first to further clean the spawning site, and females broadcast eggs across the exposed gravel. The eggs fall between the gravel, which protects them from predators, and hatching occurs in late winter or spring. Young fish immediately head for the protection of deep water.

Bucket-Biology Disaster
Lake trout are relatively easy to stock in appropriate waters, but that doesn’t mean it’s always a good idea. Sometime in the 1980s, some unknown ”bucket biologist” introduced the species to Yellowstone Lake, and they began feeding on the native Yellowstone cutthroats, which are a vital part of the food chain in the region, supporting populations of bears, eagles, and countless other animals. Through the early 2000s, cutthroat populations plummeted to perhaps just 10 percent of their historic numbers, but aggressive lake-trout-eradication measures—including gill nets, electroshocking, and recreational angling—have recently turned the tide. Tributaries of the lake that had suffered complete collapse of their cutthroat populations are now seeing more fish return, and angler creel surveys show that fishing throughout the system has improved, as well. 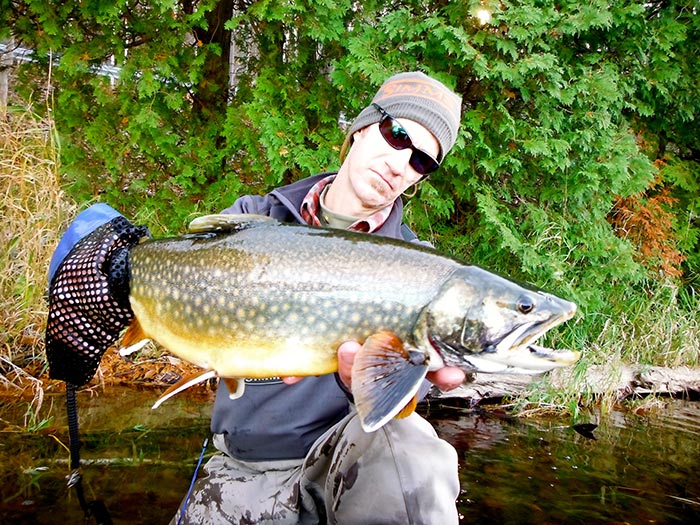 Hotshot Hybrids
Female lake trout and male brook trout do interbreed in the wild to create splake (speckled + lake), but most occurrences of the hybrid are the result of stocking programs. Game managers prize splake because they are hardy, easy to raise, and grow faster than either of their parent species. The brookinaw, a hybrid of a male laker trout and female brook trout, is more difficult to raise in a hatchery setting. Where habitat is marginal for brook trout, splake offer a better return for anglers, and because the hybrids are sterile, they don’t pose a risk of spreading to native-trout waters. Splake are available to fly fishers especially fall, when they come into the shallows to feed. There is also a hybrid, known as a “humper lake trout,” that occurs between the common lake trout and the siscowet subspecies.

Flies & Tactics
The best times to fish for lake trout are spring and fall, when water temperatures are in the low fifties or cooler. The fish often cruise around rocky points, sunken reefs, narrows, and wherever tributaries enter into the lake. Because lake-trout waters are usually quite clear, sight-fishing can be quite good in 5- to 20-foot-deep water. Use a 7- to 9-weight rod and a fly line with a fast-sinking tip to get the fly down to the fish. If it doesn’t offend your sensibilities, trolling with a fly (where legal) is a good way to find the fish. The world-record lake trout weight 72 pounds, but the ones you catch near shore are usually in to the 3- to 10-pound range. But you never know. . . . 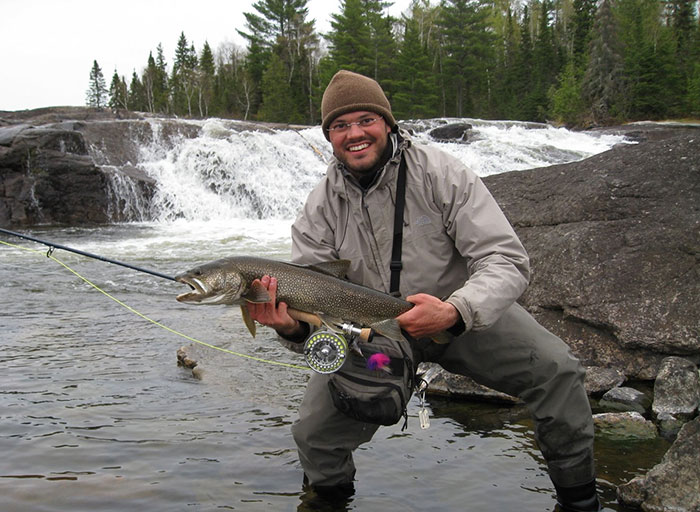 Large baitfish patterns are the weapons of choice for anglers chasing lake trout. It’s hard to go wrong with a Clouser Minnow, Deceiver, or Whistler in sizes up to 3/0, although any large, flashy pattern will probably do the trick. There is some disagreement over the use of Strip Leeches: some anglers swear by them, while others claim that the fish short-strike such long flies.