Illustration by Duane Raver via USFWS

Among the more widely distributed game fish in North America, and now around the world, the largemouth bass is prized for its aggressive feeding habits and violent strikes. A big bass blowing up the water around a popper chugging across flat water is a thrilling sight, and the ensuing battle often includes several acrobatic leaps. Although fly-fishing for bass has always been popular in parts of the country, in recent years there’s been a resurgence of interest—as evidenced by new, high-tech tackle; the rise of fly-fishing-only bass tournaments; and even several films dedicated to chasing largemouths with the long rod.

The Money Fish
The largest members of the sunfish family, largemouths are divided into two subspecies—northern (Micropterus salmoides salmoides) and Florida (Micropterus salmoides floridanus). Although the two are virtually identical to the naked eye, the Florida strain grows much larger. One famous Florida-strain fish, nicknamed Dottie, measured 29.5 inches long and weighed just over 25 pounds when she was foul-hooked and landed in 2006 on California’s Dixon Lake. No one ever caught her legally, and she was found dead on the surface later that year.

The hunt for a world-record largemouth—which many anglers call “The Million Dollar Fish” because of the endorsement money the lucky angler would supposedly earn—has been ongoing since George Perry caught (and ate!) a 22-pound, 4-ounce fish from Georgia’s Montgomery Lake in 1932. The world record for a fly-caught fish belongs to Larry Kurosaki, who landed a 16-pound, 12-ounce beast on California’s Castaic Lagoon in 2009. 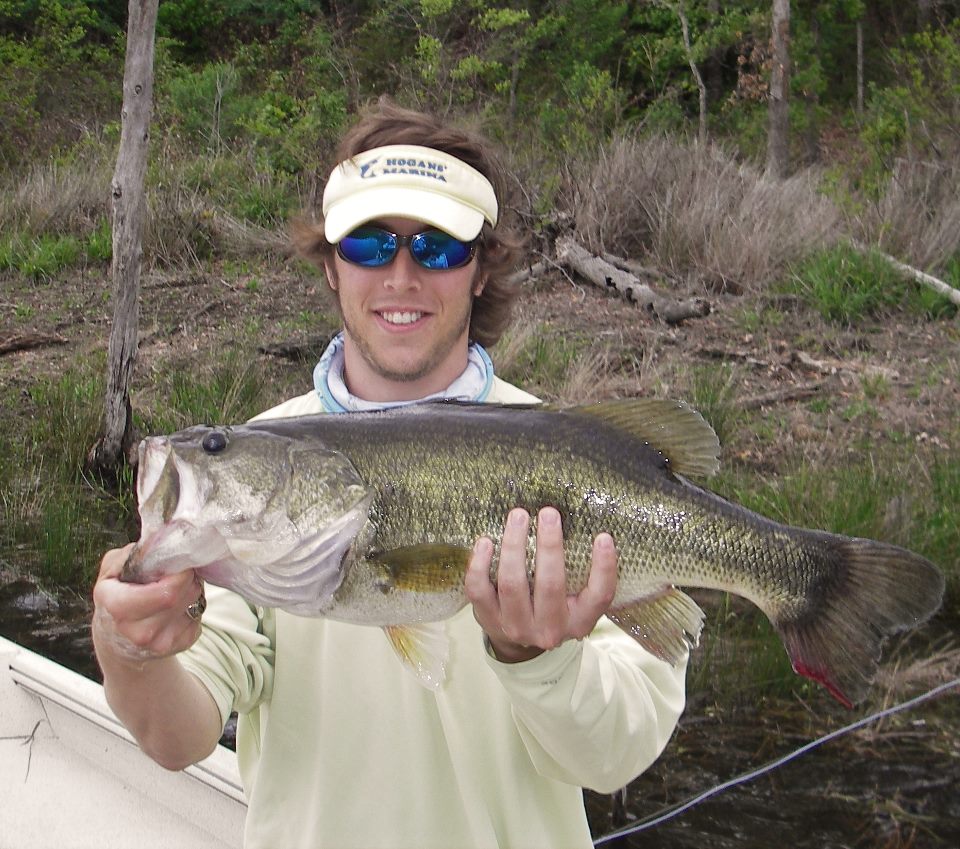 A huge bass on the fly is a real accomplishment.
Photo by Rob Woodruff

Range and Habits
The original range of the largemouth bass was from the Mississippi basin east and stretched north to the Canadian border, but bass have been stocked in lakes and rivers in 49 states. (Only Alaska is without.) The trophy qualities of the Florida strain has led fisheries managers to introduce subspecies from coast-to-coast, and the giant fish regularly caught from impoundments in Texas, California, and Northern Mexico can trace their roots directly to the SunshineState. Largemouths have also been exported to countries such as South Africa, Europe, Guam, Japan, Lebanon, New Zealand, and the Philippines.

One of the things that makes largemouths easy to stock is that they can live in a wide array of habitats, including small creeks, swamps, and even estuaries. Because they prefer warm water—up to about 92 degrees—they generally stay near the surface, which makes them more available to anglers. Low levels of dissolved oxygen in very warm water can cause fish kills, and in the northern end of their range, bass can be stressed by a similar situation in frozen lakes.

Depending on the body of water, the fish can hug the shoreline, congregate around structure, or (less commonly) even school in open water. In general, you’ll find largemouths around weedbeds, structures or debris, or irregularities in a lake or river bottom. They prefer the shade of trees, docks, lily pads, and logs, from which they can ambush prey. 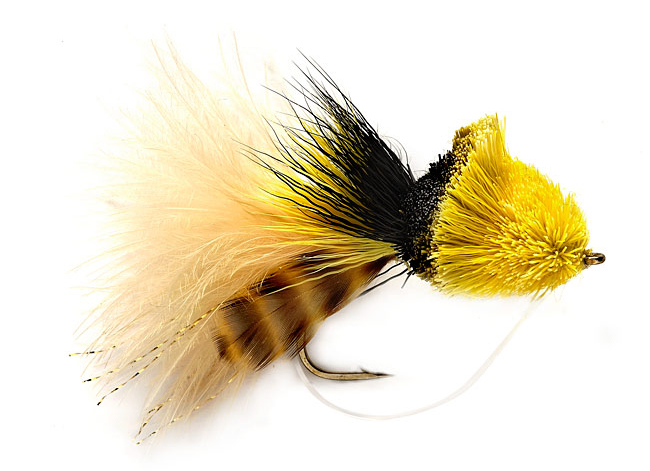 The Dahlberg Diver has been bringing bass to the surface for decades.
Photo via orvis.com

Flies
Naturalist William Bartram described Florida residents in the 1760s catching largemouths (which he called “trout”) by dragging across the water a fist-size “bob”—made from three hooks, the white hair from a deer’s tail, colored feathers, and “shreds of a red garter”—using a 10-plus-foot pole.  Fly tiers later refined the concept to create poppers made from cork, balsa wood, and spun deer hair. The number of flies designed specifically for largemouths has grown exponentially in the last decade, and anglers can choose from among dozens poppers, sliders, divers, baitfish, crayfish, and worm patterns. The advent of synthetic materials has even allowed tiers to create facsimiles of many popular lures, such as spinnerbaits and rubber worms. But you can still hardly go wrong with a Tap’s Bug, Dahlberg Diver, or a trusty Woolly Bugger.