The smallest of the Pacific salmon, “humpies” are often looked down upon, yet they provide great sporting opportunities for fly fishers.

In the angling community, the pink salmon (Oncorhyncus gorbuscha) is not generally held in the same high esteem as its cousins, the Chinook, coho, and sockeye. However, the sheer numbers of pinks that swim up coastal rivers—from Puget Sound to northern Alaska and throughout the Great Lakes—means that they offer fly fishers the most shots at a Pacific salmon. Those anglers who love the often-aggressive humpies look forward to a “pink year,” when rivers teem with salmon eager to strike a flashy fly.

Range and Life History
The pink salmon is the most abundant of all the Pacific salmons, with annual returns numbering in the tens of millions. Pinks also have the shortest life span of any Pacific salmon, spending less than two years in the ocean before returning to their natal streams. A fascinating result of this cycle is that there are two distinct populations: those that spawn during odd-numbered years and those that run during even-numbered years. The two populations do not interbreed or intermingle in the ocean. Some watersheds host pink-salmon runs every year, with alternating distinct populations, while other river systems see runs only every other year. Anglers in these latter regions will often distinguish between “pink years” and “non-pink years.”

The range of the pink salmon extends from the Sacramento River watershed in California, north to the Mackenzie River in the Canadian arctic. On the Asian side of the Pacific, the species is found from Korea to Siberia.

In the mid 1950s, pink salmon were introduced to the Great Lakes accidentally and established spawning populations. There are various accounts explaining how the fish made it from a hatchery to Lake Superior, but by 1979 it had spread throughout the Great Lakes system and is now the only completely self-sustaining Pacific salmon population in the region. In the first two decades on the 20th century, pink-salmon fry were stocked in Maine and Maryland, and these populations survived into the 1970s. From the 50s through the 70s, pinks were stocked on Russia’s Kola peninsula and in many northern European countries. In August 2015, several pinks were caught along the north coast of England, but no one knows where they came from.

Pink salmon generally run up rivers between late June and mid-October and start making redds less than 40 miles from the ocean, although they travel farther in some large rivers. After young salmon emerge from the gravel, they head immediately to the ocean, where they school in estuaries before heading to deeper water, where they spend about a year before returning to spawn.

What’s in a Name?
Pink salmon are known as “humpies” because of the distinct hump that male salmon develop after they enter fresh water. In fact, male pinks undergo a remarkable transformation throughout their life cycle. They are bright silver, with no markings, when they head to the sea. In salt water, they remain silvery, but add a bluish green back, as well as black spots on their backs and caudal fins. Upon entering fresh water, males begin to develop a very dark grayish green back, a pinkish stripe along the sides, and a bright white belly. The large hump appears between the head and the dorsal fin and a pronounced kype gives the fish a menacing appearance. Female pink salmon are less dramatic-looking, with an olive green back, white belly, and dusky bars or patches that can vary from lavender to dark gold. 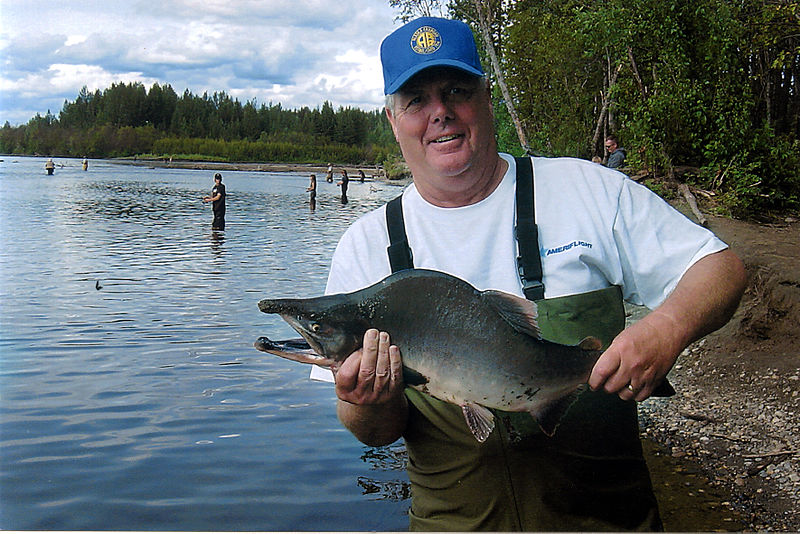 Humpies can be very aggressive and fight hard, which is why many fly fishers enjoy chasing the species.
Photo by Jack Roberts, U.S. Fish and Wildlife Service

Tactics and Flies
Pink salmon average between 3 and 6 pounds throughout their range, but much bigger fish are not unheard of. The world-record humpy, which tipped the scales at 14 pounds 13 ounces, was landed in 2001 on Washington’s Skykomish River. Puget Sound pinks often congregate along beaches adjacent to river mouths, preparing to spawn. In rivers, look for fish in resting pools and where tributaries enter the main stem. Once you’ve found the fish, you’ll rarely have trouble getting them to bite.

The species’ diminutive size means that you can use the same 6- or 7-weight rod you use for bass and big trout, and because humpies generally hold deep, you’ll need a sinking-tip line. As with many Pacific salmon, pink is a preferred color when it comes to fly patterns. Clouser Minnows, Marabou Jigs, and Flash Flies will usually get the job done.