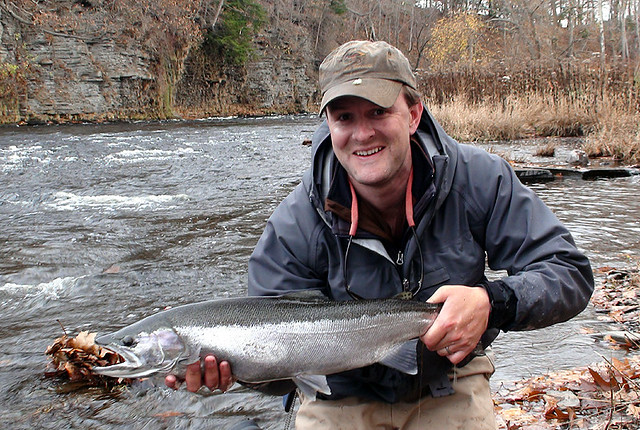 The Great Lakes fishery is incredibly prolific, though it is sometimes derided as “artificial” by those
in the Pacific Northwest because it is outside the steelhead’s native range.
Photo courtesy Scott McEnaney

[Editor’s Note: With steelhead season coming into full swing, it seemed a good time to reacquaint folks with the species in all its glory.]

Anglers throughout the Pacific Northwest and the Great Lakes region have developed distinct fly-fishing cultures around fall and winter steelhead runs—some anglers dedicated to swinging wet flies, others to nymphing below an indicator, and the most “out there” group fixated on skating dry flies. Northwestern steelheaders pride themselves on their single-minded commitment to the pursuit, putting in long hours of fruitless casting and enduring cold, rainy conditions. The payoff for all this time and effort is “the tug”: the rush of an explosive strike followed by scorching runs and acrobatic leaps, hopefully culminating in bringing a double-digit fish to hand.

Summer vs. Winter
Steelhead are often identified as either summer-run or winter-run fish, reflecting a biological oddity in the species’ behavior. Summer-run steelhead, which enter rivers between May and October, are actually sexually immature when they leave the ocean, which means they continue to develop in fresh water. These are generally the populations that travel deep inland to spawn. Winter-run fish are sexually mature when they head upstream and usually have a shorter trip to their spawning grounds. All steelhead spawn from late winter through spring, but the timing of the runs varies widely, and sometimes summer-run and winter-run fish overlap.

Range and Habits
Although they are not genetically different from rainbow trout, steelhead (Oncorhynchus mykiss) represent a completely different life history. Born in headwater streams, they migrate to the ocean or large lakes, returning after two or three years to spawn. This is a huge generalization, though, because there are many variations on this model, with observable differences from watershed to watershed.

The original range of steelhead stretched from Mexico’s Baja peninsula north to the Alaska Peninsula, with a lighter distribution on the eastern (Asian) side of the Pacific. Unfortunately, the past several decades have seen a marked decline in steelhead numbers due to a variety of factors. Among the manmade causes are dams, water diversion for irrigation, changing of natural flow regimes, destruction of spawning habitat, increased water temperatures, and competition from hatchery fish. Of the 15 distinct population segments on the West Coast of the U.S., the National Marine Fisheries Service lists one as “endangered,” nine as “threatened” and one as a “species of concern.”

Steelhead were introduced to the Great Lakes as early as 1876, when rainbows from California’s McCloud River and Campbell’s Creek were released in the Au Sable river of northern Michigan, but it was the modern stocking programs of the 1960s that are responsible for today’s fantastic runs in rivers throughout the Great Lakes system. Today, large hatchery operations supplement wild reproduction to create fisheries much more prolific than those in the steelhead’s native range.

Coldwater Flies
Steelhead flies run the gamut from the traditional to the obscene, and there are specific patterns designed for certain times of year and water conditions. Feather- and hairwing wet flies that resemble Atlantic salmon patterns—such as the Green Butt Skunk, Polar Shrimp, and Silver Hilton—dominate the classic category. Modern tube flies, such as the Popsicle, feature garish fluorescent marabou and flash. Great Lakes anglers focus more on egg patterns and nymphs, with only a few diehards swinging traditional wets. Skating patterns range from monstrosities, such as Bombers and Waller Walkers, to daintier caddisfly imitations. 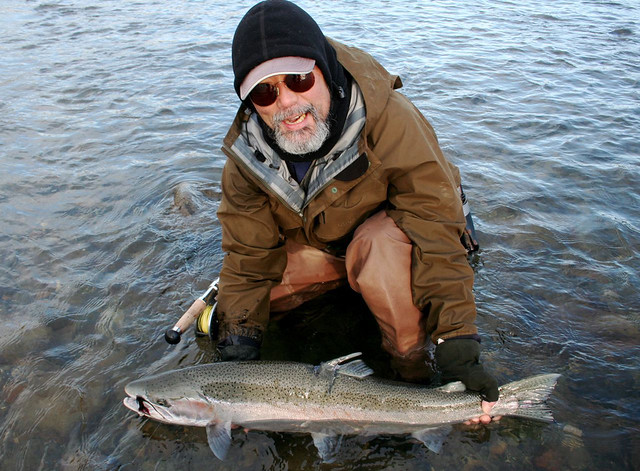