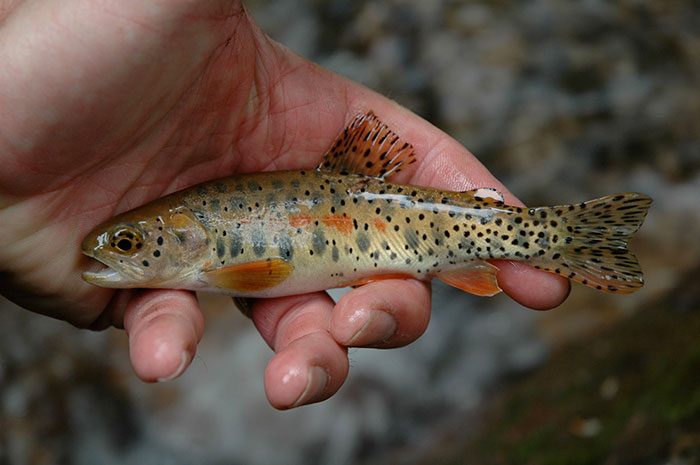 Although the greenback cutthroat trout Oncorhynchus clarki stomias has been the focus of conservation efforts for more than half a century—starting when the once-lost species was “rediscovered” in a remote part of Rocky Mountain National Park—a series of genetic studies in the 2000’s produced some blockbuster findings that threw all previous work into question. It turns out that many of the fish that both state biologists and anglers had considered greenbacks were, in fact, not greenbacks at all. As a result, many fishermen who had added the species to their life lists had to cross it off. Luckily, over the past decade considerable progress has been made to restore greenbacks from the last remaining pure population in Bear Creek to their native range in the South Platte Basin.

We owe the modern existence of pure-strain greenbacks to an unlikely source: an entrepreneurial homesteader named Joseph C. Jones. In 1873, a trail to the top of Pike’s Peak was constructed along Bear Creek, and Jones established a homestead there. Since the hike to the summit took two days, Jones thought he would build a hotel and restaurant to cater to the travelers. Researchers believe that Jones stocked the pure greenbacks in Bear Creek to provide recreation and food for his guests, although where he got the trout remains a mystery. Because the upper part of the creek is separated from its lower reaches by a barrier, the greenbacks were protected from hybridization and competition from non-native trout and were able to survive, undisturbed for the next 130 years. These fish are now the genetic source of all future populations.

Plans for the Future

When the trout of Bear Creek were identified as the only known population of greenbacks, efforts to protect and restore the species kicked in quickly. In 2006, Colorado Parks and Wildlife closed Bear Creek to fishing, and bans on camping and fires soon followed. A multi-phase watershed restoration project in Bear Creek is nearly complete, and has included re-routing of a popular OHV trail and considerable measures to decrease sedimentation in the stream.  In 2008, about 10 percent of the creek’s trout were moved to a state hatchery in Salida to start a brood stock and to serve as a backup if disaster struck Bear Creek. On August 8, 2014, the first release of hatchery-reared, genetically pure greenbacks occurred at Zimmerman Lake, west of Fort Collins, which had been rendered fishless in anticipation of the stocking. Eggs have been collected annually from Zimmerman Lake, starting in 2016.  This wild brood source has proven critical to recovery efforts, in addition to the hatchery brood source maintained at the Leadville National Fish Hatchery.  Populations have been established in two small streams in Clear Creek County through eradication of non-native trout followed by three consecutive years of stocking.  Biologists anticipate these populations will become self-sustaining in the near future.  Additionally, a series of two alpine lakes and their outlet stream (Square Top Lakes and Duck Creek) should be ready for stocking with pure greenbacks in the coming years.  The goal is to establish robust populations throughout the South Platte Basin.

Plans for the Future

With small populations now secured in three waters (and a fourth on the way) within the Greenback’s native range, biologists have shifted their focus to the creation of large metapopulations that include longer stream lengths and tributaries.  These longer-term projects have required the construction of fish barriers and are at various stages of systematic eradication of non-native trout.  When these projects are completed, Greenbacks will be restored to 14 miles of stream in George and Cornelius Creeks, 9 miles of stream in Rock and Black Canyon Creeks, and 39 miles of stream and a 242 acre reservoir in the headwaters of the Poudre River.  Nonetheless, biologist still seek opportunities to restore the species to smaller stream segments over the shorter term.

According to the latest thinking, the original range of the greenback cutthroat trout was limited to the South Platte Basin of eastern Colorado. Previously, it was believed that the species also lived in the Arkansas River drainage, but the new genetic evidence suggests otherwise. Writing in 1891, David Starr Jordan was the first to use the name “greenback” to describe the species, which he also referred to as the “trout of the Platte.”

A combination of habitat loss, pollution, and hybridization caused a rapid decline in the greenback population throughout the late 1800s and into the next century. By 1937, the native greenback cutthroat was declared extinct.

Twenty years later, fish believed to be pure-strain greenbacks were discovered in remote waters of Rocky Mountain National Park, but there were very few of them. When the Endangered Species Act was passed, in 1973, the greenback was on the first-ever list of endangered species. As more populations were identified and established in the ’70s, the species’ status was downgraded to “threatened”—which meant that anglers could legally catch them—and state and federal agencies began restoring them to more waters by raising these supposedly pure greenbacks in hatcheries and then stocking them. By the late 90s, the fish could be found in 62 different locations and were ready to be de-listed. . .until science interfered.

In 1999, genetic studies revealed that the fish being used as brood stock were not, in fact, pure greenbacks. So the biologists were forced to start over, using non-hybridized cutthroats believed to be greenbacks. But in 2007, research at the University of Colorado-Boulder using genetic techniques that were new to the conservation world showed that most of the re-stocked populations, while pure, were lineages native to other parts of the state, The most recent genetic study involved state of the art techniques to extract DNA from 130 year old fish collections housed in museums, and sleuthing of historical fish stocking records.  This study showed that the true greenbacks lived in just one four-mile stretch of Bear Creek south of Pike’s Peak and there were only about 700 of them left. Because of their singular appearance, these fish had been deemed too “weird” to be used as brood stock in earlier efforts. Their weirdness turned out to be a sign of uniqueness.

Currently, greenback cutthroat trout are still listed as “threatened,” and pretty much everyone involved in Colorado would like to see them stay that way. If the species were to be declared “endangered,” many different kinds of outdoor recreation would be affected. A change in status for the greenback would set limits on state management and restrictions on angling. To avoid that, the greenback recovery team aims to show that populations are on an upward trajectory, so “endangered” status is unnecessary. Establishing populations in more waters and continuing to protect the Bear Creek population is in everyone’s best interest.

Special thanks to Doug Krieger and the Greenback Recovery Team of Colorado Parks and Wildlife for his help with this article. Click here to see Joe Tomelleri’s beautiful illustration of a Bear Creek greenback.