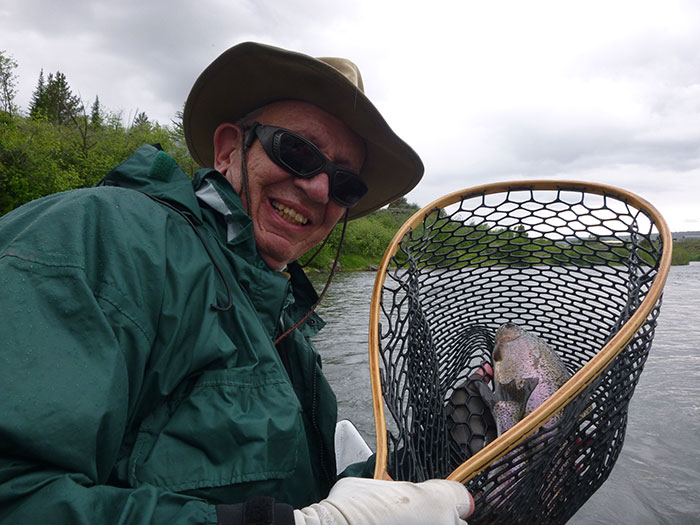 Paul Stauffer poses with a pair of rainbows caught while he was holding onto his Helios 2.
Photo by Randall Stauffer

[Editor’s note: This story comes to us via Paul Stauffer, the guru of the Salt River and spring creeks in Star Valley, Wyoming. Orvis chairman or the board Leigh Perkins says of him, “Paul has taught me more about spring creek fly fishing than anyone else since Joe Brooks.” Let’s see if anyone can imitate this particular trick.]

I have a good story for you involving the Orvis Helios 2 rod you gave me a couple of years ago. My grandson, Randall, and I floated the Warm River to Ashton stretch of the Henry’s Fork a week ago, hoping to hit the salmonfly hatch right. The fishing was just so-so, as the fish were pretty stuffed with the big nymphs and big bugs. But late in the afternoon, when we were getting no more looks at our dry flies, I switched to a nymph rig and within 15 minutes hooked and landed a fat 17-inch rainbow. Randall, who was rowing, anchored the boat midstream because we thought we would get a photo, but as he was about to take the picture, my Orvis Helios 2, which was lying across the apron on the bow of the driftboat, disappeared over the edge into the river.

Randall pulled up the anchor and did a good job of rowing to keep us close to the rod. Sometimes we could see it, and sometimes it disappeared, as the water wasn’t too clear. Suddenly, a smaller rainbow, about 13 inches, started leaping from the river close to the boat. I guessed that it had taken one of the flies attached to the submerged rod. We soon got to a spot where I could see and retrieve the rod, and the rainbow was still on the end of the line. In a minute, I had both fish in the net at the same time.

That proves that Orvis rods can catch fish all by themselves–just throw them in the river and pick them up downstream with a fish on. We laughed all the way to the take-out.