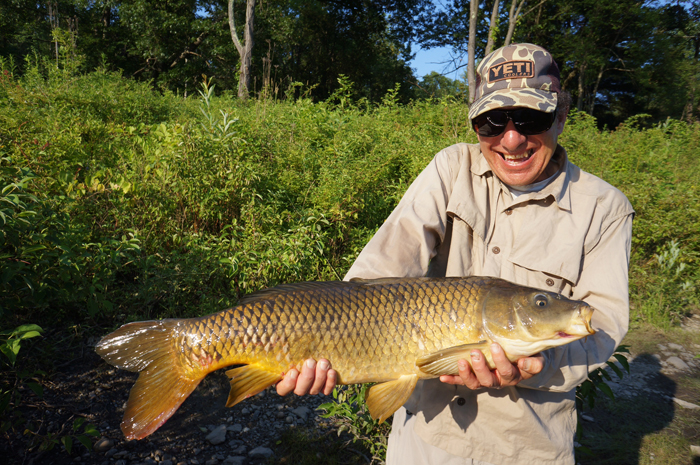 Kaufmann’s trophy from the “Carp Locker” put a huge smile on his face.
Photo by Shawn Combs

John Kaufmann is absolute hell on fly tackle. He’s a fly rod’s worst nightmare, but a fly shop’s favorite patron. Every spring, as he chases stripers up and down Cape Cod with reckless abandon, he snaps rods, explodes reels, and puts fly lines through what some might consider cruel and unusual punishment.

He does this not because he’s completely obsessed with catching stripers (although he is) but also because he’s an Orvis field tester—one of the lucky few who takes a prototype piece of equipment, fishes it as hard as humanly possible, and then starts the process all over again with the next new innovation.

Keep this in mind: John Kaufmann is not a guide. He’s not an outfitter. He’s simply a semi-retired fly fisherman from Saratoga Springs, New York, who just so happens to do things to equipment that no one at Orvis has ever seen before. It started when he was just a customer, but everything changed with a diplomatic letter.

“I was fishing an estuary that has a ferocious running tide,” Kaufmann explains. “The tide just rips through there. We anchor and I was using an Orvis reel and hooked a large striped bass. It was a big fish, and when it started running, it went so fast that it tore the spindle out of the housing. So I sent the reel to the attention of Tom Rosenbauer. I wrote, ‘I really admire the equipment I was using, but clearly this reel has failed. I figured you guys would want to know about this.’”

In the letter, Kaufmann also detailed numerous experiences he’s had with fly lines splitting in half, rods shattering, and various other misadventures. It got the team at Orvis headquarters buzzing.

“About a week later, my cell phone rings and it’s Tom Rosenbauer, calling me. He said he read my letter, that he was impressed with the stress I put on Orvis equipment, and that he thought I’d be a great field tester. Then Steve Hemkens sent me the prototype for the Mirage. He told me, ‘Don’t wash it, don’t do anything to it. Just fish it. Abuse it as much as you can, because we want to see what happens.’ That reel? I still use that reel. It’s still one of my main fly reels.”

Tall and thin, Kaufmann bears a striking resemblance to Joe Namath. He’s an outdoorsman at heart and in practice; he fishes the Cape for stripers, the Catskills for trout, and spends his fall in the Adirondacks with his 10-month old English setter, Kate. When he speaks about fishing, he does so deliberately and passionately, interweaving reverent stories about his mentors Norris Johns and Ross Marigold with jaw-dropping tales of his early ’80s trips to the Henry’s Fork. His love for the sport began at an early age, and has only grown with time.

“When I was about 13 years old—and I’m now 67—I bought this glass Wright and McGill fly rod and my parents sent me on a 7-week canoe trip through the Allagash Wilderness,” he says. “I just went out there with a fly rod, and I developed all these bad fly-casting habits. But there were a lot of brook trout and, I managed to catch some fish. You can imagine how exciting that was.”

While, as he says, “sex and education” got in the way of fishing during much of his late teens and early twenties, he eventually moved close to the Battenkill and joined the Clearwater chapter of Trout Unlimited in the Albany area. There, he met plenty of anglers and really began to learn how to fish. But it wasn’t until he started taking trips out West that he became a full-fledged devotee.

“I used to fish the Henry’s Fork in the 1980s, and that was just awesome,” he says. “It had fantastic hatches and big rainbows. That was just the most fantastic experience. Those memories are with me now. I also learned to nymph on the Madison River, before whirling disease. I met a guy named Ross Marigold; he was a very generous friend and I fished a lot with him. We had some amazing nymph fishing. We used to catch fish after fish, and this was a time when very few people used to fish the Madison. I would see almost nobody. Ross wasn’t a full-time guide, but it seemed like he guided just enough to cover IRS requirements. I miss him.”

Of course, living in the Northeast makes it nearly impossible to ignore striped bass. After spending time at his wife’s family’s house in Wellfleet, Massachusetts, Kaufmann was afflicted with one more species to chase.

“I didn’t know what I was doing and I caught very few fish for years,” he says. “I would go out to these beaches and cast into that vast void and catch very few fish. I heard that Martha’s Vineyard was good, so I went out there one June and stayed at a campground. As it turned out, there’s an outdoor club on the Vineyard, and every June they sponsor a fly-fishing tournament. They fish until 2 a.m., and have a banquet the next day. I knew nothing about this; I was just staying at the same campground. I met a man named Norris Johns, who grew up on the Kennebec River and was a Union Elevator repair guy who picked up fly fishing. He mentored me like Ross did and taught me how to find striped bass, which turned out not to be terribly difficult, especially when you have a small boat.”

Thus, a striped-bass-hunting monster was born, and his fly-fishing equipment started tearing to shreds. Needless to say, his recruitment into the field-testing program has been a boon to his fishing, as well as the Orvis product-development side of things. His most recent task: give the Helios 2 rods everything they can handle.

“It’s been a good experience,” he says. “I really put those fly rods through it. You break rods in boats all the time—people step on them, people hit antennas, and the rods break on fish. I had all kinds of people using the Helios 2 prototype, but the rods stood up. I do think the final rod was a superior rod to the ones I was testing, and I like to think my feedback was taken seriously.”

Recently, Kaufmann and Orvis product specialist Shawn Combs went out fishing for carp, a first for Kaufmann. Combs took him to a place known throughout the Orvis headquarters as “The Carp Locker.”

“That was really a kick!” Kaufmann says. “There were a lot of big carp in that magical place. It’s pretty challenging getting them to eat, and I love challenges. I’ve been back a few times since.”

4 thoughts on “Fish Story: From Customer to Field Tester”