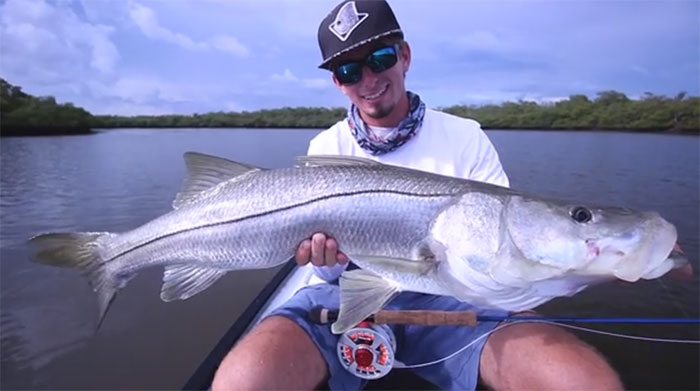 Catching a really large snook is a bucket-list item for many saltwater anglers.
Photo via Livit Films

The most abundant of the twelve snook species, the common snook (Centropomus undecimalis) is prized by anglers for its aggressive strikes and go-for-broke fighting style. You can target snook in the surf on open beaches or in the gnarliest tangles of mangroves in tight tidal creeks, and they offer fly fishers a variety of challenges. Just because snook are voracious predators doesn’t mean they are easy to catch, though, as snook can develop “lockjaw”—depending on tide, weather or their own whims—that leaves anglers frustrated. Snook fishing involves a lot of hunting and a fair amount of luck, which is why landing a big snook is considered a true feat.

Multiple species
Snook belong to the family Centropomidae, which contains 12 closely related species that inhabit both the Atlantic and the Pacific. The largest is thought to be the black snook, which is found only on the Pacific coast of Costa Rica and has the largest IGFA record, at 57 pounds, 12 ounces. Florida is home to five of these species: common snook, small-scaled fat snook, large-scaled fat snook,  tarpon snook, and swordspine snook.  It takes a pretty good eye to tell some of the species apart, and location of catch is often the best indicator. The snook on Florida’s east coast are a slightly different strain than those on the Gulf coast: the Atlantic fish live longer (up to 15 years, as compared to 12 years for Gulf fish) and tend to be larger. The Florida Fish & Wildlife Commission creates separate regulations for the two regions.

Range & Biology
Common snook inhabit the coastline of the western Atlantic, from Florida south to Rio de Janiero, Brazil, and throughout the Caribbean and Gulf of Mexico. Although specimens have been found as far north as New York, snook are not considered abundant north of Cape Canaveral, Florida. There aren’t many between the Florida panhandle and Galveston, Texas, but they are plentiful along the rest of the Gulf Coast. They are prized as a food fish in much of their range.

True inshore and nearshore fish, common snook inhabit a wide variety of environments, including mangrove forests, beaches, river estuaries, nearshore reefs,  and salt marshes. They often travel up rivers into freshwater, but only short distances. It has been said that when they are in salt water, snook are never far from freshwater, and vice versa. Juvenile snook are mostly restricted to riverine environments. 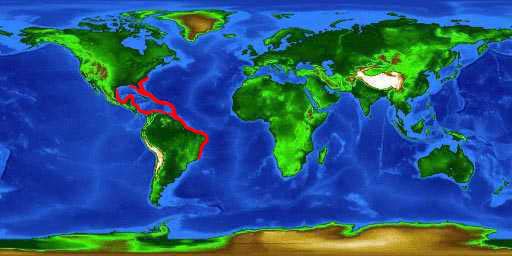 One oddity of the common snook is that it is a “protandric hermaphrodite,” meaning that it changes from male to female after maturation. This means that most large snook are female because the chances that a snook is female increase with size and age.

Snook spawn on the new and full moons from May to September. The fish gather in passes and other places of high current that will take the eggs seaward. The smaller males bump the females, causing them to release the eggs, which are then fertilized. During the span, the fish’s fins turn a bright yellow. When the eggs hatch, the tiny fish return to inshore waters, finding their way to small creeks and marshes where they can better avoid their many predators.

Winterkill
As a tropical and subtropical species, snook are quite temperature sensitive, and once the water dips below 55 degrees, bad things start to happen. The winter of 2010, in which such temperatures persisted for two full weeks, was a disaster for Florida’s west-coast snook population, with up to 1 million fish killed. In response, the Florida Fish and Wildlife Commission suspended the recreational harvest of snook along the west coast. (Florida ended commercial harvest of the species in 1959.) Anglers and biologists also discovered that the cold snap affected even surviving fish, causing them to change habitats and home waters. In the summer of 2013, it was determined that stocks had recovered enough that harvesting could begin again. Cold kills continue to happen on a less grand scale. For example, last December,  several hundred fish died in a series of interconnected lakes in Indian River Shores. 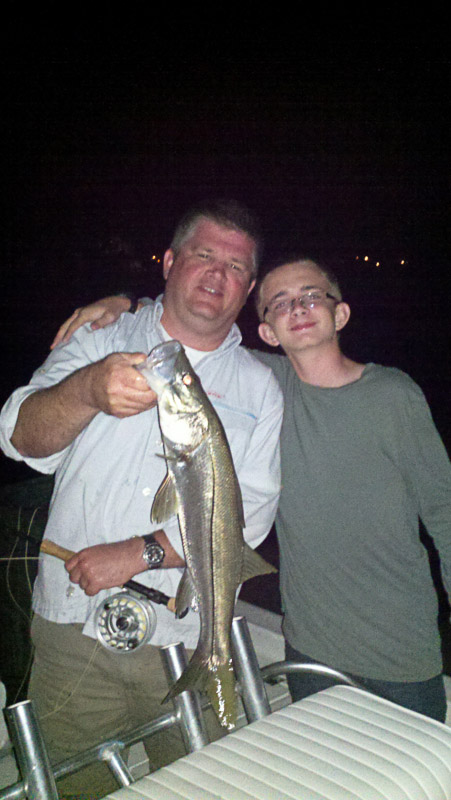 Tactics and Flies
There are many ways to target snook, from casting under dock lights at night, to sight-fishing along beaches at dusk and dawn, to shooting flies under vegetation and into mangrove roots. They feed most actively at night, but any period of low light can be productive. The IGFA world record for the common snook is a 53-pound 10-ounce monster caught in Parismina Ranch, Costa Rica. The Florida record in 44 pounds 3 ounces, while the fly-caught record is 30 pounds 4 ounces.

Productive snook flies range from large baitfish imitations, such as Grassett’s Snook Minnows and Clouser Minnows, to shrimp patterns, including the Snookie Shrimp and the Crawshrimp.