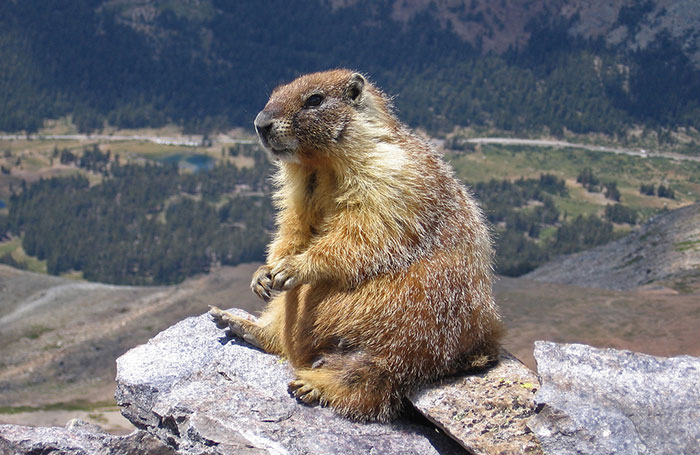 The yellow-bellied marmot: fly fishing’s next frontier?
Photo by Inklein, via Wikipedia

One of my favorite Paul Schullery articles about fly-fishing history is about anglers catching thingsother than fish. The most common “collateral catches” are, of course, bats and birds, and Izaak Walton described how Italian anglers used to catch martins and swallows for meat. But Schullery’s column goes on to describe a hilarious story, “On Dry Cow Fishing
as a Fine Art,” in which Rudyard Kipling accidentally hooked a cow.

In the late 1990s, I worked at a big outdoors event at Camp Hale, high above Vail, with a bunch of guides from a local fly shop. Camp Hale sits in a grassy bowl surrounded by peaks, and it is rife with what the locals called “gophers.” but which are, I believe, a species of marmot. They would pop out of their holes and scurry about as the guides were giving casting lessons, and one ingenious fellow discovered that the little rodents were attracted to the yarn bits tied to the ends of the lines.

Soon, during their brief free time between lessons, the guides were casting to the holes themselves, trying to get a “strike.” This went on for a day or two without success, but one afternoon I heard a yell and looked over to see a guide with his bent rod high in the air—the classic Orvis pose—with the line disappearing down a hole in the ground. Eventually, the marmot let go, and there was much rejoicing.

What other animals have you caught, accidentally or otherwise, with a fly? And how did you deal with the problem?

20 thoughts on “Classic Story: Fly Fishing for Fur and Feathers”