Leonardo DiCaprio and his team of corporate "environmentalists" want to build overwater structures in a conservation zone designated to protect fly-fishing species, their nursing grounds, and in turn the livelihoods of fly-fishing guides who depend on the health of the area. This is not only an action in violation of Belizean law, but an action without regard for those fly-fishermen. The Environmental Impact Assessment for the project has only one sentence in 430+ pages which discusses fly-fishing. Unfortunately, the single sentence which writes that "a few" fishermen use the area undermines the economic and cultural importance of the waters surrounding Blackadore. We decided to seek out "a few" of the fishermen who do use the area, and here's what they had to say:(Don't forget to sign in support of these fishermen here: https://www.change.org/p/government-of-belize-leonardo-dicaprio-living-future-institute-department-of-environment-neac-blackadore-caye-stop-the-overwater-structures-protect-the-environment-public-access)

Actor Leonardo DiCaprio has long had a reputation as an ardent environmentalist, but his proposal to build a vast “eco-friendly” resort on a small Belizian Caye has many fly fishers and locals upset. The plans call for the creation of “the World’s first truly restorative island development – a development completely powered by renewable energy and designed to increase the biological health of species on the island and in the waters around it,” but not everyone is convinced that the world needs another resort for the super-rich. As Dr. Rachel Graham, Executive Director of MarAlliance, told the San Pedro Sun:

I find it unfortunate that they think they will restore the habitat; the habitat is perfectly fine without their efforts. I don’t think the development as it is proposed is good for the environment, nor is it good for the dependent community in this area, and I don’t see how it is going to benefit us greatly. (Click here for the full story.)

Fly Fishers, in particular, protest the loss of good fishing waters and the potential tourism dollars such good fishing represent. In the video above, several guides from El Pescador express their desire to see Blackadore left in its natural state. 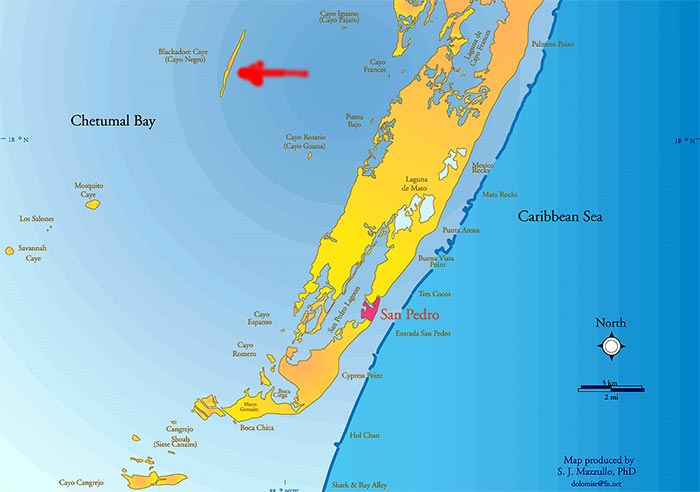 A petition, “Blackadore Caye: Stop the Overwater Structures, Protect the Environment & Public Access,” has been launched on Change.org to collect signatures of those who want to defend the natural beauty of the caye and to protect the livelihoods of fly-fishermen and tour guides who have used the area for decades. Visit the Restorative Islands website to see what the caye will look like after development. Would it be more beautiful than it is in its natural state?